"Thank God, my family is safe!"

Elis, a 30-year-old mother who is seven-months pregnant and was treated by MSF, recounts her experience of the tsunami that hit her family’s home on the coast of Sunda Strait, Indonesia, on 22 December 2018.

As told to Cici Riesmasari, MSF communications officer, in Labuan on 31 December 2018.

“I was taking a bath when the tsunami hit. The weather was too humid for me,” Elis, a 30-year-old mother who is also 7 months pregnant, narrated.

Elis and her family were at home when the tsunami hit the coast of Sunda Strait on 22 December.

Their home was located on the shoreline of Laba Kampong, Cigondang village, Labuan subdistrict, just next door to her parents’ house.

When the first wave hit, Elis’ husband, Purwanto, cried out: “Tsunami! Tsunami!” He shouted a warning to Elis and rushed next door, to get their daughter and Elis’ parents.

“When my husband shouted, I put on my clothes as fast as I could. As he was coming back inside the house to help me, the second, bigger wave hit our house,” Elis recounted.

The strong wave, 7 to 12 meters high and taller than a nearby power pole, destroyed their house and reduced it to rubble.

Purwanto, 35 years old, was injured when his left thigh was hit by the tin roof of their house. Elis was trapped inside the house by a cupboard and desk, and the rubble that was left of their home. 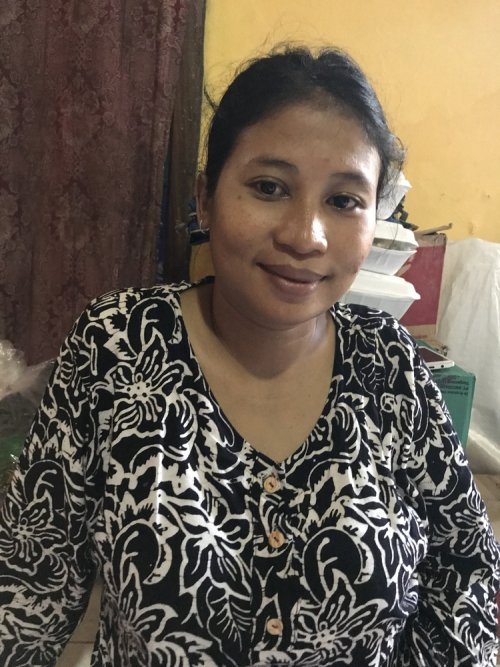 Fortunately, even injured, Purwanto was able to save Elis. However, when they could not find their daughter and their elderly parents, they were forced to walk away from their destroyed home and head to the Labuan health centre, all the while thinking that their family members could be dead.

Elis and Purwanto walked 2 kilometres towards the health centre in Labuan. Along the way, they met a man on a motorbike who offered them a ride.

Once there, they saw a lot of people who were injured like them and awaiting treatment. While waiting, they kept trying to get information about their family.

“That night, we finally got word that our daughter was safe and she was with my sister,” Elis narrated with relief.

The following day, Elis and Purwanto met Elis’ mom and dad who were also injured quite badly. “Thank God, our family was safe despite their injuries,” Elis sighed.

Elis and her husband were treated by the MSF team at the Labuan health centre.

“I met Ibu Dina (the MSF midwife) and Dr Santi at the Labuan health centre on Sunday,” Elis remembered. “They checked my condition and that of the baby. I had bruises with some swelling almost all over my body. But thank God, my baby is okay,” she said with a smile.

The MSF team that attended Elis ensured her medical care. She stayed at the Labuan health centre for the next three days. 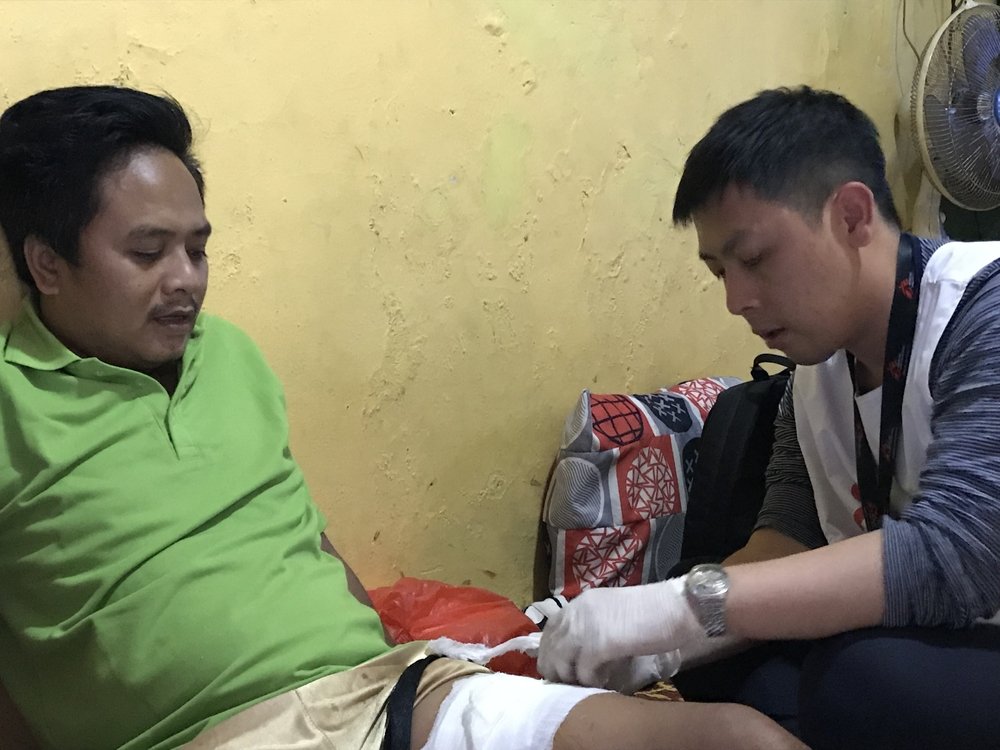 Cici Riesmasari/MSF
Purwanto, 35 years old, is having his wound dressed by Dr Patrick Indradjaja of MSF.

Since February 2018, MSF has been in Pandeglang district working on an adolescent health project in collaboration with the Indonesian Ministry of Health.

Hours after the tsunami hit, the emergency medical team visited and immediately supported the health centres in Labuan and Carita, two of the most affected areas.

MSF has also been operating a mobile clinic to reach evacuation centres, shelters and host communities in Labuan and Carita. Most of the people staying in these areas were not able to access medical services and their injuries from the tsunami remained untreated.

On the eight day of the MSF response, the team visited Elis and her family at the home of her older sister, where they were staying after Elis was released from the health centre and her husband and parents were discharged from hospital.

The team checked the injuries of Elis, Purwanto, and their parents. Their wounds were redressed and their bandages replaced.

“We really want to have a new place soon. I know it is stressful now, but I don’t want my trauma to affect my baby. I am okay now,” said Elis. 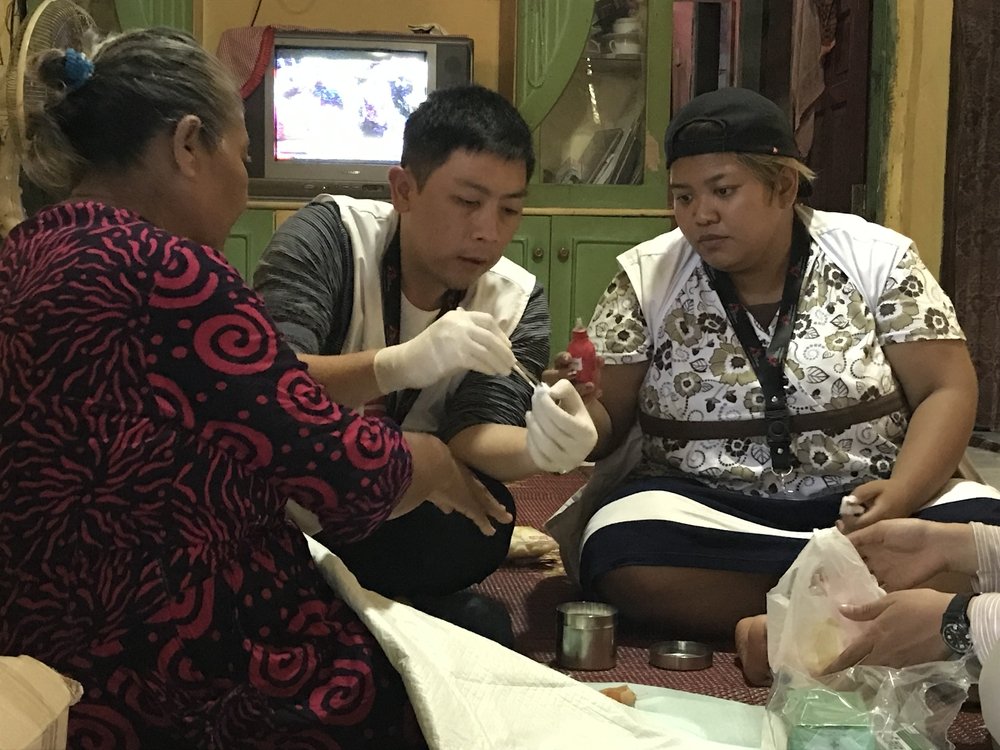 Cici Riesmasari/MSF
Dr. Patrick Indradjaja of MSF (middle) is redressing the wound of Elis' mother (left), caused by the tsunami that destroyed her house on 22 December.

The aftermath of the tsunami

The tsunami affected five districts in Banten and Lampung provinces in Indonesia. Among these, the Pandeglang district was the most affected.

The Meteorology, Climatology and Geophysics Agency (BMKG) confirmed that the tsunami was caused by the eruption of Anak Krakatau volcano, which triggered an underwater landslide.

As of 1.30pm on 28 December, the BNPB reported that the number of displaced people was at 40,386, with more than 80 per cent coming from Pandeglang district in Banten province. The death toll had increased to 426; there were 7,202 injured; 23 people missing; and 1,296 houses damaged.

With MSF’s support, the Labuan and Carita health centres continue their medical services.

The MSF medical team has been providing case management, infection prevention and hygiene management, inventory and other needs assessments in the health centres.

This has been greatly valued support and important to ensure the continuation of care for patients. Plus, the process of referring patients have also been going well, with MSF having contact with the available ambulances in the subdistricts.

As of 2 January 2019, MSF had conducted 472 medical consultations and treatments. MSF has also provided pre- and postnatal care to 20 pregnant mothers and conducted medical follow-ups on 15 patients.

Medicine stocks in the health centres and mobile clinic are now depleted and more are needed to support the ongoing medical services.

An MSF team has been dispatched to assess the needs of those affected by rains and flooding that occurred on 1 January in the kampongs/villages of Cigondang and Sukamaju.

A mobile clinic is already operating and providing medical care to the people in one of the aforementioned kampongs, and it is expected MSF will increase its services on completion of the full assessment.

At present, the MSF team consists of 25 people: doctors, nurses, health promoters, a midwife and a counsellor, as well as logistics, human resource and admin staff. 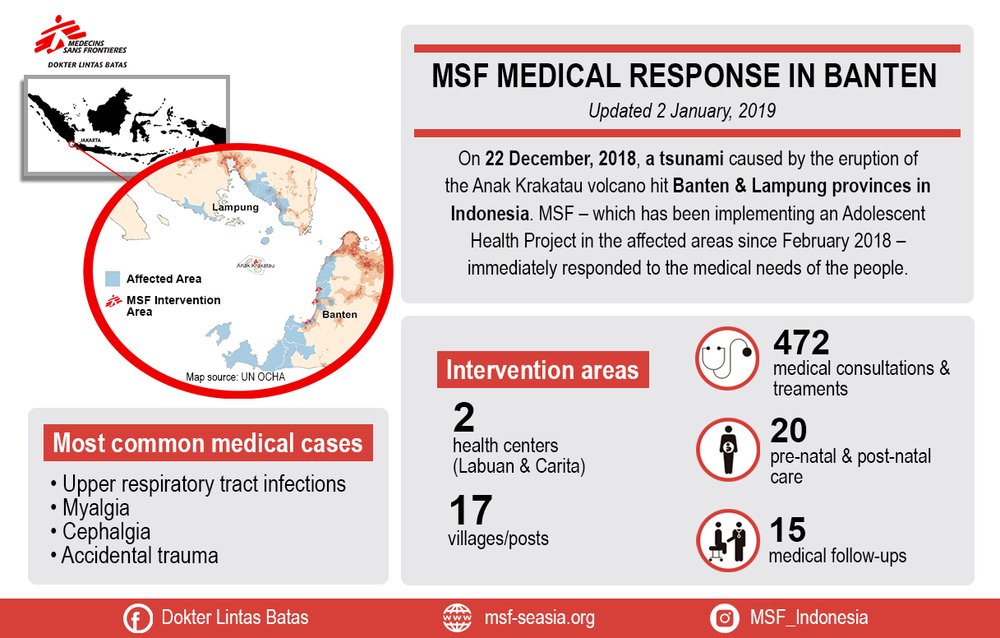 OUR TSUNAMI RESPONSE IN INDONESIA >