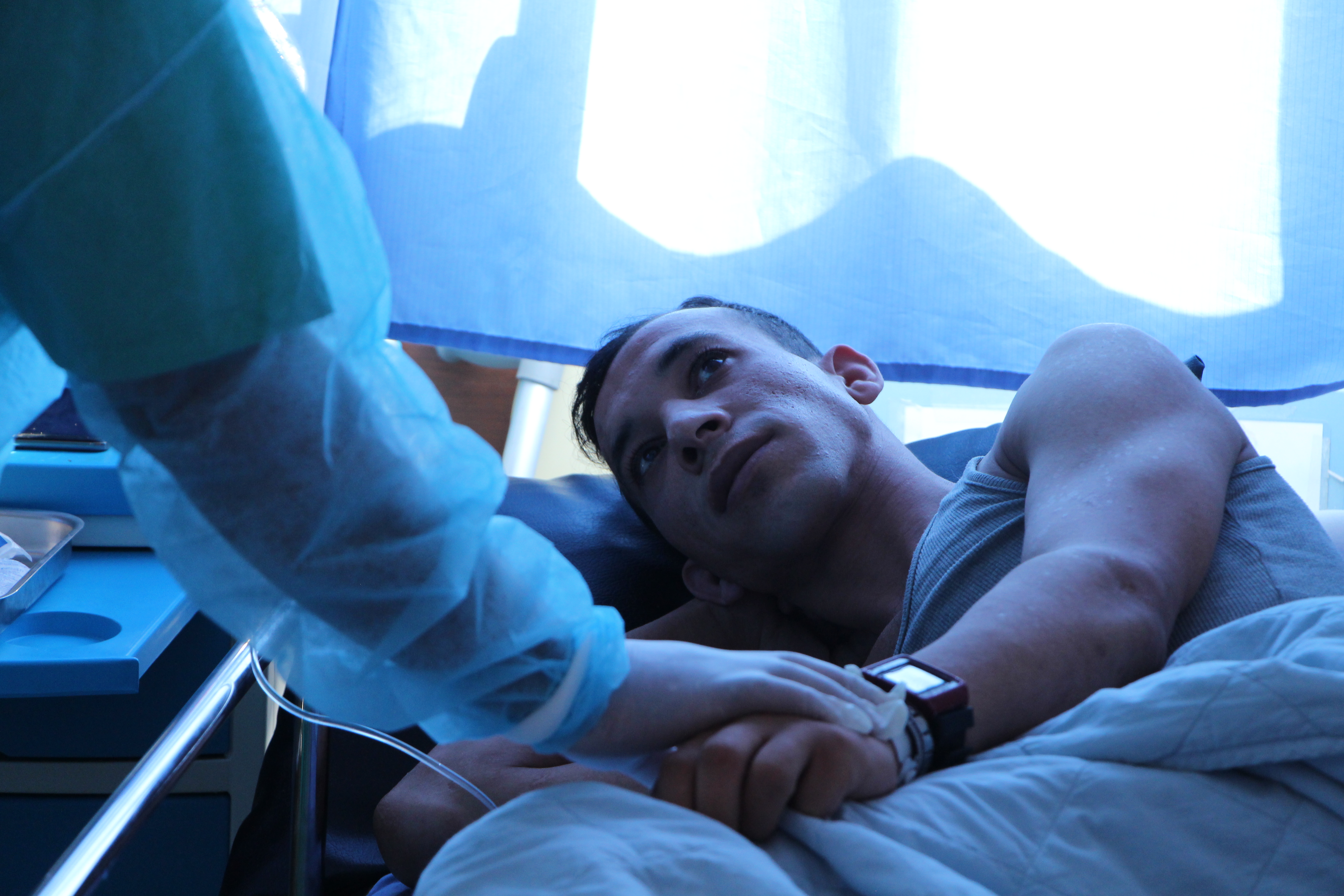 Treating resistant infections in Gaza under the blockade

The room is full of colour now: the walls and second empty bed covered in drawings. A chameleon. Toucans. A turtle. When Ayman woke up, however, the room was bare and the nurse in front of him wore a strange blue gown and gloves.

“I didn’t know about the infection in the bone until I came here,” Ayman says. “I came out of the operation and found myself in isolation.”

Ayman is one of the more than one thousand people in Gaza that MSF estimates are suffering from severe bone infections developed in the aftermath of being shot by the Israeli army.

The demonstrations in which they were shot have been taking place for more than a year now, a weekly routine of bloodshed. More than 7,400 Palestinians have been injured by live ammunition, with around half suffering from open fractures, where the bone is broken near the wound. 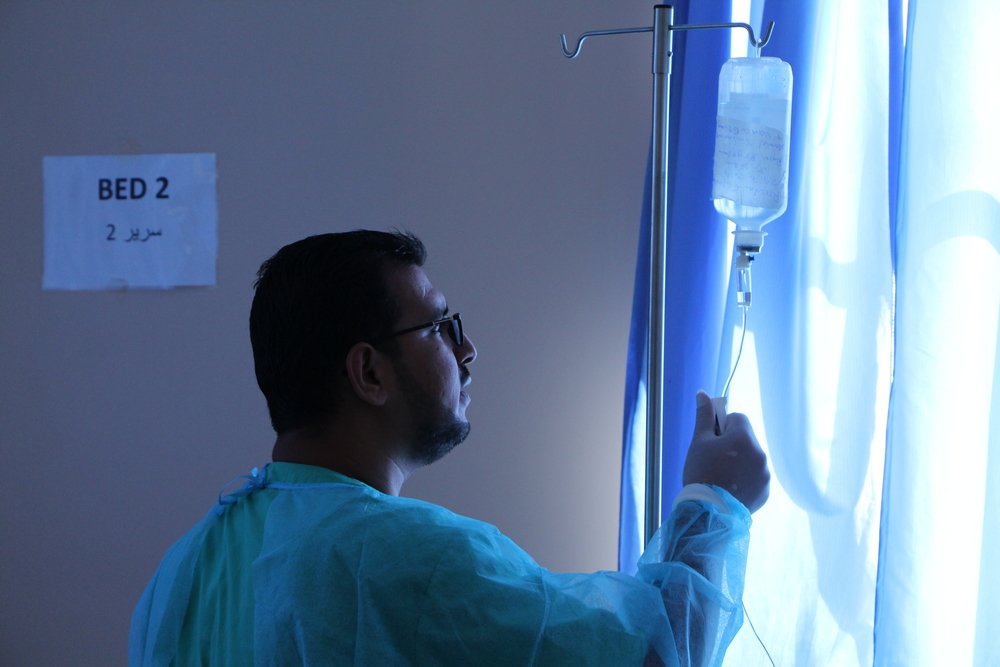 Jacob Burns/MSF
Adeeb, an MSF nurse, checks a drip in an isolation room in a hospital in Khan Younis that is treating people injured during protests at the fence that separates Gaza from Israel.

“When you have an open fracture, you need lots of things to get better: different types of surgery, physiotherapy, and avoiding the wound becoming infected, which is a high risk with these types of injuries,” explains Aulio Castillo, MSF’s Medical Team Leader in Gaza. “Unfortunately, for many of our patients who have been shot, the severity and complexity of their wounds – combined with the severe shortage of treatments for them in Gaza – means they have now developed chronic infections.”

“What’s more, we’re finding in preliminary testing that many of these people are infected with antibiotic resistant bacteria,” says Castillo.

Gunshot wounds by their very nature are prone to infection. With a dirty foreign body breaking the skin, it is vital that the wound be cleaned to lessen the risk of infection. With injuries such as those in Gaza, where the wounds are huge, bones are splintered, and difficult treatment means many wounds stay open long after the injury, the risk of infection is drastically higher.

Complicating this is what appear to be very high rates of antibiotic resistant infections there. These infections have developed an ability to withstand many common antibiotics used to treat them. This often happens because antibiotics have been overused, whether in the community or in the environment, which is a growing problem worldwide.

Antibiotic resistance makes the already difficult task of treating people like Ayman much harder. To get better he needs antibiotics, but with the usual option useless against the resistant infection, he has to take a stronger type that carries a higher risk of side effects. These “heavy-duty” antibiotics are also much more expensive.

In addition, to prevent the spread of the resistant bacteria within the hospital and to protect other patients, Ayman has to be isolated in a single room during the treatment. Everyone entering the room must wear protective clothing and clean their hands. His period of isolation lasts a punishing six weeks. 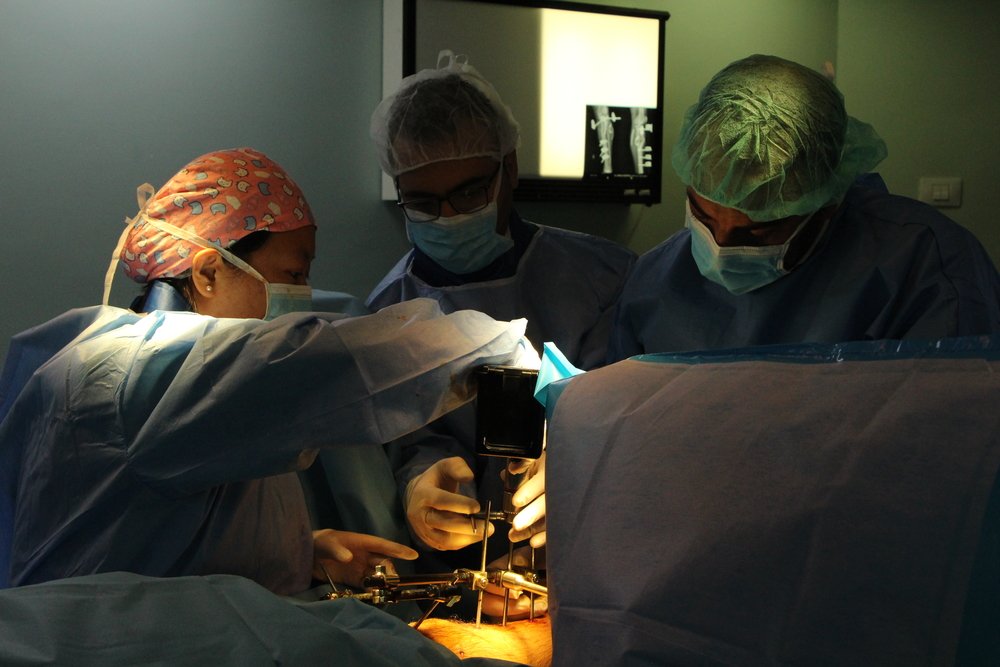 Jacob Burns/MSF
MSF staff in the operating theatre of a hospital in Jabalia, Gaza, as they perform surgery on a patient shot by the Israeli army during protests on August 16 2019.

While patients in isolation are not confined – they can leave the room if they wear protective gowns – it is only natural that the experience is extremely difficult.

“I feel like I’m in prison,” Ayman says. “I don’t like to be by myself. I could stay one year in a normal ward but here… All I like to think about when I’m here is leaving.”

That is why MSF has social workers and counsellors working with patients in the hospitals to support them during treatment.

“After people hear that they must be in isolation they are shocked – they can even start crying,” says Amal Abed, a social worker. “They don’t understand – they think that infection in the bones means certain amputation.”

The psychosocial support team takes the time to sit with the patients, to explain their condition to them, and why it is important they follow the precautions. They also try to create connections between the different patients in isolation, to keep their mood up.

“We have to follow the precautions but we like to get them out of the room to sing, dance, to do an educational session with them and other patients,” Amal explains. “It’s more interesting when education is not done alone: other people can join in with their comments, start a conversation.”

Medical treatment even more difficult under the blockade

Treating these infections would be tough anywhere in the world, but in Gaza it is even tougher. With a health system reeling from the effects of more than a decade of Israeli blockade, Palestinian political in-fighting and Egyptian restrictions on movement, MSF is working to provide care that is otherwise unavailable.

“We have worked with the Ministry of Health to upgrade a laboratory so that it can analyse bone samples, a crucial part of diagnosing correctly these bone infections and knowing which antibiotics will work,” says Aulio. 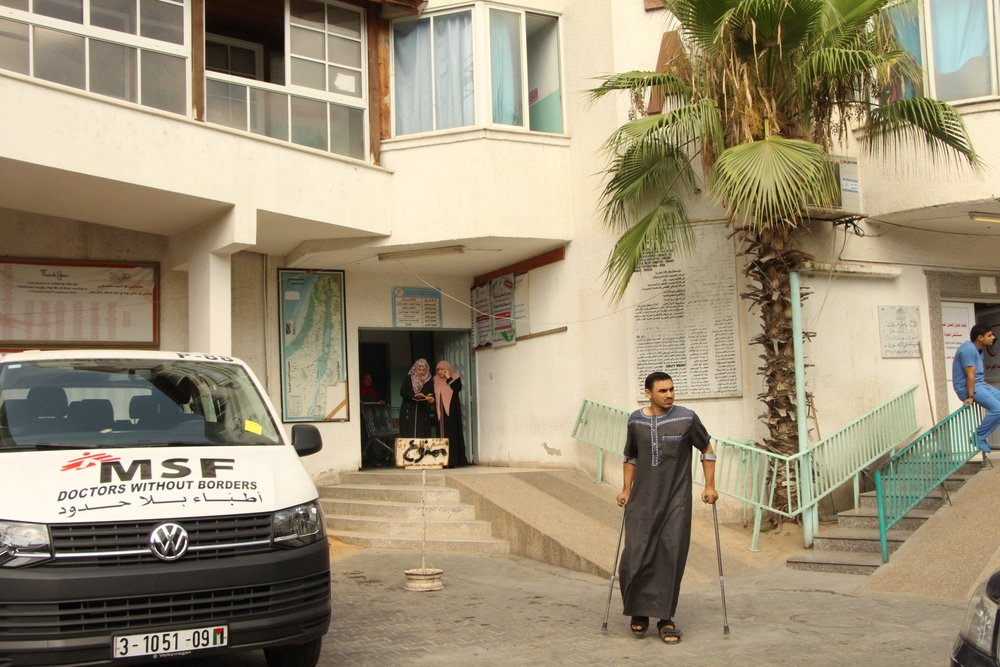 Jacob Burns/MSF
A patient stands outside al-Awda hospital in Jabilia, in the Gaza Strip.

It is the first laboratory able to analyse bone samples in Gaza: previously, each sample had to be sent to labs in Israel for testing. At the hospital laboratory, the staff uses small chunks of infected bone to grow the bacteria they contain in petri dishes.

Different chemical bases let different types of bacteria grow, which show which types are present, and their sensitivity to different antibiotics are measured. It is through this series of essential tests that our teams know which infections they are fighting, and what they can fight them with.

“Treating these infections is a massive undertaking,” says Aulio. “We have upgraded this laboratory, opened two hospital wards and are opening another. It places huge demands on us in terms of the specialist staff we need, the drugs we have to supply and the space we need in order to treat these infections. It’s hard but we’re trying our best to offer these people the surgery and treatment they need.”

Ayman waits for now, taking his antibiotics intravenously for four hours each day, the medical team monitoring to ensure that the infection is being fought and the drugs are not having any adverse effects. He talks fondly of how he and his friends used to hang out together at night to dance and listen to music.

“I want to return to my work as a cake maker,” he says.

To do that he needs further surgery, but he cannot have surgery until he beats the bug. A long and uncertain period stretches ahead of him.

Médecins Sans Frontières (MSF) is dealing with immense challenges while treating many people who have developed bone infections after having been shot by the Israeli army during protests in Gaza, Palestineover the last year. These infections are adding to the already complicated path to recovery that these injured people must tread. Their serious and complex wounds require months – if not years – of dressing, surgery and physiotherapy. Infections prevent recovery, and to make matters worse, many of them are resistant to antibiotics.