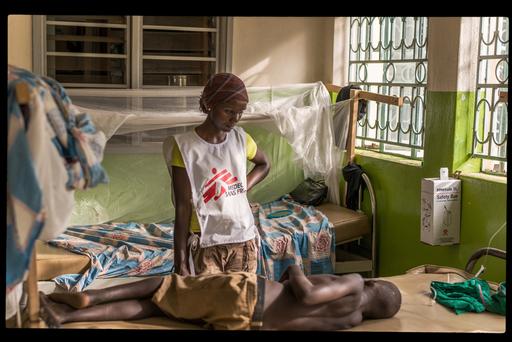 The flow of refugees to Uganda shows no signs of abating. Every day, approximately 300 South Sudanese cross the border to escape insecurity and lack of food in their country. Jump to video.

Since conflict erupted there in December between the army, loyal to President Salva Kiir, and forces supporting former Vice President Riek Machar, more than 66,000 South Sudanese have taken refuge in Adjumani district in northern Uganda.

Upon their arrival, they are housed in the Nyumanzi transit center, which is now overcrowded. The center’s capacity is 3,700, but the refugees today number approximately 10,000.

They must wait there before being transferred to a permanent camp. Ugandan authorities are setting up a new camp where refugees will receive materials to build a hut and a small plot of land to farm, but finding land takes time.

Given the influx at the transit center, MSF has increased its capacity for action to provide more medical consultations, vaccinations (including against measles and polio) and screenings for children suffering from malnutrition. 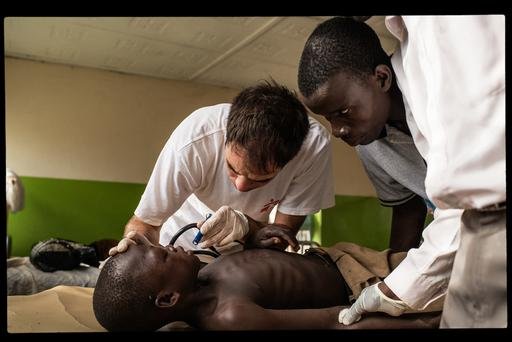 Dr. Chiara Baruzzi, an MSF doctor, recalls one of the malnourished children identified, a three month-old malnourished infant brought by his grandmother in March. The baby’s family had been attacked in South Sudan and both parents were killed.

“The grandmother told me that she fled when her grandson was just six days old. She walked, stopped along the way, and finally arrived in Uganda, three months later. All she had to feed the newborn was sugar water and goat’s milk.”

The baby was hospitalized as soon as he was seen and received intensive nutritional treatment.

Overall, however, “rates of infant malnutrition are not alarming and neither is the health situation,” says Ruben Pottier, MSF’s head of mission in Uganda.

This reflects conditions in both the transit center and the permanent camps in Adjumani, where MSF is working and has set up an epidemiological monitoring system.

Matthias Steinbach
Observation beds have also been installed at the Ayilo health center and pregnant women without complications can give birth there. A facility has been set up in Dzaipi to handle complicated deliveries and provide prenatal care.

MSF is nearly the only medical organization in these refugee camps and must thus handle a large volume of patients.

Between early January, when the projects were launched, and early April, MSF held 20,092 medical consultations and conducted 251 deliveries.

The primary illnesses are malaria (23% of cases) respiratory infections, measles, meningitis and diarrheal diseases.  However, with the start of the rainy season, cases of watery diarrhea and malaria could increase sharply. Jump to video.

Find out more about MSF's work in South Sudan and Uganda