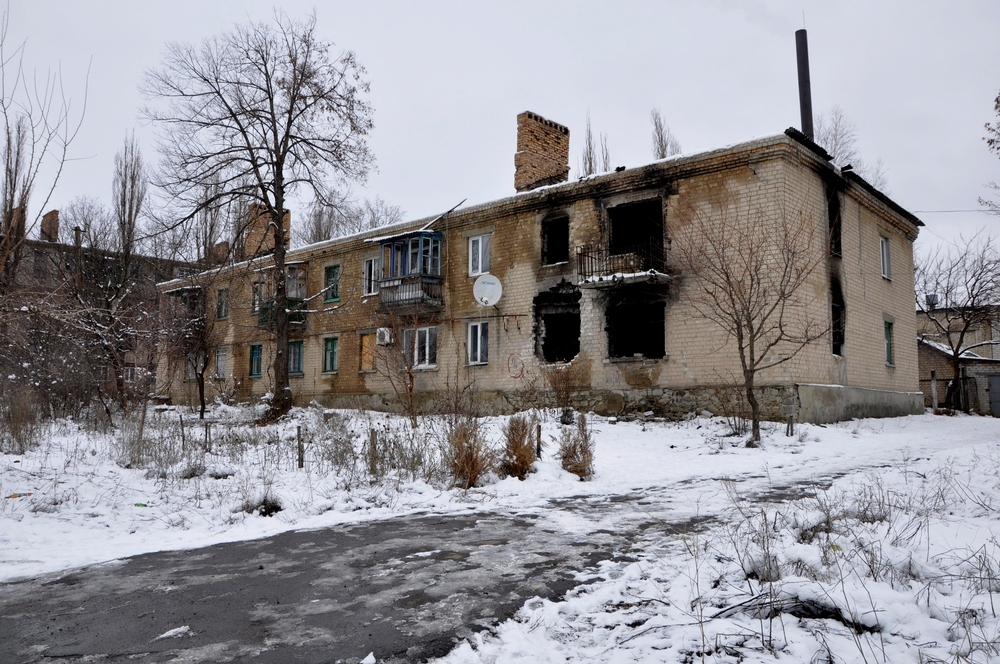 Although fighting in eastern Ukraine has reduced since a ceasefire came into effect on 15 February, shelling continues in some areas and medical needs remain urgent on both sides of the frontline.

Residents and displaced people are living in extremely precarious conditions, many medical facilities have been damaged or destroyed and there are critical shortages of basic and specialised medicines and medical supplies.

In response to the surge in violence since January and the increasingly dire humanitarian situation after ten months of conflict, Médecins Sans Frontières / Doctors Without Borders (MSF) has rapidly expanded its medical activities on both sides of the frontline in the hardest-hit areas.

On 21 February an MSF team was able to reach the heavily affected city of Debaltseve, after weeks of intense fighting made it impossible to provide humanitarian assistance there. MSF had been supporting the hospital in Debaltseve with supplies since September 2014, including sending medicines in January.

“The city has been destroyed,” says Olivier Antonin, MSF’s Emergency Coordinator. “The windows of the houses have been blown to pieces, tree branches are strewn on the ground, and power lines are severed hanging in the wind. The people who remain are living in shelters or in basements of buildings as it’s freezing inside the houses.

There is no electricity, no heating and no running water in town. When we arrived they were in shock, asking where they could find medications or other assistance. Many need drugs for chronic diseases.” 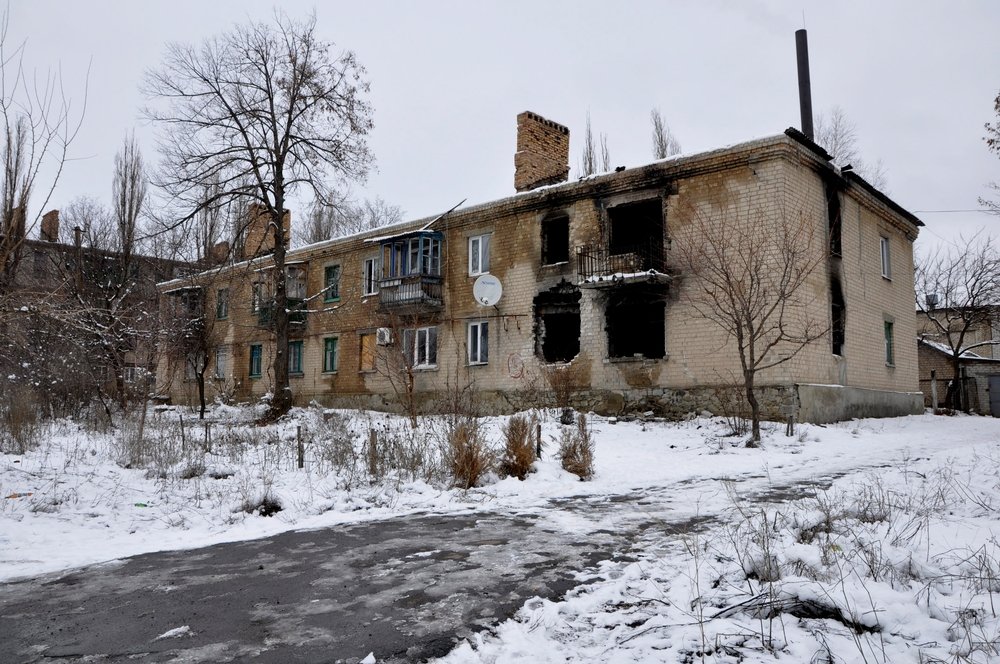 The city’s two hospitals have been damaged, with one unusable. Only three doctors remained for the entire city – the head doctor of the Central hospital and two others working in a clinic located in the ground floor of a building on the main square.

Although many residents have fled or been evacuated, out of a population of 25,000 people before the fighting, at least 5000 people remained and many are in urgent need of medical care. The MSF team provided medical supplies for treating war-wounded, medicines and supplies for basic healthcare, as well as materials such as syringes, catheters, and gloves. An MSF doctor also began providing consultations on 24 February in the city.

Teams are currently assessing the situation around the city of Gorlovka, where an MSF surgeon provided support to Hospital #2 during the most intense period of shelling in January.

A team visited Uglegorsk, east of Gorlovka, on 25 February, where the hospital has been shelled. Two days later, they began mobile clinics and mental health activities, and this week will distribute essential relief items to 1000 families in the city and surrounding villages. 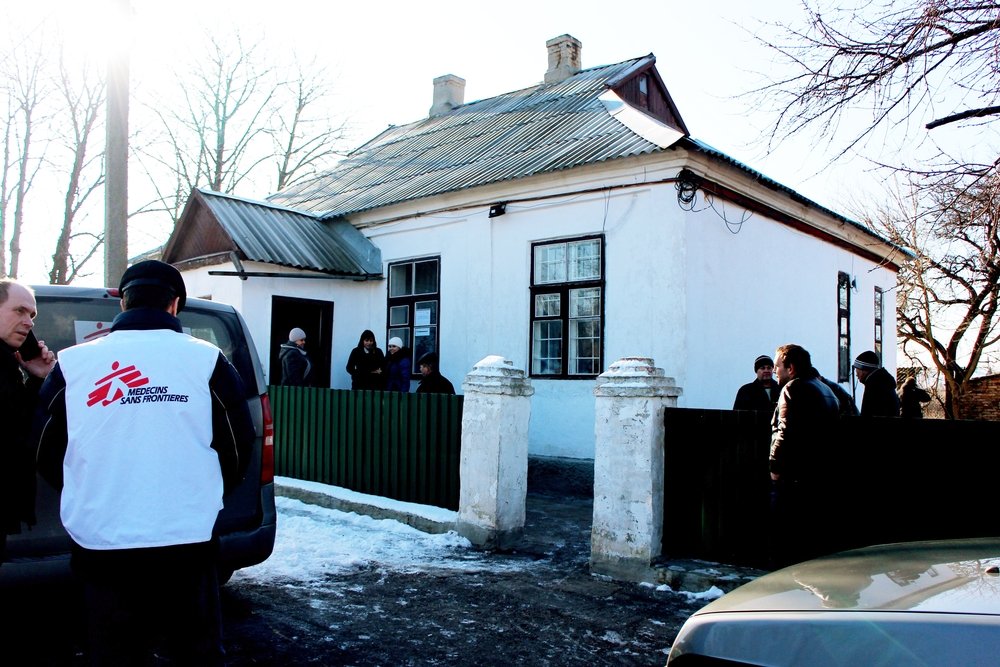 Corinne Baker/MSF
People outside the mobile health clinic in Kuteynikovo, one of three small towns south-east of Donetsk, where MSF is running mobile clinics twice a week.

MSF has started running mobile clinics in 19 locations in Donetsk and Luhansk regions to provide basic healthcare to people living in rural areas or displaced by the conflict. In just the first three weeks, MSF doctors carried out more than 1500 consultations, illustrating the huge need for healthcare and medicines in these areas.

MSF is running a mobile clinic in four sanatoriums in Svyatogorsk where more than 3000 people fleeing the conflict zone have taken refuge, many since the escalation in fighting in January. 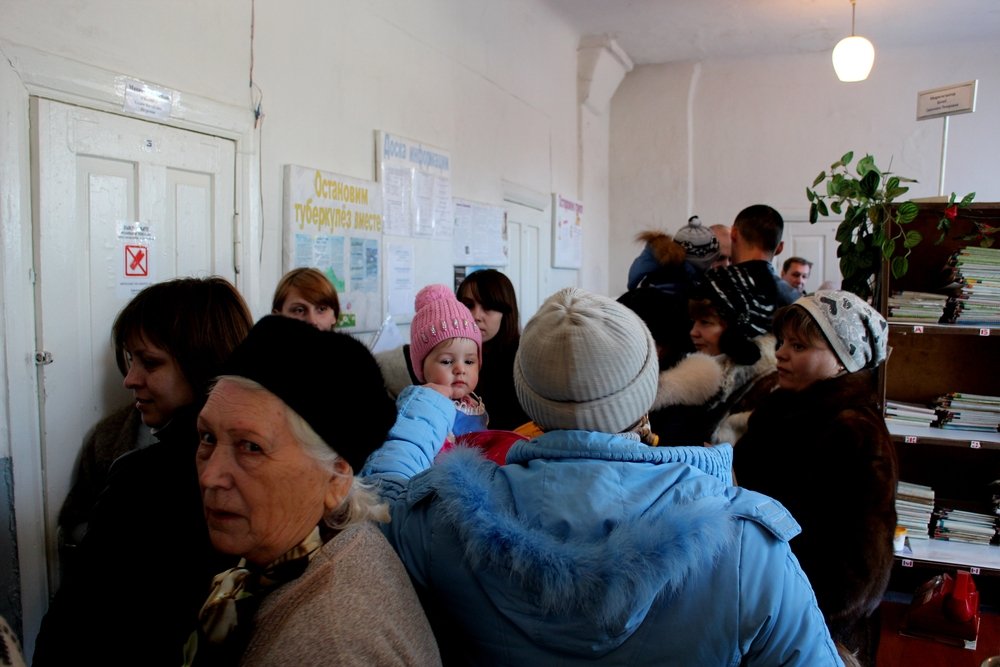 Corinne Baker/MSF
People crowd in the waiting room of the health clinic. In just the first three visits to Kuteynikovo, the MSF doctor provided 340 consultations, indicating the huge need in this area for basic healthcare and medicines.

With medical supply lines in the east of the country severely disrupted or cut entirely since last summer, and health facilities located in rebel-held areas not included in the 2015 Ukrainian government health budget, people now face a critical shortage of medicines.

Banks have been closed and pensions have not been paid for many months, so people have been delaying going to see a doctor simply because they cannot afford the cost of transport or medication. The price of medicines has increased significantly and even basic medications such as painkillers are out of reach for people.

Patients with chronic diseases are particularly affected, with the majority of MSF’s patients in the mobile clinics needing treatment for heart disease, hypertension, diabetes or asthma. 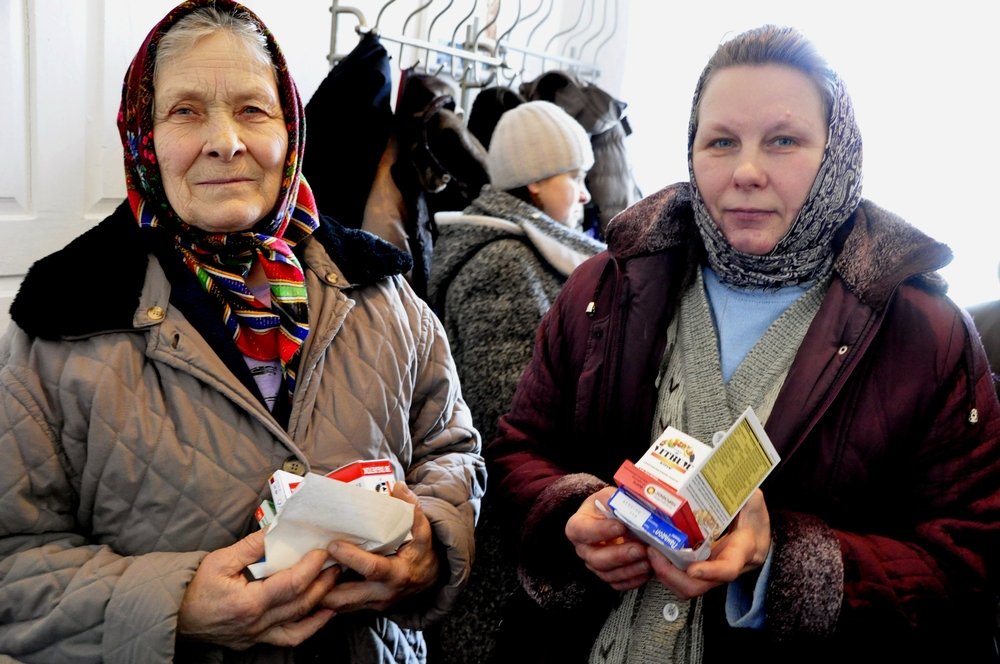 Andrea Ciocca/MSF
Patients have just received their medications after a consultation with MSF’s doctor at the mobile health clinic in Kuteynikovo. With medical supply lines in the east of the country severely disrupted or cut entirely, and health facilities located in rebel-held areas not included in 2015 budgets, there is a serious shortage of medicines.

The humanitarian situation is particularly alarming in Luhansk region as the shortage of medicines and essential supplies, including food, is even more acute.

Most people who have remained in Luhansk are the most vulnerable members of the community – the elderly, disabled, and sick – who did not have the means to flee the conflict.

As well as running mobile clinics in health centres in rural areas, the MSF team is also supporting social facilities, including hospices for the elderly, disabled, orphaned, and people with psychiatric disorders, by providing consultations, medicines and hygiene materials. 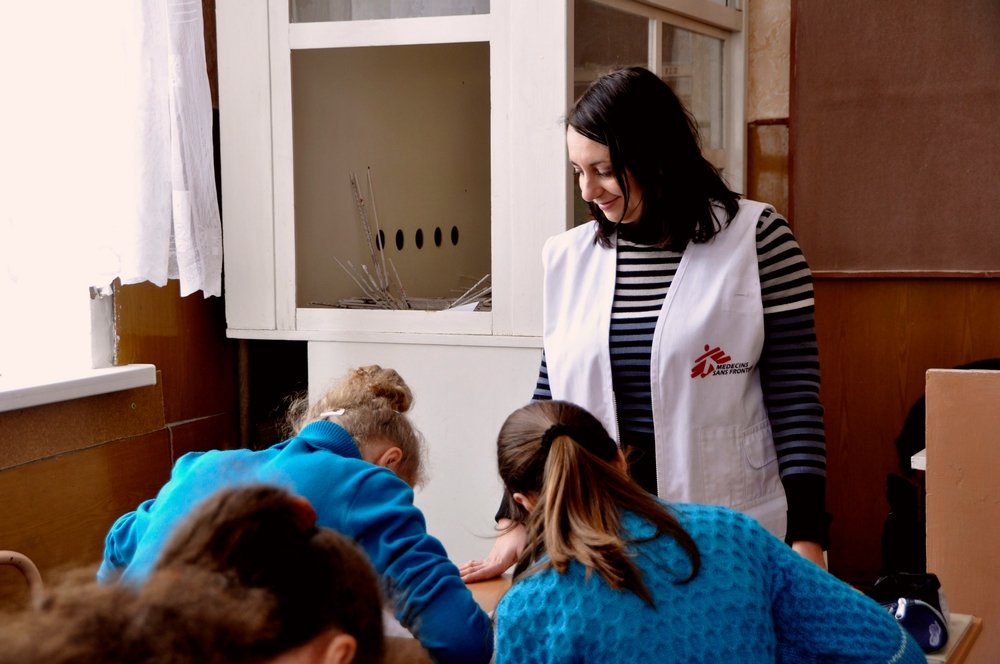 Corinne Baker/MSF
MSF psychologist Tanya Novosyolova during a group session with 8th grade children at the school in Ilovaisk, Donetsk region. MSF visits the school once a week to run sessions and activities with the children in different grades. The psychologists help them talk about their fears and dreams and do relaxation exercises in which the children imagine themselves in a safe place. When asked what they wished for, every single child in this class said "peace".

Since May 2014, MSF teams have provided medical supplies to around 100 medical facilities on both sides of the frontline in Donetsk, Luhansk and Dnepropetrovsk regions, enough to treat more than 15,000 wounded patients, 1600 pregnant women and 4000 patients with chronic diseases.In January 2015, MSF began providing basic healthcare through mobile clinics in rural and conflict-affected areas and to people displaced by the conflict.