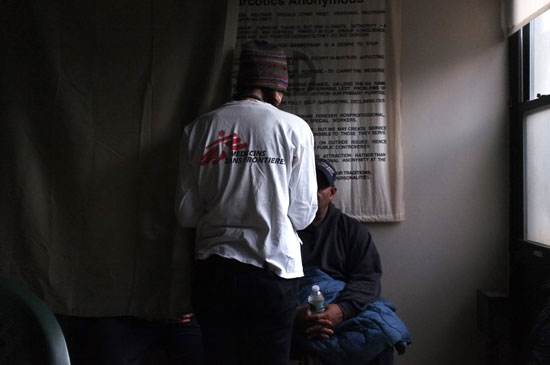 Médecins Sans Frontières/Doctors Without Borders (MSF) teams, working alongside local community groups, are providing medical and mental health care to Hurricane Sandy-affected communities in the New York City boroughs of Brooklyn, Queens, and Staten Island, as well as Hoboken, New Jersey. The vast majority of the patients treated by MSF in the shelters and underserved communities have been elderly, homeless, or physically or mentally impaired.

USA 2012 © Michael Goldfarb/MSF
An MSF doctor conducts a medical consultation with a resident at a makeshift clinic opened in Far Rockaway, Queens. MSF teams are going door-to-door in apartment complexes in Far Rockaway alongside volunteers from various community groups, including Occupy Sandy Relief and Far Rockaway Youth Task Force, to assess the medical needs of residents who live in apartment buildings in the area. Many elderly residents have been without heat or power for over a week. USA 2012 © Michael Goldfarb/MSF

A team of two doctors, nurse-practitioner, mental health specialist, nurse, and logistical-support staff have established a temporary clinic in a community room in a housing complex in the Arverne neighborhood of Rockaway, Queens. The medical team has treated 50 patients, most suffering from pre-existing conditions like hypertension, asthma and congestive heart failure. In the clinic, there have been routine prenatal consultations for several pregnant women.

The team has also been going door-to-door in high-rise apartments, alongside volunteers from various community groups, to conduct medical consultations with residents who have been without electricity since October 29, and who have had limited access to heat and water. The community groups, through volunteers, are carrying water and other supplies to residents of the buildings, including a 22-story apartment building.

Many of the residents visited are suffering some form of paraplegia, obesity or dementia, and have not been able to seek outside assistance since the hurricane hit. Several elderly patients have also received care by home visits.

At the evacuation center located at FDR High School in Brooklyn, where 866 people have sought shelter, MSF has ensured consistent 24-hour medical care and coordination with physicians and registered nurses since November 1. The medical team has tended to 247 people, the majority of whom are suffering from upper respiratory tract infections, high blood pressure, diabetes, or psychological trauma. MSF is helping patients to secure refills for various prescription medications. The team has referred 10 patients to local hospitals for emergency care and transported several wheelchair-bound people to their homes.

Since assessing the evacuation center at Susan E. Wagner High School on November 2, MSF medical and mental health teams have been providing support to the onsite response team, which has worked tirelessly since the hurricane to tend to the needs of their patients. The shelter houses approximately 385 people, with one-third of the population being under the age of 18.

At the shelter, MSF has provided a prescribing physician and organized a medicines procurement system with a local pharmacy that has been donating medical material and prescription medicines for evacuees. As a result, approximately a dozen individuals who have lost access to their prescription medicines for hypertension and other chronic conditions have received medication. MSF has also donated blood-sugar rapid diagnostic testing kits for diabetic patients and nebulizers and medications for patients suffering from chronic respiratory conditions.

A two-person mental health team has provided therapy to several people exhibiting signs of mental trauma in the shelter. The team has also set up a recovery room for first-responders suffering from exhaustion after working multiple shifts without relief. The team has also conducted a training session for social workers and psychologists from Wagner High School to take on mental health services for people living in the shelter.

On Saturday, November 3, MSF dispatched a doctor, nurse, and mental health specialist to Hoboken to assess medical and psychosocial care needs in the city. The team has been providing the only medical care in three shelters: Wallace public school, St Matthew’s church, and Saint Peter and Paul. The team has also assessed several nursing homes in the area. Since Saturday, the team has conducted 60 medical consultations and 87 mental health counseling sessions. MSF has arranged for prescriptions to be refilled for 48 patients.

Over the past twenty years, a large proportion of MSF’s financial support has come from donors from communities in New York and New Jersey that have been affected by Hurricane Sandy. Hundreds of field staff and thousands of donors have given their time, professional expertise and financial support to help people beyond their own borders. We thank them and want them to know our thoughts and efforts are with them at this time.

MSF provides medical humanitarian assistance in more than 60 countries to people whose survival is threatened by violence, neglect, or catastrophe, primarily due to armed conflict, epidemics, malnutrition, exclusion from health care, or natural disasters.