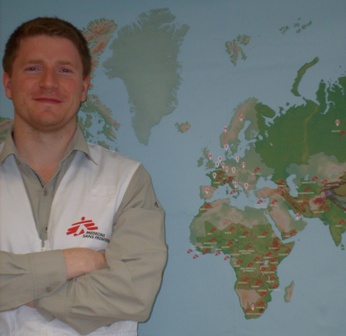 What I did today

This article appeared in the Irish Independent on November 22 2010.

'Years ago, I remember reading 'Under the Hawthorn Tree' by Marita Conlon-McKenna in primary school. It was about the Great Irish Famine. In the book, starving children fell asleep, never to re-awake.

"Now almost 20 years later, I spend my day looking into the faces of children who have not eaten properly for months. I am in Bokoro, Western Chad, a place where food is a scarce commodity.

"As a student I spent some time working in a township hospital in South Africa. Although conditions in the township were far from perfect, they now seem palatial compared to what the people of Bokoro have to deal with.

"Here, in a small tent hospital, I look after children who are severely malnourished. This week, among the many admissions, a young mother arrived with twins. They were six months old, a girl and a boy. The mother was tall and striking, like most Chadian women, but she looked weak. She had not eaten in a while.

"The twins were a haunting sight. Tiny skeletons wrapped in a fine film of skin. Their hair, brownish in colour, fell out too easily when touched. I struggled to remain composed as I examined them. I could see their small chests rise and fall with the breathing cycle. They were fighting for life. Where they got their energy from I don't know.

"The little girl had a severe chest infection, the little boy was suffering from aggressive malaria. Both were severely malnourished. We gave them antibiotic and anti-malarial medications. We provided specialised therapeutic food developed for malnourished infants.

"Their battle to stay alive in this world was an amazing sight. The mother held her twins all day, all night.

"They were inseparable, each twin keeping the other alive in conditions that must be among the harshest on earth.

"On the third day of the twins' admission, I was opening a new box of antibiotics for them. I looked at the label -- 'Made in Roscommon, Ireland'. Here in the middle of a desert in the heart of Africa, Ireland was providing something very useful to an impoverished people.

"I wish I could tell you both twins survived. The baby girl recovered, but four days after arriving at the hospital, the little boy died. The mother softly kissed his forehead and holding him in her arms released a scream that scared everybody. The nurses were crying. I was numb. We all continued with the job.

"Four more infants with their mothers were waiting to be seen. One of them unnerved me; he looked impossibly thin and was not making any noise. These children must be the most forgotten of our time.

"So far this year, MSF has admitted more than 21,000 severely malnourished children to our feeding centres across Chad, a country more than 15 times the size of Ireland. The food crisis has been compounded by torrential rains this summer that have destroyed crops, flooded wells and cut off villages.

"When a person's -- especially a child's -- immune system is already weakened by malnutrition, a whole host of diseases attack more aggressively.

"Here in Bokoro, we are now in the so-called seasonal 'hunger gap', those precarious few months when last year's food stocks have already been consumed and the new harvest has yet to come in. We expect the number of children arriving at our hospital in a critically ill state to only increase.

"At home, the debate about the rights and wrongs of aid for the developing world continues. I will not pretend to have enough experience to offer concrete solutions but I can say with certainty, having seen it first-hand, it is not right for a child to die from hunger."

Dr. Gabriel Fitzpatrick was appointed Chairperson of Médecins Sans Frontières Ireland in January 2014.  In July 2014, he departed for Sierra Leone to join the emergency team responding to the Ebola outbreak in West Africa.