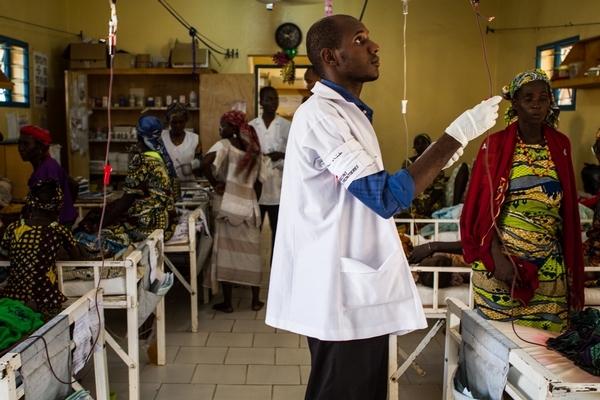 World Food Day: How to start a Child Survival epidemic

As World Food Day approaches, Dr. Susan Shepherd, a paediatrican and a nutrition coordinator with MSF looks to a success story in the fight against childhood malnutrition

Bringing your infant to the doctor for a well-baby check up and shots may seem like just another chore. Who do you know who ever had measles? Many parents wonder if all those shots are really necessary in the first place. But last week, mothers, nurses and doctors in Niger reminded me just how powerful and important these simple gestures are.

I'm just back from Madarounfa, the southern-most district in central Niger where Médecins Sans Frontières/Doctors Without Borders (MSF) has worked for more than a decade. Yes we still treat too many malnourished children and care for those ill with malaria or other common illnesses. But there's a new thing going on. Thousands of mothers and infants cheerfully come to the health centre every month for weight checks, immunization updates, and, once the baby reaches six months of age, to receive nutritious baby food as a complement to breastfeeding. As mosquito nets are distributed to the newborns, nurses and mothers engage in lively exchange about how to care for a sick baby and how to feed children so they stay well.

Niger is a land-locked country that straddles the Sahara Desert and the savannah just to the south, known as the Sahel. For most Nigeriens, daily life presents many challenges and struggles. The country has been through three food emergencies in the past six years, and this in a country where the vast majority of its 16 million people work the land to make a living. In 2010, almost half the country's population received some type of short term economic support in the form of food distribution or cash transfer and this year the same help is going to about one quarter of all Nigeriens.

But among all this hardship, Nigerien politicians and health professionals are making remarkable progress in child survival. Despite being ranked near the bottom of the U.N. Development Index, child mortality rates in Niger are in free-fall and dropping twice as fast as its bigger, wealthier neighbour Nigeria. Even with serious economic woes, child malnutrition rates are actually improving. This flies directly in the face of the conventional wisdom that suggests improvement in health indicators only follows economic growth.

So what is happening in Niger? In 1990, Miger had the highest child mortality rate in the world.   By the end of the decade, the government started to promote vaccination campaigns along with vitamin A distributions.  A positive step, but then 2005 happened.

As so often happens in the aftermath of a crisis, a number of very positive changes emerged. Since 2005, more children have been treated for malnutrition in Niger -- estimates of over 1 million -- than anywhere else in the world. In other words, children in Niger have a better chance of receiving the treatment they need than in any other country in Africa or Asia where malnutrition takes the highest toll.

Nutrition and health are inextricably linked: children are more prone to sickness and death if they are malnourished, and vice versa. Malaria in Niger, for example, is a major cause of illness and death, so it is unthinkable to treat children for malnutrition without simultaneously checking for malaria, or distributing insecticide-treated bed nets. Since 2005 the number of cases of malaria treated in children under five has more than tripled, in 2009 reaching more than 1.5 million treated with appropriate medications. Expansion on this scale was possible because national politicians decided that health care must be provided free of charge for children under five and the Global Fund aided with supply of drugs.

Much of this progress was set in motion via decisions made by Nigerien leaders; some of it was accelerated by humanitarian actors and Nigerien health professionals working on the ground. This conglomerate of governmental and emergency aid organizations has laid the groundwork for revitalizing this most important activity: well-baby visits.

Breast-feeding, a healthy diet and treatment for acute malnutrition, completed immunizations, malaria protection and treatment, and good data collection are the backbone of this success. Yet all this really isn't rocket science. The hard part is figuring out how to keep the system working, because this progress is fragile. While enabled by good policy, a lot of the health gains can be traced to investments by emergency aid organizations, whose funding is neither stable nor predictable. The next critical phase will be integrating the connection between nutrition and health into public health systems and reaching children earlier with interventions that work. It should be about improving children's health as much as an emergency response.

Dr. Susan Shepherd is a paediatrician who has worked for Doctors Without Borders/Médecins Sans Frontières (MSF) for the past six years.  She has worked in Uganda, Chad, Niger, Kenya, South Sudan, Burkina Faso, and Ghana.