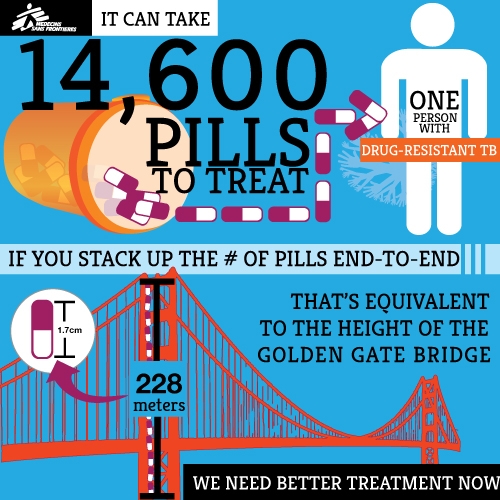 If measures to tackle multidrug-resistant tuberculosis (MDR-TB) are not significantly stepped up, MDR-TB rates will continue to increase worldwide and a historic opportunity to improve abysmal cure rates will have been squandered, the medical humanitarian organisation Médecins Sans Frontières/Doctors Without Borders (MSF) warned today.

Image Caption
In a public manifesto launched today, people living with TB and MSF medical staff from around the world demanded that two new drugs effective against MDR-TB be used to make treatment much shorter, more effective and less toxic.  Read the ‘Test me, treat me’ manifesto and see who signed it at: msfaccess.org/TBmanifesto.  The manifesto also calls for treatment scale-up, and measures to address barriers that prevent research into better drug combinations.

"We have been waiting for half a century for new drugs that are effective against tuberculosis." said Dr. Erkin Chinasylova, TB doctor for MSF in Swaziland.

Must we wait another fifty years to seize this historic opportunity to improve and roll out treatment for drug-resistant TB?

Getting better treatment is beyond urgent, but we are not seeing anything like the level of prioritisation required to make this a reality.”

MSF projects are seeing unprecedented numbers of people with MDR-TB around the world, with drug resistance found not only among patients who have previously failed TB treatment but also in patients newly diagnosed with TB – a clear sign that MDR-TB is being transmitted in its own right in the communities in which we work.

Left untreated, the infectious disease is lethal, but treatment today puts people through two years of excruciating side effects, including psychosis, deafness and constant nausea, with painful daily injections for up to eight months. Barely half of people get cured.

After close to five decades of insufficient research and development into TB, two new drugs - bedaquiline and delamanid - have recently been or are about to be approved. Research is urgently needed to determine the best way to use these new drugs so that treatment can be made shorter and more effective, and rolled out to treat the growing number of people with MDR-TB.

People on MDR-TB treatment and their caregivers from around the world outline these and other demands in the Test me, treat me manifesto, and urge others to join their call for urgent action.

“It’s 2013 and I’m beginning a fourth year of living with TB, when I should be in my fourth year at university,” said Phumeza Tisile, a 22-year-old woman who receives treatment for extensively drug-resistant TB from MSF in Khayelitsha, South Africa, and is one of the signatories of the manifesto.

“I’ve swallowed around 20,000 pills and received over 200 daily painful injections since I started treatment in June 2010, and the drugs have left me deaf. I wish I could take just two tablets a day for a month or so and be cured.”

High price of medicine to treat drug-resistant TB
The number of people receiving MDR-TB treatment globally remains shockingly low, at less than one in five. Greater political and financial support from the international community is needed to address this gap.

“Right when TB should be the global priority, the trend we’re seeing is that it is being deprioritised.  This is unacceptable,” said Dr. Manica Balasegaram, executive director of MSF’s Access Campaign.

The Global Fund provides about 90% of international support for TB, but it has recently reduced the share going to the disease.  Ahead of a key replenishment meeting later this year, donors must ensure the Fund is adequately financed so that countries have the support they need to strengthen the MDR-TB response.

With better treatment on the way, affected countries should scale up efforts to diagnose and treat MDR-TB today, so that robust programmes are in place once the new drugs are introduced.