The year 2020 was extremely challenging for people all over the world, as they experienced extraordinary levels of disease, loss, fear and isolation due to the COVID-19 pandemic and its consequences. In many countries where Médecins Sans Frontières (MSF) works – and some in which we normally don’t – the pandemic exacerbated existing healthcare issues caused by conflict, displacement and poverty. In one of the most demanding years in our almost half-century of providing assistance, our teams worked in nearly 90 countries to respond to COVID-19 and other emergencies, violence and disease outbreaks, that were made more complex by the pandemic.

Although the COVID-19 pandemic was ever present, it was a secondary problem for many people in the countries in which we usually work.

People continued to die of malaria, malnutrition and other diseases, often for lack of available healthcare. Vaccination campaigns were cancelled, and travel restrictions prevented people from reaching clinics.

While responding to COVID-19, we also focused on maintaining access to healthcare and helping to prevent health systems from being overwhelmed. 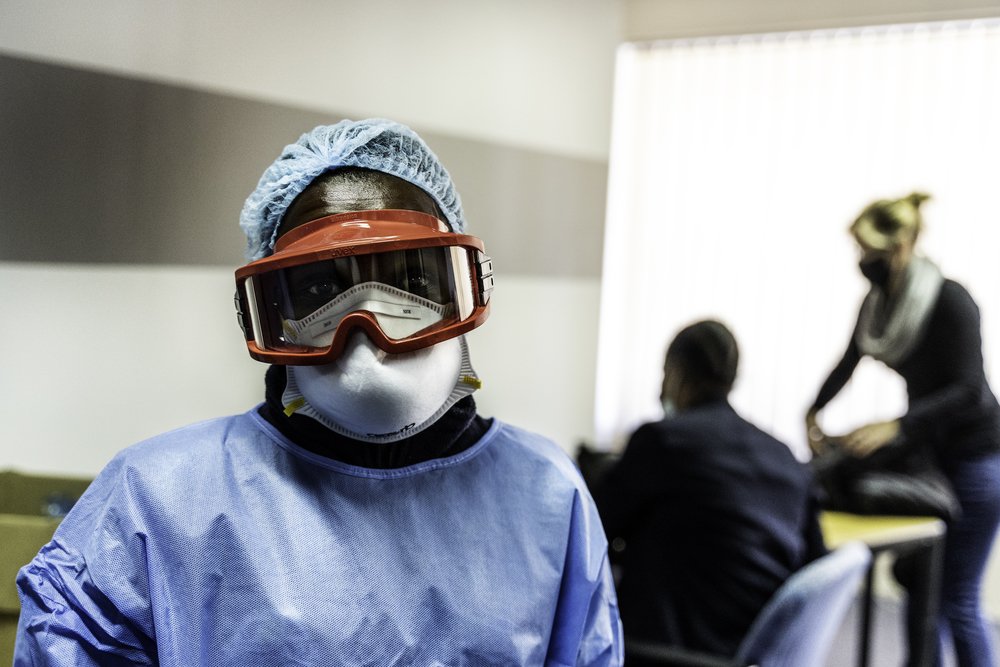 Tadeu Andre/MSF
A health worker in PPE is seen at a mass COVID-19 screening and testing which took place in Johannesburg, South Africa where MSF assisted in swabbing people and training health workers on how to properly swab people. South Africa, 2020.

We fought to continue our day-to-day work, working to avoid the ‘ripple effect’ of illness and deaths from other diseases.

For example, we largely managed to maintain our HIV, hepatitis C and tuberculosis programmes, with adapted protocols and alternative approaches to provide treatment, while protecting patients and staff from COVID-19.

In other cases, we tried to close gaps in healthcare.

Staff in our Nablus maternity hospital, in Mosul, Iraq, increased capacity when other facilities in the city closed because of COVID-19.

However, in some places the pandemic forced us to suspend activities; in Pakistan, our treatment programme for cutaneous leishmaniasis was put on standby, and a maternity hospital closed for two weeks when many staff became sick. 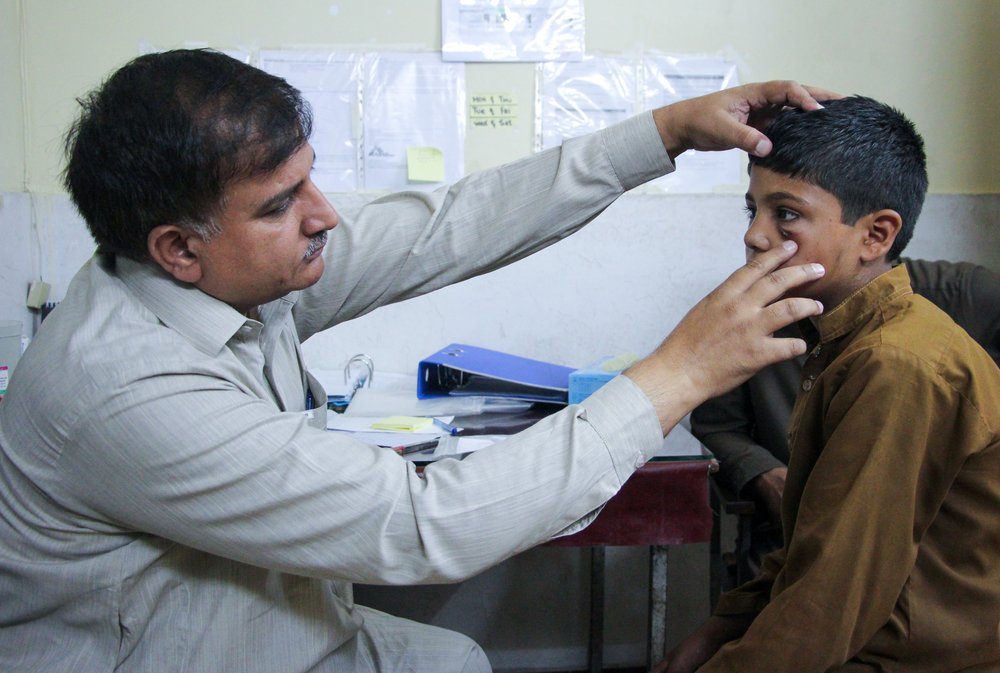 In February and March, as borders and airports closed, it became increasingly difficult to move supplies and staff to our projects.

The scramble to find scarce personal protective equipment (PPE) in early 2020 made it hard to ensure staff and patients were adequately protected, and highlighted glaring inequalities between wealthier and poorer countries. 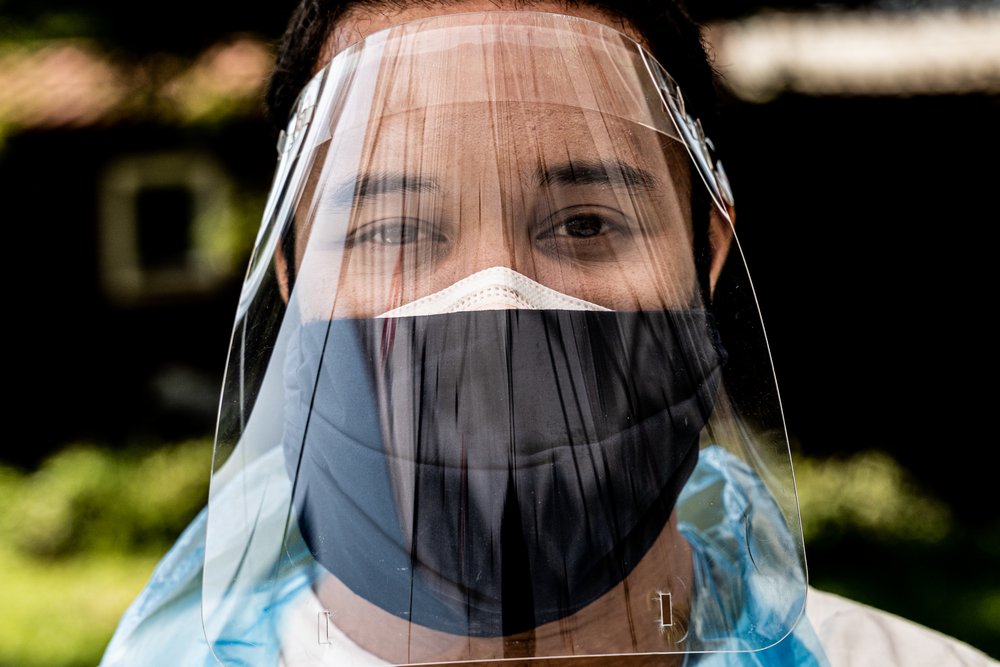 Although our fears of the virus overwhelming the most under-resourced health systems weren’t realised, the countries we work in were not entirely spared.

Our teams treated patients with severe COVID-19 in Haiti, South Africa and Yemen, for example.

In Yemen, we ran the only two COVID-19 treatment centres in the city of Aden, managing huge influxes of patients in critical condition, often with insufficient ventilators for patients and PPE for staff. 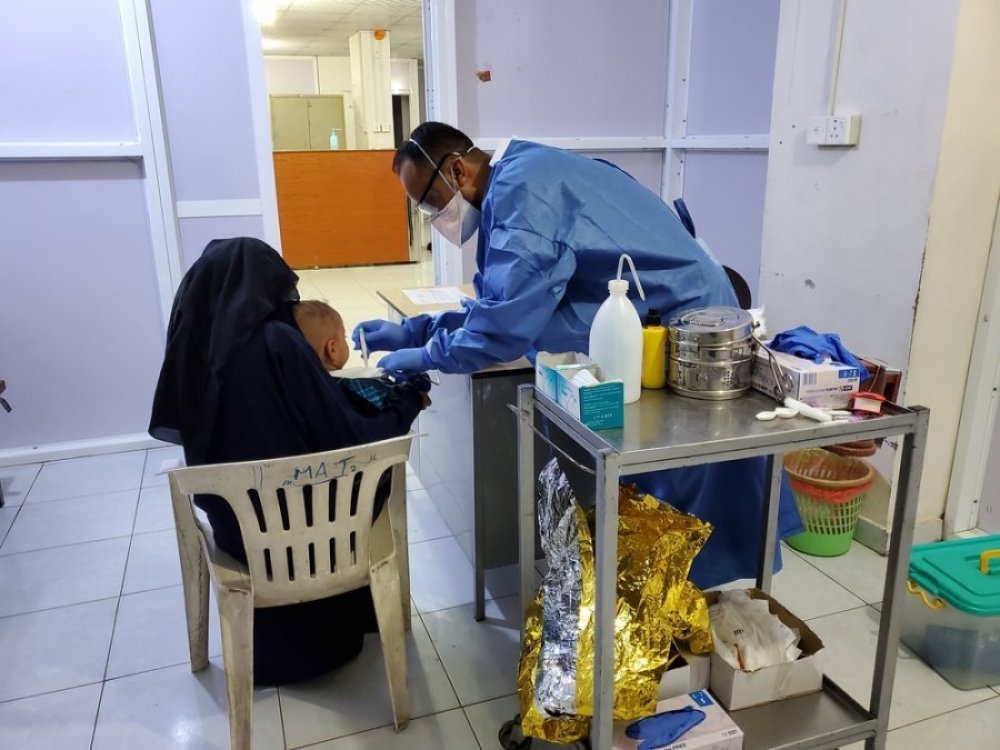 An MSF medic wearing PPE examines a baby's temperature at a medical centre in Taiz. Yemen, 2020.

Meanwhile, our teams found themselves working in wealthy countries – in some cases for the first time – to bridge a knowledge gap in outbreak response.

In Europe and the US, we assisted vulnerable and marginalised groups of people whom the authorities had forgotten, if not abandoned.

Among these groups – including the elderly, the homeless and migrants – the rates of the disease soared.

In Spain, Belgium and the US, we focused on responding in communal living facilities, including nursing homes; in France, we found infection rates of 94 per cent in a workers’ hostel in Paris.

We worked with the homeless and migrants in many countries, including Italy, Switzerland and Brazil. 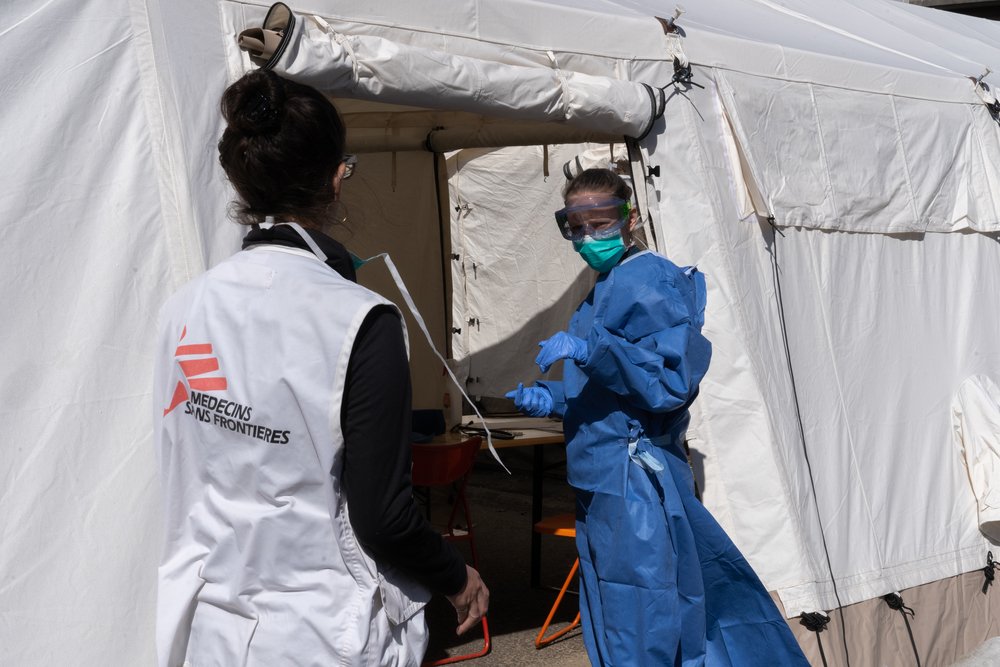 During 2020, we continuously adapted our response as we gathered more knowledge about the virus. Our teams conducted consultations via telephone or online.

We used innovative techniques such as 3D simulations to teach nursing home staff in Spain how to manage a flow of people to reduce infections.

We repurposed existing facilities; for example, transforming our burns treatment centre in Port-au-Prince, Haiti, and our surgical units in Mosul, Iraq and in Bar Elias, Lebanon into COVID-19 hospitals.

We spoke out about inequalities, with MSF’s Access Campaign urging pharmaceutical companies not to profit from the pandemic and calling on governments to challenge patent monopolies on tools to allow faster, cheaper access to them in the countries where we work. 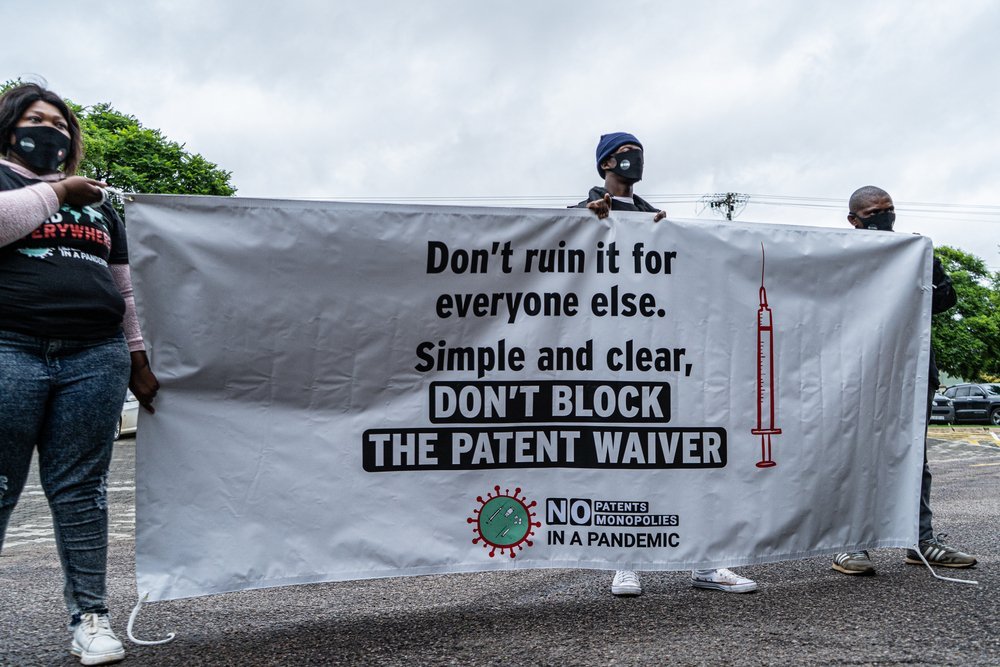 Members of various civil societies gathered outside the embassies of the United States, United Kingdom, Australia, Canada, Brazil which opposed a temporary patent waiver on COVID-19 vaccines which was proposed to the WTO by South Africa and India.

Punishing people on the move

COVID-19 had a far-reaching impact on other areas where we work.

Governments used the pandemic as an excuse to punish or deprive migrants of their rights and services, imposing restrictions on the movement of refugees in camps in Bentiu, South Sudan, and Cox’s Bazar, Bangladesh.

In May, we called on the US and Mexican authorities to halt mass deportations of people from pandemic hotspots to countries in Central America and the Caribbean with more fragile health systems. 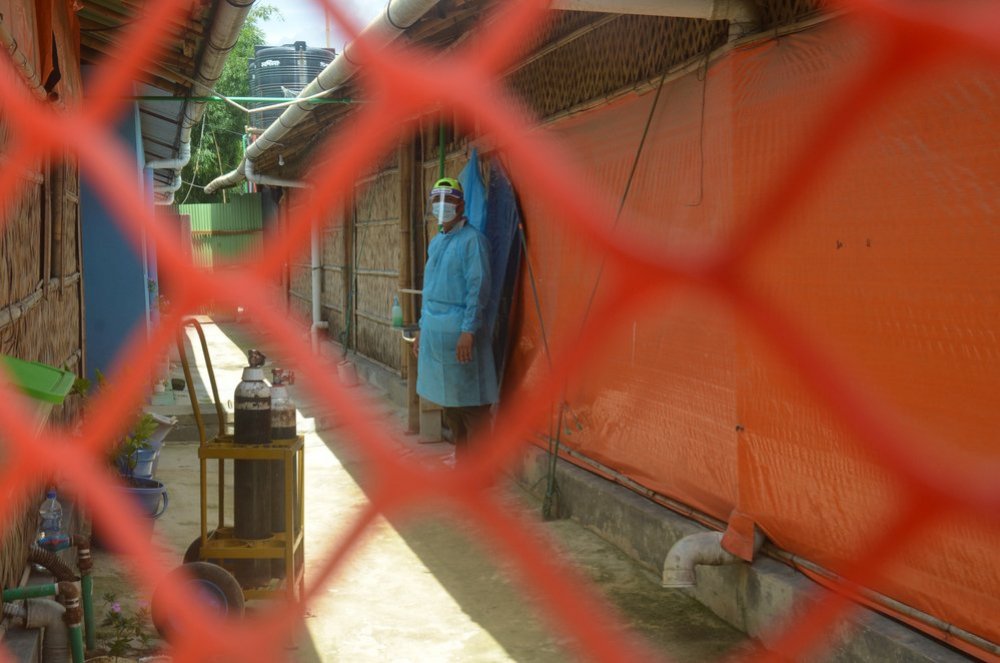 When possible, we continued our search and rescue activities in the Mediterranean Sea – first on Ocean Viking, and then on Sea-Watch 4 – to assist people fleeing the dire conditions in Libya.

But NGO search and rescue efforts were repeatedly targeted by Italian authorities: at one stage virtually all NGO vessels were detained over minor technical issues, leaving little or no NGO rescue capacity in the Mediterranean.

The Sea-Watch 4 was detained for six months from September. 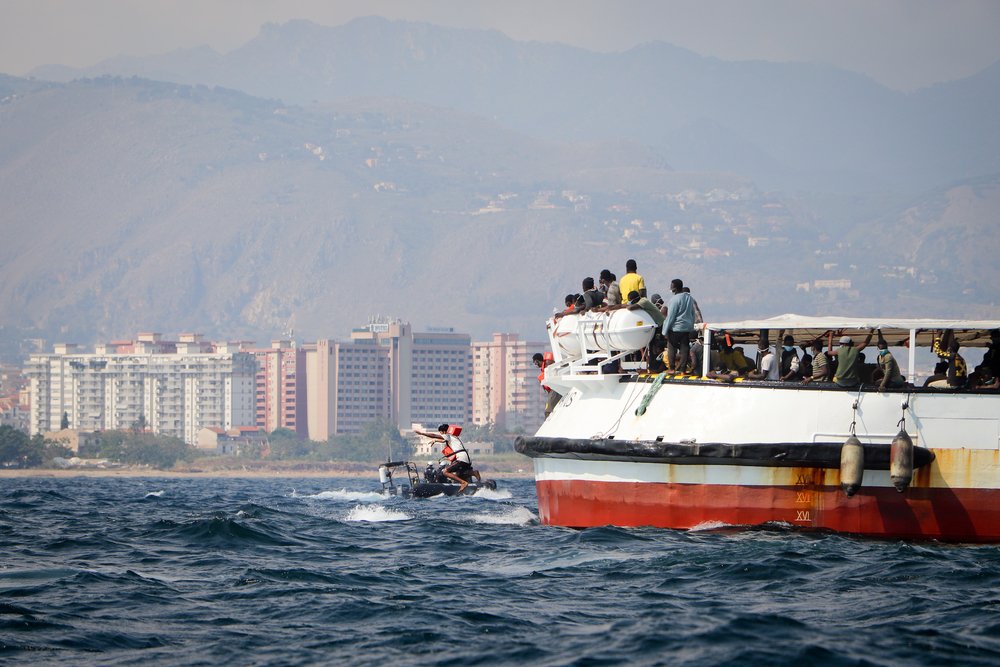 MSF/Hannah Wallace Bowman
On the morning of September 17th 2020, as Open Arms awaited instructions from authorities regarding the disembarkation of the 275 survivors rescued in the Mediterranean sea, more than 70 people jumped into the water in desperation. Sea Watch, 2020.

European authorities maintained their hard stance on migrants and refugees, resulting in the routine destruction of camps in Paris, and continued pushbacks and abuse by authorities in the Balkans.

Harsh containment measures and deplorable living conditions in Moria, Greece, led to the camp being burnt to the ground in September.

In each of these locations, we provided medical assistance and psychological support. 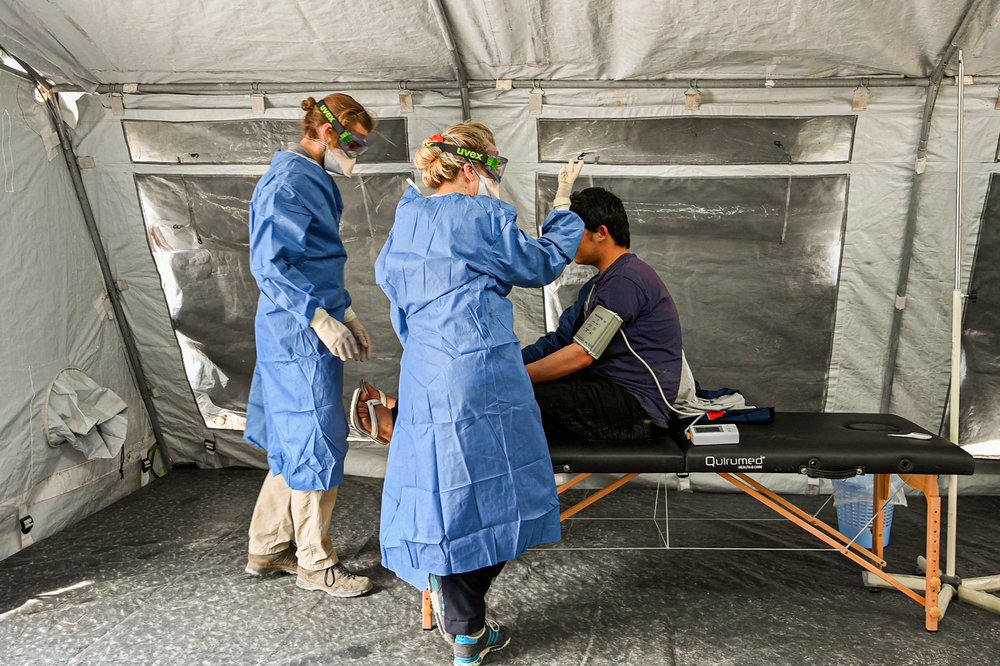 Peter Casaer/MSF
In the pediatric clinic outside Moria camp, our patients (children and pregnant women) pass through a first screening. If they present coughing, diarrhea, vomiting or fever they are directed towards an extra triage than the others. Greece, 2020.

In 2020, we were forced to temporarily suspend or scale back some of our activities after violence against our facilities and staff, including in Taiz, Yemen; Borno state, Nigeria; Fizi territory, Democratic Republic of Congo (DRC); and northwestern Cameroon. 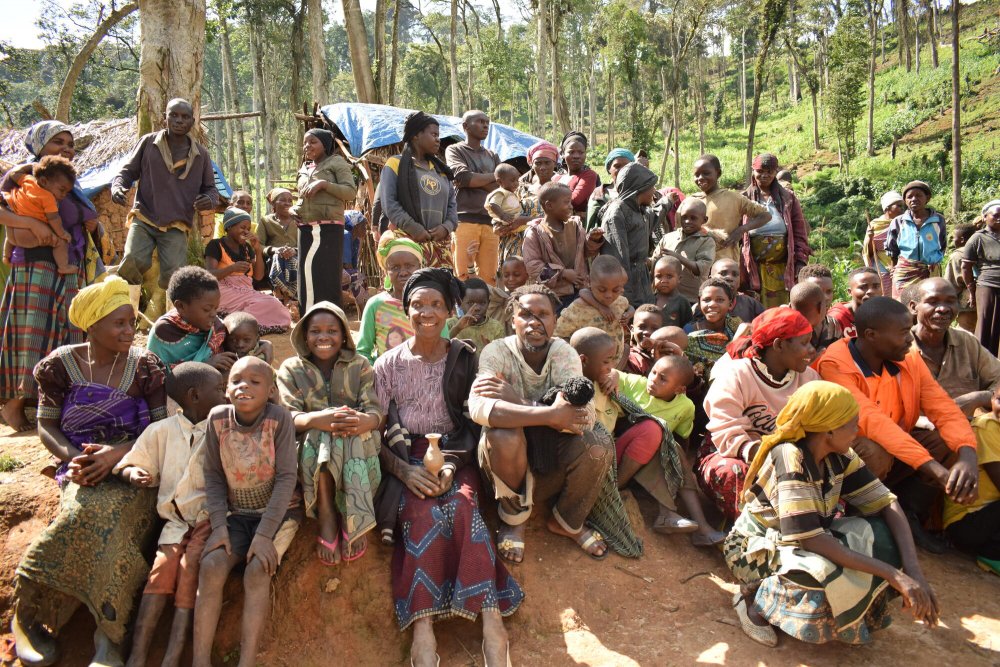 A group of internally displaced people gather in a makeshift camp in Katasomwa, in the Kalehe Territory of South Kivu. Democratic Republic of Congo, November 2020.

On 12 May, following an attack on the maternity wing in Kabul’s Dasht-e-Barchi hospital, Afghanistan, in which 16 mothers and an MSF midwife were killed, we had no option but to close the facility, thereby depriving women and babies of critically needed obstetric and neonatal care. 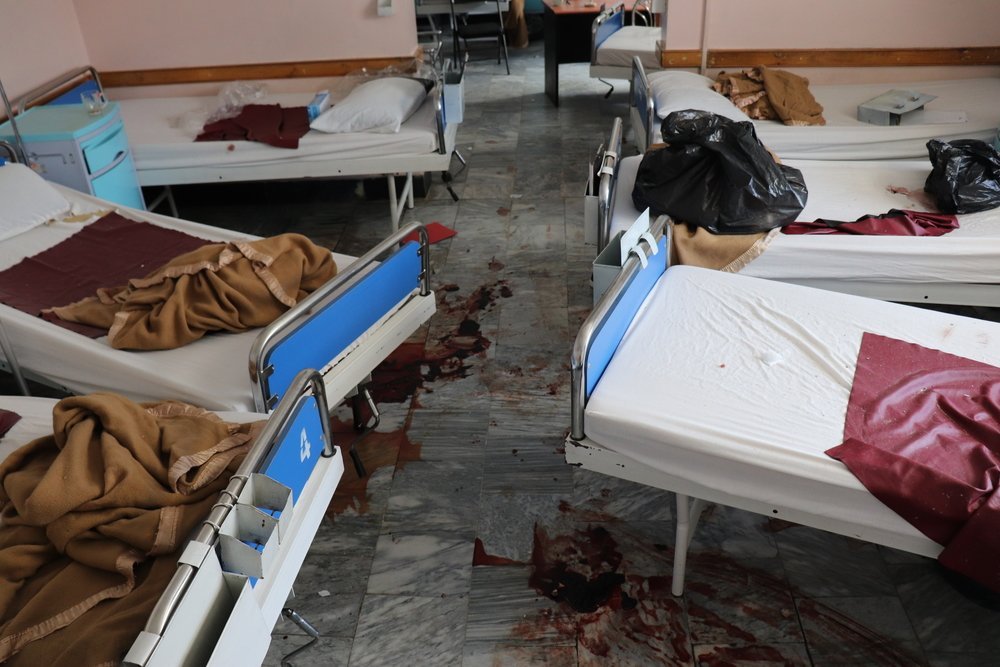 One of the wards in the maternity department in Kabuk, Afghanistan. 2020.

Our teams continued to assist displaced people living in camps across North and South Kivu and Ituri provinces in northeastern DRC, where violence has surged; and in Mozambique’s Cabo Delgado province, where an ongoing, largely invisible conflict has driven thousands from their homes.

In June, following an upsurge in intercommunal clashes in Greater Pibor, South Sudan, we sent mobile teams to provide emergency care to the traumatised communities who had fled into the bush. 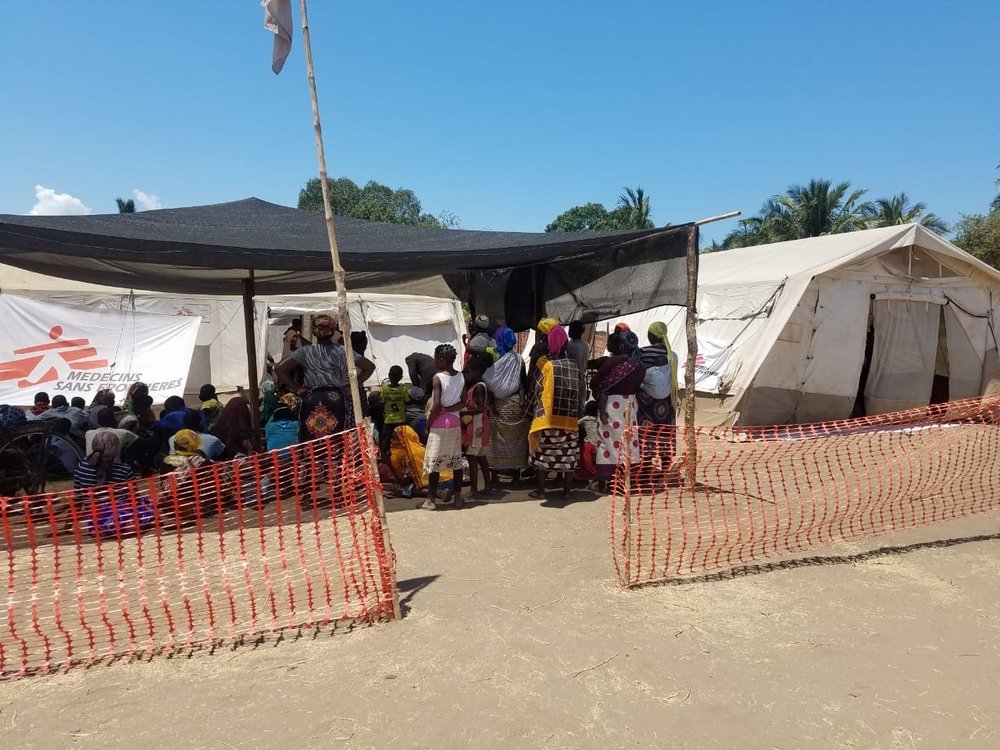 MSF
A growing number of IDPs continue to arrive in Pemba as a consequence of the ongoing conflict in Cabo Delgado. To respond to their increasing needs, MSF's second mobile clinic became operational on 28 October 2020 in Nangua. Mozambique, 2020.

In 2020, instability and violence continued across the Sahel – including in Burkina Faso, Mali and Niger – leading to the mass displacement of people and increasing humanitarian needs, which MSF teams did their best to respond to.

In October, conflict broke out between Armenia and Azerbaijan in Nagorno-Karabakh.

During the fighting, MSF teams assessed needs and offered emergency assistance, before setting up regular programmes in December. 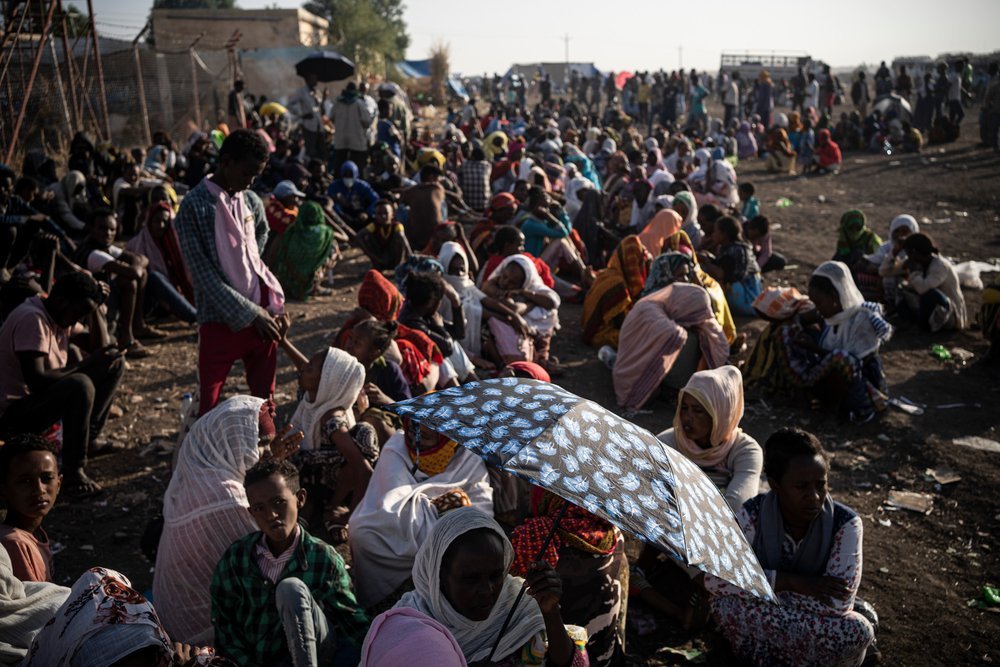 By the end of the year, violent clashes had displaced hundreds of thousands of people both across Tigray and into neighbouring Sudan, where they sought refuge in makeshift camps.

Our teams delivered food, water, sanitation services and healthcare to displaced people and host communities on both sides of the border.

Responding to natural disasters and diseases

In recent years, we’ve responded to emergencies brought on by a changing climate.

In Niamey, Niger, where more rains have brought floods, our teams have observed and responded to increases in malaria and malnutrition cases, the latter due to wiped-out crops.

Across the Sahel, climate change has contributed to an imbalance of land available to livestock herders and farmers. 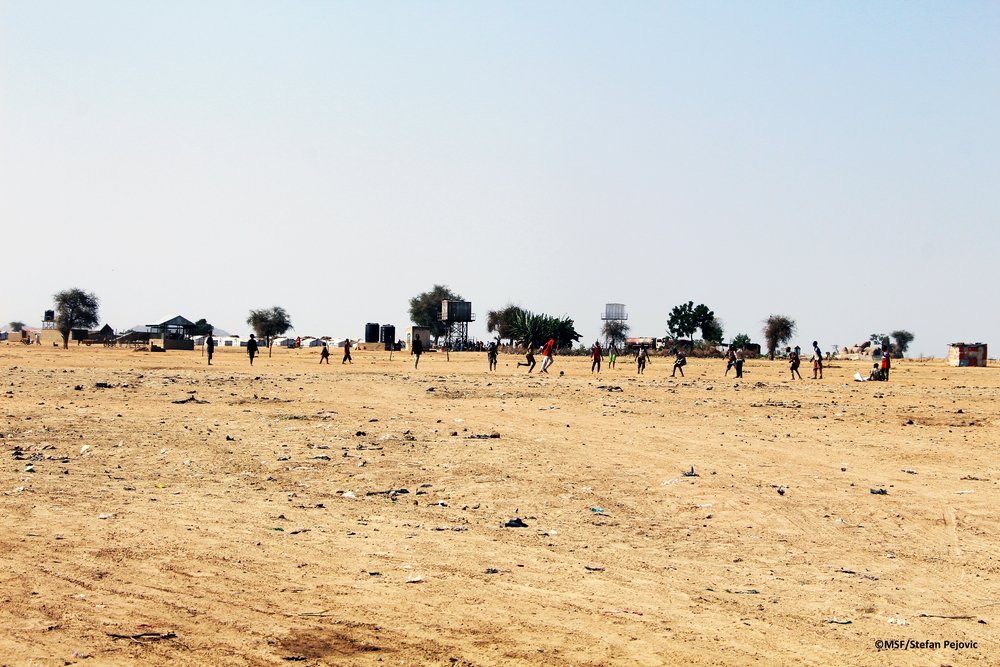 MSF/Stefan Pejovic
The dry, hot season in the part of western Africa known as the Sahel usually lasts from November until May. Not a single drop of rain touches the cracked earth for nearly seven months.

The competition over resources and the authorities’ inability to negotiate access to land have resulted in conflict between the two groups, adding to the violence and insecurity across the region.

"In 2021, we remain committed to doing our utmost to identify and help those in need, regardless of their race, religion or political conviction."

Whether or not they were the consequences of climate change, MSF teams continued to respond to natural disasters and outbreaks of disease. In 2020, we assisted people affected by storms in El Salvador, floods in Somalia, Sudan and South Sudan, and a hurricane in Honduras. 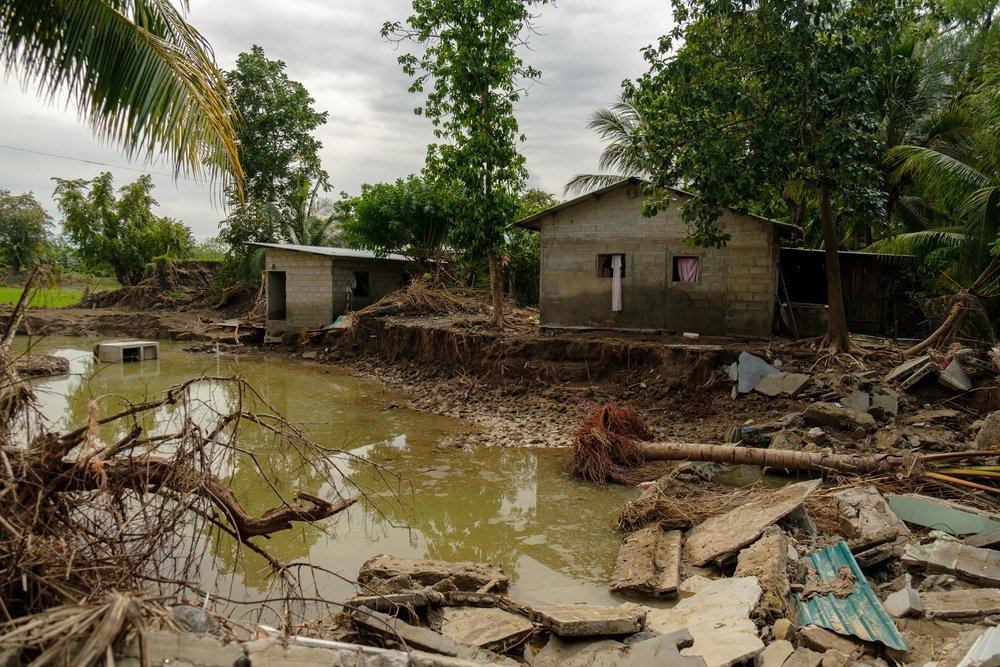 Our teams also ran malaria treatment and prevention campaigns in countries such as Venezuela, Nigeria, Burundi and Guinea, and treated patients with cholera and acute watery diarrhoea in Kenya, Ethiopia, Mozambique and Yemen.

More than two and a half years of consecutive Ebola outbreaks in DRC ended in November 2020, by which time over 2,300 people had died. MSF teams treated patients and assisted the authorities to control all three outbreaks. 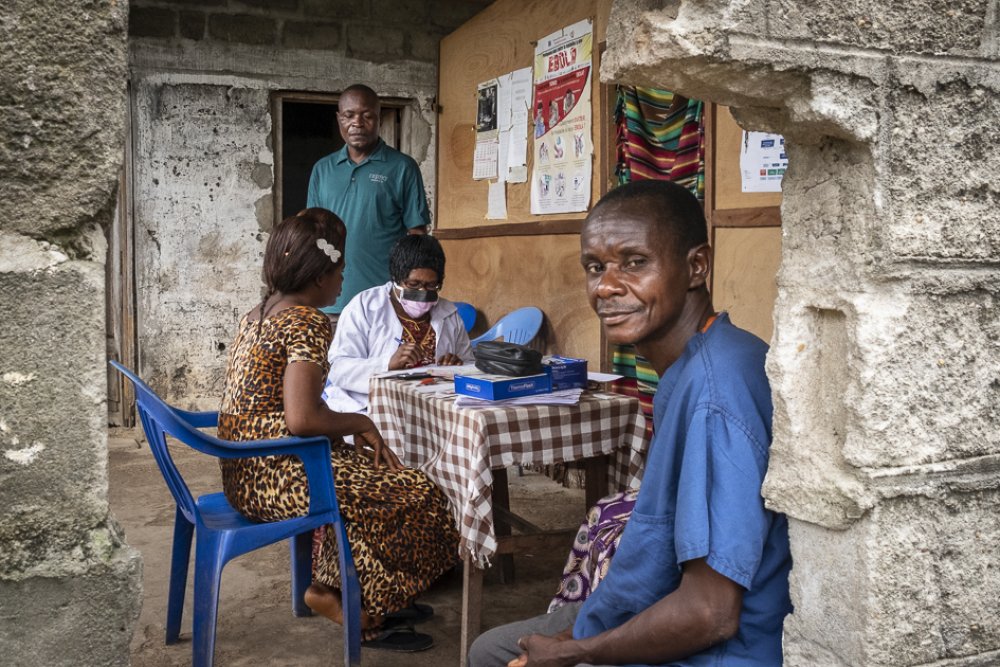 The large-scale measles epidemics of 2019 persisted into 2020, with DRC, CAR and Chad particularly hard hit.

Outbreaks in Mali and South Sudan have also killed thousands of children.

Some die at home, many without ever receiving proper medical care.

Where possible, MSF teams provided treatment and undertook mass vaccination campaigns; the latter were frequently interrupted or cancelled though, due to COVID-19, as were routine vaccinations. 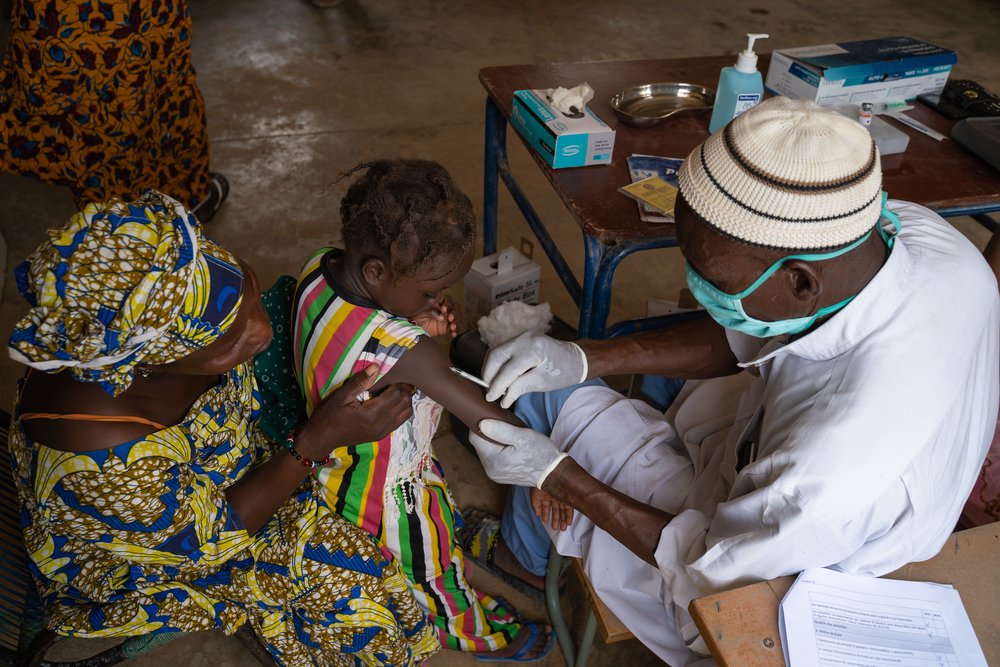 MSF/Mohamed Dayfour
A mother with her daughter who is being vaccinated against measles in a village in Timbuktu region, northern Mali. Measles Vaccination Campaign in Timbuktu, 2020.

In 2021, we remain committed to doing our utmost to identify and help those in need, regardless of their race, religion or political conviction.