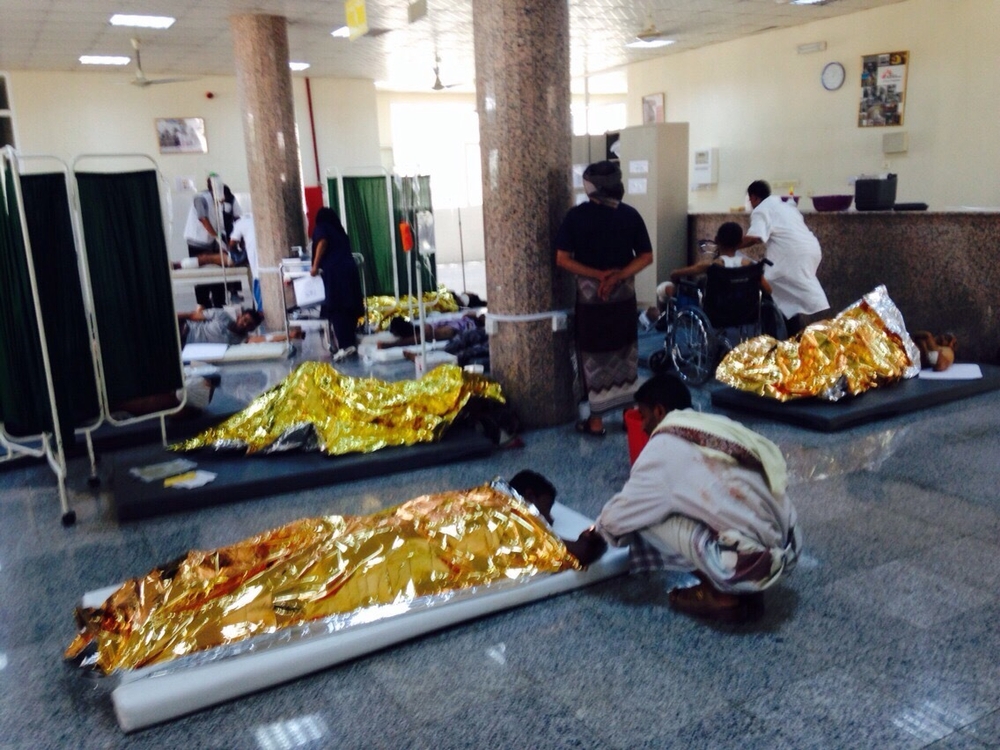 Dr Ali Dahi is working for Médecins Sans Frontières/Doctors Without Borders (MSF) in Ad Dhale, an area in the south of Yemen that continues to see pitched battles in towns and aerial bombardment as Houthi forces push southwards.

Due to the violence, many people needing lifesaving medical assistance cannot reach it in time.

"We had two or three days of relative calm last week, but once more there is heavy shooting and bombing in Ad Dhale town. Every day we are getting calls from patients in a critical condition – sometimes war-wounded, sometimes with other serious health problems – who cannot reach our hospitals.

On three occasions over the last two weeks, women with life-threatening labour complications have called us from checkpoints that were closed because the roads to our hospital were too dangerous.

Two of those women, and one unborn child, died waiting for them to open again.

Just yesterday, during a home delivery a woman developed severe post-partum bleeding. But at that moment, fighting had intensified in Ad Dhale town, and she was turned back from a checkpoint on the way to our hospital. She was unable to reach any other health facility in time. She too died.

In another case, a woman needed an emergency caesarian section to save both her life and that of her unborn child. But the road was too dangerous for our ambulance to bring her to our health facility or for her to travel to any other facility capable of doing the operation.

The only option available to save her life was for a doctor in the village to induce the delivery, resulting in the death of the fetus. The mother survived.

These are just the stories we know about.

MSF
"Every day we are getting calls from patients in a critical condition – sometimes war-wounded, sometimes with other serious health problems – who cannot reach our hospitals."

We refer serious cases needing more specialised care to other facilities whenever we can, sometimes across front lines.

In the last two days we were able to refer six patients from Ad Dhale town to the MSF hospital in Aden, where we have greater surgical capabilities and where a new surgical team and supplies managed to arrive yesterday.

But too often heavy fighting on the road means we have to keep patients needing referral in our in-patient department in Ad Dhale, waiting for a moment when it is safe to transport them.

Sometimes this works; too often it takes too long.

Severe shortages in and around Ad Dhale town

About 60 percent of the population has fled Ad Dhale town to the surrounding area, which is a little safer, relatively speaking.

The town is effectively closed. There is a shortage of fuel and electricity, which also means a shortage of water as it cannot be pumped. This is a problem for the hospital, but the hospital director just managed to organise a water truck delivery to keep us going for the moment.

The surrounding Ministry of Health hospitals are running out of supplies. MSF is donating materials where we can, but we need to get more supplies in.

The Ministry of Health is out of drugs for chronic diseases, so patients on long-term treatment for conditions like tuberculosis risk having that treatment interrupted. Especially for tuberculosis, this encourages drug resistance, complicating people’s treatment in the long-run.

Vaccinations are being missed as the lack of electricity means doses cannot be kept refrigerated, again creating long-term risk from preventable disease. There is also a shortage of food in the area.

We have treated over 150 war-wounded in Ad Dhale since the violence here escalated. But the violence is leading to deterioration in the health of people caught up in this conflict in other ways.

The process for getting medical staff and material into Yemen needs to be made easier and faster."

Find out more about our work in conflict areas