Yemen: Health structures are threatened by fighting in Hodeidah

MSF teams have treated more than 500 war-wounded people since the start of a new offensive launched by Saudi and Emirati (SELC)-backed forces against Ansar Allah troops on 1 November. MSF is extremely worried for its patients and staff threatened by fighting very close to its facilities in Hodeidah, Yemen.

Heavy fighting and shelling have resumed inside Hodeidah, with battles getting very close to Al-Salakhana hospital, where MSF teams are working.

“Our staff can hear explosions and shootings extremely close by occurring every day around Al-Salakhana hospital” explains Caroline Seguin, MSF operations manager for Yemen. “Ground fighting between military forces are getting closer to this hospital, raising concerns about patient and staff safety.”

“MSF health facilities have been hit six times in Yemen since 2015, killing 27 people and injuring 40,” says Seguin. “All parties to the conflict must ensure that civilians and civilian facilities such as hospitals are protected.”

Al-Salakhana hospital remains one of the only three open and operational public hospitals in the area. Al-Thawrah hospital, the main public health facility in the city, is still operational but threatened by fighting and rapidly moving frontlines.

“Civilians have ever fewer options to access healthcare in Hodeidah, and referral to other health facilities outside the city takes hours”, explains Seguin. “We see children hit by gunshots and pregnant women with complications in urgent need of lifesaving medical care arriving very late at hospitals in Mocha and Aden, which are hours away by road.” 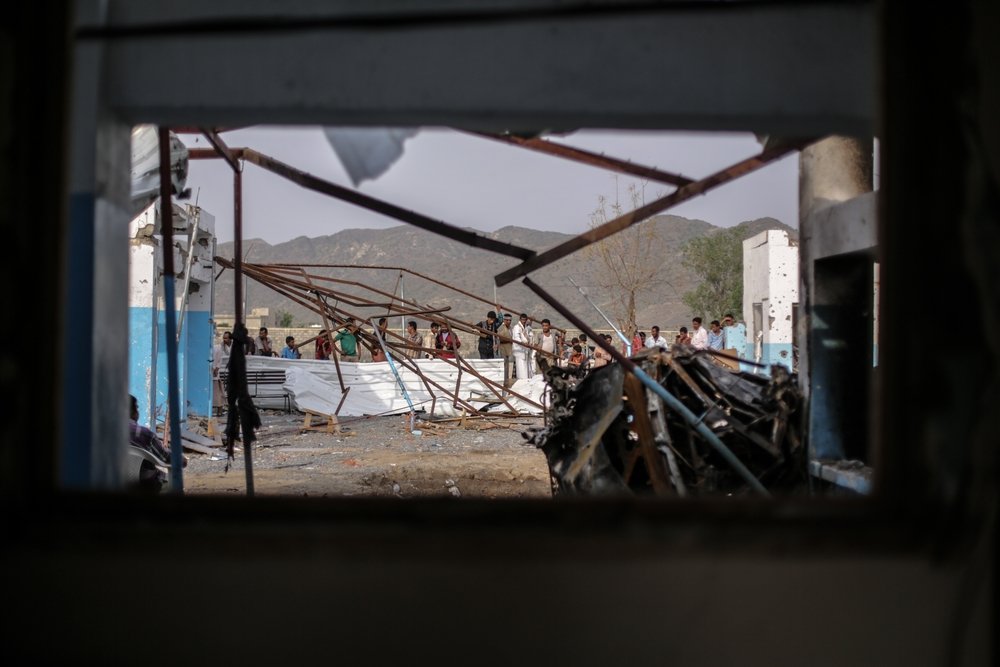 Between 1 and 15 November, MSF teams treated 510 war-related wounded, including at least 31 women and 33 children at our facilities in Hodeidah, Abs, Aden, Hajjah and Mocha. Among them, 241 were injured by gunshot, 227 by blast and 30 by shrapnel. Admissions to emergency rooms increased by 56 percent in Aden and 50 percent in Mocha during the first two weeks of November, compared to the same period in October. To respond to the influx of war-wounded, MSF teams increased its bed capacity from a total of 133 to 172 at its Aden, Hodeidah and Mocha hospitals.

As fighting continues inside Hodeidah, a potential siege of the city could lead to civilians being caught in the crossfire and trapped inside without enough hospitals to support them. “Today, we don’t know how people would escape if they were to be trapped inside Hodeidah between warring parties, and how they would access basic services if the situation worsens,” says Seguin.

While the US has called for a ceasefire within 30 days – at the end of November – and peace talks have been postponed to the end of the year, MSF warns about the huge toll this offensive is taking on civilian lives. No realistic figure is available about the overall death toll: the official death toll for the conflict has remained at 10,000 since August 2016, while other monitoring groups such as the Armed Conflict Location & Event Data Project has announced more than 57,000 people have died.