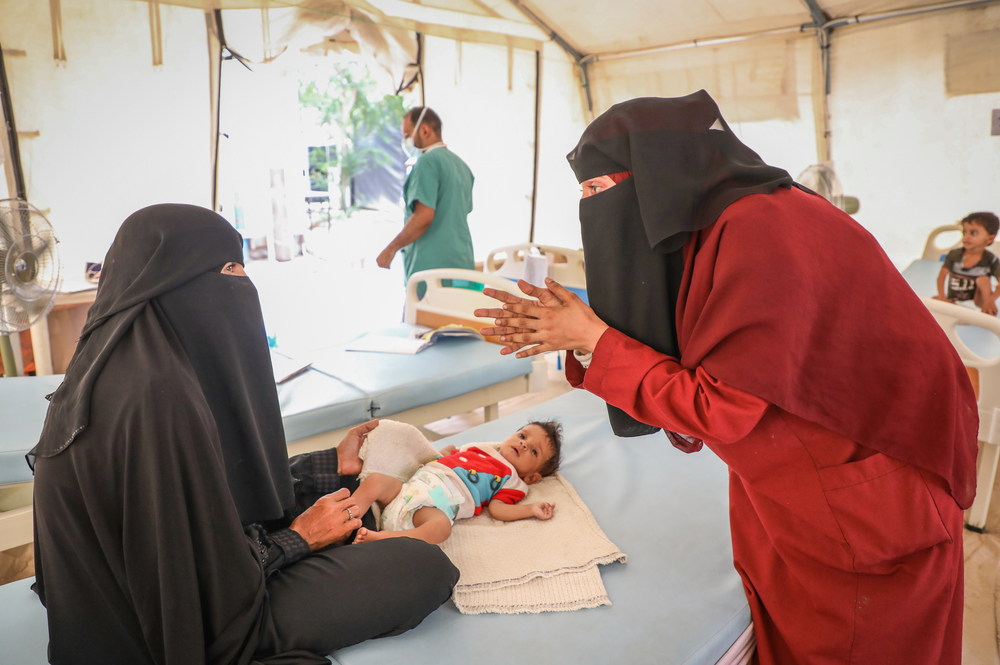 Yemen: The influx of patients with acute watery diarrhoea reveals another side of children's suffering in Hodeidah

Zakaria, a four-year-old boy, finally reached the only free-of-charge hospital in Ad Dahi, north of Hodeidah governorate after days of suffering from diarrhoea and severe acute malnutrition.

"We brought him to the hospital by motorbike, after we transferred him to a clinic in the area, and then we took him home, but his health did not improve, so we brought him here," says Zakaria's mother.

Working as a motorbike driver, Zakaria's father doesn't make much money. He earns about 2,000 Yemeni riyals (less than USD 4) per day and almost half of it goes to fuel costs amidst a prolonged fuel crisis with increases in food prices. 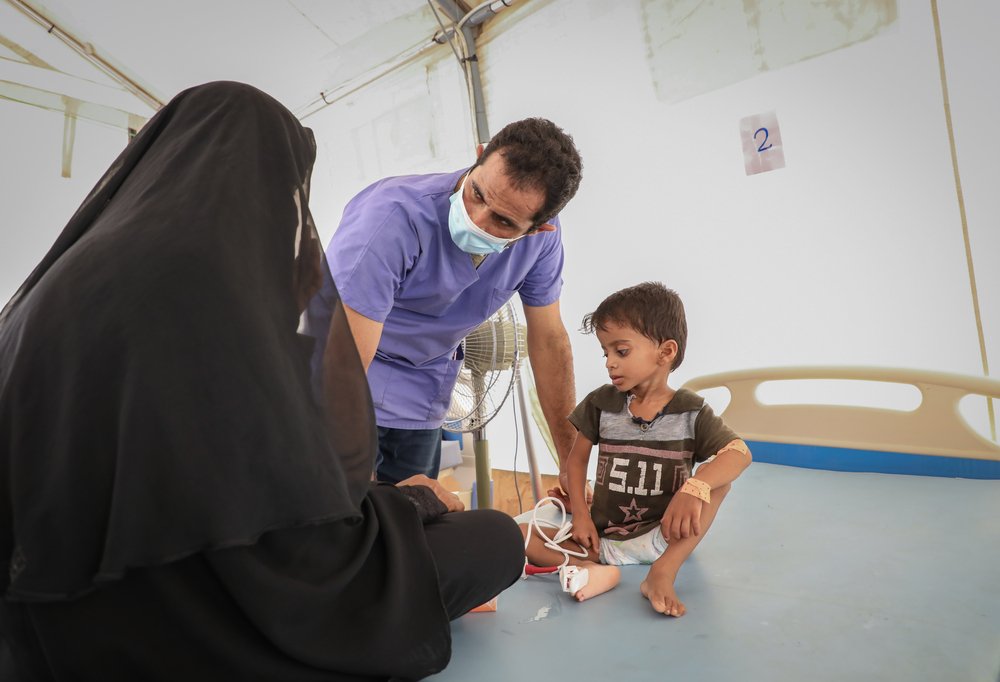 In Ad Dahi District people survive impoverished living conditions, with many living in very basic homes or tents, struggling to afford food, water, or healthcare. Families frequently don’t even have the means to pay for transport to the hospital, and many turn to traditional medicine or whatever they can find locally. Often people only come to the hospital when the patient is extremely unwell and there are no other alternatives.

In Ad Dahi rural hospital, Médecins Sans Frontières/Doctors Without Borders (MSF) has been working in collaboration with the Ministry of Health since 2019, supporting emergency healthcare, inpatient paediatric and neonatal care, as well as responding to disease epidemics like measles, malaria and dengue fever. MSF also built a new emergency department to improve the provision of essential quality emergency healthcare to the patients in the area. Recently, MSF started to implement a pediatric emergency referral system in districts surrounding Ad Dahi in order to reduce pediatric morbidity and mortality through timely access to free, quality emergency healthcare, with support to Al Kadan primary health centre.

Since August 2022, MSF teams in Ad Dahi have been treating an influx of patients with acute watery diarrhoea and the vast majority of them are children under five years of age with severe acute malnutrition. To respond to the needs as Ad Dahi hospital reached its full bed capacity, a 30-bed Diarrhoea Treatment Centre was established at a local community charity centre and more staff were deployed to provide support. 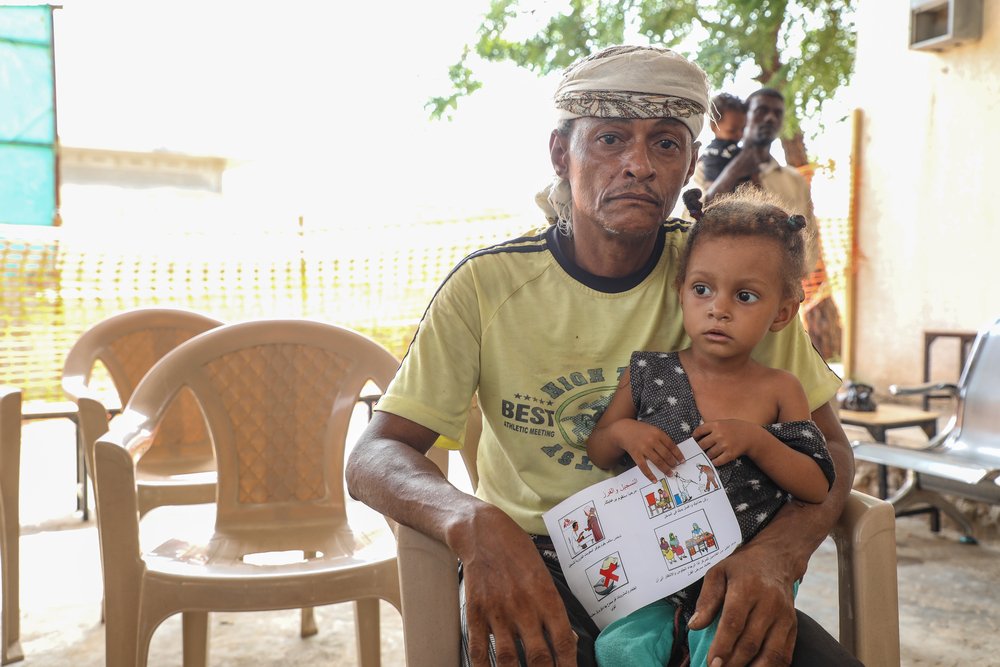 MSF/Majd Aljunaid
Abd Al-Rab Ahmed, displaced from the city of Hodeidah and lives in the Ad Dahi district

"I have two daughters, this is Malak, she is one year and eight months old and she suffers from sudden diarrhoea since yesterday, she stopped eating and has vomited. We bring her here to this centre after we knew that doctors are treating children for free," says Abd al-Rab Ahmed who is displaced from the city of Hodeidah and lives in the Ad Dahi district.

"There is a seasonal outbreak of acute watery diarrhoea in the area following the rainy season, but looking back on our data in the last three years, we noticed that the trend is really increasing and even this year the trends are doubling compared with 2021, with patients coming from different areas. We are receiving patients from Az Zaydiyah, Al Mighlaf, and Al Luhayyah and now we are starting also to receive patients from the Milan Al Mahwit governorate," says Dhuha Shamsuddin, MSF medical activity manager in Ad Dahi.

Between August and October 2022 alone, 2,688 patients were admitted to the Diarrhoea Treatment Centre run by MSF in Ad Dahi, Hodeidah. Almost 52 per cent were severely acutely malnourished. 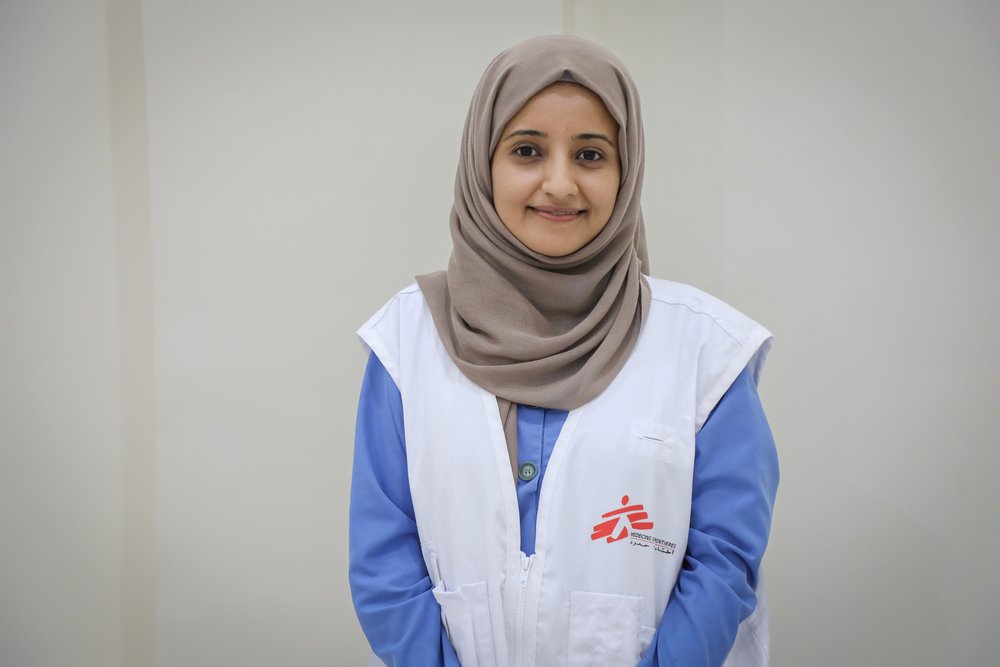 The majority of the children admitted recently to the diarrhoea treatment centre in Ad Dahi were malnourished. In response to the malnutrition crises in Hodeidah, MSF treats children with severe acute malnutrition with complications in Ad Dahi hospital, stabilises them, and refers them to a specialised treatment feeding center run by MSF to continue the treatment. The centre began receiving patients in November 2022.

"Severe acute malnutrition is a very difficult and complicated issue here. Mothers are gaunt and their babies look emaciated. Mother’s milk is unavailable from their own malnutrition, so they feed their babies sugar water or goat milk. Often these babies will be eight to12 months old, but look like a premature neonate, weighing less than a few kilograms. Their skin is pulled taught over their tiny faces, and you can see every rib with every breath. Their little distended bellies are covered with tiny scabs in patterns - healing cautery from the traditional healer," said Matt Cloutier MSF emergency doctor in Ad Dahi rural hospital in Hodeidah.

"Severe acute malnutrition is a very difficult and complicated issue here. Mothers are gaunt and their babies look emaciated. Mother’s milk is unavailable from their own malnutrition, so they feed their babies sugar water or goat milk. Often these babies will be eight to12 months old, but look like a premature neonate, weighing less than a few kilograms. Their skin is pulled taught over their tiny faces, and you can see every rib with every breath. Their little distended bellies are covered with tiny scabs in patterns - healing cautery from the traditional healer," 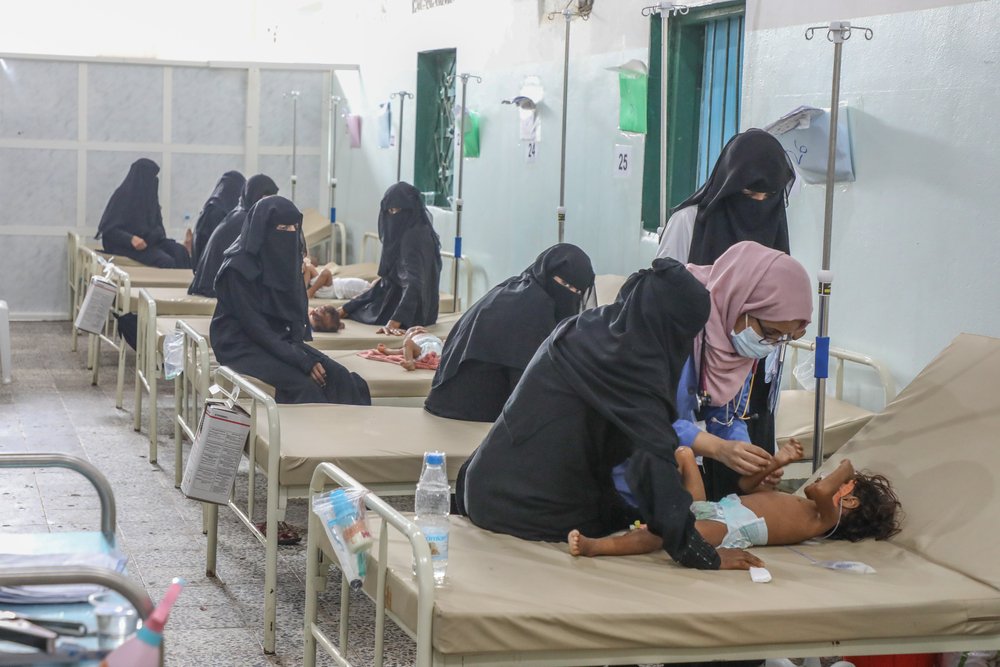 The war has not only impacted people, but also infrastructure. The economic inflation, fuel crisis, and poor living conditions make it difficult to afford food or access healthcare for more vulnerable families. Some families are relying on improvised, or home-made medicinal treatment before going to the hospital, and in many cases, this is further affecting their health condition. Many present to the emergency room at a very late stage, with severe medical and nutritional complications which sometimes exceed the capacity of the MSF-supported hospital in Ad Dahi.

The health system in Yemen has collapsed; in addition, the vast majority of people don’t have regular incomes and struggle to meet their basic needs. Financial barriers often prevent people from accessing healthcare in a timely way. In such a context, it’s paramount to ensure that healthcare is provided for free, at least for essential and supported services.

"Every day, MSF teams in Ad Dahi treat conditions that could be prevented with effective and timely access to primary healthcare. In order to avoid a deterioration of people’s health status, medicines, medical supplies, incentives (in the absence of salaries) should be available in primary health centres and units at all times, " says Mohamed Ahmed, MSF project coordinator in Hodeidah. 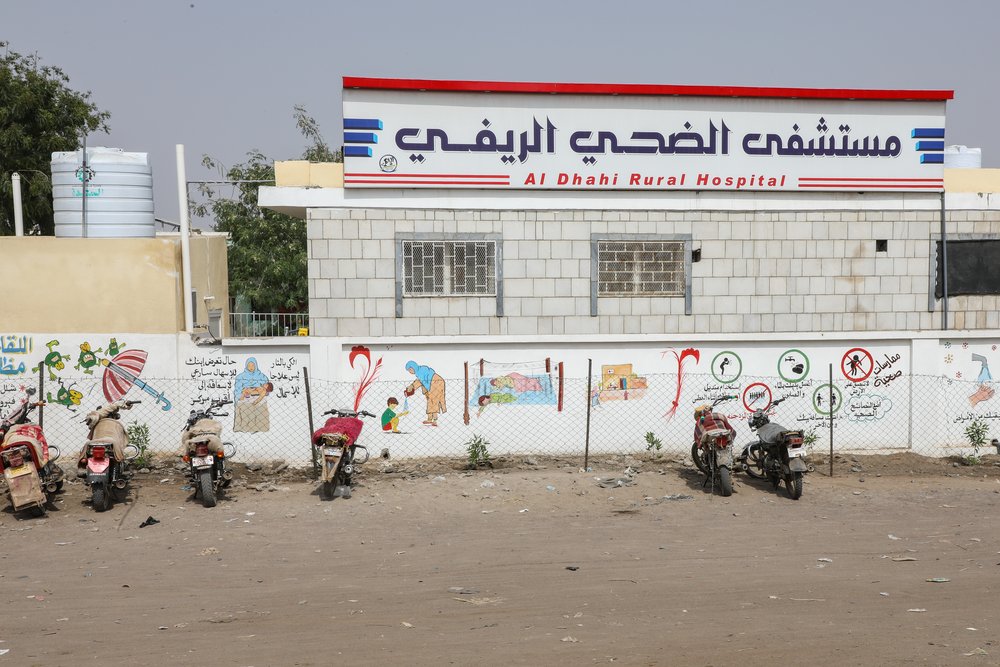 MSF/Majd Aljunaid
External view of MSF-supported Ad Dahi rural hospital in Hodiedah with some health promotion messages were painting by the HP team to educate the population in the area on different health issues, including protection and prevention measures of various diseases and reinforce good health and hygiene practices.

"Almost all the problems can be linked to the conflict. The most common causes of illness and death in the children we see are related to lack of good quality food causing malnutrition, poorly maintained infrastructure causing water/food-borne illnesses, and lack to access primary healthcare resulting in many vaccine-preventable diseases, absent prenatal care and complications from births at home," added Mohamed.

Sadeq is a nine-month-old baby who has been lying beside his mother for four days in the diarrhoea treatment centre in Ad Dahi.

"We brought him to Al Kadan health centre, then doctors referred us here as he is suffering from acute diarrhoea. I also have two other children and their father is collecting wood to get sustenance. If they didn’t refer us here, we may have gone home and waited for God's destiny. Even if my child is sick, we can’t afford to transfer him to the hospital, " says Sadeq's mother. 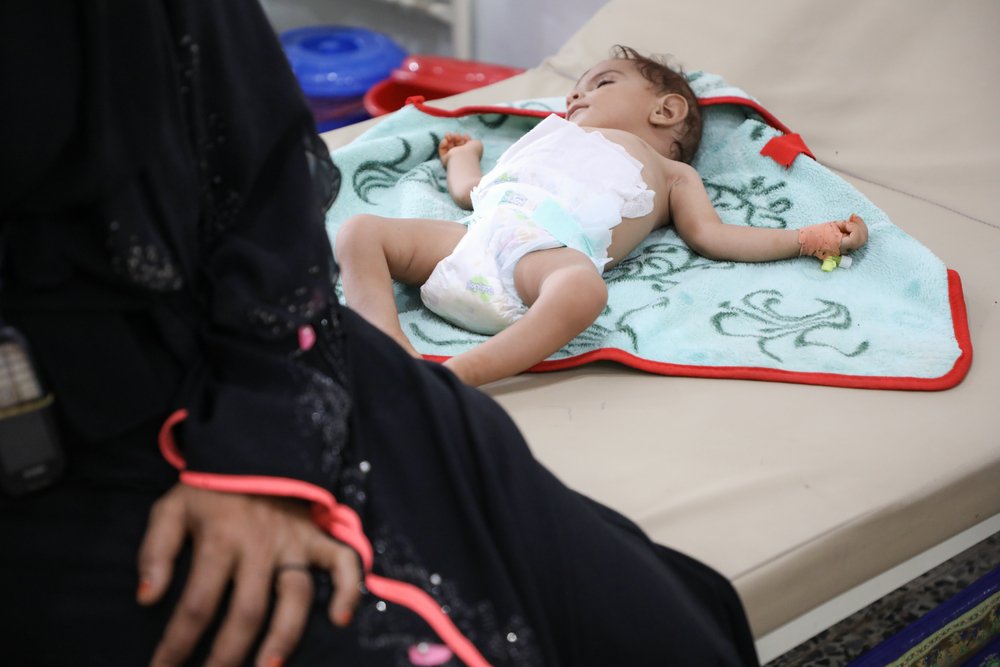 MSF/Majd Aljunaid
Sadeq Mohammed, 9 months old laying in the diarrhea treatment center in Ad Dahi for four days. “We brought him to Al Kadan health centre then doctors refer us here as he is suffering from acute diarrhea. I have also two other children and their father is working on a wood collection to get sustenance. If they didn’t refer us here, we may come back home and wait for God's destiny even if he is sick. we can’t afford to transfer him to the hospital”, says Sadeq's mother In 2022, MSF is focusing on implement a paediatric emergency referral system in districts surrounding Ad Dahi, in order to reduce the paediatric morbidity and mortality through timely access to free quality emergency health care as MSF started to support Al Kadan primary health centre.

Health promotion plays a vital role in educating the communities and encouraging them towards good health practices, to support the medical response. In Ad Dahi, the MSF community health workers hold sessions with families and caretakers in the hospital and in primary health care centres, and ask them to seek medical advice when needed. 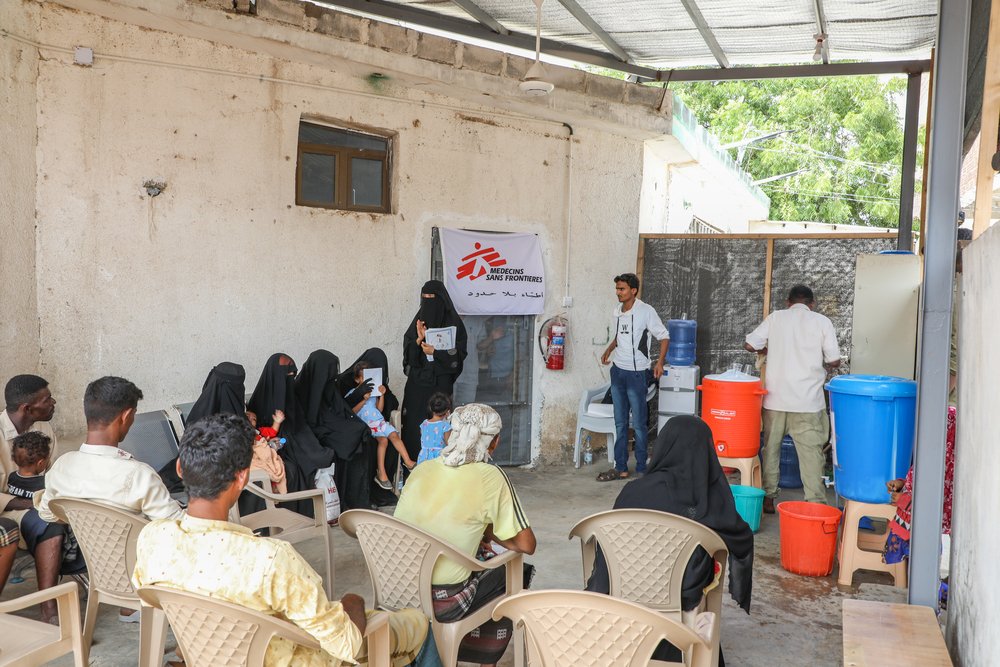 MSF/Majd Aljunaid
A female health promoter while holding a session with patients and caretakers on disease transmission and prevention methods in the waiting area of the diarrhea treatment center in Ad Dahi.

"For all our families they should take medical advice once they notice that the child is sick and he or she is unable to drink or eat well or refuses food and when also they notice that the weight is reducing so much compared to the previous month. And for the vaccination schedule, we really encourage all the families, and all the mothers to go for the vaccination on time. Because we noticed this year there is a big drop in the vaccination status of all the children that we are receiving in our hospital. And finally, follow the instructions they receive from our community health workers like the importance of water chlorination, follow the proper way to prepare the food and milk for the kids," says Dr Dhuha Shamsuddin.

Zakaria, Malak and Sadeq, and many other children were admitted to the paediatric department where they received care and were able to be discharged after recovery. Some children can recover quickly after a few days and some can stay more than a month depending on the severity of their illness.

DONATE NOW TO SAVE LIVES