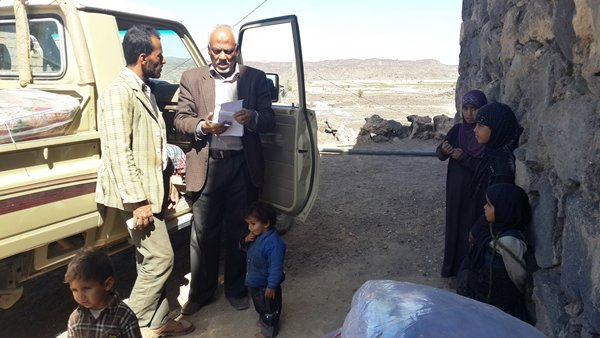 MSF’s newly formed Yemen Emergency Pool (YEP) has conducted a visit to Al Bayda governorate, to provide medical consultations as well as non-food items to IDPs fleeing the recent conflict which has been affecting the area for months.

The team conducted medical activities notably in Al-Quraishia and Wild Rabea districts to provide first aid for injured people and medical consultations for IDPs who had mainly fled their villages to the mountains, before seeking refuge in other villages in the district. The displaced populations have been supported by local communities, and MSF was able to provide some additional assistance.

MSF was, however, unable to reach some health units like Al-Khobza health unit that MSF initially supported and which is now not functioning due to the fighting. Medical staff there had to flee due to the violence, leaving no functional health unit in the area. Access to health for the population has become almost impossible in recent weeks, and people are afraid to move to health units or hospitals.

People Afraid to be Targeted

Dr Abdulla Ba-Sharaheel, YEP doctor, said: “Most of the IDPs were children and women. The children were mostly suffering from diarrhea and upper respiratory infections. I checked all the children, one by one, and gave basic medications.”

Marie-Elisabeth Ingres, MSF representative in Yemen, added, “We succeeded in treating only some of the injured people in the area; access to them is so difficult as they don’t go to health units and are very afraid to be targeted. Those who are seriously injured refuse to go to hospitals. We are very concerned about the IDPs and the population for Al-Quraishia and Wild Rabea in general as what we saw was a population with almost no access to health, from basic primary health care to the treatment of injured people. We call upon all parties to guarantee free and unimpeded access to health structures.”

MSF has been working in Yemen since 1986 and provides health activities in Sana’a, Amran, Aden and Al-Dhale’ governorates. The Yemen Emergency Pool, which started its activities in 2014, is intended to provide a quick response to emergencies in different parts of the country.

Find out More about MSF's Work in Yemen