A series of airstrikes on Monday morning by the Saudi and Emirati-led coalition struck near a busy street in the heart of Sana´a, Yemen. The airstrikes, which targeted the Yemeni presidential office, which is located near a hotel, pharmacies, a bank and shops, resulted in a mass casualty influx of at least 72 injured and 6 dead at two hospitals supported by Médecins Sans Frontières/Doctors Without Borders (MSF).
“Civilians, including children, were killed and maimed because they were in the wrong place at the wrong time,” said João Martins, MSF head of mission in Yemen. “No-one should live in fear of being bombed while going about their daily life; yet again we are seeing civilian victims of airstrikes fighting for their lives in hospitals.”
An MSF medical team visiting one of the hospitals at the time of the attack said the strikes occurred in quick succession. Casualties were immediately transported to nearby hospitals, including the MSF-supported Al-Gomhoury and Al-Thawra hospitals. Medical reports showed moderate to critical injuries caused by shrapnel. One child was among the dead and three children among the injured.
¨Some of the wounded arrived by ambulance, others arrived by motorcycle,” said Dr. Abdulfatah Al-Alimi, MSF Project Medical Referent in Sana´a, who arrived at Al-Gomhoury Hospital shortly before the first strike. “Some of the patients were suffering from head trauma. Others had shrapnel wounds in their

legs. There were all sorts of different injuries. I saw a young girl trying to enter the emergency room; she didn´t know if she would find her father dead or alive.”
Both hospitals had existing medical stocks provided by MSF. However, as medics struggled to treat the influx of injured, these supplies quickly ran out.
MSF sent additional supplies to both hospitals and deployed a psychologist to provide mental health support to patients and their families at Al-Gomhoury hospital. The injured were going about their daily routine at the time of the attack. Shehab, a 17 year-old high school student, was walking home from school, having just finished an exam. He suffered severe blood loss. Akram, a 19 year-old street cleaner, suffered injuries to his head and ears. A man, Dawood, was buying medicine at a local pharmacy when he was injured in the attack.
Hussein, a 30-year-old cafeteria worker, suffered shrapnel wounds in his head, hand and back. “I came to collect my transportation allowance from work. On my way, the airstrike hit and I got injured. I do not know what happened to the rest of my colleagues,” he said. On Tuesday morning, medics at both hospitals continued treating patients injured in the attack. “When a mass casualty like this occurs, it highlights how fragile healthcare is in Yemen today, and also how crucially important it is to the civilians caught in this conflict,” said Dr. Al-Alimi. 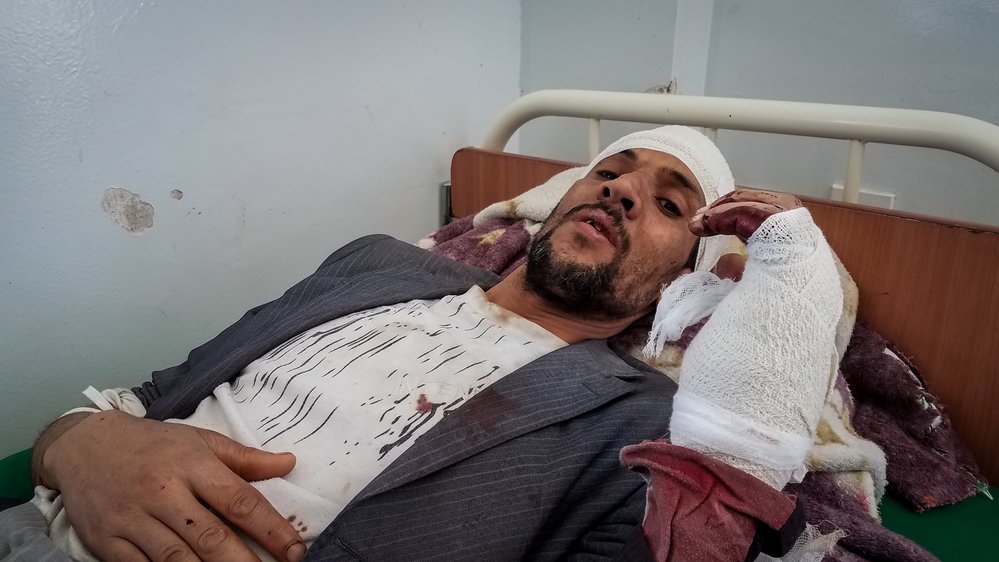 MSF
Hussein suffered shrapnel wounds to his head, hand and back.