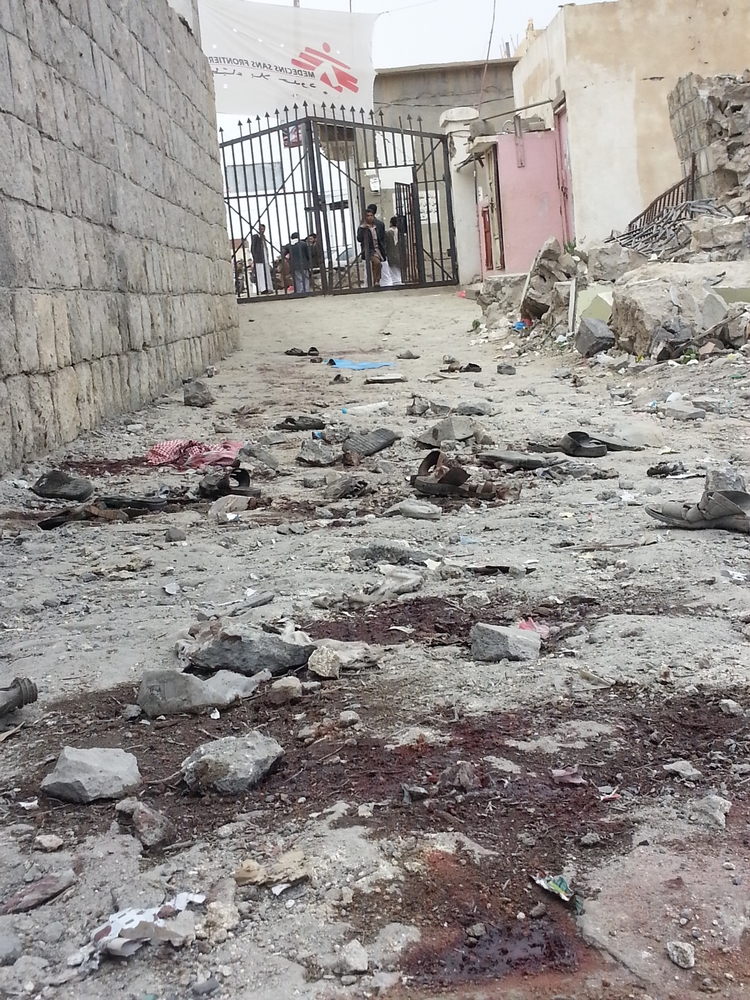 Yemen: "People are scared of going to hospital"

“At 9.20am on that Sunday, the medical team in Shiara hospital heard the noise of a rocket exploding. The border with Saudi Arabia is only half an hour away so everyone here is used to the sound of bombs and rockets.

Knowing it had hit somewhere nearby, they set about preparing for mass casualties. What they didn’t realise was that the missile had hit the hospital itself, and soon they would be treating their own colleagues and patients.

The rocket hit a corridor leading from the main gate to the hospital buildings, with a metal fence alongside. The wounded were hit by shrapnel from the missile, and also by shards of metal from the fence. The injuries were brutal.

Sheltering from the bombs

Many others received shrapnel injuries, but were able to leave on their own.

Healthcare is under attack in #Yemen, and it´s the people who are suffering most https://t.co/s5dg0tuDsC pic.twitter.com/YIDZErqqo2

Staff immediately began to do triage and to stabilise the injured. Two refused to be brought into the hospital – they were expecting a second hit, and they were fearful of being inside the building.

This meant we couldn’t stabilise them before the five-hour journey to the MSF hospital in Sa’ada city. One died; the other is in a very severe condition. But we managed to stabilise the rest.

The town of Shiara is up in the mountains. Most of its 40,000 residents are living in caves to shelter from the bombs.

People don’t want to leave the area because their crops, which they grow on terraces on the mountainsides, need intensive cultivation. If they left now, they wouldn’t have food for the coming year.

The hospital serves about 120,000 people in the area. Although it has six inpatient beds for emergencies, it only really functions in the daytime.

Scared to be in hospital

People won’t drive to the hospital at night – they are scared that their headlights will give them away in the dark and they’ll be bombed.

This is the third time we’ve had a hospital or clinic where we work attacked in Yemen, but altogether 130 health facilities have come under attack since the conflict began last March.

And Shiara hospital itself has been hit twice before.

MSF
Samir al Asib is treated by nurses in al Rowdah Hospital after he was hit by shrapnel on July 24, 2015 in Taiz, Yemen.

“People are more afraid than ever”

The reason we’ve been there for the past six weeks was to help rebuild the hospital after the previous bombing and set up lifesaving operations, including a maternity ward, a lab and an emergency room where patients could be stabilised before being transferred to Sa’ada city.

The building we were constructing was completely destroyed by the rocket.

People are more afraid than ever. Since the attack, there have been no deliveries in the maternity room – pregnant women are giving birth in caves rather than risk coming to the hospital.

Immediately after the attack, Shiara hospital closed, but six hours later, it reopened to attend to a new wave of emergency cases arriving at the hospital.

The MSF team is doing emergency stabilisation of the wounded, but without guarantees that it won’t be attacked again, we can’t just return to business as normal.”