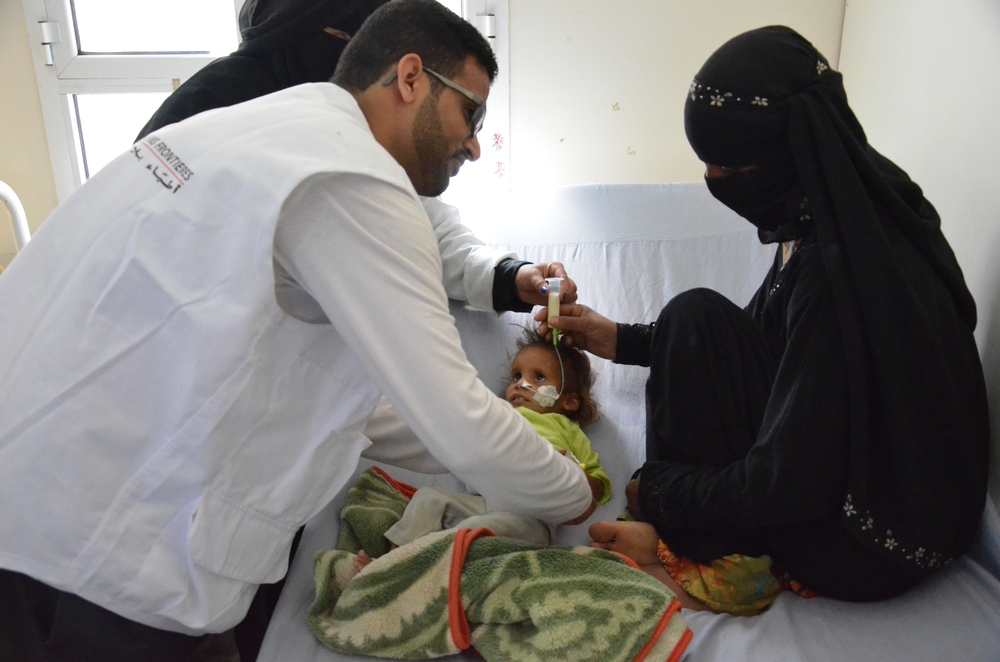 MSF has a total of 565 staff working in the country today, with 16 international staff and 539 Yemeni staff on the ground.

The following are four first-hand testimonies from MSF staff and patients working and living in Yemen, highlighting the plight faced by Yemenis today.

MSF
The emergency surgical unit of the MSF hospital in Aden, south Yemen.

I don’t really know how I can describe the situation in Aden in one word other than tragic.

There are areas that are completely empty. People have evacuated them as they did not have the basic necessities of electricity, water and food, let alone the extreme deterioration of the security situation which is jeopardizing their lives.

After evacuating their homes, some people not only lack water and food but also a place to sleep. Some knock on the doors of other people asking to stay in their house. Those hotels that are still functioning have received a lot of internally displaced people (IDPs). Some rooms are occupied by one or two families.

MSF is still present in Aden and we are still receiving injured on a daily basis. We have received hundreds of injured since the beginning of the clashes on March 19th. Yet we are facing many difficulties.

Movement is extremely difficult and sometimes dangerous. Recently we have not been able to reach the Crater Health Post which we are supporting.

The MSF hospital is now in the middle of the fighting. All the time we hear bombings and airstrikes. Windows at the hospital have been broken many times. The hospital and the ambulance have been hit by stray bullets as snipers are present in the surrounding area and fighting is still ongoing.

Aden has changed 180 degrees. The airport is damaged now. Many areas have been demolished. When you walk in the city you feel shocked and you do not believe you are in Aden. We are expecting death from anywhere and everywhere.

About a month ago I left Sa’ada with my family. The airstrikes hit places that were just some 20 or 30 meters from our house.

When we left Sa’ada we were only carrying our clothes and some important items. We came here with no furniture. Some good people donated mattresses and blankets for us.

Khamer is a peaceful town but we live in difficult conditions. We are five families living in the same house. Each family lives in one room. The water is very expensive as the water trucks do not move due to the fuel shortage.

I used to earn my living by working on a motorbike, but with no fuel I could not move my source of income from Sa’ada to Khamer. I want to go back home to my place in Sa’ada but I cannot with the airstrikes still ongoing and as I am responsible for keeping my family in a safe place.

We have been receiving mostly women from Khamer town or places nearby.

The most complicated pregnancies we used to receive are from faraway districts where women do not enjoy good health due to poor nutrition. We do not see many of them nowadays as they cannot afford the high prices of transportation.

These women and their families are the poorest in the area. Above all, they do not have other health facilities around.

Many women are now delivering at home with unskilled attendants, which puts them in danger if they have complications or if they need a C-Section.

Some of those who can make it to the hospital come very late and lose their babies.

Najeeba is a one year old child suffering from acute malnutrition.

Her mother said she could not afford the high price for transportation from Osman Valley where they live to Al-Salam Hospital in Khamer.

Najeeba’s father was not home, and the baby was extremely sick, so she went to the hospital in Khamer by foot, carrying her baby for six hours.

Dr. Emmanuel Berbain, MSF Medical Activities Manager says, “Unfortunately the child suffered from acute malnutrition; she came to the hospital very late with acute gastro-enteritis which turned into a multi-organ failure, by the time she arrived at hospital. But she’s getting better.”