Yemen: “The situation is worse with every passing day”

Rising numbers of malnourished children being admitted to Abs Hospital

16th December, 2021- Malnutrition in Yemen is a health issue that predates the beginning of the current conflict. But in the Hajjah governorate and its surrounding areas, in northwestern Yemen, the nearly seven-year long war has exacerbated malnutrition. This is particularly the case among children under five years old, with Médecins Sans Frontières (MSF) data showing an alarming rise in cases in 2021.

“A nearly seven-year long conflict has badly affected the country’s economy and weakened an already fragile healthcare system,” said Nicholas Papachrysostomou, MSF Head of Mission in Yemen. “The situation is worsening with every passing day.” 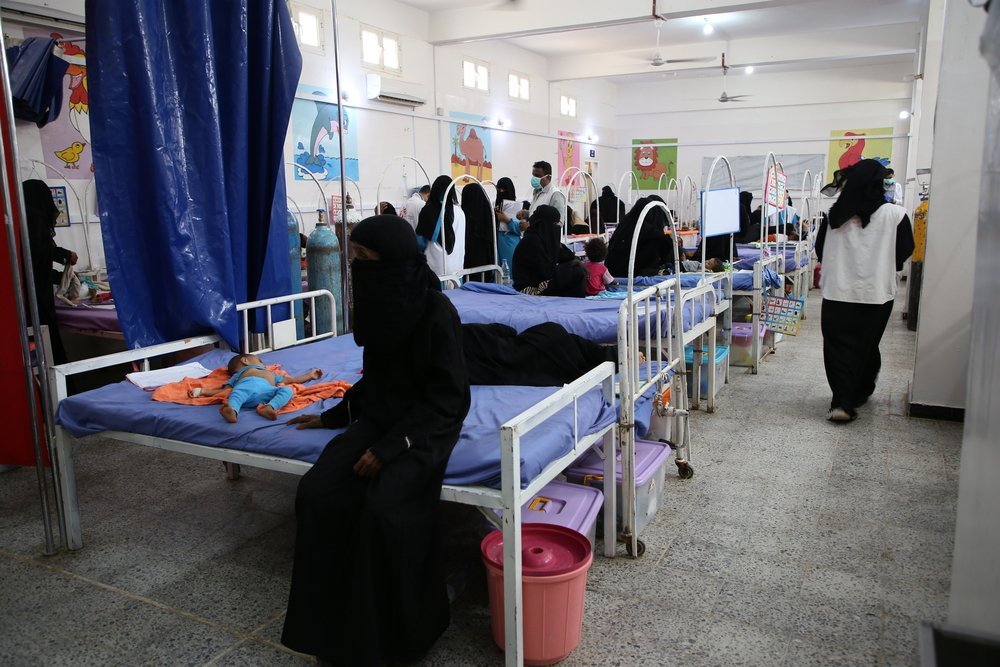 Nuha Haider/MSF
A view of the inpatient therapeutic feeding centre supported by MSF at Abs Hospital in Hajjah, Yemen. (September, 2020).

The Inpatient Therapeutic Feeding Centre (ITFC) in Abs Hospital has been running at more than 100% capacity since the beginning of 2021.

“The situation is worsening with every passing day.” 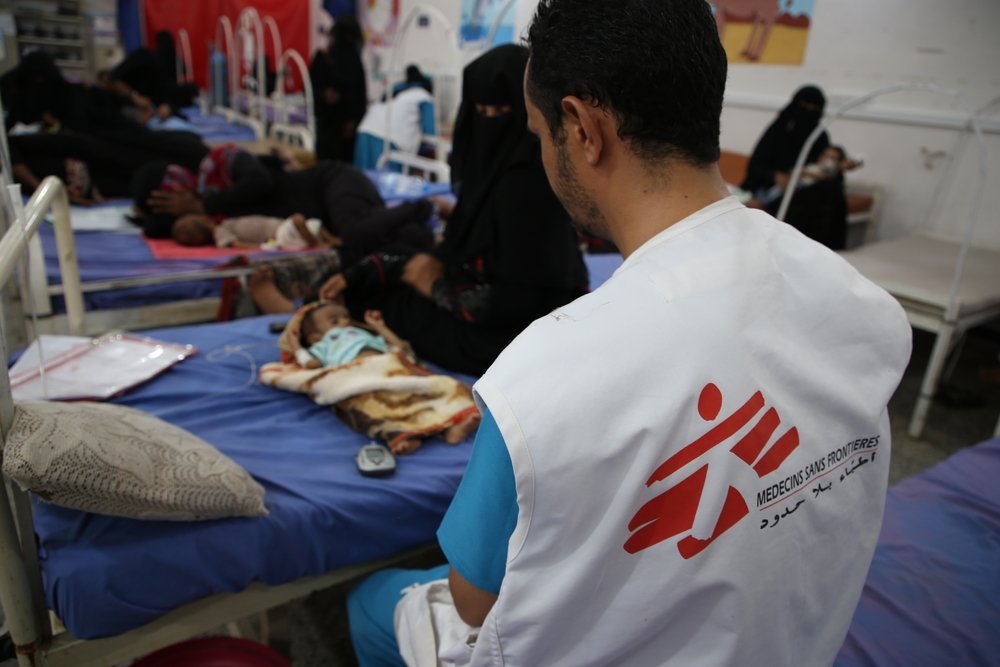 Most concerning for medics are the children who return to the MSF-supported ITFC in Abs Hospital. These children deteriorate again after already having been treated, often because they have not been able to access follow-up care regularly or because there are shortages of therapeutic food. 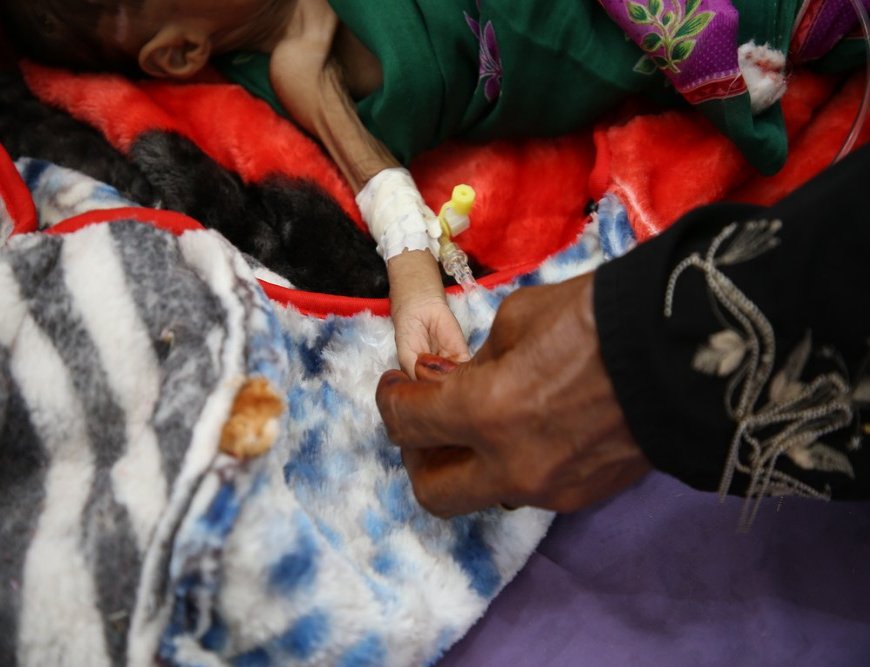 This can become a vicious cycle as the children are treated repeatedly for malnutrition, while its underlying causes relating to the crisis remain unaddressed.

The causes of malnutrition in children go beyond a simple lack of food. “Malnutrition in Yemen has been at times attributed to famine, which gives the impression that the country doesn’t have enough food for its population,” says Papachrysostomou.

"Our concern is that in fact people may not be able to afford to buy food that otherwise exists.”

Many Yemenis are either unpaid for their work or have lost their livelihoods due to the conflict. On top of this, the depreciation of the Yemeni currency coupled with high prices of food, fuel and other necessities has eroded people’s buying power. 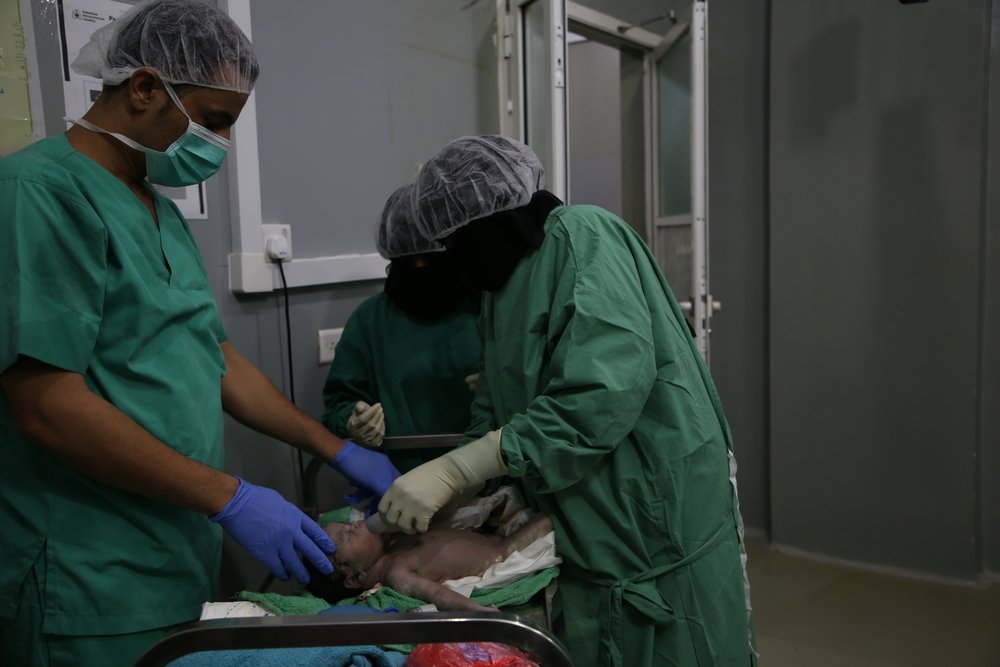 Abs and surrounding areas currently host around 55650 households displaced due to the conflict; most of them rely on humanitarian aid for survival.

As a result, many families struggle to afford the right quantity and quality of food for their children.

Poor health and breastfeeding practices further aggravate the situation. Medics in the ITFC at Abs Hospital observed that out of all malnourished children admitted in 2021, around 33 percent are aged between one and six months. 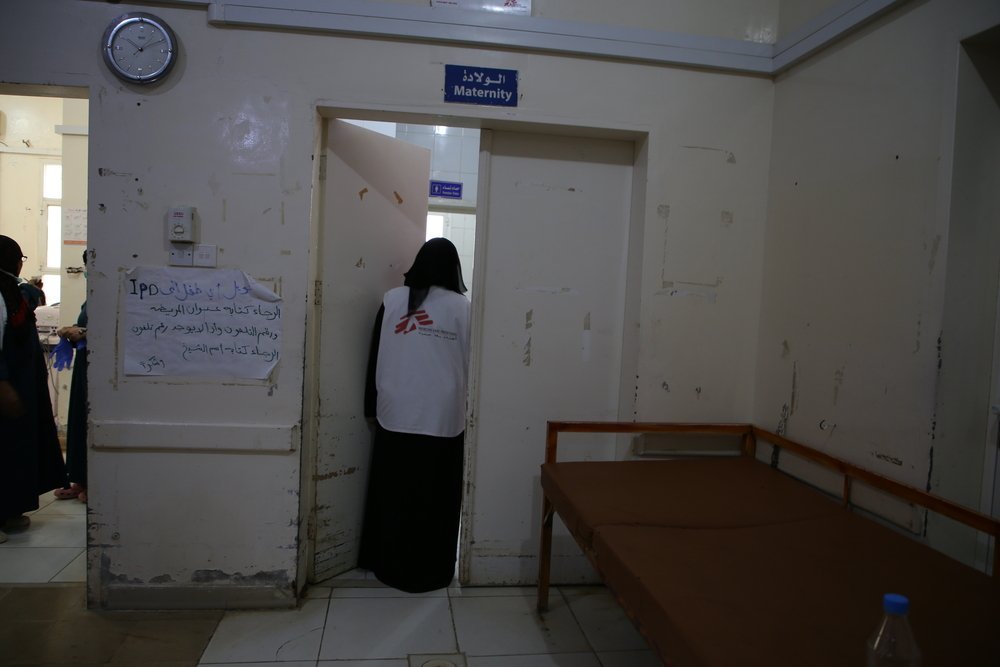 An almost non-existent primary health care system has made access to healthcare very difficult, if not impossible, for many pregnant women, mothers and newborn children, and an undernourished mother is more likely to give birth to an underweight child.

Many of the severely malnourished children MSF admits can be treated at an outpatient facility without requiring hospitalization.

However, people do not always find outpatient-feeding centers close to their homes, especially in more remote areas. 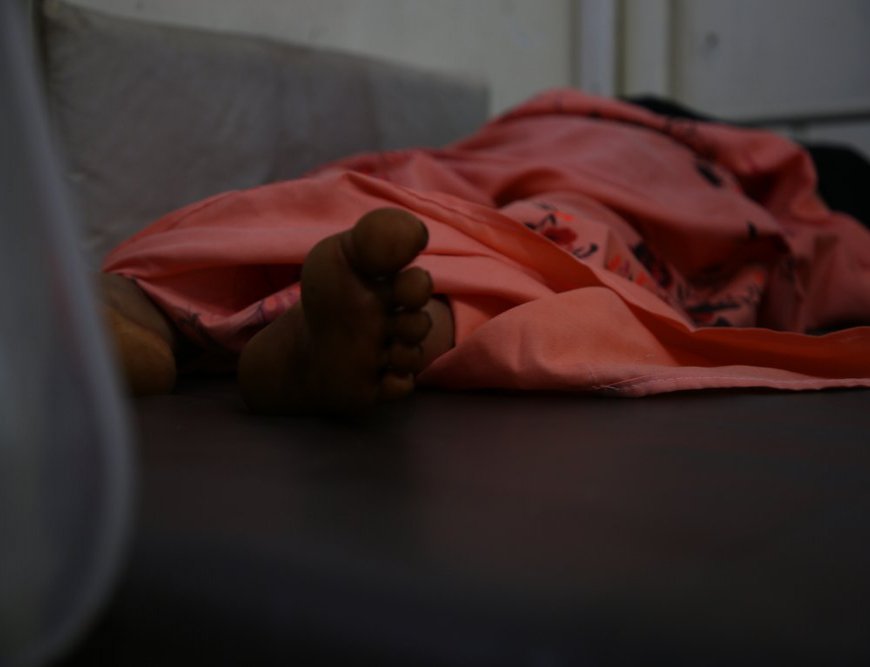 Consequently, a child suffering from moderate malnutrition remains untreated for too long, and can end up with a more severe condition requiring hospitalization.

“Due to a very weak system of primary healthcare services in Hajjah governorate, patients often travel long distances and arrive in a critical condition at our facility in Abs Hospital. 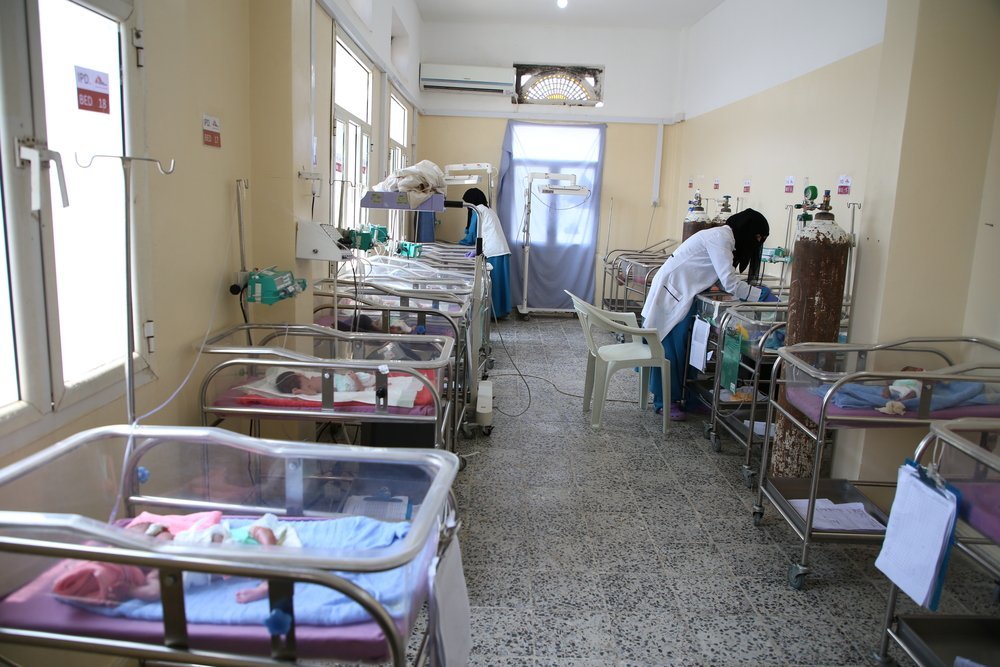 Nuha Haider/MSF
A view of the newborn unit supported by MSF at Abs Hospital in Hajjah, Yemen. (September, 2020).

While the health system needs attention, responding to all basic needs is the only way forward to address the issue of malnutrition. 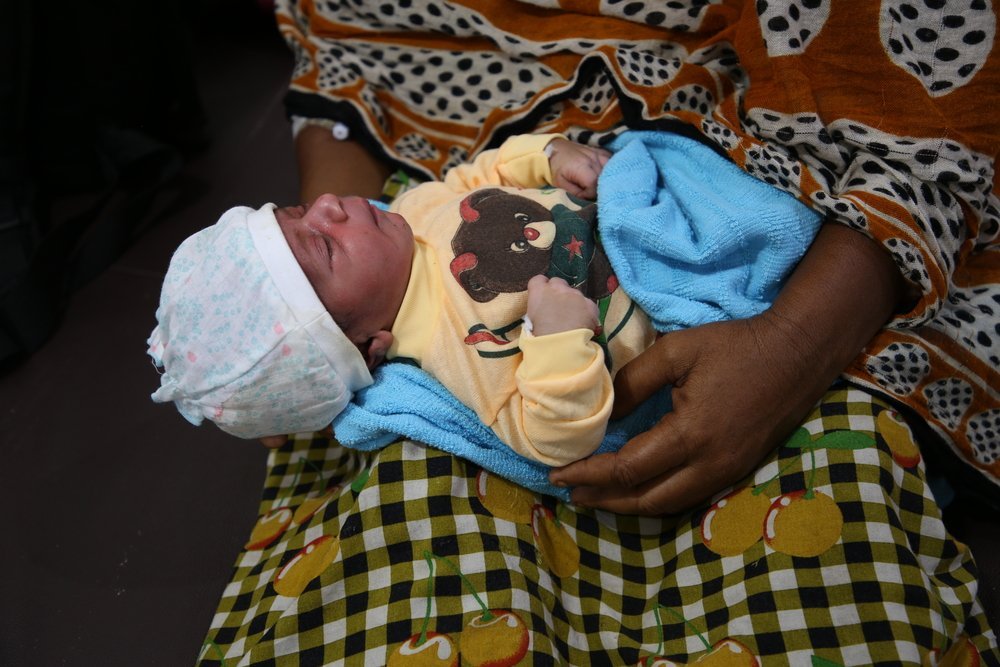 This includes expanding food distribution in areas badly affected by malnutrition and increasing community awareness on the correct hygiene and breastfeeding practices, as well as the early identification of malnutrition symptoms.

At the same time, the financial situation of people affected by the conflict needs to be addressed through economic and infrastructural change as well as livelihood support.

Most importantly, the warring parties must ensure that the cost of war does not fall on those least able to bear it. 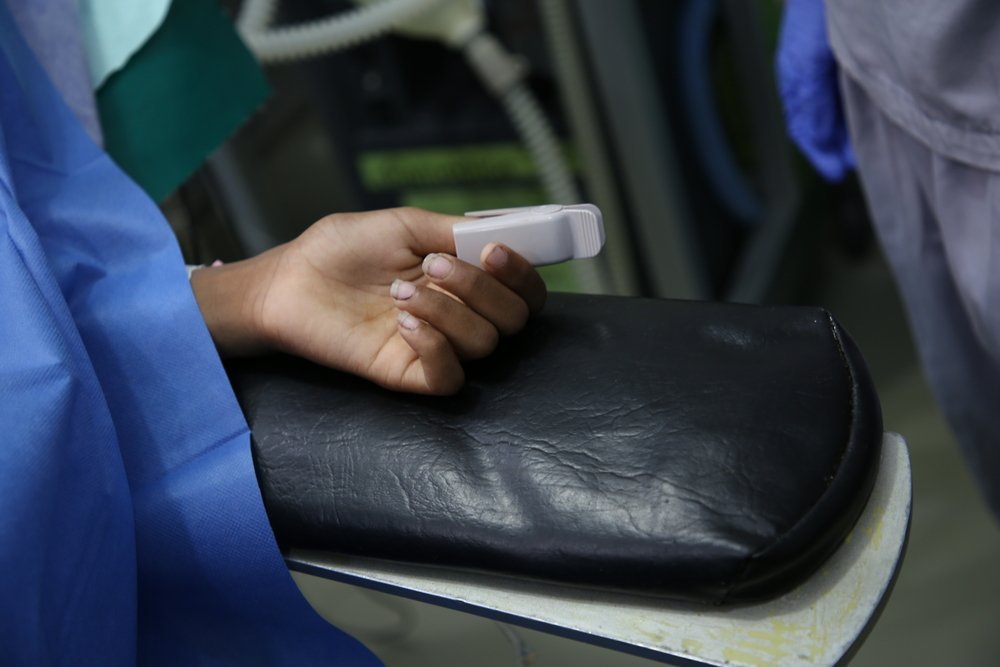 Nuha Haider/MSF
A patient going through emergency surgery at the operating theatre of Abs Hospital In Hajjah, Yemen. (September, 2020).

Without these changes, malnutrition cases among children under five are likely to continue rising both in number and severity.

MSF has supported one of Yemen’s biggest facilities for the treatment of malnutrition in children, Abs Hospital, in Hajjah governorate, since 2016, treating malnourished children with complications through inpatient care.