As neighbouring conflicts continue to spiral, more than a quarter of Lebanon’s population is now made up of refugees, including over a million from Syria.

The MSF team proactively organised the donation of first aid kits to support the Lebanese Civil Defense on the same night.

We are currently assessing the needs of public and private hospitals to provide the required medical and logistic support that they might need to overcome this crisis.

MSF's hospital in Bar Elias is ready to provide medical support for all injured people who have undergone surgeries for wounds from the blast. The hospital is ready and equipped to welcome people who have received surgery for trauma, but are in need of further surgical intervention.

In parallel, our teams are assessing the need to provide support to vulnerable people who lost their homes and people in need of mental healthcare.

Our mental health teams, in coordination with the National Programme for Mental Health by the Ministry of Health, will join efforts to provide psychological help for those in need. 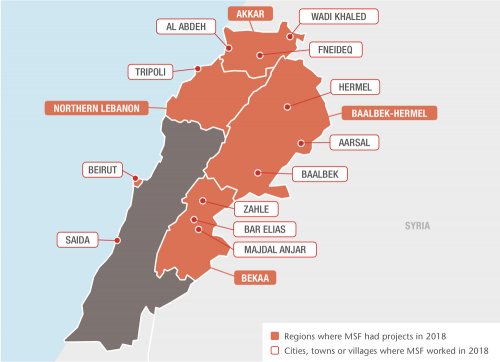 More than a quarter of people living in Lebanon are refugees, including over one million from Syria.

In its heyday, comparisons were often made of the small Mediterranean country with Switzerland because of its economic power and diversity.

But today, it is struggling to cope. The civil war in Syria is putting a colossal strain on its neighbours, including Lebanon whose population stands at just four million.

Médecins Sans Frontières/Doctors Without Borders (MSF) has been working in Lebanon since 1976, when we began our response to the 15 year civil war.

Today, we are helping those seeking refuge from one of the worst conflicts in modern history.

More than a million people have fled into Lebanon since the conflict in neighbouring Syria began in 2011, making it the country with the largest number of refugees per capita in the world.

Many refugees are living in deplorable conditions with their most basic needs unmet. The huge number of extra people in the country has put a severe strain on services, including the health sector.

Despite the efforts of the Lebanese Ministry of Public Health in supporting primary and secondary healthcare for refugees, the cost of consultations, laboratory tests, and medication remains a barrier for a significant number of refugees.

This reality has prompted us to providing medical assistance to Syrian refugees and vulnerable communities in Lebanon.

We work in the north of Lebanon, the Bekaa valley, south Beirut and Saida, offering free, high quality primary healthcare.