In Syria, civilian areas and infrastructure, including medical facilities, came under direct fire again in 2019. Thousands of people were killed or wounded, and many more driven from their homes.

Millions of people are in desperate need of lifesaving humanitarian aid. 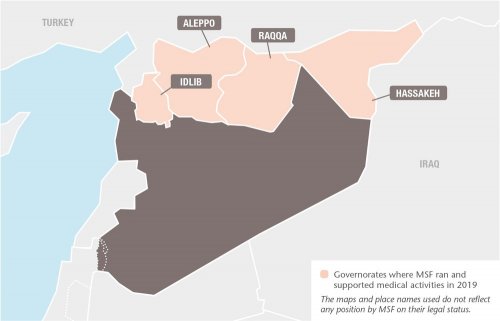 Some 4.8 million people have fled the country and an estimated 6.5 million have been internally displaced as government troops, opposition forces and insurgent groups battle for power and control of territory.

Hear from MSF medics Dr Javid Abdelmoneim, Dr Pippa Pett along with nurse Michael Shek who discuss setting up a trauma stabilisation unit in Raqqa to save lives in the rubble of a city littered with explosive devices.

Médecins Sans Frontières (MSF) continued to operate in Syria but our activities were limited by insecurity and access constraints.

In areas where access could be negotiated, our teams ran or supported hospitals and health centres and provided healthcare in displacement camps, following independent evaluations to determine medical needs.

In northwest Syria, hundreds of thousands of people were displaced as a consequence of the offensive launched by the Syrian government forces and their allies, notably Russia, in Idlib province, the last opposition stronghold, in April 2019.

Most newly displaced people headed for densely populated areas where no clean water or medical care was available. They had few options, as most areas that were considered relatively safe were overcrowded and overstretched in terms of humanitarian assistance.

Schools, hospitals, markets and camps for internally displaced people were also hit and damaged during the offensive. On multiple occasions, most notably in August and from late October, medical teams at MSF-supported hospitals had to deal with mass-casualty influxes, with 10 or more wounded people arriving at once. Some MSF-supported hospitals were damaged by bombing, while others had to reduce or suspend their services, for fear of being hit.

We supported basic and specialist healthcare in several hospitals and clinics in Idlib and Aleppo governorates, in areas such as outpatient and inpatient departments, emergency rooms, operating theatres and maternity wards, in coordination with local partners or health centre managers.

We also continued our co-management partnerships with three reference hospitals, which entail developing medical strategies and protocols with the hospital directors, supporting all services, donating drugs and other medical supplies, and covering the running costs (including salaries).

In Atmeh, we run a specialised burns unit, offering surgery, skin grafts, dressings, physiotherapy and psychological support. An average of 150 procedures per month were performed in 2019, and severe or complex cases were referred to Turkey by ambulance.

We also maintained our support for the key departments in Al-Salama hospital in Azaz, an area hosting a large and increasing displaced population.

In addition, we supported vaccination programmes in health facilities, conducted vaccination campaigns in and around the camps and assisted with lifesaving medication and follow-up for almost 100 patients in Idlib who had received kidney transplants.

In response to the influx of displaced people in Idlib, we increased our activities in the camps, scaling up our distributions of relief items – such as hygiene kits and mattresses – as well as our improvements to water and sanitation systems and donations of emergency medical material.

Following the intensification of the military offensive, we also scaled up the mobile clinics we had been running in displacement settlements, delivering general healthcare, maternal health services and treatment for noncommunicable diseases. 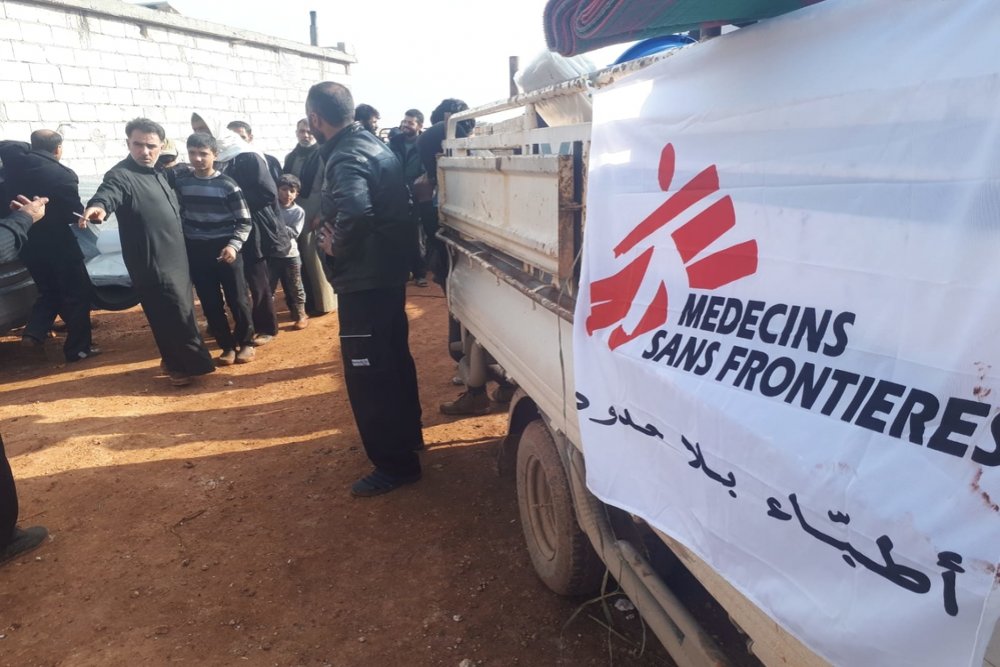 MSF
MSF distributes relief items and provides water to newly displaced people in a camp in northwest Syria, May 2019.

In January, we launched a large emergency response in Al-Hol camp in Hassakeh governorate. The camp’s population of approximately 10,000 swelled after the arrival of 60,000 more displaced people. The camp is made up of 94 per cent women and children, who arrived from the Islamic State group’s last stronghold of Deir ez-Zor.

In a highly politicised and militarised setting, we started by donating relief items and providing emergency care at the reception area of the camp, and then opened a comprehensive healthcare facility offering around-theclock emergency care, and an inpatient nutrition centre. 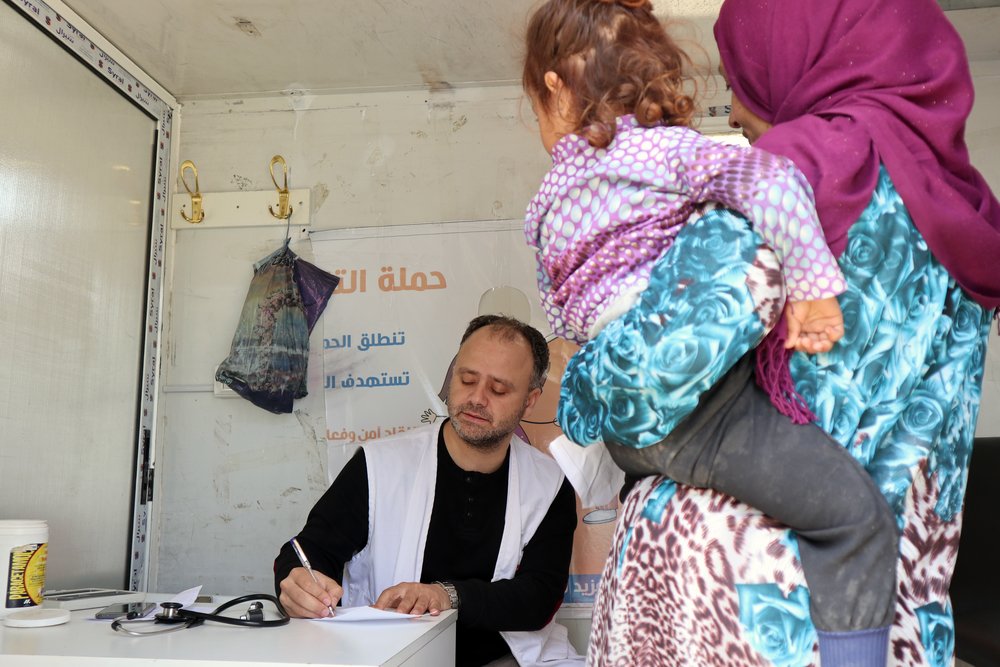 MSF
MSF mobile clinic doctor Mohamed Yaqub conducts a consultation with a woman and her child recently displaced by the conflict in northwest Syria, May 2019.

The situation changed significantly in northeast Syria in October, with the sudden relocation of the US-led coalition forces further east. The Turkish military, alongside allied Syrian armed opposition groups, launched their ‘Peace Spring’ operation, aimed at clearing the Kurdish People’s Protection Units from a strip of land 30 kilometres long and 440 kilometres wide along the Turkish border.

As a result, we had to suspend some projects and temporarily evacuate international staff to Iraq and relocate some national teams to other parts of northeast Syria. 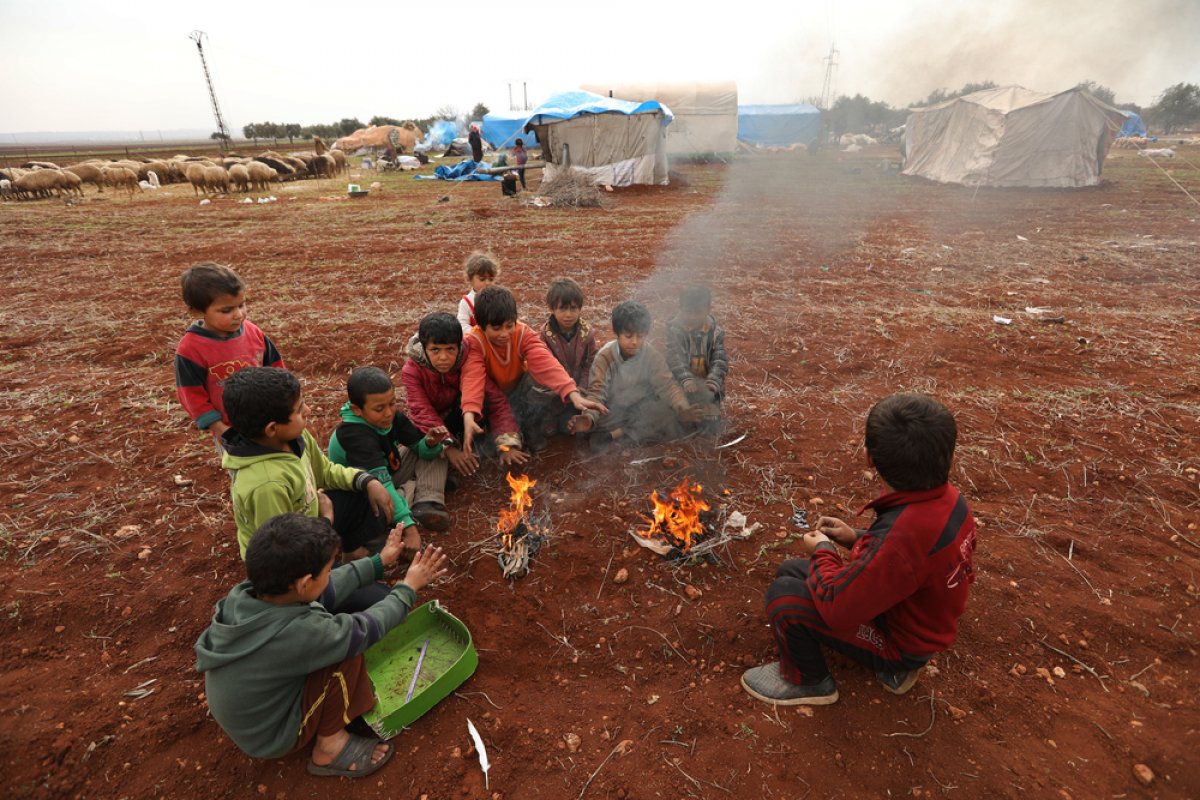 Omar Haj Kadour/MSF
A group of children in a camp for internally displaced people in Idlib, Syria, huddle near a fire to keep warm in January 2018.

In Ain Issa camp, Raqqa governorate, teams provided general healthcare, vaccinations, mental health services and water and sanitation activities until October, when the camp closed and its residents fled because of the fighting and insecurity. We then started supporting the local health authority hospital in Ain Issa with donations of medical supplies, before withdrawing due to insecurity.

Comprehensive medical activities, including thalassemia treatment for more than 280 patients, were also suspended in Tal Abyad hospital after Turkish-backed groups took control of the area. Our programme in the hospital closed towards the end of the year, as we were unable to negotiate the resumption of our activities with the newly installed authorities.

In Raqqa city, we continued to run a general healthcare centre offering emergency care, outpatient consultations, mental health support and vaccinations. At Raqqa National Hospital, MSF completed a large rehabilitation of the facility, then set up and supported emergency, inpatient and post-operative care, general and orthopaedic surgery and radiology, as well as the blood bank and laboratory.

We continue to support these activities at the hospital with regular donations of medical supplies and financial assistance for health workers.

We maintained our support for the maternity hospital in Kobanê/Ain Al-Arab, in Aleppo governorate, with provision of medical supplies and financial support to health workers. We continued to support routine vaccination programmes (EPI) in 12 locations across the district and donated relief items to displaced families from Tal Abyad and Afrin.

Following the temporary evacuation of our international colleagues, we were also forced to suspend our activities in Tel Kocher in Hassakeh governorate, where we run a general healthcare centre serving a vulnerable Arab community, offering paediatrics, services for pregnant women and patients with chronic pathologies.

From November, we gradually resumed some medical activities and started to deploy mobile clinics to assist displaced people in Newroz camp.

In October, our teams distributed relief items to displaced people living in camps, schools or with families and friends in Tal Tamer, Hassakeh and Newroz camp. We donated hygiene kits, blankets and multi-purpose tents.

In Tel Kocher, we provided hygiene kits and blankets to victims of floods and donated 1,000 blankets and a tent for triage to Hassakeh National Hospital during a mass casualty response.