DRC – responding to the new Ebola outbreak in Équateur province

“The epidemic is moving with people by land and river, to remote areas, in a province where infrastructure is scarce and villages far from each other”

Declared while DRC was still grappling with the tenth Ebola epidemic in the country’s northeast, and amidst the COVID-19 pandemic, this new Ebola outbreak has already spread to 11 health zones in the province, in a very hard-to-reach region where some villages are only accessible by river. 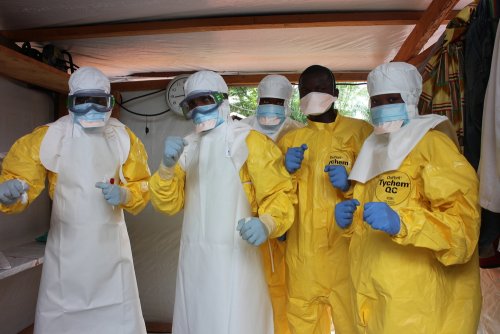 MSF/Franck Ngonga
These medical workers from the MSF-supported Boso Mondomba isolation centre are on the front lines against the new Ebola epidemic in Equateur province.

Équateur province is four times the size of Belgium, with some health areas only accessible by river using canoes or after hours of difficult transport by rough roads through the forest. Only one helicopter is available to humanitarian organisations to move around the region.

“We deploy these stocks according to the difficulties of the areas. And in Equateur province, challenges are massive! To reach the health zone of Bolomba for example, we had to go up the Likelemba river with all the equipment and our team on canoes.”

Be as close as possible to the hotspots

Following the declaration of this eleventh Ebola epidemic in DRC, MSF deployed teams to the health zones of Bolomba, Bikoro, Monieka, Ingende and Lotombe in order to curb the spread of the disease, support community surveillance and provide rapid treatment to patients living in hard-to-reach areas. 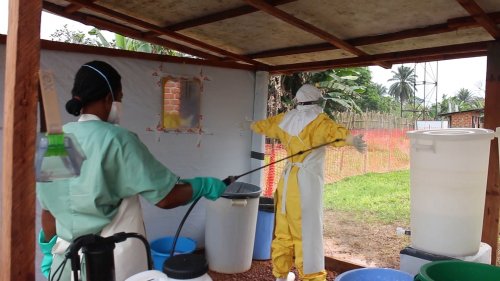 MSF/Franck Ngonga
A medical staff has his personal protective equipment being disinfected before leaving ​​the MSF-supported Ebola treatment center in Bolomba.

“The epidemic is moving with people by land and river, to remote areas, in a province where infrastructure is scarce and villages far from each other,” said Dr Maria Mashako, MSF medical coordinator.

“That’s why MSF is setting up a decentralised response and deploys our teams in the most remote, affected health areas, with small structures easily accessible to the communities.” As of 1 September, 2020, MSF teams are supporting nine treatment and isolation centres in five health zones to provide care as close as possible to the active hotspots of the disease.

In Bolomba health zone, in addition to the support provided to the Ebola treatment centre at the general hospital, we set up two small treatment and isolation centres in the remote health areas of Boso Mondomba and Yuli. The same decentralised approach has been adopted in the health zones of Monieka and Bikoro, where MSF is supporting four small care and isolation structures in difficult-to-access health areas. 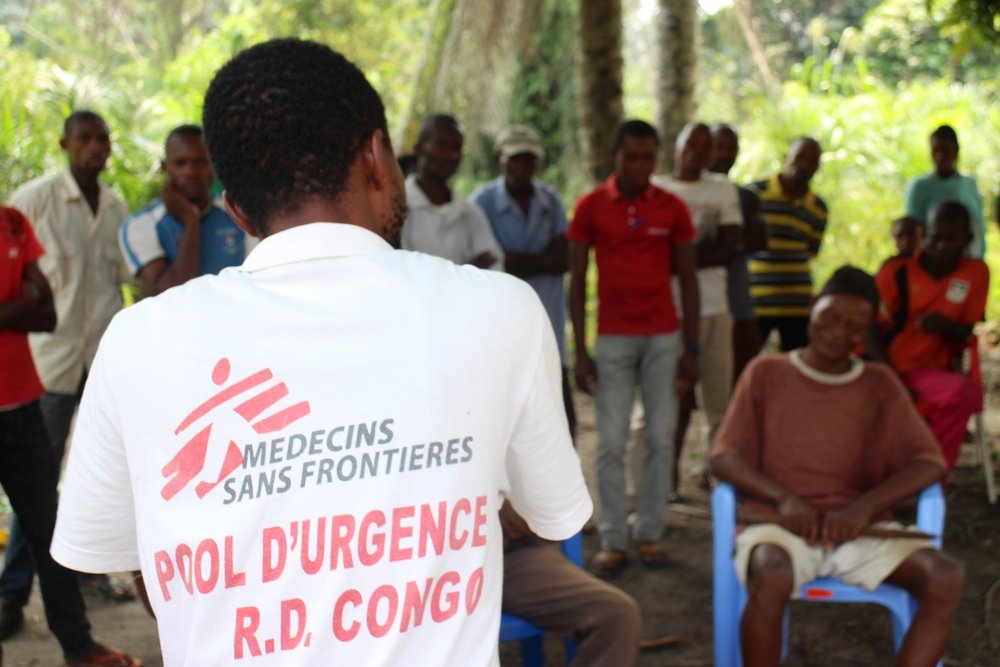 “We do not limit ourselves to supporting the response to the Ebola epidemic alone,” says Dr Mashako. “We are also supporting health centres in the hotspots and on the major axes of Bolomba and Bikoro, in order to guarantee the continuity of primary health services there, and allow early detection of suspected cases. This is done, for example, by donating drugs, training local medical personnel on Ebola or strengthening infection prevention and control measures.”

Little information is circulating on Ebola in the province, and the epidemic is affecting some health zones for the first time ever. That’s why our health promotion teams are supporting those of the Ministry of Health to strengthen awareness and community-based surveillance. In Bolomba, Bikoro and Monieka, this is one of the key activities done by MSF. 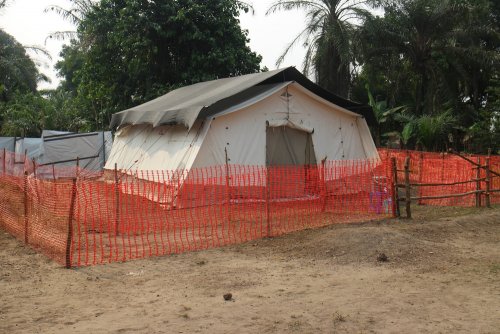 MSF/Franck Ngonga
Ebola isolation center set up by MSF in Ikoko Bonginda health area, Bikoro health zone. This facility has a capacity of 6 beds. The medical strategy adopted for this response is to bring health care closer to the affected, remote communities.

“My daughter died of Ebola. Two days later, I was also hospitalised,” says Samwengi Bokuma. “I was luckier, I survived. To prevent further tragedies in the community, I joined the MSF outreach team to share my story with my community. To explain to them what the symptoms of the disease are.”

“This community-based approach allows communities to detect suspected cases and quickly escalate alerts,” explains Dr Mashako. “It leads to an ownership of the response to the epidemic by the communities themselves.”

These decentralised and community-based approaches to responding to the outbreak are also complemented by a vaccination programme supported by other partners in the response. Since the start of the vaccination on 5 June 2020, the vaccine (the ZEBOV-GP vaccine, already used in the northeastern provinces during the tenth epidemic) has been administered to approximately 26,500 people, according to official data. 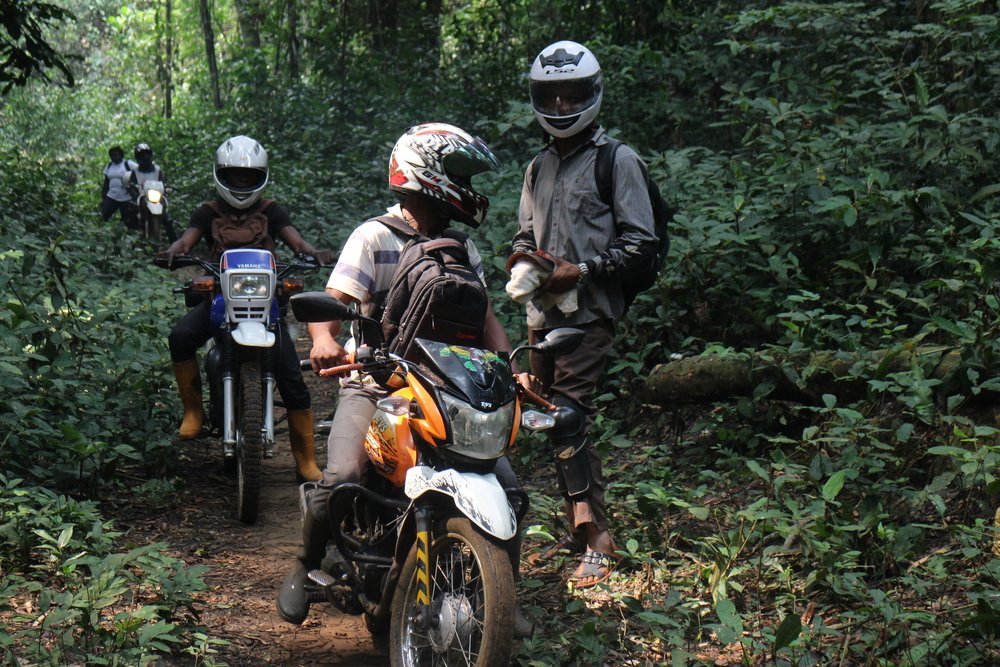 MSF/Franck Ngonga
To reach the most remote health areas in Bolomba, MSF teams use motorcycles in the middle of the equatorial forest.

As of September 2, a total of 110 Ebola virus disease cases had been recorded in Equateur province – 104 confirmed, 6 probable – with 47 deaths. Équateur province experienced its last Ebola epidemic two years ago, between May and July 2018. The health zones of Bikoro and Iboko, as well as the town of Mbandaka in the province, were the epicentre of DRC’s ninth Ebola outbreak.

our work on ebola>