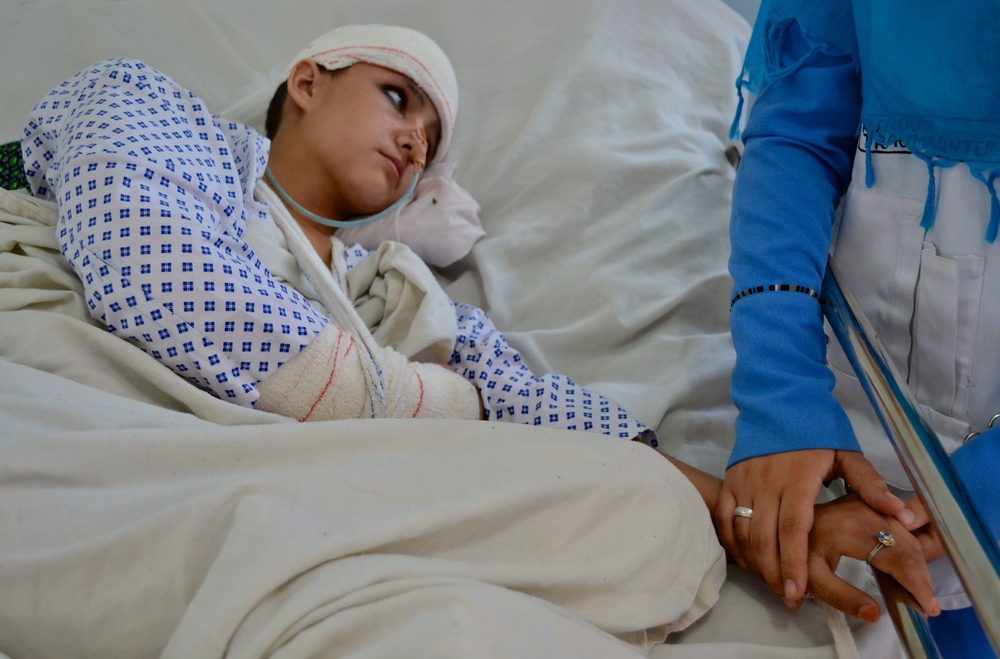 Afghanistan: Caught in the spring offensive in Kunduz

Her sister-in-law, Oura, holds her elbow for support, closely watched by MSF orthopaedic surgeon Javed. After 10 faltering steps, Bibi is exhausted, and Javed takes over to carry her back to her bed.

Bibi was admitted to Médecins Sans Frontières/Doctors Without Borders' (MSF) Trauma Centre in Kunduz, northern Afghanistan, 10 days ago with two bullet wounds to the abdomen. 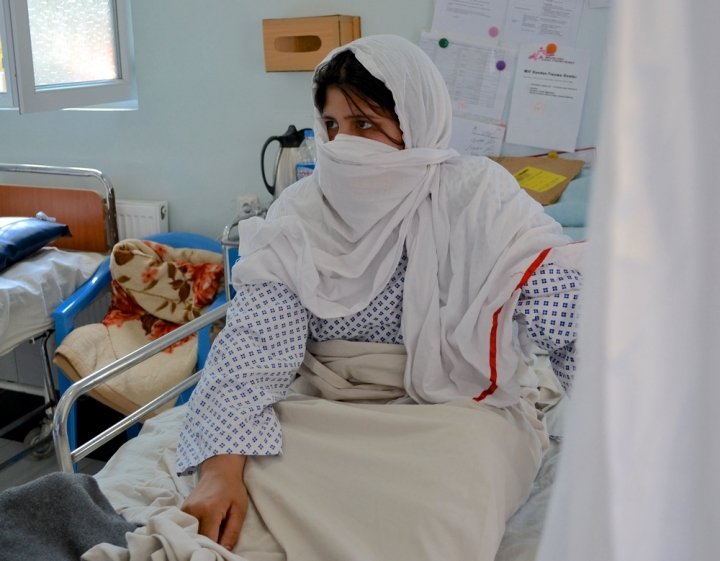 MSF
Bibi Aisha is 18. A bullet crossed her body while she was trying to flee the fighting in her village with her family. She was shot on the road in a truck.

“We couldn’t sleep at night and we heard the planes hit the neighbouring villages,” says Oura. Ten days ago, along with thousands of other families, she and nine of her relatives fled their homes to find shelter in Kunduz city.

They travelled in a trailer, hitched behind a truck. Sitting surrounded by bags of flour, rice and clothes, they had no idea when they would next see their homes.

On the road out of their village, they got caught up in crossfire. As they ducked in panic, Bibi was hit by a stray bullet, which entered her abdomen above the hips and passed out the other side.

Instead of heading straight for Kunduz city to get medical assistance, the truck driver was forced to take a detour to neighboring Chardara district because the road ahead was too dangerous to use.

“We knew that the road to Kunduz city was mined,” Oura says, “so we drove towards Chardara as fast as we could.”

In Chardara, they moved Bibi into a boat to reach Kunduz city by river. “Bibi was crying, but she wasn’t bleeding, so we thought it was ok,” says Oura.

At this moment Bibi raises her eyes and speaks for the first time. “It hurt so much I couldn’t scream,” she says.

Two hours after the shooting, they made it to Kunduz Trauma Centre. Bibi’s abdomen was perforated and she was bleeding internally.

“We stabilised her right away and took her into the operating theatre a minute later,” says MSF surgeon Troels.

“There was a big hole in her stomach that I had to suture. We also cleaned the two bullet wounds and closed them.” 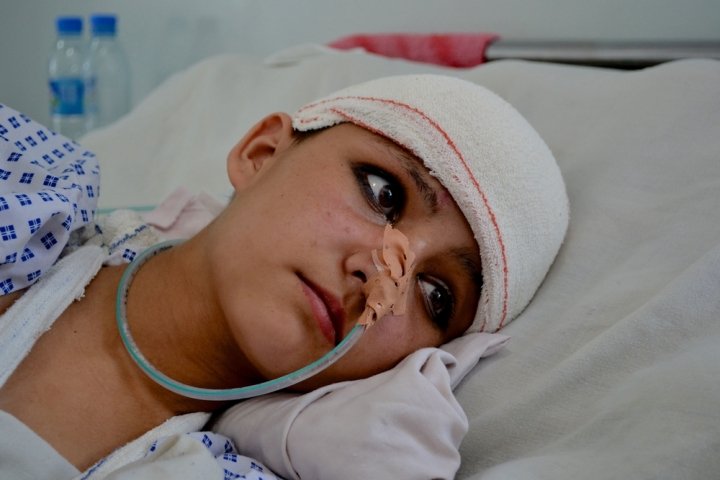 MSF
Najiba,14, another patient at MSF's Kunduz Trauma Centre, was in her kitchen when a rocket fell on her house and caused the roof to collapse on her. When her family found her body, they thought she was dead. But the villagers realised that she was still breathing and took her to Kunduz.

Bibi came round from the anaesthestic in the intensive care unit, where she stayed for six days before being transferred to the women’s ward.

Bibi is making good progress. “It’s encouraging that she wants to try to walk,” says Troels. “She can even eat; she’s going to recover.” Oura is reassured.

Soon they will be able to return home, despite the fact that fighting continues in the area where they live.

After 10 days staying with relatives in Kunduz city, the family has already packed their bags to return to the district.

“We have hardly anything here,” says Oura; “we’d better get back to our hens.”

While Kunduz had been considered one of the more stable provinces in the ongoing conflict in Afghanistan, since last year, there has been a significant increase in fighting, with the current ‘spring offensive’ seeing an intense level of combat.

In the three weeks since the announcement of the annual ‘fighting season’, medical staff at MSF’s trauma centre have treated 204 war wounded patients, the vast majority of them injured by gunshots or bomb blasts.

Of these patients, 51 of them were women and children.

“The proportion of war-wounded patients in the centre has more than doubled compared to the same period last year, from six percent to 14 percent,” says Laurent Gabriel, MSF coordinator at the trauma centre.

“The surgeons are dealing with severe abdominal and chest injuries, with many patients requiring a series of complex surgical interventions.”

MSF
Ahmad Jan is 80 years old and he was caught in a crossfire in his village while tying to go to the bazaar. He was taken from his district of Imam Sahib to Kunduz City by local villagers. The road was very unsafe and it took more than an hour.

The situation is volatile, with the flow of wounded arriving to the emergency room sporadic, ranging from five war-wounded in one day to as many as 35 on another.

The daily variation in admissions reflects the unpredictability of the conflict, as well as the difficulties that people in the districts have in accessing the hospital in the city.

“It is difficult to have a clear view of what is happening in the districts outside the city, where fighting is ongoing”, says Gabriel.

“We are very concerned that people living in these areas are not able to make it to the trauma centre for treatment in time, due to the continued fighting, and the fact that they have to face numerous checkpoints to get into the city.

“Our patients tell us that some roads to Kunduz city are mined, forcing them to take long deviations to reach the town. Given the severity of the injuries, this delay can be fatal.”

MSF started working in Afghanistan in 1980. In Kunduz, just like in the rest of Afghanistan, both national and international staff work together to ensure the best quality of treatment.

In Khost, in the east of the country, MSF operates a maternity hospital. MSF relies only on private funding for its work in Afghanistan and does not accept money from any government.

Find out more about MSF's work in Afghanistan