Afghanistan: ‘Crying, screaming, everyone was afraid’ – Treacherous journeys to escape violence in Helmand

On 3 May, very heavy fighting broke out around Lashkar Gah city, Helmand province, Afghanistan. The city’s main trauma hospital had to focus on the most critical cases, with other patients referred to the MSF-supported Boost hospital. In one week, MSF treated 93 war wounded patients, 53 on 3 and 4 May alone. MSF treated people for bullet wounds and shrapnel injuries. Today, after a short respite over Eid, the fighting is ongoing and MSF is again treating war-wounded patients.

In recent years, southern Helmand province has been one of areas most affected by the ongoing conflict in Afghanistan, with violence flaring in October last year.

Below, patients, caretakers and staff share their stories from the first 48 hours of the violence. They describe chaotic scenes as people escaped the violence, some were injured in the crossfire. 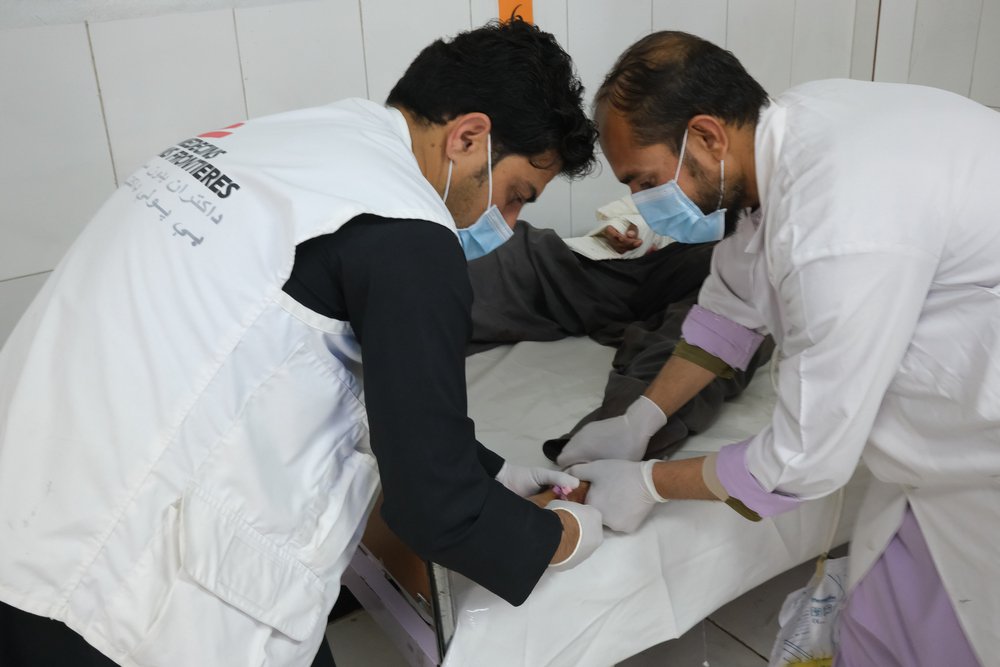 From 3 May many people fled into Lashkar Gah city leaving their homes and possessions behind.

Access routes became blocked and some were forced to make long, dangerous and circuitous journeys.

The conflict and the access issues made it much harder to seek healthcare, with people forced to wait for the fighting to die down or take their chances travelling to the city. 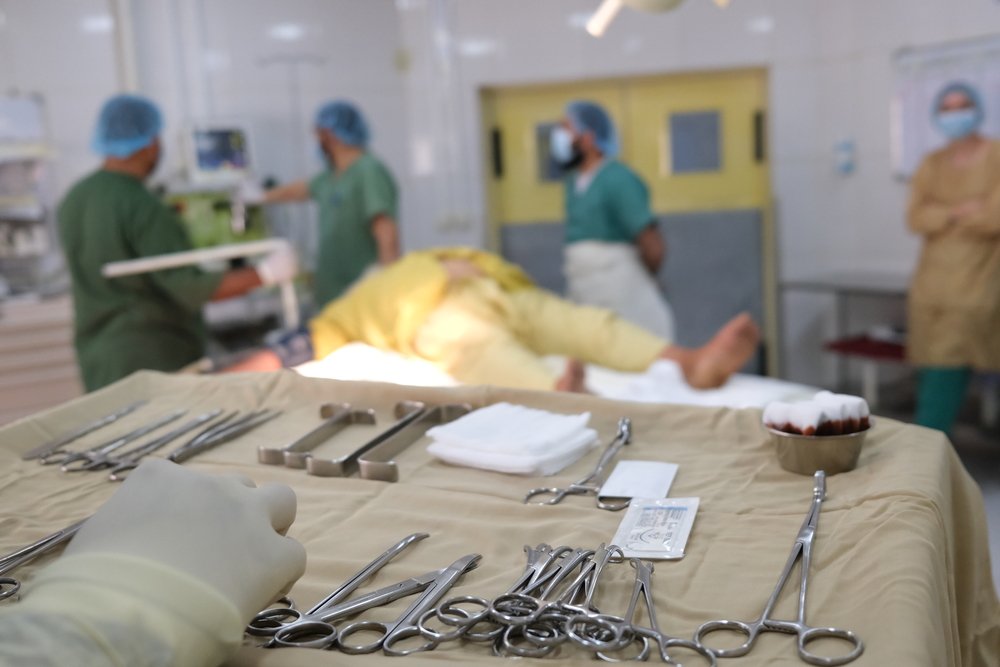 Patients have said that bridges have been destroyed, impeding access even further.

Despite the influx of war-wounded, the number of overall patients in the MSF-supported hospital dropped; in the first three days of fighting consultations in the emergency room and admissions to the maternity both fell by 20%. 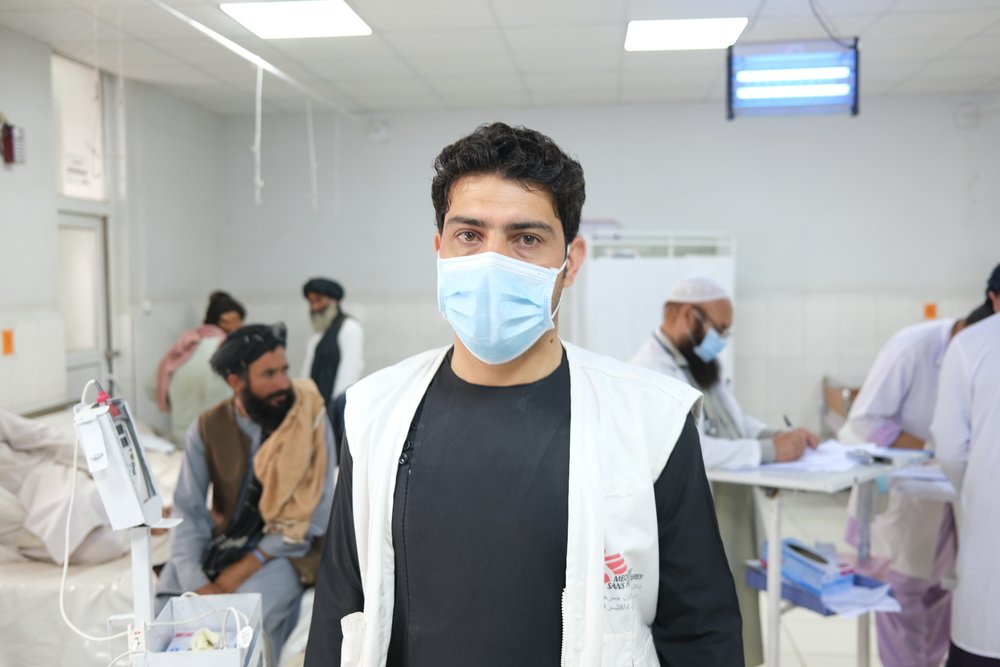 MSF/Tom Casey
"Yesterday we saw a lot of war-wounded, but most of the people we normally treat, such as children under five, are staying at home” MSF Emergency room supervisor Masood Khan after heavy fighting around Lashkar Gah city.3 May 2021. Boost hospital.

Boost hospital is the only referral hospital in the province and is a lifeline for those living in Helmand.

The hospital serves a population of around 1.3 million people and last year provided over 110,000 consultations, assisted over 17,000 births and performed over 4,900 surgical interventions.

Mahmood was shot while he and his family fled their home outside Lashkar Gah. ‘All my family depends on me but now my arm is injured. It’ll be very hard for me to feed my family. I’ve left my home and I cannot go back there'. Boost hospital.

Pregnant women, malnourished children and others still need medical care but now they find it much harder to reach.

The violence touches every facet of people’s lives and some lose family members, their homes and their possessions.

There are those that manage to flee, and others don’t get out in time.

Ahmadullah is the uncle of Samiullah, 12, who suffered a gunshot wound to the head on the first day of the fighting

“He lives between the district where the fighting was happening and the city, near a checkpoint. The clinic is far from the house, near the district office, and on that day, it was surrounded by fighters. 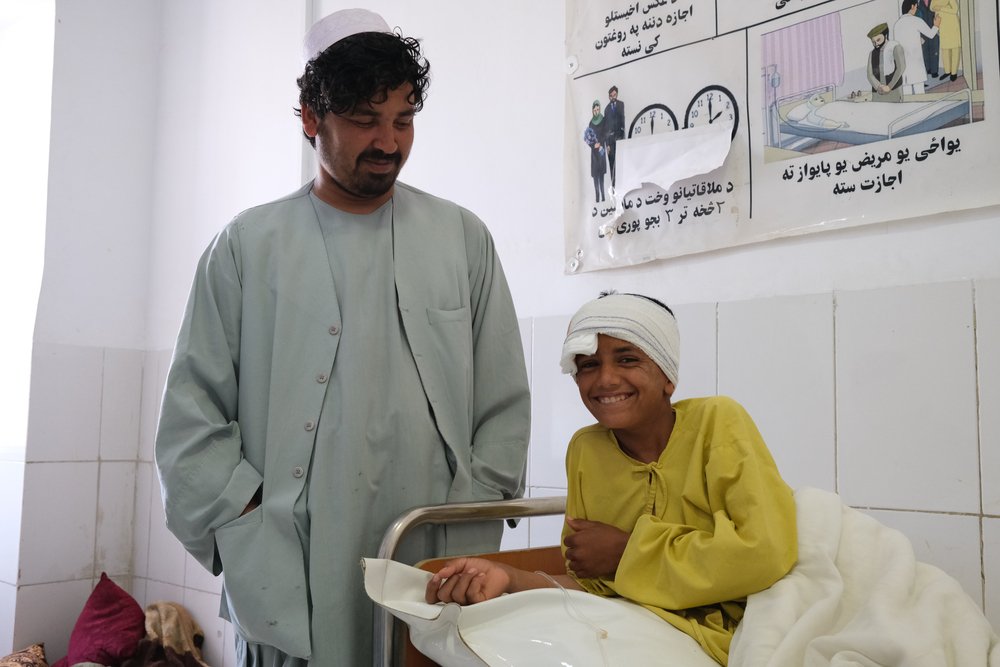 Ahmadullah with his nephew Samiullah, 12 years old, who suffered a gunshot wound to the head on 4 May. Boost hospital, Helmand province, Afghanistan

No men were at home when Samiullah was shot, so the women brought him to another village, crossing the lake on foot to get there. When they reached the village someone with a motorbike brought my nephew to the city.

A five-minute journey took two-and-a-half hours and they went the back way. Fighting was ongoing on the main road.

No-one could take the highway, the paved roads, they had to go from field to field. 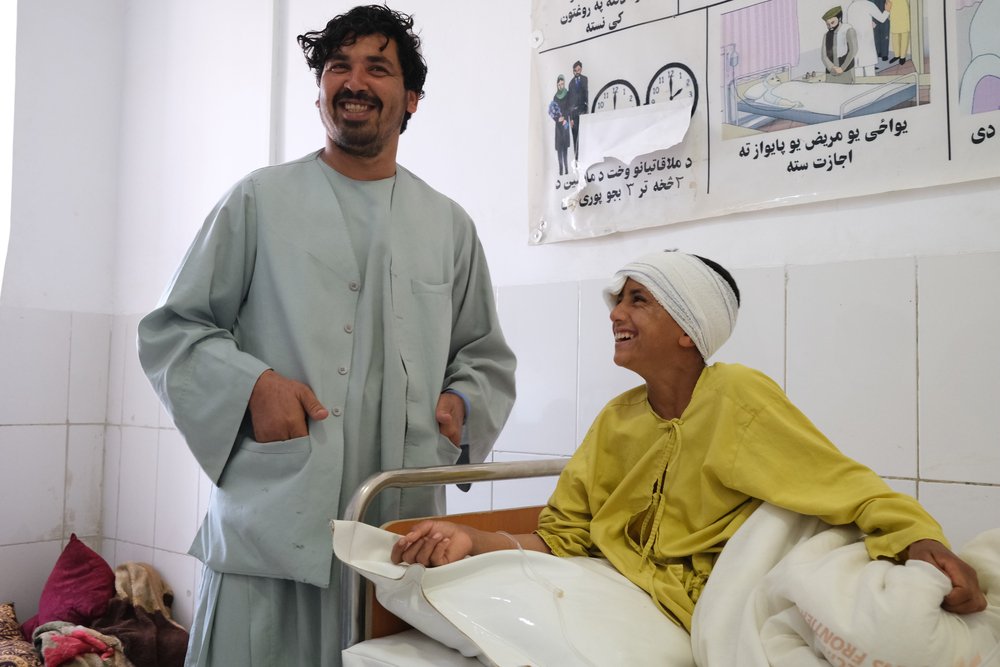 MSF/Tom Casey
Samiullah and his mother had to cross people’s gardens and a river, travelling for two and a half hours to avoid fighting before reaching hospital. Boost hospital, Helmand province, Afghanistan

Samiullah went to the operating theatre to have small pieces of the bullet removed from his head. He’s doing very well compared to when he first came.

After being discharged from here he will come back to my house as he needs to return to the hospital, and for the time being no-one can reach where he lives.”

A mother with her child in the Emergency Room

“My son is 11 years old and he has been suffering from diarrhoea and fever for about 10 days. He’s very weak and very pale. The local doctors couldn’t treat him.

We left in the morning from Babaji when the sun was rising. We had to cross the river and our motorcycle stopped working so we left it behind; my son was very weak and couldn’t move on foot. There were bullets in the air as we travelled.

"Even in a film, in a movie, we cannot find anything as dangerous as this"

An MSF nurse who works in the neonatal intensive care unit

We brought him here because we thought he might die. The journey took us five or six hours instead of 30 minutes. There were so many obstacles on the way.”

Shagul is with Maliha, her 8-year-old granddaughter who was shot in the abdomen.

“My husband took Maliha and the others to the mosque to pray and then break their fast. Maliha was shot at prayer time, outside the mosque.

We had no transport to bring her to hospital, but people helped us. A man brought his motorcycle but as the way was blocked, they had to use a very far away road to reach the hospital. 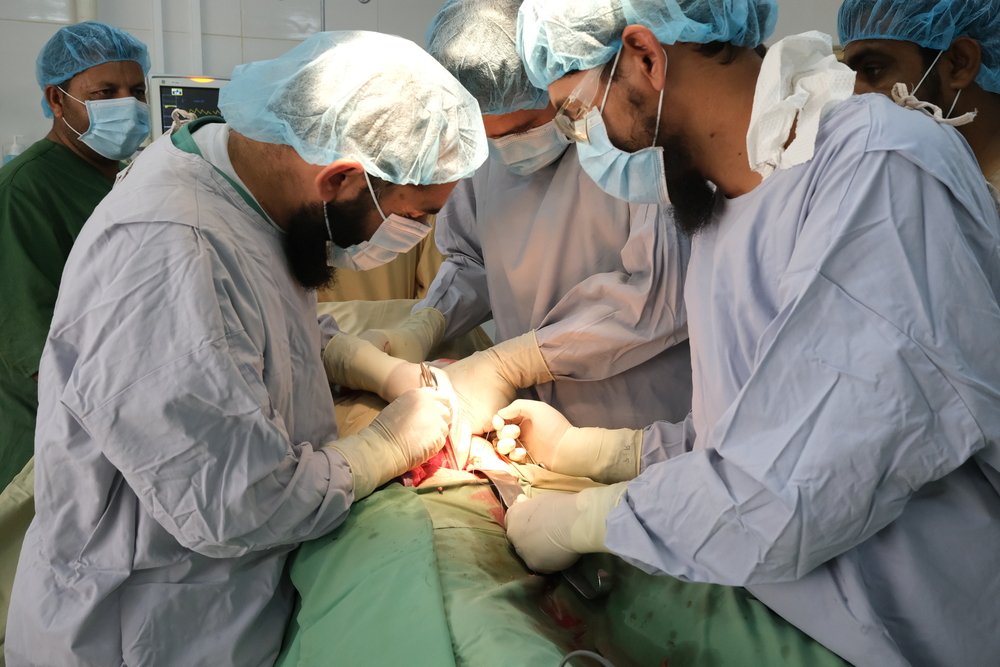 Her grandfather went with her and she was bleeding a lot. He was hugging her. They reached a small river that they couldn’t cross.

There was shooting in the area and there were many people on the road. They took other small roads, as they couldn’t travel on the main road.

I didn’t watch the clock, but it was late at night when she arrived at the hospital. We worried all night, and I came in the morning. I don’t have information about anyone else in the family because the phone is not working

We are so tired of this war.”

An MSF nurse who works in the neonatal intensive care unit

“Our home is in Bolan, and yesterday the fighting started in our village. People were crying and screaming, everyone was afraid.

People who had come from further away arrived running, without shoes, without their hijabs, without anything. And armed men were entering the houses.

Even in a film, in a movie, we cannot find anything as dangerous as this.

A shell fell on our house. One of my cousins died, and another was injured. They were outside the house at the time. My father and brother brought them to one of the city hospitals for treatment. 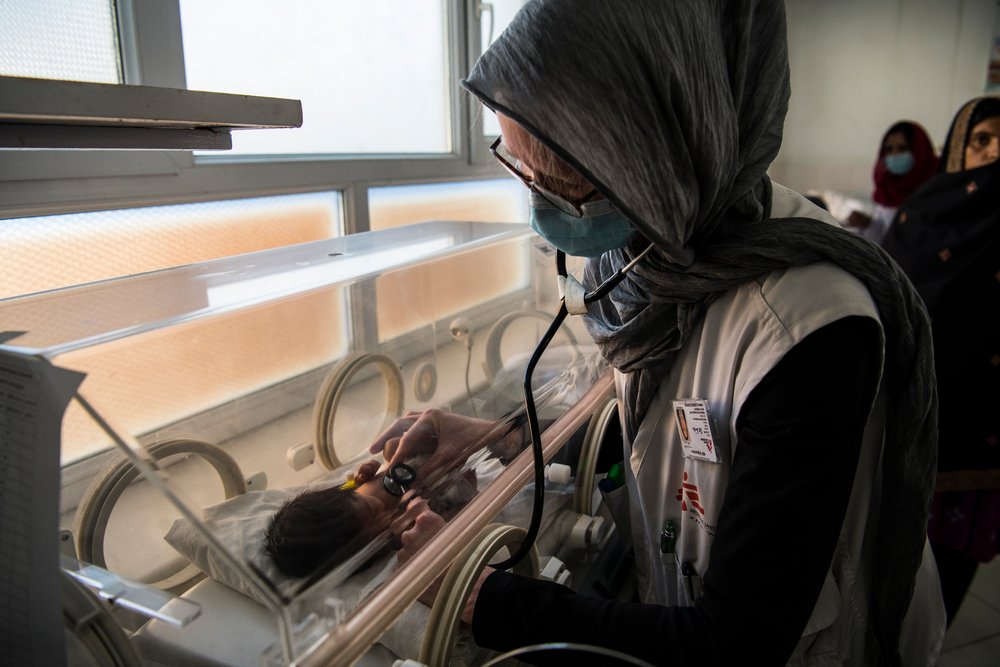 Last night I went to Bolan to fetch my family, my children, and bring them here to accommodation I have rented, a safe place in Lashkar Gah.

There was shooting all around and bullets were entering our home. I had to get them out. Thank God we have enough money to manage this situation, but I know for other people things are very bad.

My father has a shop in Bolan so during the night he went to our home and took all our possessions and put everything in his shop and locked it up. In the morning when my father went back to the shop it had been broken into and everything was lost.

Every important thing that we took from our home, everything is gone. 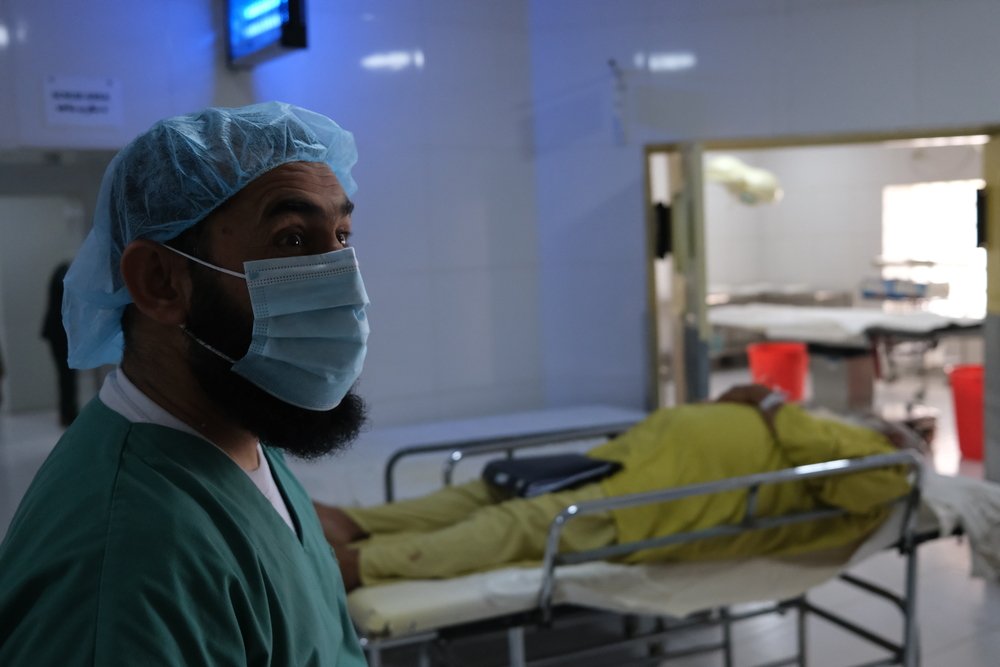 We were in a safe place and suddenly this happened to us.

I have lost brothers, sisters, uncles, cousins and neighbours over the years. They have lost many; some have lost everything.”