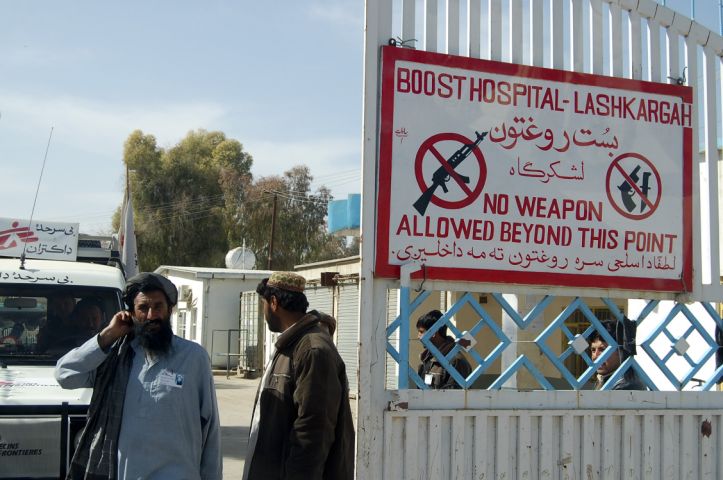 As the conflict spreads in Afghanistan, assistance that is associated with one side of the conflict is actually dangerous for the patient, writes Michiel Hofman, MSF's former Country Representative for Afghanistan.

As dissection of the Obama Administration’s Afghanistan strategy review continues, lost in the debate is the reality for Afghans trapped in the middle of this nine-year war.  For them, seeking assistance provided by either side in the conflict has become almost as dangerous as going without it.

It’s largely taken as a given that all players in the Afghan theatre are “humanitarian.” The U.S. Army, NATO allies, the Afghan government and armed opposition groups all highlight their so-called humanitarian activities as they vie for the hearts and minds of the civilian population.

On the surface, this would appear to only be of benefit in such an impoverished and insecure environment. After all, when you are hungry, you don’t care who gives you a bag of food. Yet, as the war spreads and intensifies in Afghanistan, and the humanitarian needs increase commensurately, it has become ever more dangerous for the Afghan people to receive assistance provided by military bodies or groups affiliated with them. The case for the independent and impartial provision of aid has never been more urgent.

Nearly all of the provinces in Afghanistan are experiencing active conflict. Record-high numbers of attacks restrict the provision of basic services to the people. The best that can be managed during a war—any war—is maintaining lifesaving services in strategic locations, and to try to help patients reach them.  It was for this very reason that international humanitarian law was conceived -- to ensure critical medical care for all during conflicts, delivered independently from warring parties.

For sick or wounded Afghans, going to a NATO-run clinic or receiving assistance from groups affiliated with the NATO counterinsurgency (COIN) strategy risks retaliation from the opposition, be they Taliban or other militant groups. Civilians face the same risks from international and Afghan forces if they turn to the opposition for assistance.

In this environment, seeking help amounts to choosing sides in the war. The result is a tragically absurd catch-22: people put off seeking assistance because doing so can endanger their lives.

The experience of patients assisted by Médecins Sans Frontières/Doctors Without Borders (MSF) in the town of Lashkar Gah, in the battleground of Helmand Province, bears this observation out. Intense conflict in the province has left around one million people without access to healthcare. A patient in our hospital there recently explained that “in our district headquarters hospital there are now military doctors, but we can’t go there. This is a civilian hospital – that’s why we come here. I don’t see any weapons here.  That means you don’t have any problems with the opposition or the international forces.” Another patient said that “no one goes to the NATO clinic because they will become targets. It’s too dangerous.”

Indeed, in August 2009, Afghan and NATO forces raided a clinic in Paktika Province, followed by a hospital raid carried out by U.S. forces one week later in Wardak Province. Armed militants destroyed a clinic in Khost Province in May 2009.  These are but just a few examples of the abuse of what should be inviolable medical facilities.

One can argue that the military should not pretend to be a humanitarian agency doling out assistance based on need, rather than on political and military goals; or that civilian development assistance—often carried out with military protection—is based ultimately on strategic nation-building. But no one, least of all Afghans, expects states to actively work against their own strategic interests.

Civil society, though, does have the choice to act independently.

While NGOs mostly claim their assistance is based on humanitarian principles, this is often inaccurate in Afghanistan.  Many NGOs implement nation-building projects at the behest of Afghan and US government agencies, such as USAID. The opposition militant groups challenge the legitimacy of these efforts, since they fall under the broader COIN strategy. In effect, these NGOs are choosing sides in the war. So, despite the presence of hundreds of NGOs in the country, there are few places Afghans can safely go to seek vital assistance.

This doesn’t have to be the case. MSF has been able to carve out operational space in Afghanistan through regular, direct, and transparent negotiations with all the warring parties, and complete financial independence from western- and Afghan-government sources. We also enforce a strict no-weapons policy in our medical facilities. Our independence and purely needs-based approach to providing aid is enabling the possible expansion of operations into other war-wracked parts of the country, such as Kunduz Province in Afghanistan’s troubled north. While other groups lament the lack of “humanitarian space,” we see it opening by maintaining our independence and dedication to helping Afghans, without an agenda.

But confusion remains.  USAID and other western donors often contract out development work to commercial firms, such as Development Alternatives Inc. or International Relief and Development, to implement COIN projects. These companies operate like military outfits, complete with armed and fortified compounds. They are an example not of how soldiers are morphing into aid-workers, but of how so-called aid-workers are morphing into military-like figures.  Media references to these companies as “aid groups” creates confusion.

These companies have made their choices, and can claim neither neutrality nor independence. And NGOs should make the choice now to work independently, in order to provide humanitarian assistance based on needs, and needs alone.

As the conflict intensifies and spreads, the Afghan people must be able to receive essential assistance without having to make the life-threatening choice of taking sides in the war.

-- Michiel Hofman recently completed a two-year assignment in Kabul as country representative for MSF in Afghanistan.