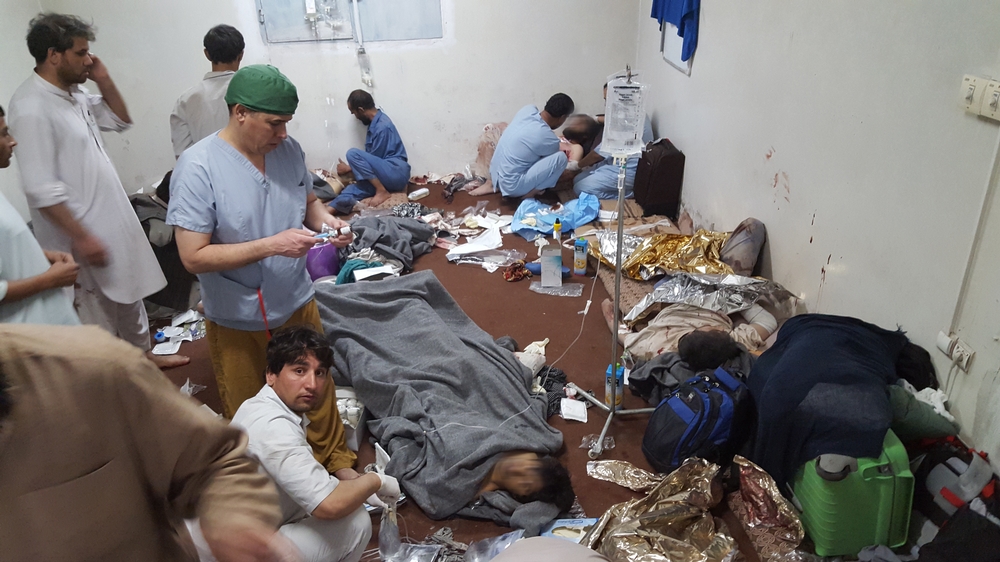 Afghanistan: “Even war has rules”

On Saturday morning, MSF patients and staff killed in Kunduz joined the countless number of people who have been killed around the world in conflict zones and referred to as ‘collateral damage’ or as an ‘inevitable consequence of war’.

International humanitarian law is not about ‘mistakes’. It is about intention, facts and why.

Even war has rules

The US attack on the MSF hospital in Kunduz was the biggest loss of life for our organisation in an airstrike. Tens of thousands of people in Kunduz can no longer receive medical care now when they need it most.

Today we say: enough.  Even war has rules.

In Kunduz our patients burned in their beds. MSF doctors, nurses and other staff were killed as they worked.

Our colleagues had to operate on each other. One of our doctors died on an improvised operating table - an office desk – while his colleagues tried to save his life.

An attack on the Geneva Conventions

This was not just an attack on our hospital – it was an attack on the Geneva Conventions. This cannot be tolerated.

These Conventions govern the rules of war and were established to protect civilians in conflicts – including patients, medical workers and facilities.

They bring some humanity into what is otherwise an inhumane situation.

The Geneva Conventions are not just an abstract legal framework - they are the difference between life and death for medical teams on the frontline.

They are what allow patients to access our health facilities safely and what allows us to provide healthcare without being targeted.

MSF
MSF staff in shock in one of the remaining parts of MSF's hospital in Kunduz, in the aftermath of sustained bombing 03 October 2015.

It is precisely because attacking hospitals in war zones is prohibited that we expected to be protected. And yet, ten patients including 3 children, and 12 MSF staff were killed in the aerial raids.

The facts and circumstances of this attack must be investigated independently and impartially, particularly given the inconsistencies in the US and Afghan accounts of what happened over recent days.

We cannot rely on only internal military investigations by the US, NATO and Afghan forces.

Today we announce that we are seeking an investigation into the Kunduz attack by the International Humanitarian Fact-Finding Commission.

This Commission was established in the Additional Protocols of the Geneva Conventions and is the only permanent body set up specifically to investigate violations of international humanitarian law.

We ask signatory States to activate the Commission to establish the truth and to reassert the protected status of hospitals in conflict.

Though this body has existed since 1991, the Commission has not yet been used. It requires one of the 76 signatory States to sponsor an inquiry.

Governments up to now have been too polite or afraid to set a precedent. The tool exists and it is time it is activated.

We need you to stand with us

It is unacceptable that States hide behind ‘gentlemen’s agreements’ and in doing so create a free for all and an environment of impunity.

It is unacceptable that the bombing of a hospital and the killing of staff and patients can be dismissed as collateral damage or brushed aside as a mistake.

We need you, as members of the public, to stand with us to insist that even wars have rules.