10th March, 2022- Zainab didn’t sleep well last night. The lights and the incessant beeping of the machines in the intensive care unit would keep anyone awake. But mainly she couldn’t sleep because she was worried about her one-year-old son, Takberullah. He also had a restless, irritable night as he was having trouble breathing until the doctor gave him some medication. “Why is my baby’s foot cold?” Zainab asks a medic, clutching Takberullah’s ankle as she pushes a blanket over his chest." 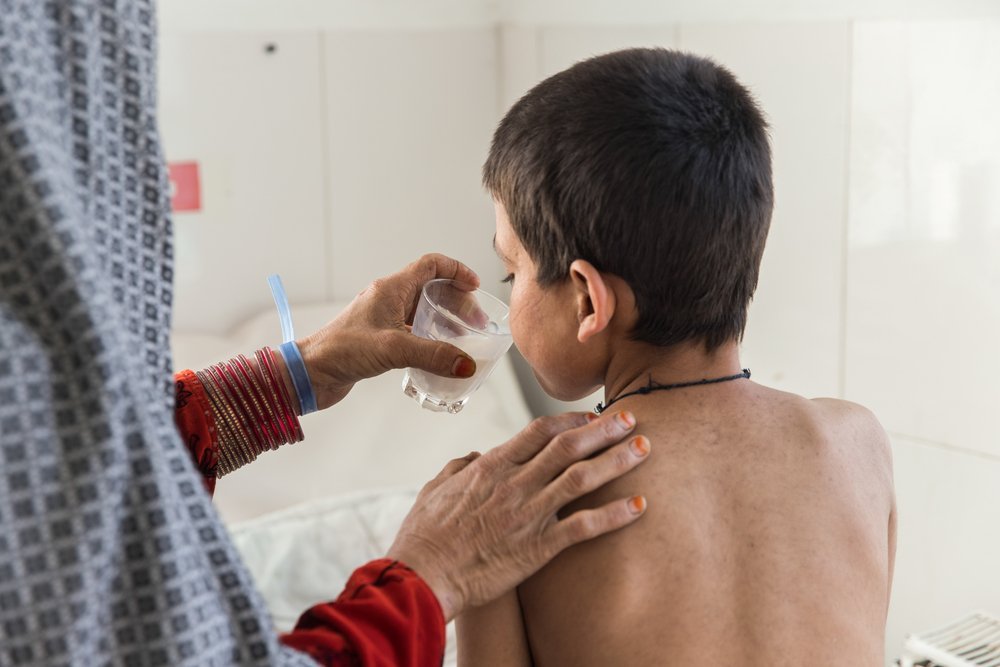 Tom Casey/MSF
Saed Bibi is giving a glass of milk to her son Saddiqulah, 10, in the paediatric department of the MSF supported Boost hospital in Lashkar Gah, Helmand province. (February, 2022).

Takberullah has been in the paediatric intensive care unit of the MSF-supported Boost hospital in Lashkar Gah, Helmand province, for the last three days.

Ten days ago, he and his two sisters developed a fever and diarrhea, but Takberullah became much sicker than his siblings. 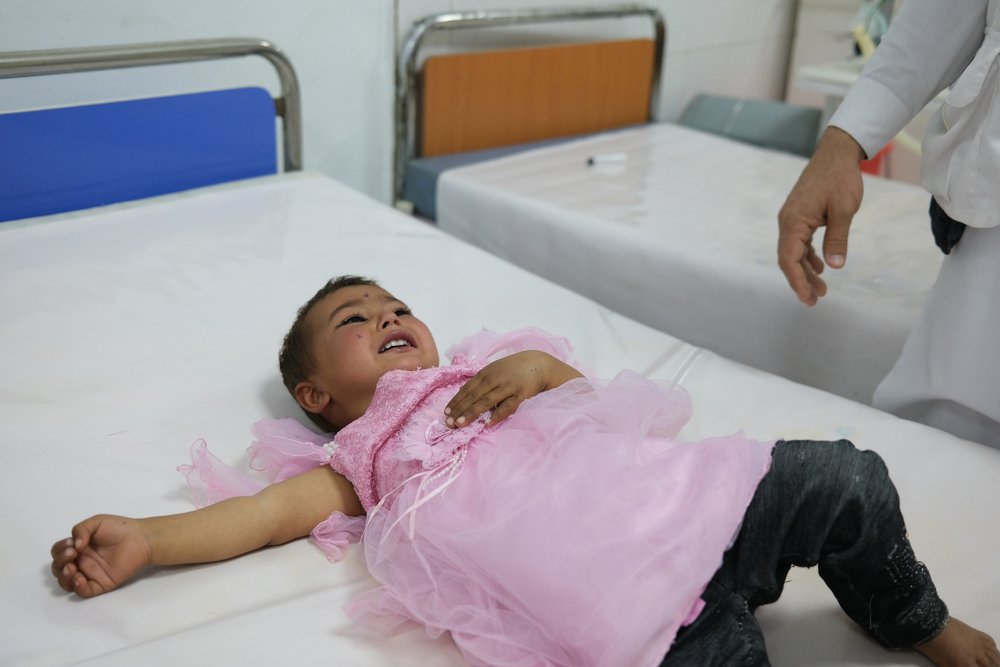 After two days a rash appeared, and his mother brought him to Boost hospital where he was diagnosed with measles.

Now he has severe pneumonia, a life-threatening respiratory infection, and hypoglycemia, meaning his blood sugar is low.

These complications explain his cold hands and feet, and leave him in a critical condition. “How long will he have to be here?” asks Zainab, “I have other children sick at home but I don’t know how they are doing.” 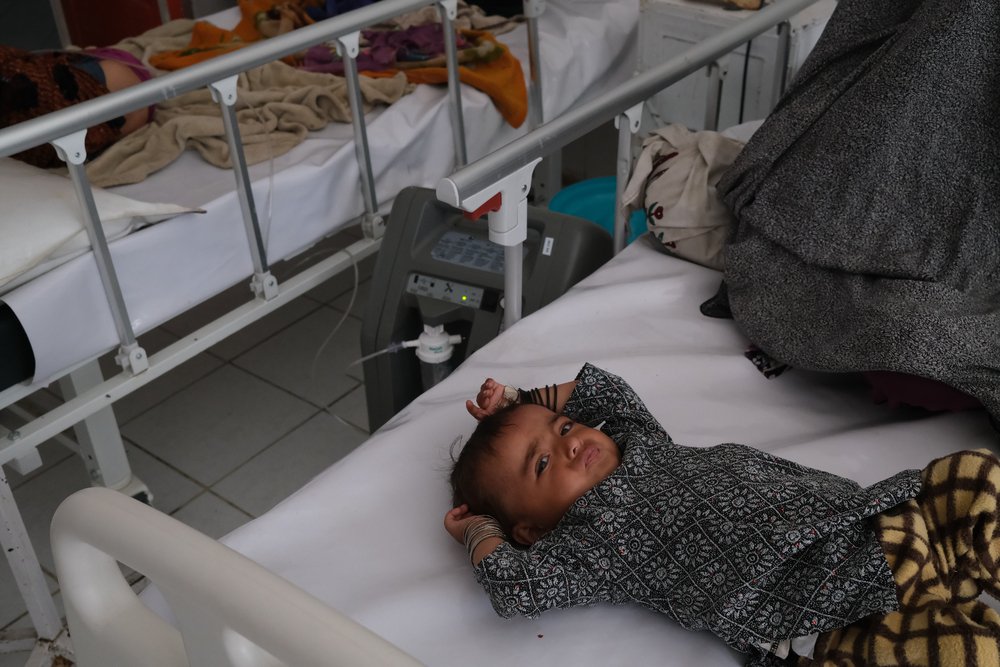 Takberullah is being given oxygen, antibiotics and glucose to fight the complications.

He is one of over 1,400 children with measles that MSF saw in its projects in Helmand and Herat in February.

Half developed a complication that required admission to hospital.

The number of measles cases has been extremely high in Boost hospital. From December to the end of February on average over 150 children with measles came to the hospital each week. 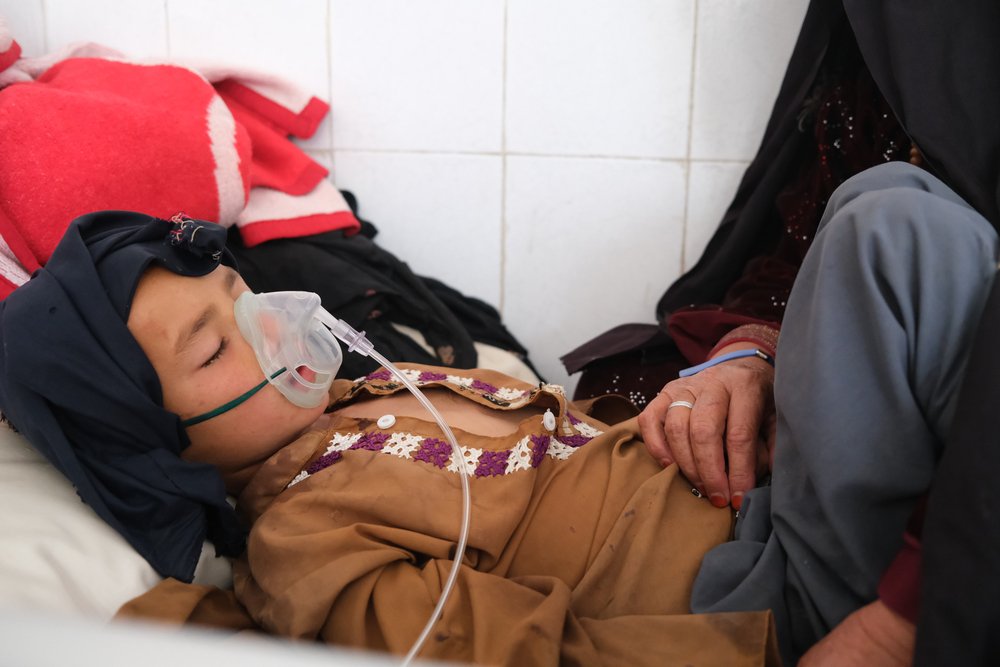 Tom Casey/MSF
A patient in the measles isolation ward at Boost hospital. (February, 2022).

At the beginning of the year, the project had eight isolation beds for patients with infectious diseases like tuberculosis or measles.

Very quickly that ward became overwhelmed with measles patients and so another 12 beds were added.

Now rehabilitation work is ongoing to transform an existing building into a 60-bed measles unit, providing intensive care for critical patients and inpatient care for those who are recovering. 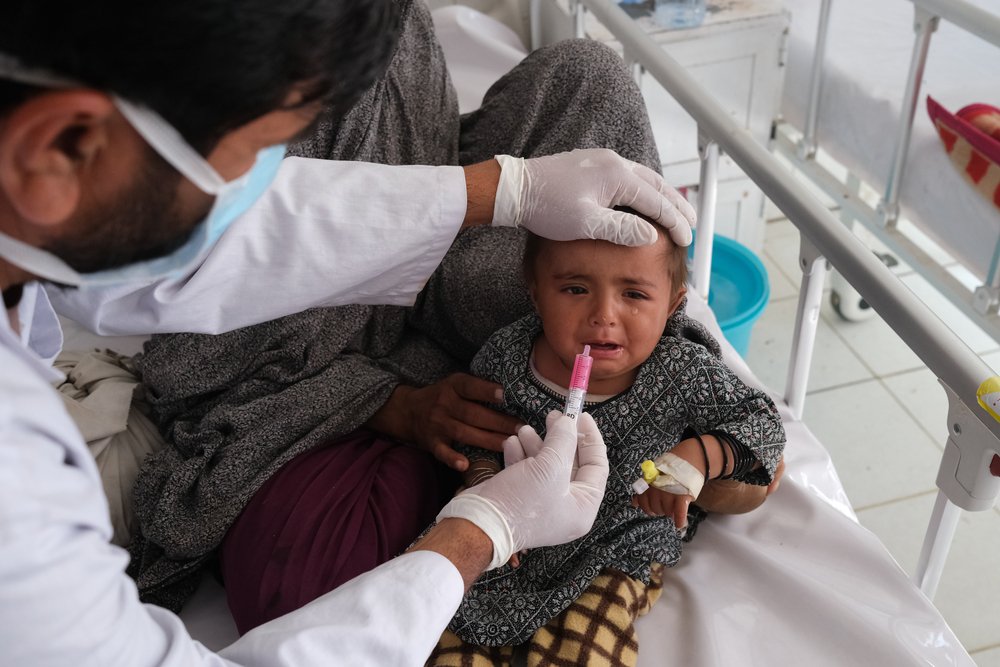 But even this will likely not be enough.

“Sixty per cent of the measles cases we see arriving at Herat Regional Hospital require hospitalisation and half of those we admit for critical care are also malnourished,” says Sarah Vuylsteke, MSF Herat project coordinator.

Measles and malnutrition, a deadly combination

The situation is particularly alarming as Afghanistan is already facing a nutritional crisis. For months, children receiving treatment in MSF’s feeding centres in Helmand and Herat have often had to share beds as the number of patients exceeds the centres’ bed capacity. 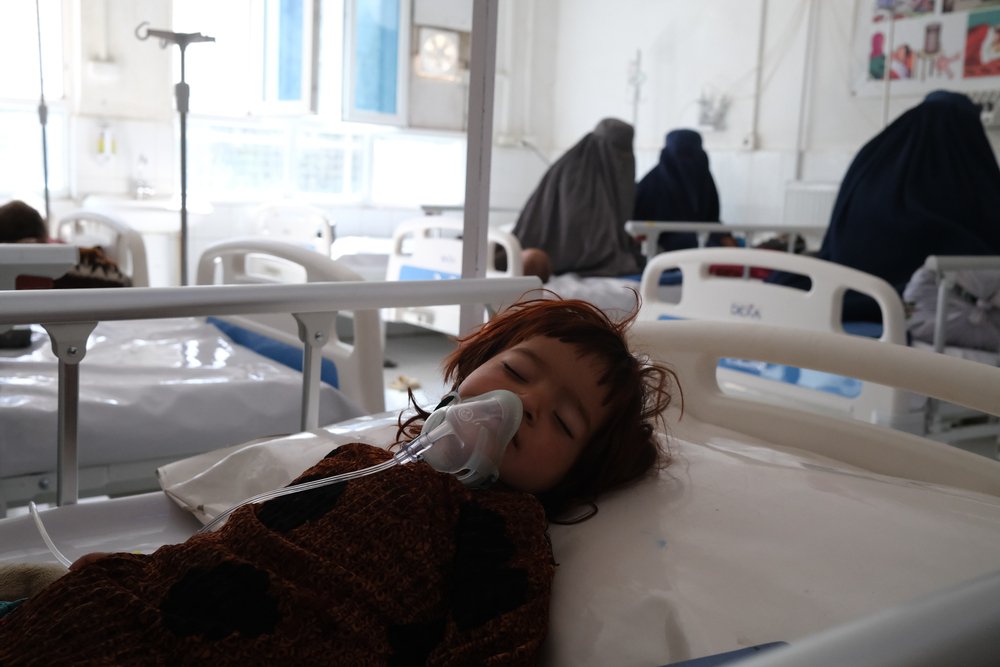 Tom Casey/MSF
A patient in the measles isolation. (February, 2022).

Across both projects from January until the end of February there were almost 800 children admitted with severe acute malnutrition.

“Measles damages children’s immune systems and makes it harder for them to fight complications such as respiratory infections like pneumonia.”

“If a child is malnourished, as many in Afghanistan are at the moment, their immune system is already very weak and that can lead to a more severe and prolonged measles infection." 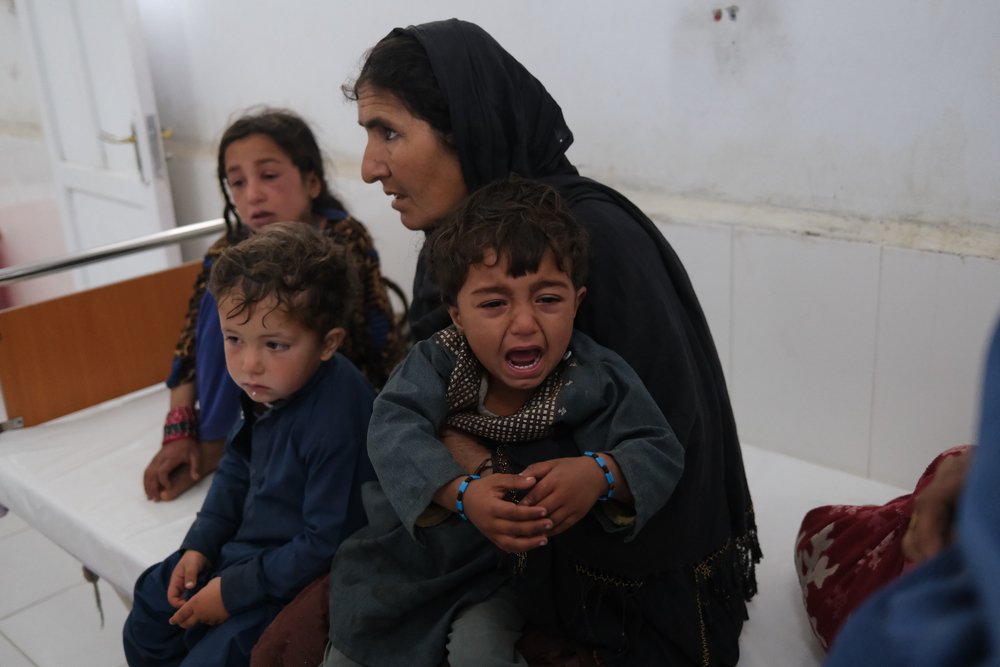 Tom Casey/MSF
Han Bibi with her grandchildren in the measles screening unit at Boost hospital. (January, 2022).

"This in turn damages their immune system even further and makes children very vulnerable. A lot of malnourished children die from post measles complications.”

Measles is preventable through vaccination, but coverage in Afghanistan is low and this is one explanation for the rapid rise in cases. In addition, sometimes several families live under one roof, creating perfect conditions for the rapid spreads of the disease.

Some children recover from measles by themselves whilst others need simple medication for their complications, but even this can be hard to find in Afghanistan as many health facilities lack sufficient medicines and supplies. This means many parents have to buy the medication from local pharmacies. 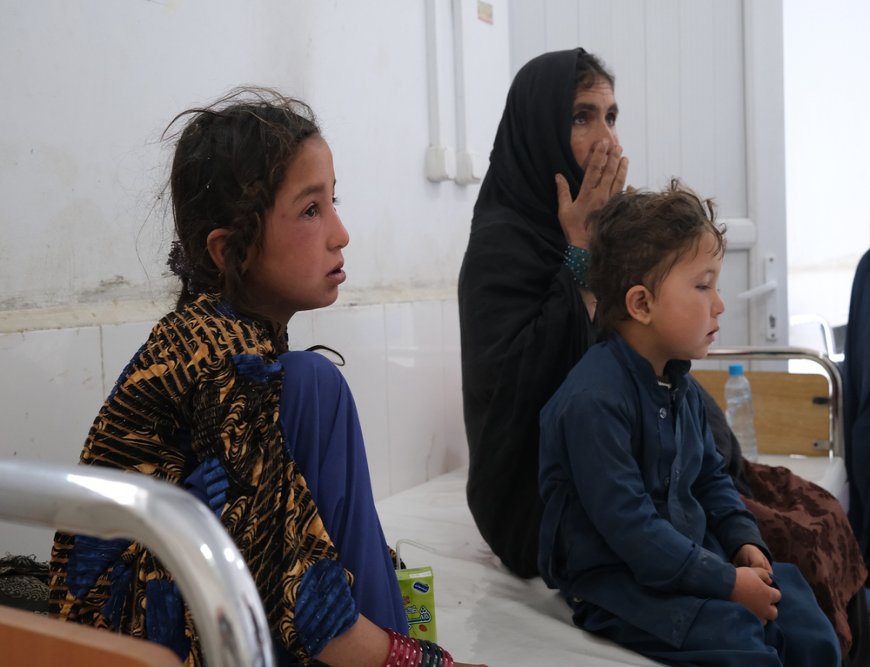 Tom Casey/MSF
Han Bibi with her grandchildren at Boost hospital. She lives with her 12 grandchildren, all of whom caught measles. (February, 2022).

“All 12 of my grandchildren got sick but these three are suffering the most,” explains Han Bibi who is waiting for her son in Boost hospital’s measles screening unit, with her grandchildren around her. They look dazed and unhappy, all three have measles.

“We bought some medicine in our village but when the children didn’t improve we came here. The eldest was crying saying her chest was painful, and she was vomiting. She’s drinking a lot of water but can’t hold anything else down.”

Extra strain on the health system

“In our project in Herat, two children are dying every day due to measles complications and I dread to think about what’s happening in other parts of the country that don’t have access to more advanced care,” says Sarah Vuylsteke, the MSF coordinator in Herat.

“In our project in Herat, two children are dying every day due to measles complications and I dread to think about what’s happening in other parts of the country that don’t have access to more advanced care”

“The public health facilities we visited in rural areas have the capacity to handle measles patients with mild complications, but the staff in every single one said they wouldn’t be able to help severe or complicated cases as they don’t have the supplies, staff or equipment. For children who are very sick, the most vulnerable, there’s very little they can do.” 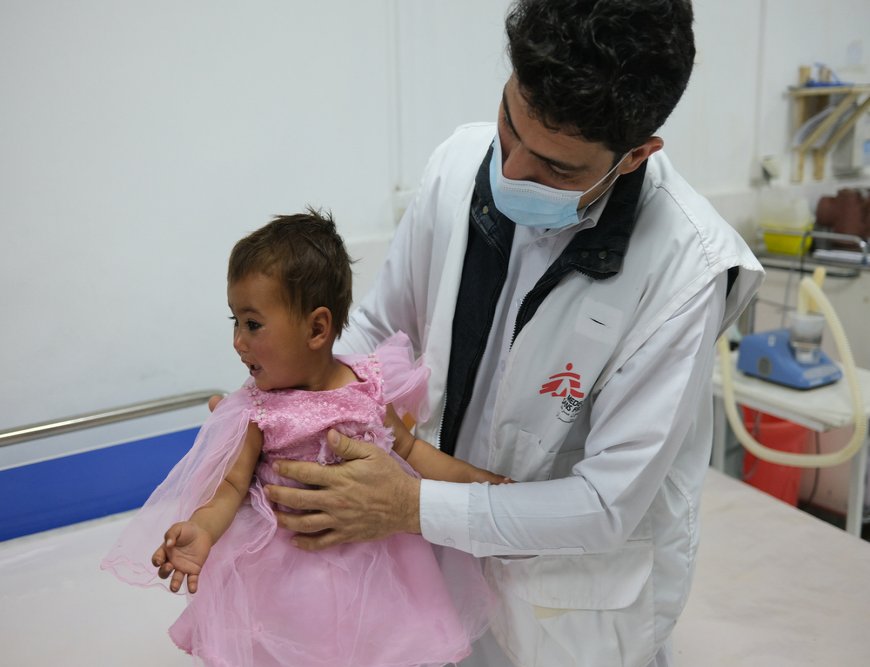 Tom Casey/MSF
Measles weakens children’s immune systems which can lead to other health problems even after the measles goes away. (February, 2022).

“We can increase the number of beds in the places where MSF works but this won’t fix the problem. Unless there’s a widespread vaccination campaign, we will continue to see increasing cases for the next six months, putting yet more pressure on an already fragile healthcare system."

"In the longer term, the programme for regular measles vaccinations should be strengthened so that children can be vaccinated routinely, rather than in response to flare ups in cases.”

In Kunduz city, MSF financed staff and equipment for a new 35-bed measles ward at Kunduz Regional Hospital. The ward opened on 27 February and by the next morning it already had more patients than beds. Back in the paediatric intensive care unit at Boost hospital, medics crowd around what used to be Takberullah’s bed, trying to save the life of a new patient. Meanwhile, Zainab has packed up her things and travels home, alone, to be with her remaining children.