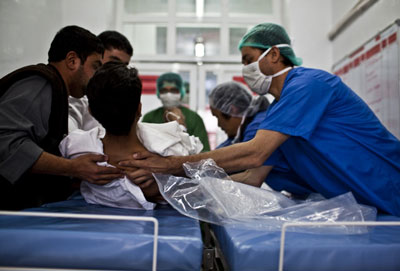 Following violent protests over the reported Quran burnings at Bagram airbase, MSF received 50 patients at its surgical hospital in Kunduz province in northern Afghanistan. Protests have been raging across Afghanistan over the past week since the Quran burnings were first reported. Demonstrations yesterday turned violent in Kunduz as protesters tried to storm the UN compound in the province.

“It all happened very quickly. We saw almost 30 patients over the course of an hour when the violence first started, most of them in critical condition and needing immediate care”, says Silvia Dallatomasina, MSF’s Medical Coordinator in Kunduz.

The MSF surgical hospital received a total of 50 patients, of which 39 were admitted, the majority suffering gunshot wounds. Three patients died, the rest have been stabilised and treated or referred to the regional hospital. MSF surgical teams carried out fourteen operations throughout the day and into the night, including vascular surgery and treatment of fractures from gunshots.

Since August 2011, MSF has been running a surgical hospital in Kunduz providing urgent surgical care and follow-up treatment for people wounded in the conflict, and for those suffering from life-threatening injuries.  Hundreds of people have been treated in the hospital since it opened, which is the only specialised surgical hospital of its kind in northern Afghanistan.

A strict no-weapons policy is implemented in all locations where MSF works in Afghanistan to ensure patient safety and security. MSF teams also work in Ahmed Shah Baba Hospital in Kabul and in Boost Hospital in Lashkar Gah, capital of Helmand Province. As in Kunduz, MSF provides free medical care in both locations, and works in all wards of the hospitals.

MSF plans to open a maternity hospital in Khost Province in early 2012.

MSF relies solely on private donations to carry out its work in Afghanistan, and does not accept any government funding.