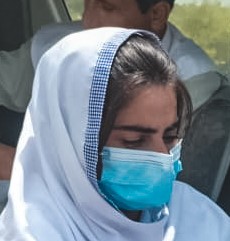 Akeela, an Outreach Counsellor with MSF since 2020, lived in the village of Mir Gul Hassan Manju Shori Barun Naseerabad which is around 5 kilometres from Dera Murad Jamali (DMJ) in Balochistan, one of the areas hardest hit by monsoon rains and extreme flooding that left one third of Pakistan underwater. After losing her home, she is now responding to the emergency on the front line. 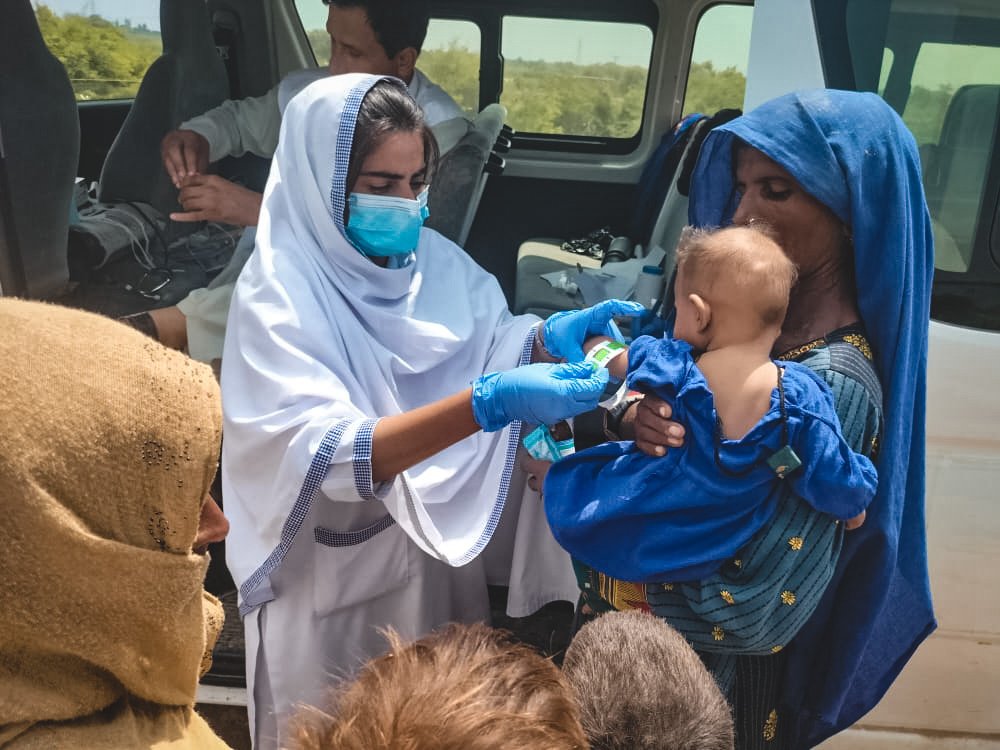 MSF
Akeela, an outreach counsellor with MSF since 2020, lived in the village of Mir Gul Hassan Manju Shori Barun Naseerabad which is around 5 kilometres from Dera Murad Jamali (DMJ) in Balochistan, one of the areas hardest hit by monsoon rains and extreme flooding that left one third of Pakistan underwater. After losing her home, she is now responding to the emergency on the front line. (September, 2022).

“In June and July, we received normal rainfall and daily life was going fine. I used to visit my family on weekends in my village which is 4 to 5 kilometres from Dera Murad Jamali where I work with MSF’s outreach team. We used to visit the communities and help raise awareness about mother and child health and different diseases. It was the month of August and oddly we were receiving more continuous rains than normal years. On the 17th of August, the water started coming towards our village and we were asked to leave immediately.

In the rush, my parents and younger siblings left the village and thankfully we had our uncle’s home in Dera Murad Jamali, so they shifted there, whereas one brother and one sister were left behind to take care of our cattle as my family had a herd of cows and goats. They took the cattle to higher ground but when they saw the flood water start to cover the village, they had to flee. My siblings took shelter and climbed up the rooftop of a nearby house. They watched as the water started to increase, and our cattle, houses, and farm, all washed away. The water came up to 8 or 9 feet high. It was so heartbreaking to see our house and village underwater.

I initially took leave for a week to support my family but when I saw that so many people needed help, and I received a call from MSF requesting support for the emergency response, I couldn’t stop myself from saying ‘yes’. Within two days, I was on duty conducting assessments in flood-affected villages. We reached faraway villages, and found families were living in the open without shelter. I saw some people using two wooden beds (charpai) pushed together with plastic covers as shade on the side of the road because their houses were under water, and they did not have a home or enough food or clean drinking water. Still, the rain continued, on and off.

After the assessments, our emergency teams were formed, and I was part of Team B. The first village we visited was Rabi Pull and Uch power plant camp where we set up a mobile clinic and provided clean drinking water. The water was sourced from MSF’s gravity fed water treatment plant in Dera Murad Jamali, Balochistan. It’s one of the few water treatment plants available in the region. In our mobile clinics, we are seeing patients with respiratory infections, diarrhea cases, malaria cases and skin infections. The people here are drinking and using the flood water, which is contaminated, and it is spreading several diseases.  Our doctors are completing check-ups, providing medications and referring pregnant women and people who require specialist care to an MSF facility in District Headquarters Hospital, Dera Murad Jamali. 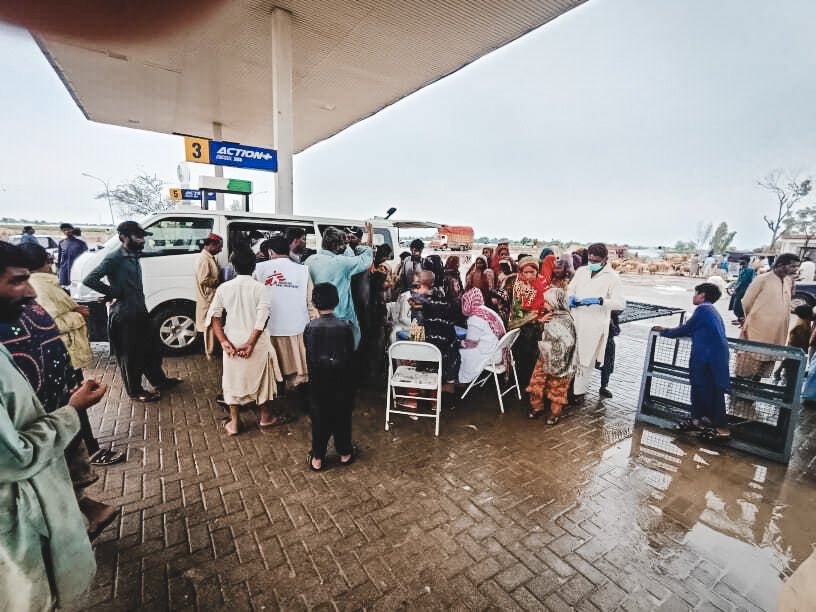 MSF
MSF's emergency teams in Dera Murad Jamali have set up mobile clinics in different locations in the flood-affected villages including Manjhu Shori, Rabi Pull, Uch power plant and others. The medical doctors are completing the checking of the patients. Our team have so far provided consultations to 2,575 patients with respiratory infections, eyes infection, fever, diarrhoea, skin diseases and prenatal care for mothers.

We have also distributed 236 hygiene kits to people near Uch Power plant where internally displaced people are taking shelter. We have so far also provided 70,000 litres of clean drinking water to displaced families and medical consultations to around 2,575 patients at different locations in Naseerabad, Jaffarabad and Dera Murad Jamali, Balochistan province.

During our response, we set up a mobile clinic in my flood-affected village Mir Gul Hassan Manju Shori Barun Naseerabad, also called ‘tanki wala’. As we were moving towards my village, I felt a sense of contentment. The people of my village know my work with MSF well as I also visited them many times during our outreach activities. I was part of MSF’s emergency team providing support to the communities and my community was one of them. All the houses in my village,  including my house, are still in the water and they will take up to a month to completely dry out. 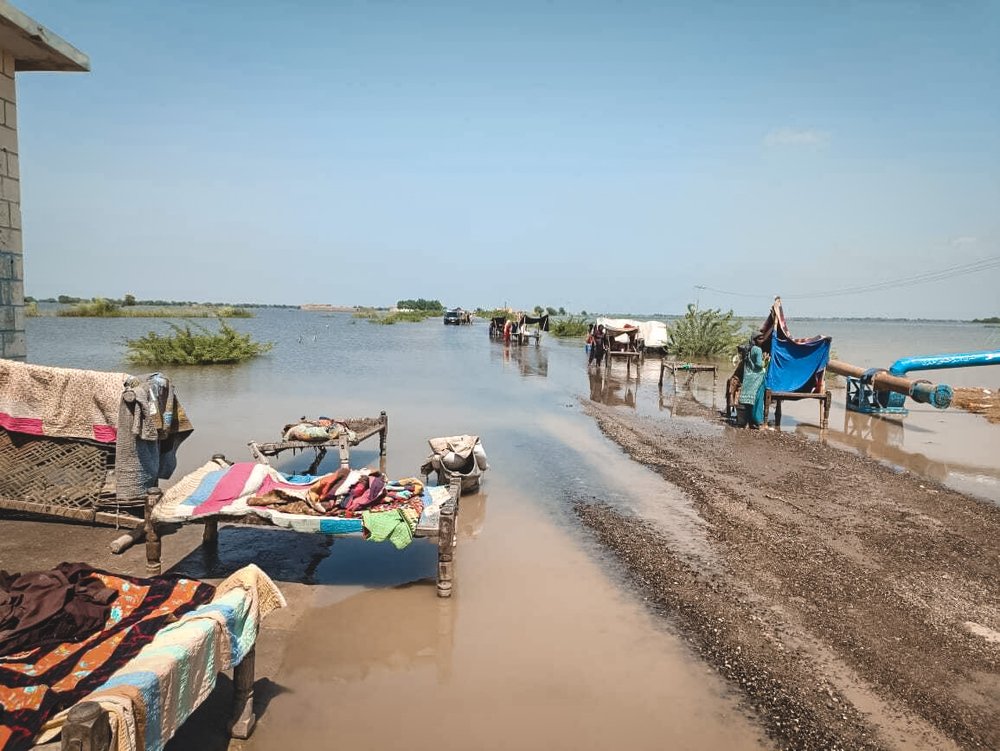 In one of our medical camps, there were some people on one side, a few families on the other side of the flood water and there was a family with three children, all of whom had a high fever. I watched as the parents, on seeing our medical camp, crossed the flood water seeking treatment for their children. But many people in other more remote villages are still waiting for help to arrive.  I can feel their pain as many have left their houses and are living in camps without help. Some of them are also cut off from the cities and access is difficult.

They are a reminder of why we continue our daily mobile clinics and to provide clean drinking water to the displaced families.”