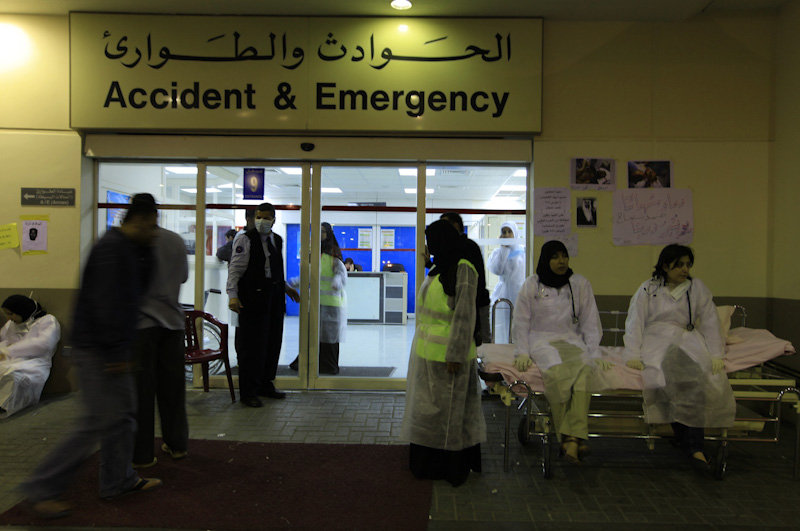 Bahrain: From Hospital to Prison

In the kingdom of Bahrain, to be wounded by security forces has become a reason for arrest and providing healthcare has become grounds for a jail sentence. During the current civil unrest, Bahraini health facilities have consistently been used as a tool in the military crackdown, backed by the Gulf Cooperation Council, against protestors.

The muted response from key allies outside of the region such as the U.S. – which has significant ties to Bahrain, including a vast naval base in the country – can only be interpreted as acceptance of the ongoing military assault on the ability to provide and receive impartial healthcare.

While the government and its supporters in Bahrain continue to refer to the protestors as ‘rioters’, ‘criminals, ‘extremists’, ‘insurgents’ or ‘terrorists’, the label that remains conspicuously absent for those who are wounded is ‘patient’.

Since 7th April, when Médecins Sans Frontières/Doctors without Borders (MSF) first raised the alarm about the situation, our team has seen patients in villages across the country who were severely beaten or tortured in jail; schoolgirls who have been both physically abused and threatened with rape; and patients in urgent need of hospitalisation who still refuse to be referred due to the high risk of their arrest.

The militarisation of the only public hospital, Salmaniya, persists. Although Ministry of Health statistics show an increase in patients accessing the hospital, tanks and security checkpoints are still manned by masked soldiers at its entrances, searching cars and people.

The wounded tell MSF that they are still too afraid to go to the hospital in case of being arrested or beaten in the wards.

Doctors and nurses also continue to be arrested during raids on health facilities, or on their homes at night. In fact, 47 medical staff are now being prosecuted by the Bahraini authorities.

Within Bahrain, the medical community itself is polarised. Many oppose the blatant militarisation of medical assistance, while others support the military presence in the hospital and the legal charges against fellow health workers. However, the impact on the patients is often disregarded.

By dragging the health system deeper into the political crackdown on dissent, Bahraini authorities continue to undermine patient’s trust in health facilities.

All of the 88 people that MSF has managed to see in their homes are at risk of being arrested if they were to present themselves at health facilities – simply for being wounded in protests by government forces. Some of them need to go to hospitals for surgery or x-rays – but MSF is unable to safely refer them.

This is because hospitals in Bahrain have received directives that any patient who presents with wounds associated with the current unrest must be reported to the police by health staff.

While there is a legal provision to report trauma cases to judicial authorities in many countries, this is designed to assist and protect victims of violence. However, in Bahrain today, the reality is that hospitals are being used to catch and imprison wounded people.

Our medical teams then face the impossible choice of knowing that patients who need medical attention risk arrest and a serious deterioration of their health condition in prison.

MSF has seen the results of violence and torture perpetrated against those imprisoned, caused by beatings with iron rods, boots, hoses and cattle prods on the back, legs, buttocks, genitals and soles of the feet.

MSF has also seen the serious impact of psychological abuse on those arrested, including extreme anxiety and fear as a result of sexual harassment and humiliation.

Ensuring the safe and impartial provision of treatment for the wounded is a basic legal obligation under humanitarian law. It is entailed in mandatory provisions of Common Article 3 to the 1949 Geneva Conventions – and is valid at all times.

Thus, as a state party to these Conventions, the Bahraini authorities must respect its obligations regarding the protection and provision of health care to the sick, injured and prisoners.

This healthcare should be provided by the high quality Bahraini health system, without precluding the offer of medical services by an impartial humanitarian organisation such as MSF.

Although we now have authorisation to begin training Bahraini health workers to deal with psychological trauma, other crucial assistance remains blocked.

Our requests to set up a referral system, whereby MSF can accompany wounded patients to health facilities to ensure they receive lifesaving care, are still met with insufficient guarantees about their safety.

The national security agenda of Bahraini authorities must not come at the expense of the lives and health of wounded people, whether in hospital or prison. Doctors and nurses must be allowed to provide healthcare in line with medical ethics, without the fear of reprisal.

This is impossible when health facilities are used as bait for arrest and torture, with the support of Bahrain’s closest allies.