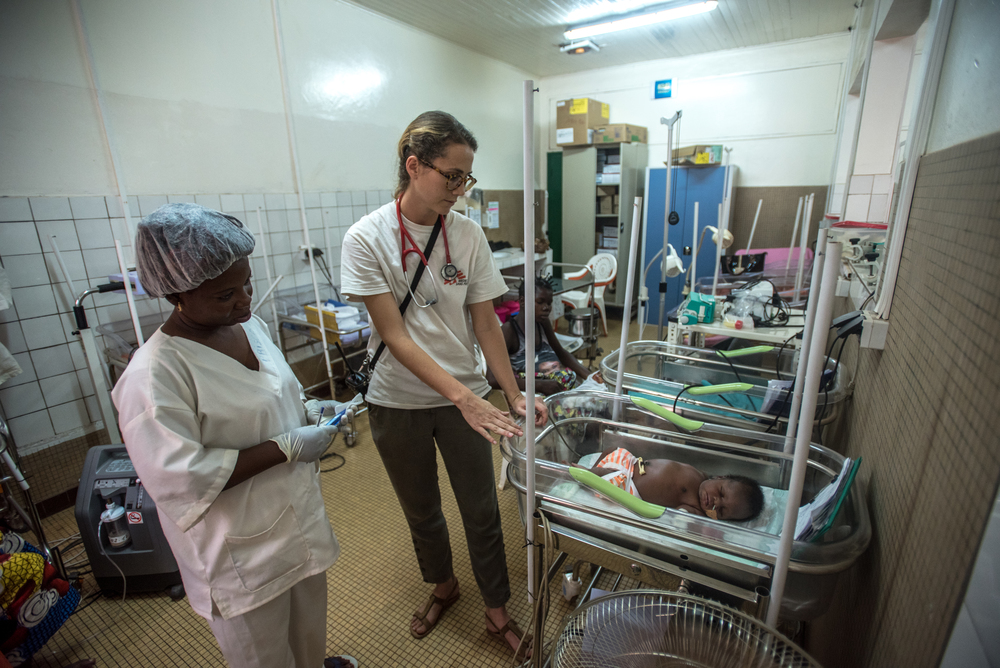 On November 21st 2017,  following a violent armed robbery that threatened the lives of its workers, Médecins Sans Frontières (MSF) evacuated all of its 58 national and international staff from Bangassou, a town in the southeastern area of Central African Republic (CAR) that is largely under control of various armed groups affiliated to the  Anti-Balaka factions.

"Leaving the population utterly abandoned is a painful admission that we are unable to bring humanitarian relief to one of the most severe humanitarian crises in the world today because of attacks on our staff.”
Frederic Lai Manantsoa  ​MSF’s country director​

In the Bangassou region, half a million people were relying almost entirely on MSF services to access healthcare. “We had the will and the means to stay in those areas. But we cannot put the lives of our staff on the line when the medical structures where we work and our staff are threatened”, says Frederic Lai Manantsoa, MSF’s country director.

Following attacks, most health centres in the area not supported by the organization were left empty, lacking staff and the most basic drugs and medical supplies.

“Today, the 30 children under five who were in intensive care in the Bangassou hospital will not be seen by doctors or nurses. The 26 patients in urgent need of surgery will be left in their beds.

MSF has been working in CAR since 1997 and remains operational in 10 locations across the country. The organization continues to bring medical relief to people living behind the rapidly evolving frontlines that divide the country, including Bria, Bambari, Alindao, Batangafo, Kabo, Bossangoa, Boguila, Paoua, Carnot and Bangui.

The war in the Central African Republic (CAR) has had devastating effects on the population, with 538,000 refugees and 600,000 internally displaced people (IDPs) out of a population of approximately 4.5 million. The United Nations Office for the Coordination of Humanitarian Affairs (OCHA) estimates that 2.4 million people (over half of the population) are in need of humanitarian aid.

In 2016 MSF provided one million medical consultations, vaccinated 500,000 children for various diseases, performed 9,000 surgeries and assisted 21,000 births in the country. Since the beginning of the year, however, as the armed conflict intensified in the country, the organization had to transform 4 out of its 16 medical projects (including Bangassou and Zemio) that previously provided health care for the general population into emergency relief for people directly or indirectly affected by conflict.

Below is a list of attacks and threats made against MSF staff or structures supported by the organisation in the Central African Republic over the past 14 months.

Patient assaulted during his transfer in an MSF vehicle in Bangui. To protest against this unacceptable aggression, MSF suspended its activities in the entire neighbourhood from 4 to 7 October.

The leader of an armed group who had brought his wife to Batangafo hospital threatened the emergency and maternity staff so she was given priority and treated according to his instructions. The team worked for an hour while being threatened by the man.

Two armed robberies in the living quarters of international staff in Bambari. MSF suspended its activities for a few days and then continued operating with reduced activities for two months.

Armed robbery in the living quarters of international staff in Zemio. Reduction of activities (vital emergencies only) for three weeks.

Burglary at a health centre supported by MSF in the Batangafo region.

Three wounded arrived one after the other at Gbaya Ndombia Maternity Clinic (Bangui) following a grenade explosion. A crowd quickly gathered in front of the maternity clinic, men threatened the guards and forced their way inside the structure using weapons to retrieve one of the wounded and attack another patient. The latter managed to lock himself in and stay safe. The armed men then blocked the ambulance’s path in front of the maternity clinic for more an hour. No one was harmed and no damage was reported.

Second armed intrusion at Gbaya Ndombia Maternity Clinic, while the medical team was managing an influx of 21 wounded, including three dead. During this intrusion, invaders terrorised MSF staff and tried to kill one of the wounded under their care. MSF suspended its activities in PK5 neighbourhood of Bangui for several weeks in protest.

Threats against MSF staff following their refusal to refer a patient for treatment abroad. As a consequence, movement of MSF staff on rural roads was reduced for around two months in Kabo.

Armed robbery of two MSF trucks along the road between Batangafo and Kaga-Bandoro carried out by two men armed with AK47s and traditional weapons.

A drunk armed man came to Batangafo hospital for a consultation. He refused to wait his turn and slapped the consultation manager twice.

Assault and armed robbery of an MSF convoy on the road between Kaga Bandoro and Dekoa road: shots fired on the lead vehicle.

Two armed men opened fire at Zemio hospital, killing a baby in its mother’s arms. MSF withdrew its expat and relocated staff, and continued to manage the project from Bangui.

Robbery of two MSF vehicles on the Moyenne-Sido road.

Violence in Batangafo, robbery of MSF’s base and looting of other NGOs.

MSF’s base in Zemio was looted and vandalised.

In Batangafo, armed groups surrounded and regularly came into the hospital, blocking access for people coming to receive treatment or simply visiting patients. On 10 and 11 August, shots were fired near the hospital, endangering patients, health staff and civilians who had sought refuge in the hospital. MSF reduced its activities in Batangafo.

Attack on Zemio hospital. The people there fled and MSF’s stocks were looted.

An MSF ambulance referring a patient to Bangassou hospital for specialised care was stopped by armed men, who refused to let it continue its journey for over three hours. MSF suspended its activities in Bangassou.

Civilians seeking refuge at Batangafo hospital were shot at: a 15-year-old and a child died and two other people were wounded.

“Turbulent” search and control of our patients at Bangui airport during their medical transfer, and direct threats made against our staff.

An MSF guard was beaten after he attempted to stop a quarrel between displaced people who had found refuge at Batangafo hospital.

An MSF car was stopped by armed men in Bangassou, and the staff were threatened.

Threats against MSF staff after they refused to refer a patient for treatment abroad. Reduced movement of MSF cars and people on the roads for three weeks around Kabo.

A casual worker hired by MSF was beaten by armed men in front of the health centre where he was going to work.

Bangui: a member of staff accompanying a patient referred from the countryside was assaulted at the hospital where he was by the parents of the wounded who arrived following a grenade explosion at a dancing bar of the 5th arrondissement.

Armed robbery against the team at Zemio. The expat and relocated team were evacuated.

Armed robbery at MSF’s Bangassou base. The entire team, including international and Central African staff, was evacuated. Activities suspended.