Bangladesh: "We were not able to climb the fence and the fire was approaching"

The huge blaze in Cox’s Bazar camps trapped many refugees between the flames and the fences surrounding the area. This tragic incident just worsens even further the living conditions for thousands who have lost everything.

“We were a group of around ten women, many with children. Everyone screaming and crying. We were not able to climb the fence and the fire was approaching. We tried to use a hole under a toilet next to the fence, but only small children could go through. I had the idea to put my sandals in my hands so I could force the wires apart and we could finally escape,” explains Fatima*, one of the refugees that had to run away from the blaze that engulfed thousands of shelters at a refugee camp in Cox’s Bazar, Bangladesh, on 22nd March.

Fatima- "As it was coming closer, I got scared"

As the fire approached, many found themselves trapped between the flames and the fence surrounding most of the camps. “Men could climb, some tried to help their female relatives, but it was very difficult for most of us, and in addition our clothes were snagging in the barbed wire,” she explains. 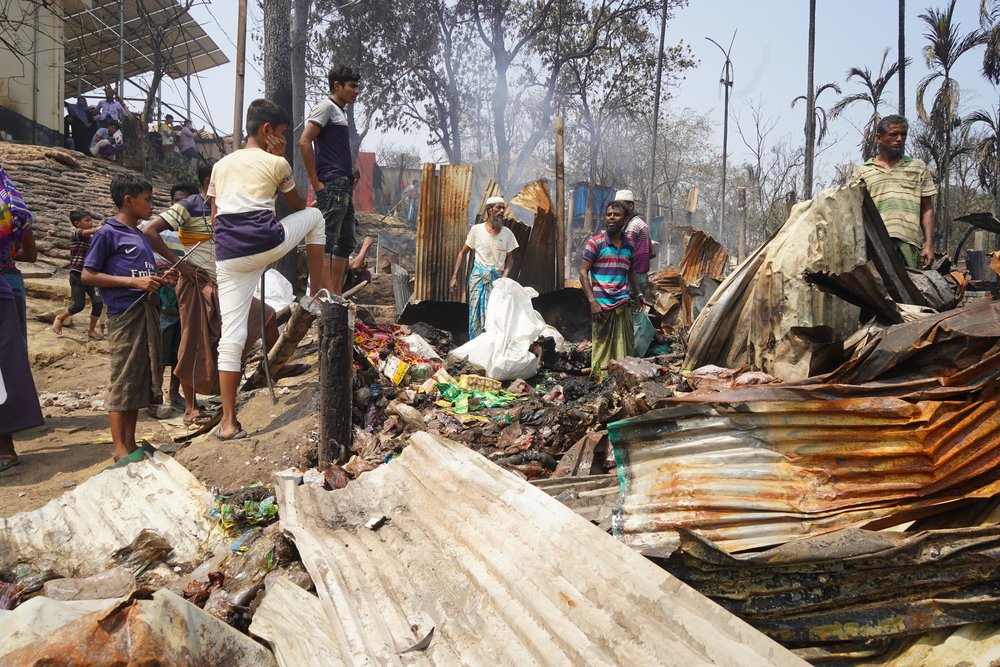 Pau Miranda
The morning after the fire destroyed thousands of shelters and facilities, people like these men were trying to save what was left of their belongings.

After crossing, some had lost part of their clothes: they felt terribly ashamed as some men were looking at them.

Fatima is one of the Rohingya volunteers in the Balukhali clinic, that was completely destroyed by the fire. 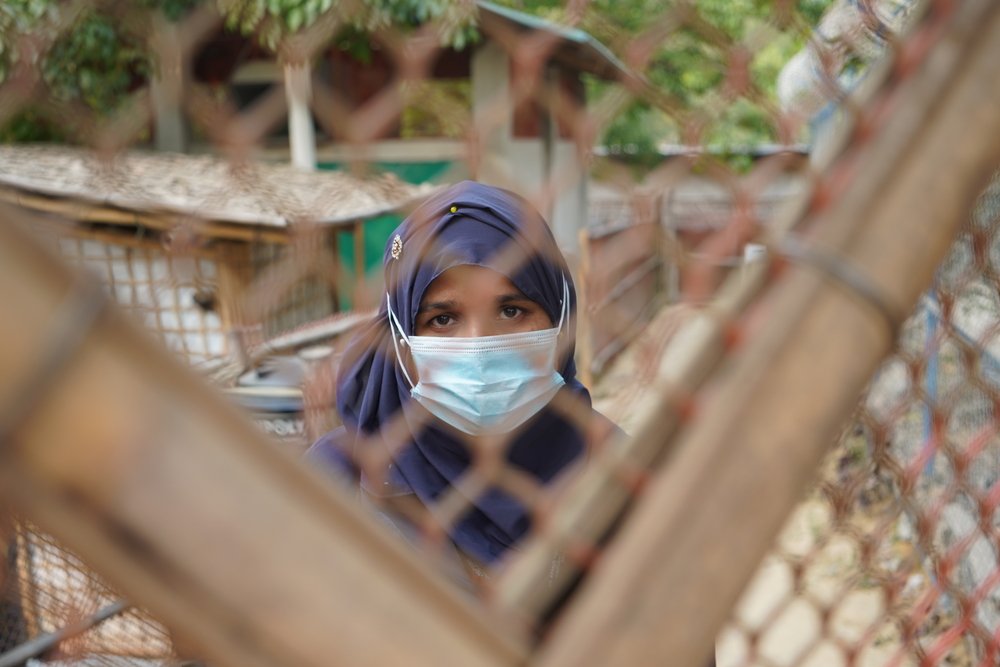 Pau Miranda
When the fire started Fatima (not her real name) got caught along with other women between the flames and the fence barbwire, which she could only cross by putting her shoes on her hands to force the wires apart.

“I was in the clinic, around 2:30 in the afternoon when we first realised there was fire, but it was still far. As it was coming closer, I got scared and we finally left the clinic after we heard an explosion. I could hear many children crying and calling their mothers”.

“I went to look for some relatives living in camp 9 [one of the most affected by the fire] and I saw their house burning. Fire was really close and I jumped into a pool of drain water to escape”.

Begum- "Each one of us ran in different directions"

Fatima’s sister-in-law, Begum*, was home with her sister and her 7 years old grandson when the fire started. “At first it was far, we were not too afraid, but as it got closer we got very scared and each one of us ran in different directions”. 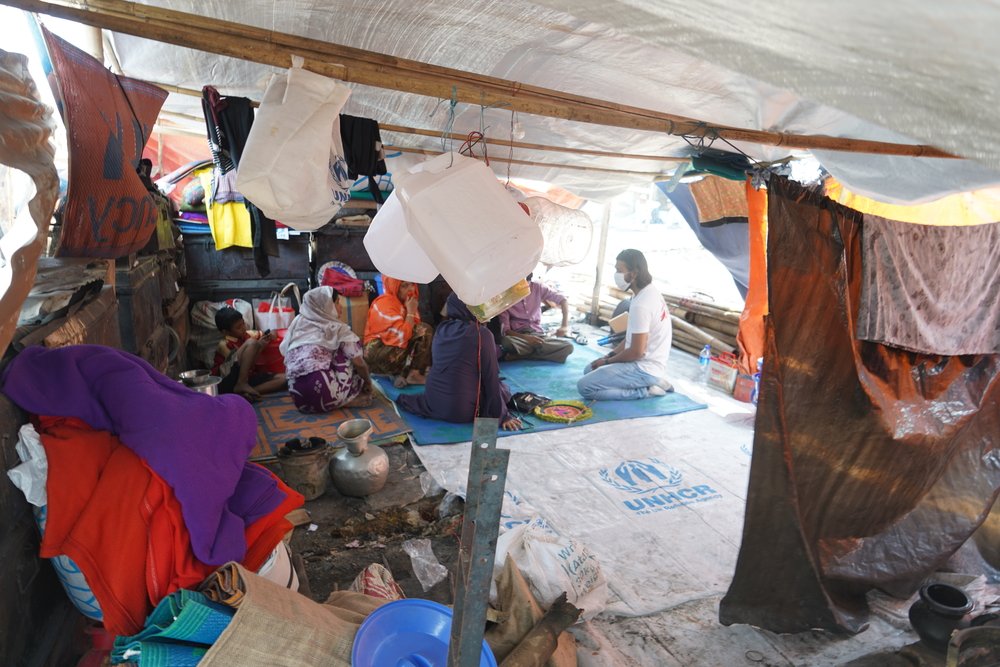 Pau Miranda
Like many other refugees, Begum’ family saw their shelter totally destroyed by the fire that engulfed several areas in the Cox’s Bazar refugee camps on 22nd March 2021.

She managed to cross the fence sneaking under the barbwire but got slight wounds in her ankle. Begum finally met 5 hours later with her relatives in the bazar.

Their shelter had totally disappeared. 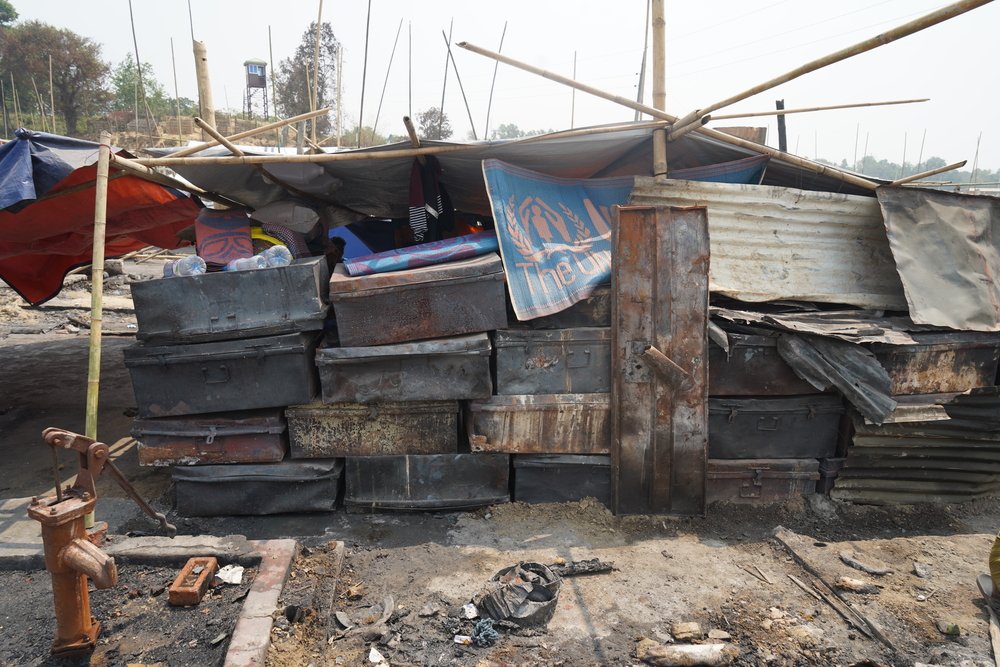 Pau Miranda
Like many other refugees, this family saw their shelter totally destroyed by the fire that engulfed several areas in the Cox’s Bazar refugee camps on 22nd March 2021.

The aftermath of the fire

In the last weeks there had been at least two other minor fires in the camps but this spread through a big extension in different camps. According to UN estimates, 11 people died and flames burnt around 10,000 shelters (hosting 45,000 people).

Many health facilities were also destroyed, including MSF’s Balukhali clinic, covering a population of over 30,000 people and offering a wide range of services. MSF teams assisted a dozen patients with burns or injuries, some caused by the fences.

The Balukhali team will resume some healthcare services this week.

“Now we have just received a few bamboo poles, some plastic sheeting and buckets. We hope we will get something else so we can rebuild our shelter,” Begum says showing in her eyes she is still shocked by the experience. 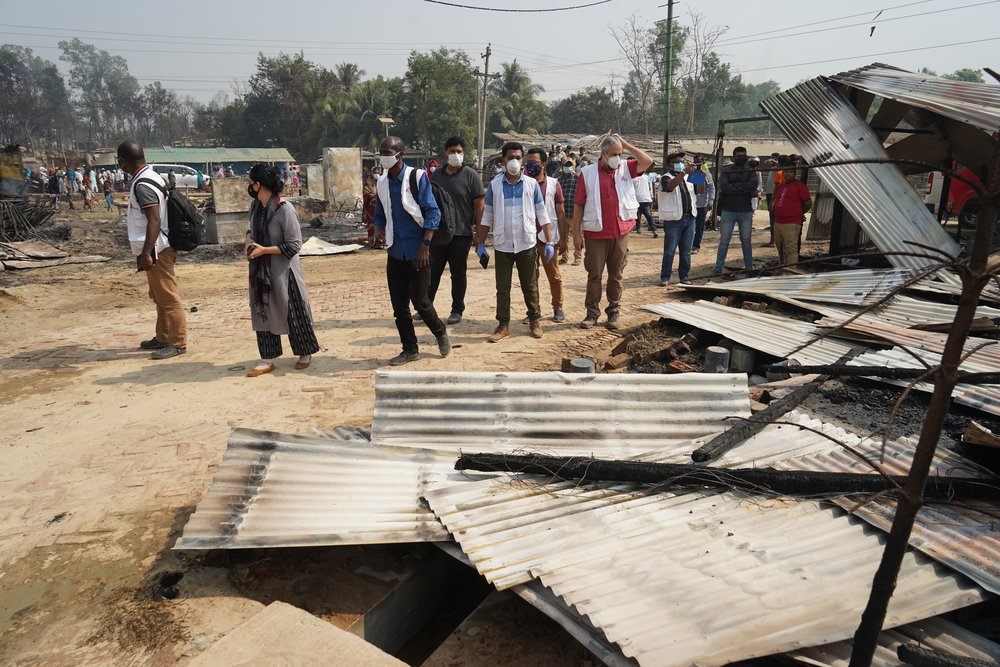 Pau Miranda
Members of MSF’s coordination team visiting the Balukhali clinic the morning after it was destroyed by the blaze that hit several areas in the Rohingya refugee camps in Cox’s Bazar.

Some of her neighbours are also slowly returning to where their shelter were. They cannot leave them empty for too long or strangers may occupy them. Many refugees are staying with relatives in other parts of the camp.

UN agencies and camp authorities haves started distributing “shelter kits” (some bamboo, tarpaulin and plastic sheets) so those who lost their shelters can construct new temporary ones. 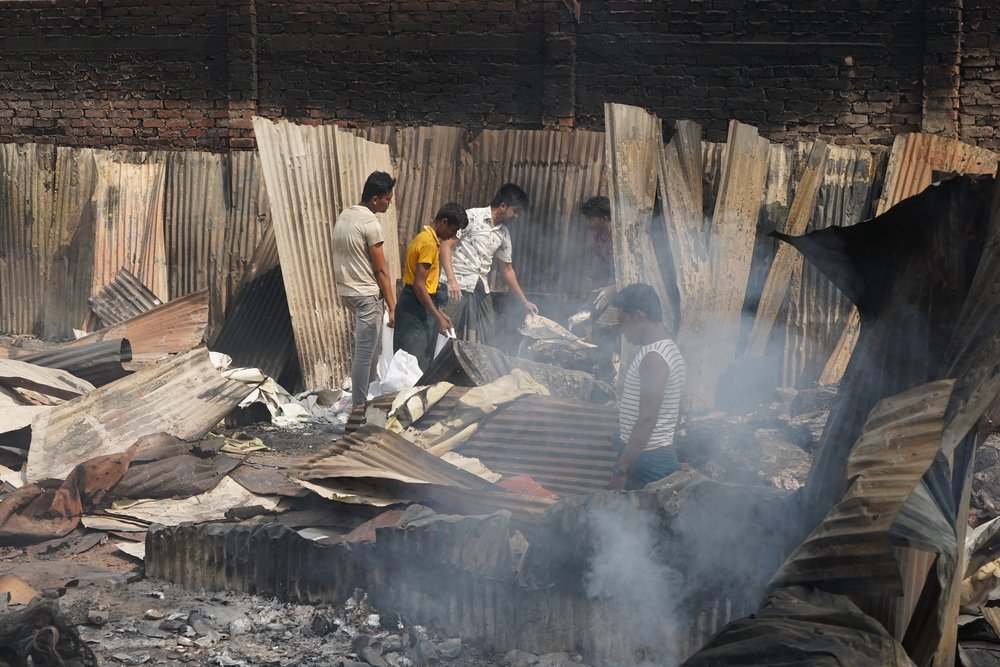 Pau Miranda
The morning after the fire destroyed thousands of shelters and facilities, people like these men next to MSF’s Balukhali clinic were trying to save what was left of their belongings.

Some have been allocated tents or have started properly rebuilding the makeshift houses, but others cannot afford the 1,000 taka (around ten USD) that a bamboo poles pack costs.

“The living conditions in the camps have been steadily worsening for more than a year, and this fire and the loss of thousands of shelters shows just how vulnerable the refugee situation is,” says Natalia Torrent, MSF’s country representative in Bangladesh. 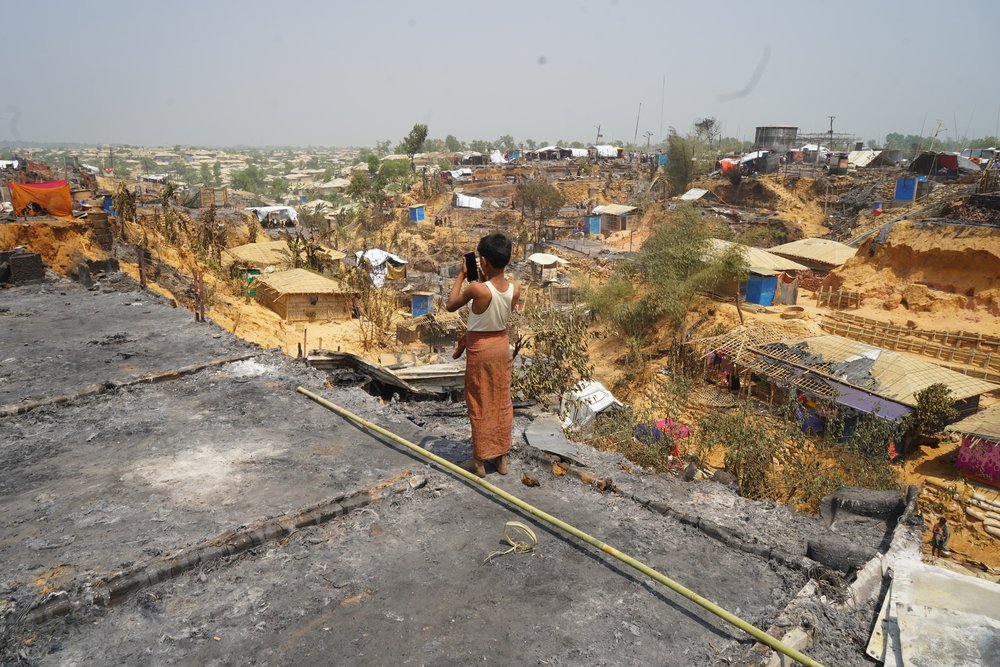 “These makeshift shelters are a temporary solution, but they do not allow a life in dignity or safety. It is important that Bangladesh authorities and UN agencies responsible for management of the camps provide more adequate and humane living conditions to the refugees,” she adds.

Syed- "Fire was chasing us"

Another refugee, Syed*, also saw his family’s shelter totally destroyed. They are eight living there and now they are scattered in relatives’ places.

“We were lucky because near our home the fence was being repaired and that specific day there was no barbwire so we could easily exit the cap”, he says. “Now it is closed again.” 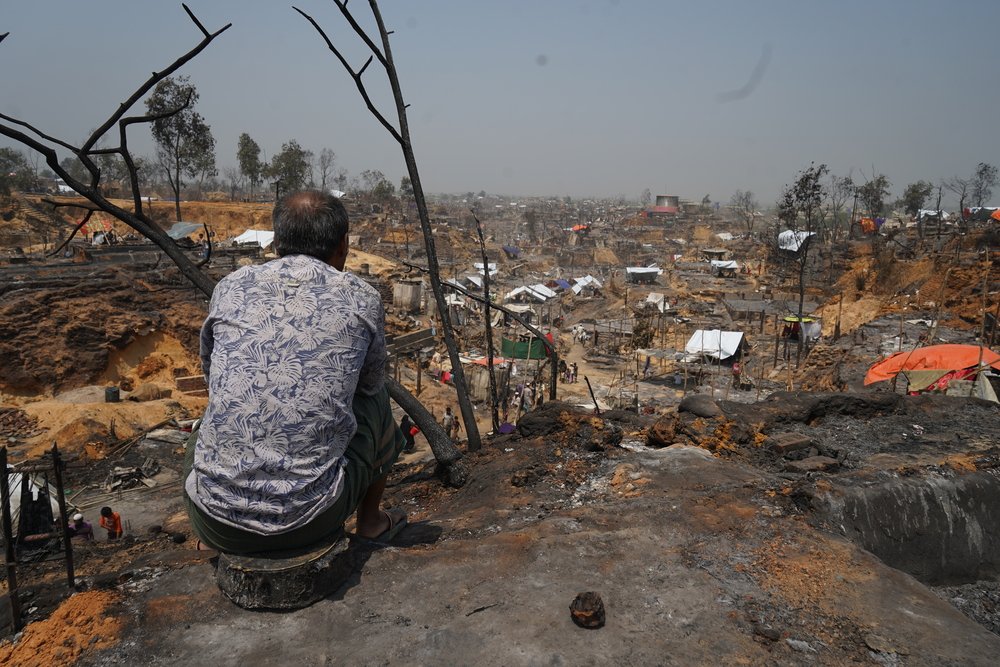 Syed explains why this blaze caused very intense stress for refugees, beyond what many would feel.

“This fire brought me back the anguish we felt when we had to run away from our hometown. Fire was chasing us there and it was the same here”. 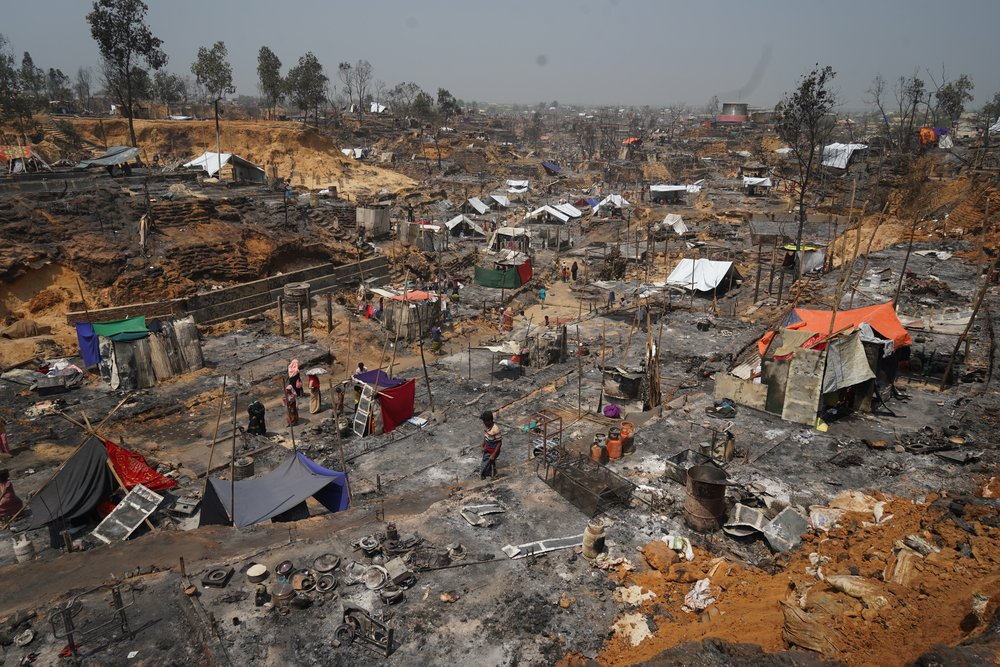 *Names have been changed to preserve anonymity