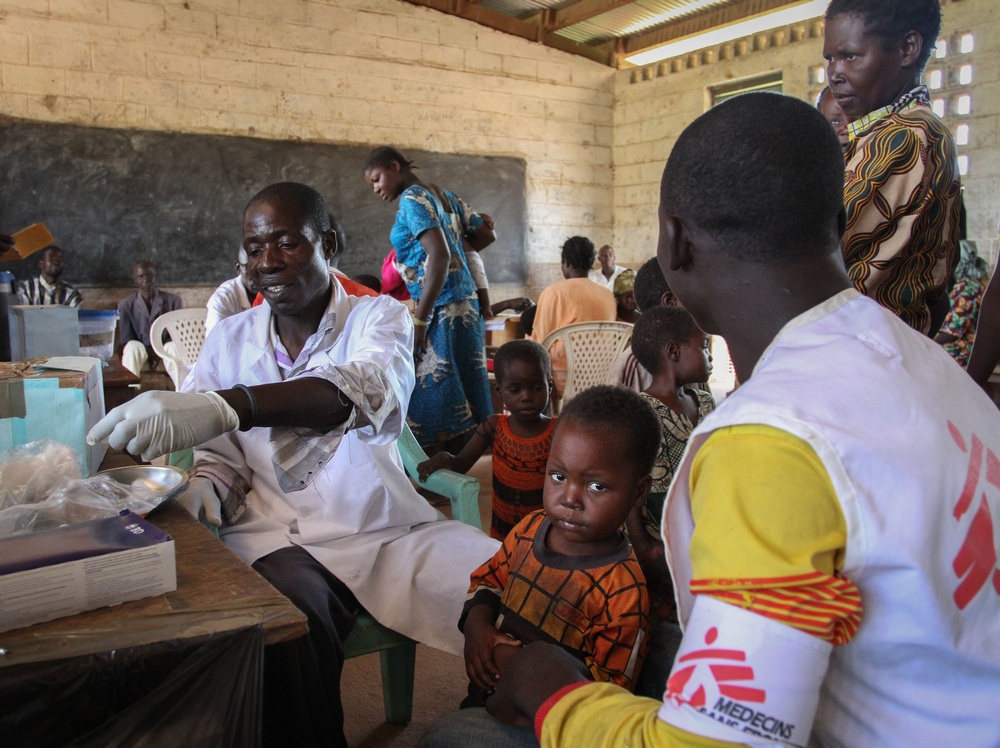 Initiated last July in cooperation with the Ministry of Health in the north of the country, the campaign has now moved to sub-préfecture Berberati in southwest CAR and will gradually be extended to all 13 sub-prefectures where MSF runs medical programmes.

In addition to this large-scale vaccination campaign, MSF is to enhance and scale-up vaccination services in the health facilities where it works.

These two strategies will enable the organisation to provide under five-year olds not yet fully immunised with up to nine antigens: Diphtheria, tetanus, whooping cough, polio, haemophilus influenzae type B, hepatitis B, pneumococcus, yellow fever and measles.

Furthermore, preventive measures such as distributions of Vitamin A, bed nets and anti-parasite treatment and malnutrition screening will be implemented according to each sub-prefecture’s specific needs.

Official Ministry of Health figures show that the political and military crisis that began in 2013 is the cause of the collapse in immunisation coverage rates.

Between 2012 and 2014, the number of Central African children vaccinated against measles fell from 64% to 25% and against acute respiratory infections from 52% to 20%.

“This preventive vaccination campaign is the biggest ever undertaken by MSF in CAR and one of the first aimed at protecting under five-year olds against so many diseases,” explains MSF vaccination advisor Dr Pauline Lechevalier.

“Given the situation in CAR right now, the risk of epidemics and therefore deaths from vaccine-preventable diseases is extremely high. It is vital that as many children as possible be provided protection against these illnesses.”

As part of its campaign, MSF is administering pneumococcal conjugate vaccine (PCV), which, because of its prohibitive cost, humanitarian aid agencies have not yet been able to use on a large-scale.

“For the time being we are benefiting from a donation made by pharmaceutical laboratory Pfizer, one of the two manufacturers of PCV. Without it, we would have to spend several million dollars just to purchase the vaccine,” continues Lechevalier.

Since December 2013, MSF has doubled its medical relief operations in order to respond to the continuing crisis in CAR.

Operating in CAR since 1996, MSF now has over 300 international and more than 2,000 Central African staff deployed in the country.

The organisation currently runs 15 programmes, some of which provide assistance to Central African refugees in neighbouring countries Chad, Cameroon and Democratic Republic of Congo.

In April 2015, MSF launched its global 'A Fair Shot' campaign calling on the two manufacturers of the PCV vaccine (laboratories GlaxoSmithKline (GSK) and Pfizer) to disclose the price charged in all countries.

MSF also called on these companies to reduce the cost to 5 dollars per child (i.e. €4.50 for all three doses) in developing economies.

This was followed by the launch of a petition in November.