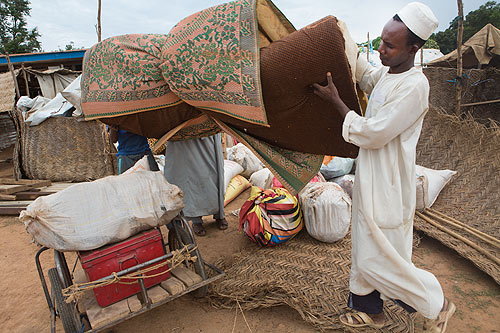 Nearly 7,000 people fled to the bush after fighting erupted in Boguila on the night of April 11th. The remaining people stayed overnight at the hospital where MSF works.

On Friday April 11th fighting erupted between international armed forces and local armed groups after a convoy accompanied by MISCA*  transited through the town of Boguila in northern CAR.  The MSF team working in Boguila hospital heard a large explosion and sustained gunfire, and then saw people fleeing the town.

“We witnessed the majority of the population fleeing in panic to the bush. We opened our compound to some 30 to 40 women and children who stayed overnight with us,” testifies Stefano Argenziano, MSF Head of Mission in CAR.

The international forces were escorting a convoy of around 20 trucks, evacuating the last remaining 540 Muslims of Bossangoa in northern CAR to Gore in southern Chad.

MSF teams received three wounded in Boguila and Paoua hospitals following the clashes which erupted on Friday and continued on Saturday the 12th of April. “We are worried  that the gun battle may have resulted in more people being injured,” added Argenziano.

Since the coup d’état in March 2013, Boguila has been unstable with increasing tensions and violence. In August 2013, a peak of violence already provoked a massive population displacement in the area. In December 2013, Muslims fleeing violence from Nana Bakassa sought refuge with host families in Boguila before moving further north.

“The recurrent clashes between armed groups force people to flee into the bush on a regular basis thus exacerbating their vulnerability and reducing their access to medical care.

With the approaching rainy season the displaced will be particularly exposed to malaria which remains the first causes of mortality in the country,” said Argenziano.

Since 2006, MSF manages a 115 bed hospital  in Boguila, dispensing primary and secondary health care for an estimated population of 45,000 inhabitants in the region.

The MSF teams also support 10 health posts around Boguila in the provision of primary healthcare, mainly treating malaria and referring the severe cases to the hospital. Each month, between 9,000 and 13,000 general consultations are provided and between 5,000 to 10,000 people are treated for malaria.

MSF has been working in CAR since 1997. Currently MSF has more than 300 international staff and more than 2,000 Central African staff working in the country. MSF is running seven regular projects (in Batangafo, Carnot, Kabo, Ndélé, Paoua, Bria and Zémio) and eight emergency projects (in Bangui, Berbérati, Bouar, Boguila, Bossangoa, Bangassou and Bocaranga as well as mobile clinics in the northwest of the country).