The security and humanitarian situation is deteriorating rapidly in Central African Republic, according to reports by MSF teams, as clashes escalate between coalition armed groups and government forces supported by foreign troops, in violence linked to the electoral process.

After numerous offensives in recent weeks across the country, fighting took place on the outskirts of the capital, Bangui, on 13 January. MSF teams in Bangui treated 12 people for violence-related injuries. 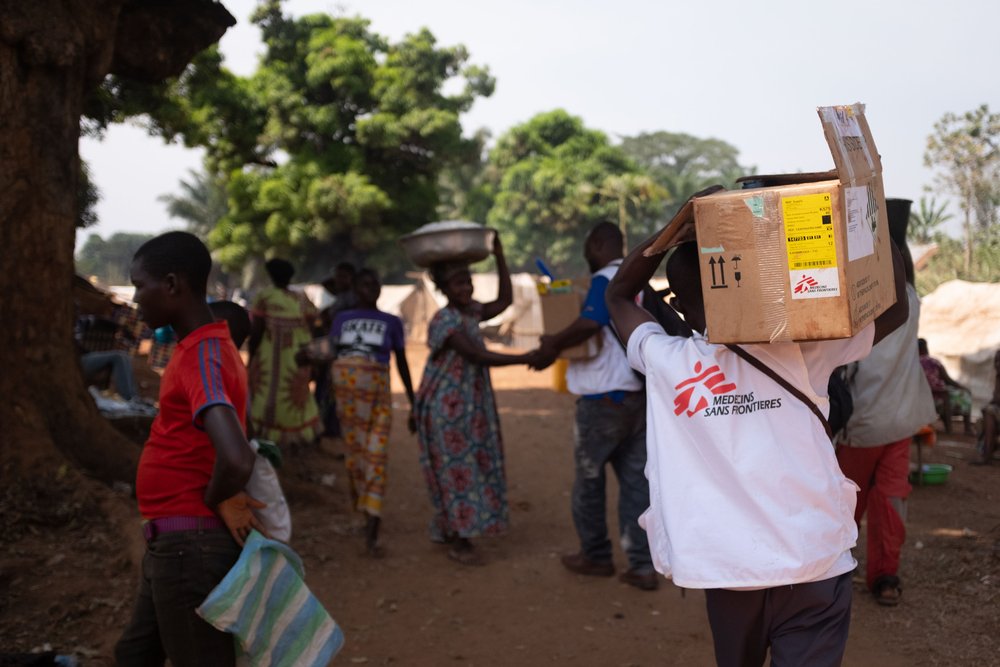 Beyond the direct victims of the current violence, people across the country find themselves with reduced access to essential medical services as a result of the growing insecurity. 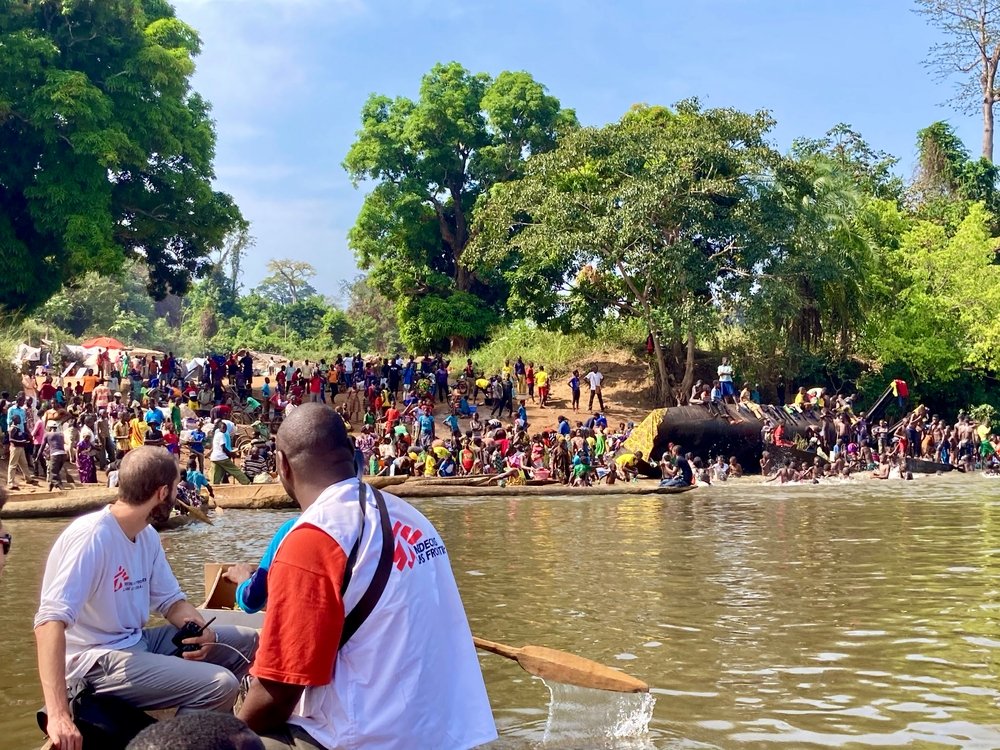 Dale Koninckx/MSF
MSF staff are crossing the Mbomou river to reach Ndu, in DRC, where thousands of people from the Central African Republic sought refuge.

Responding to needs of displaced people and refugees

Tens of thousands of people have been displaced from their homes by the latest cycle of violence, which started one month ago. Many are living in very precarious conditions, both within Central African Republic and in neighbouring countries.

The number of medical consultations has exploded, with more than 110 patients seen each day

In the southeast of the country, more than 10,000 people fled Bangassou during an offensive on the city on 3 January and crossed the Mbomou River to find refuge in the village of Ndu, Democratic Republic of Congo.

MSF teams, who have been supporting mother and child healthcare in the local health centre in Ndu since 2017, have been responding to the needs of the displaced people. 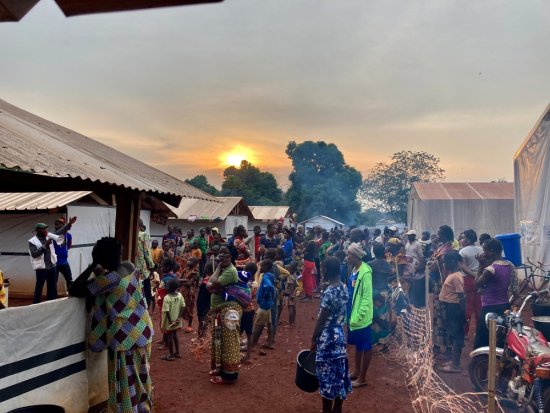 Dale Koninckx/MSF
Families seeking refuge inside the MSF-supported Bangassou University Regional Hospital after the armed offensive on the city on January 3rd, 2021.

“With the massive influx of refugees in Ndu, we immediately increased our support to the health centre by bringing in extra medicines, vaccines and additional staff,” says MSF project coordinator Marco Doneda.

“The number of medical consultations has exploded, with more than 110 patients seen each day, on average, mainly women and children suffering from for malaria, diarrhoea and respiratory infections".

"In view of the needs, we will continue to increase our medical capacity in the health centre in the coming days, as well as our capacity to respond to potential epidemics by reinforcing routine vaccination.” 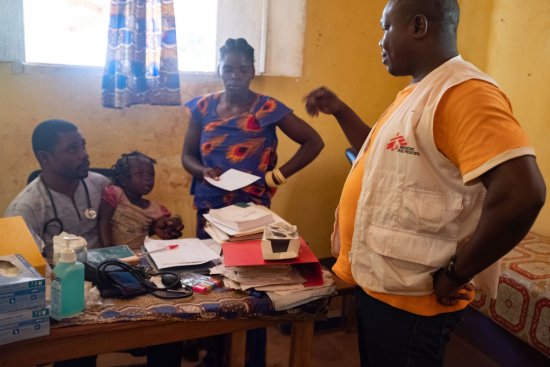 Marco Doneda/MSF
A medical consultation is ongoing in the MSF-supported Bondeko Health Center of Ndu, northern DRC, where thousands of people from the CAR sought refuge.

As well as providing the refugees with medical care, MSF teams have installed a water purification system which supplies three bladders with river water treated to make it safe for drinking.

“Access to water is crucial to prevent the spread of waterborne diseases,” says Doneda. “Living conditions in Ndu are very poor, with very little access to sanitation.”

On the Central African side of the Mbomou River, MSF teams are continuing their medical activities at Bangassou regional hospital, supported by MSF since 2014.

People are still scared and nearly 1,600 people are spending the night in the hospital as we speak

On 3 January, the day of the offensive, nearly 800 people – most of them women and children – sought refuge within the hospital grounds, where MSF teams provided them with shelter, clean water and medical care.

“Although the security situation has calmed down relatively in Bangassou, people are still scared and nearly 1,600 people are spending the night in the hospital as we speak,” says Doneda.

“Besides the hospital, other sites for displaced people have sprung up near Bangassou. As some non-governmental organisations are providing support, we are now assessing the need for us to support people there as well.” 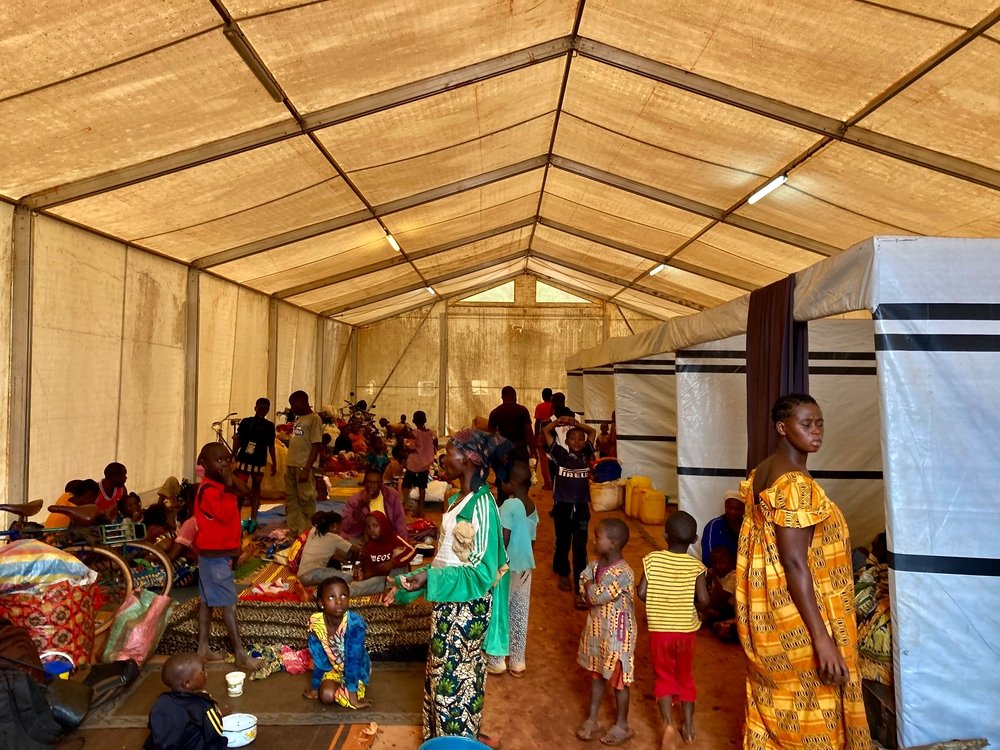 Dale Koninckx/MSF
Families seeking refuge inside the MSF-supported Bangassou University Regional Hospital after the armed offensive on the city on January 3rd, 2021.

For the past four weeks, MSF teams across the country have been treating the wounded and responding to people’s health needs as a result of this new outbreak of violence.

In a country already hard-hit by eight years of civil war, where people live in a situation of chronic medical crisis, the current insecurity is further exacerbating their vulnerability.