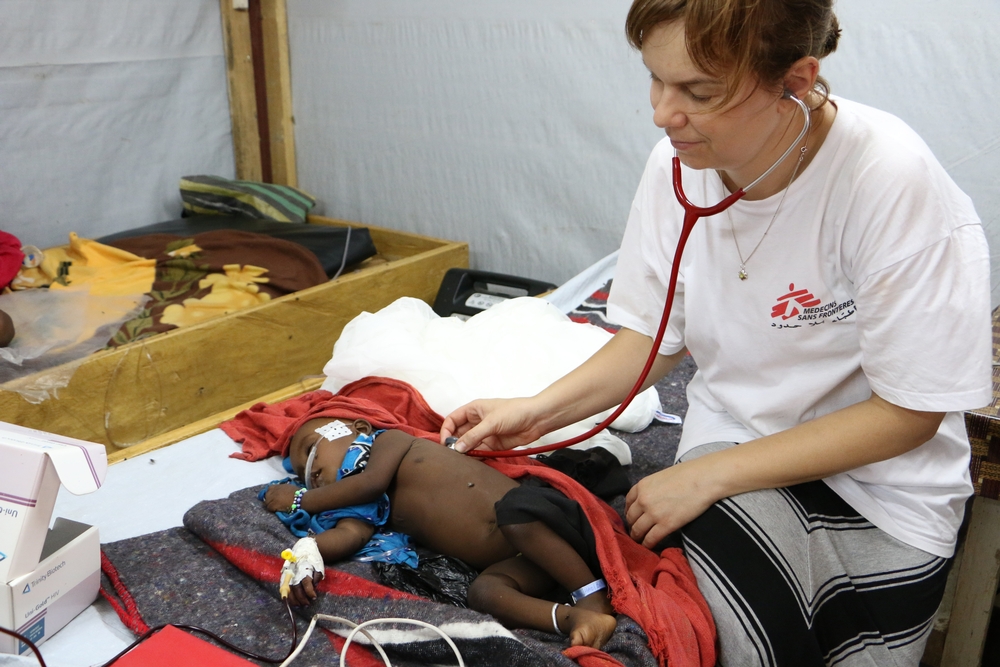 Malnutrition is a recurrent and devastating emergency affecting hundreds of thousands of children in Chad every year.

“Some mums don’t have the means to be able to feed their children. Others do, but they fail to take proper care of them due to a lack of education about hygiene and nutrition. You need to be strong and brave to care for a child here. It’s not easy.”

Bernadette, who has worked with MSF since 2012, is one of more than 200 staff working to tackle malnutrition in the region. Malnutrition is endemic in Bokoro, as it is across much of Chad, with almost half of child deaths in the country associated with the condition.

Charlotte Morris
Bernadette Ammaji, 37, works as a cook at the MSF intensive care unit in Bokoro town. She prepares food for the mums and ill children.

Bokoro region lies around 300 kilometres east of Chad’s capital, N’djamena, towards the centre of this landlocked central African country.

It’s a relatively stable part of the country, but is also neglected and usually out of the headlines due to Boko Haram’s creeping presence in the northwest of Chad. This year, in villages across the Bokoro region and in partnership with the Ministry of Health (MoH), MSF is running 15 mobile outpatient clinics for malnourished children aged between six months and five years old.

In Bokoro town, MSF has an Inpatient Therapeutic Feeding Centre in an MoH Hospital with an intensive care unit where the sickest children are referred. For the first time, MSF is also working in the area to identify and try to prevent children at risk of malnutrition from falling ill.

Charlotte Morris
Mariam Ahian is 35 years old and from Gama. It's the first time she's been to the MSF mobile malnutrition clinic. Malnutrition is endemic in Bokoro, as it is across many other areas of Chad. Almost half of child deaths in the country are associated with the condition

Bokoro’s climate is harsh. It reaches 45 degrees Celsius and has a very short rainy season. “Living conditions are really hard here,” says Suzanne Moher, 36, a Spanish epidemiologist with MSF in Bokoro. “Yes, it’s green now, but when I arrived here a couple of months ago there was no sign of life.”

The population has just a couple of months to grow and harvest enough crops, usually millet, to last them the year. The vast majority of people in the area are subsistence farmers, so a bad harvest can be devastating.

At the moment, hundreds of women bring their babies to MSF’s mobile outpatient clinics every day, as the number of children with malnutrition reaches its annual peak. Families haven’t yet collected this year’s harvest, but last year the harvest was bad and some people have run out of food. Last month, MSF transferred an average of 50 babies every week from the outpatient clinics to its  intensive care unit in Bokoro for emergency care.

Charlotte Morris
The MSF mobile malnutrition clinic in the centre of Gama. Here MSF teams weigh babies and children, measure their upper arm circumference, check they have an appetite and also give a measles vaccination or medication for malaria if necessary

Babies and young children in Bokoro also fall into malnutrition due to cultural practices that can unintentionally cause more harm than good. “Some mums here say that when their next child is conceived, their breastmilk is not good for their existing child,” says Benedicte La-Toumbayle, 28, a Chadian nurse at MSF’s therapeutic feeding centre in Bokoro town.

“They think that by continuing to feed their baby breastmilk, they will harm the future child in their womb.” Mothers often prefer to take their sick child to a religious leader rather than a health clinic.

In the best cases, this can delay malnourished babies getting the treatment they need and in the worst cases vulnerable babies, whose immune systems have been weakened by a lack of food, can die from poison or infection.

It doesn’t help that making the journey to public health clinics in Chad can be  expensive , the clinics often don’t have the necessary medicines or enough trained staff, and despite a national free care policy for malnourished children there are often other hidden costs that make it impossible for people in this area to afford this essential care.

“Sadly a child died today,” says Benedicte. “At home they had given him something to eat as part of a traditional medicine procedure which had poisoned him. When the child arrived here at the clinic we did everything we could. It’s miserable to see so many children suffering in front of you, but it’s also this that motivates me to keep going and to help them.”

Charlotte Morris
Benedicte Latoumbayle, 28, is a nurse from Bokoro. She works at the MSF intensive care unit for malnourished children in Bokoro. She’s been working with MSF in Chad for the last three years

A lack of education

Compounding these risk factors is a widespread lack of understanding across Bokoro about nutrition. “Instead of breastmilk, mums sometimes feed their babies goat’s milk or ‘bouille’ [a type of broth often made from millet], or other ‘adult’ food like this, and then the child gets diarrhoea and falls into malnutrition,” says Benedicte.

Education rates are low with a national literacy rate of just 33 per cent and most of the mothers MSF sees here haven’t spent a day at school. Many don’t understand what it is that’s making their children ill.

A short lesson on hygiene and nutrition is a core part of each mother’s visit to either MSF’s outpatient clinic or intensive care unit.

Charlotte Morris
Mothers from the village of Abourda and surrounding area, who have young children at risk of malnutrition, receive a short education lesson from MSF staff at the distribution site. They’re taught about the importance of washing their hands and what types of food make a nutritious meal for themselves and their young children

MSF has launched an emergency response to malnutrition in Bokoro at this time of year four times in the last five years. Over that time,  it has become clearer that these aren’t one-off emergencies, but part of a pattern of recurring malnutrition with complex, interconnected causes.

As a result, this year MSF started work in Bokoro before the malnutrition cases peaked at the start of the rainy season (May to October), setting up its outpatient clinics in January instead of July. Since then, MSF has treated more than 9,140 babies and children for severe malnutrition. This year, MSF has also set up a component to the project that works to prevent babies and young children from getting malnourished in the first place.

“The children who come to our distribution sites should be healthy, but are at risk of getting malnourished,” says Elizair Djamba, supervisor of MSF’s distribution team in Bokoro. “For the first time in Bokoro this year, we’re giving these children rations of specially formulated supplementary food and giving them a chance to stay healthy.”

The MSF teams have distributed ready-to-use supplementary food, as well as mosquito nets and soap to more than 30,000 mothers across Bokoro, along with a short health and nutrition lesson. The work is hard but staff feel passionately that it’s what is needed if MSF is to make an impact on recurring malnutrition.

“We often arrive at the distribution site as it starts pouring with rain,” says Elizair. But we have to be out in the rain with the women, showing them that it’s important to be here, that it’s worthwhile.”