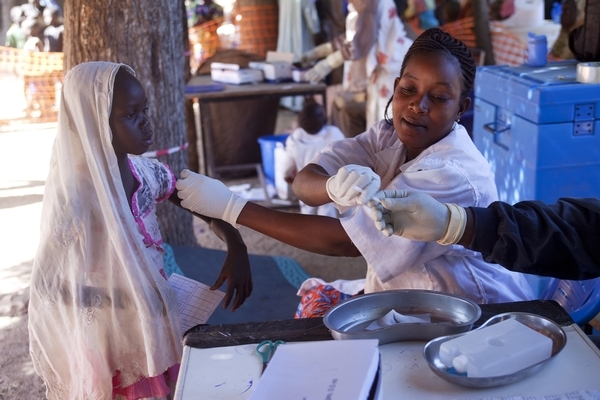 “Now we can see clearly that, in some parts of Chad, there are already very alarming rates of malnutrition among children,” warned Dr Kodjo Edoh, MSF’s head of mission in Chad.

“We are concerned that this situation might also be affecting other districts in the country and we urge the Chadian government and humanitarian agencies to investigate and act.”

Several factors appear to play a role: a below-normal harvest, pests, and a plummeting economy because of reduced remittances from Libya.

Elsewhere in Chad, MSF has just started a nutrition intervention in Yao, in Batha region, incorporating inpatient and ambulatory care, as well as primary health care and vaccination, also responding to high levels of severe acute malnutrition. An assessment is ongoing in the regions of Hadjer Lamis, Abéché and Ouaddai.

In response, MSF will launch, in collaboration with the Ministry of Health, mass meningitis vaccination campaigns targeting over 900,000 persons aged 1-29 in Oum Hadjer, Am Timan, Lere and Pala districts in the coming weeks.

The campaigns will utilize the new MenAfriVac vaccine against meningitis, which confers longer immunity for a wider section of the population than previous vaccines. In all the districts, case management for patients ill with the disease will also be provided.

MSF has been working in Chad since 1981.It presently provides medical assistance in Am Timan, Moissala, Massakory and Abéché, as well as responding to nutritional and epidemic emergencies.

*Editor’s note: Acute malnutrition is caused by a significant imbalance between nutritional intake and individual needs. It is most often caused by both quantitative (number of kilocalories/day) and qualitative (vitamins and minerals) deficiencies. Acute malnutrition is measured by measuring a child’s weight and height and then expressing it as a “Z score”. If a child’s Z score is under -3, it is classified as “severely malnourished”; if between -3 and -2, as “moderately malnourished”. The two categories together are “global malnutrition”. The UN’s Integrated Food Security Classification System considers the “emergency threshold” to be 15% for global acute malnutrition.