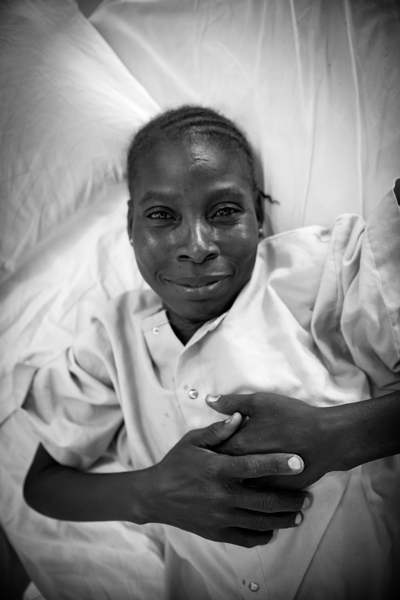 Democratic Republic of Congo: 85% of AIDS patients deprived of treatment

MSF is alarmed by the situation of HIV/AIDS patients in the Democratic Republic of Congo (DRC), the lack of priority given by the Congolese authorities and the withdrawal of donors, all occurring as the Global Fund to Fight AIDS, Malaria and Tuberculosis prepares to celebrate its tenth anniversary on 28 January.

The conditions surrounding access to care for people living with HIV/AIDS in DRC are horrific.

At the Centre Hospitalier de Kabinda (CHK) in Kinshasa, MSF has observed an excessively high number of patients arriving with serious complications resulting from lack of treatment. Their advanced illness creates unacceptable suffering.

"I have worked with HIV-positive patients in many countries in central and southern Africa, but what I'm seeing in DRC has not existed elsewhere for years," says Anja De Weggheleire, MSF's medical coordinator in DRC.

"The situation here reminds me of the time before any antiretroviral (ARV) treatment was available. Our doctors face serious complications every day that could be prevented if patients received early ARV treatment."

The number of HIV-positive people in DRC is currently estimated at more than one million, 350,000 of whom could benefit from ARV treatment. However, only 44,000 are receiving treatment at this time. This represents a 15 percent ARV coverage rate, one of the lowest in the world (of all African countries, only Somalia and Sudan have similar rates).

DRC is also one of the two lowest-ranked countries in western and central Africa in terms of the prevention of mother-to-child transmission of HIV (PMTCT). Only one percent of pregnant women estimated to be HIV-positive have access to PMTCT treatment here. Without treatment, approximately one-third of the babies who are exposed to the virus will be born with HIV.

Despite these disastrous indicators, donors have not given DRC the priority it deserves. What is worse, some donors – such as the Global Fund – are withdrawing or sharply reducing their funding.

This pull-back by donors is directly threatening the lives of thousands of people in DRC. De Weggheleire sounds the alarm. "If nothing is done, it is highly likely that the 15,000 people currently on the waiting list and in urgent need of ARV drugs will be dead within three years. As horrifying as that number is, it represents only the tip of the iceberg when you realise that most people living with HIV/AIDS in DRC do not know their HIV status. Many will die in silence and neglect."

It is crucial that Congolese authorities meet their commitment to provide free prevention services and free treatment for people living with HIV/AIDS. It is also critical that donors immediately mobilise the necessary resources to ensure that patients waiting for ARV treatment are not condemned to die.

MSF has been working in DRC for more than 30 years, operating HIV/AIDS programmes since 1996. In October 2003, MSF was the first organisation to provide free ARV treatment to patients in DRC. Through its healthcare support programmes and its AIDS project in Kinshasa, MSF treats more than 5,000 patients in six provinces, more than 10 percent of the number receiving ARV treatment throughout the country. In Kinshasa, MSF is treating 20 percent of the total number of patients on ARV treatment in the Congolese capital.

Today, MSF is launching a communications and advocacy campaign that will continue throughout 2012 to raise public awareness of the very serious situation facing people with HIV/AIDS in DRC and to encourage all actors to expand ARV coverage.