An outbreak of potentially deadly typhoid fever in Popokabaka, Kwango province, has finally been brought under control with the help of an emergency team from Médecins Sans Frontières/Doctors Without Borders (MSF). Jean-Marc Mavunda, the team's medical manager, looks back on the past two months.

Nestled in the hills at the confluence of three rivers, the health zone of Popokabaka, nearly 400 km southeast of Kinshasa, has been the centre of an outbreak of typhoid fever that has lasted for months.

"Our team was called to respond in Popokabaka after the authorities confirmed the epidemic," says Jean-Marc Mavunda, medical manager of MSF’s emergency team. 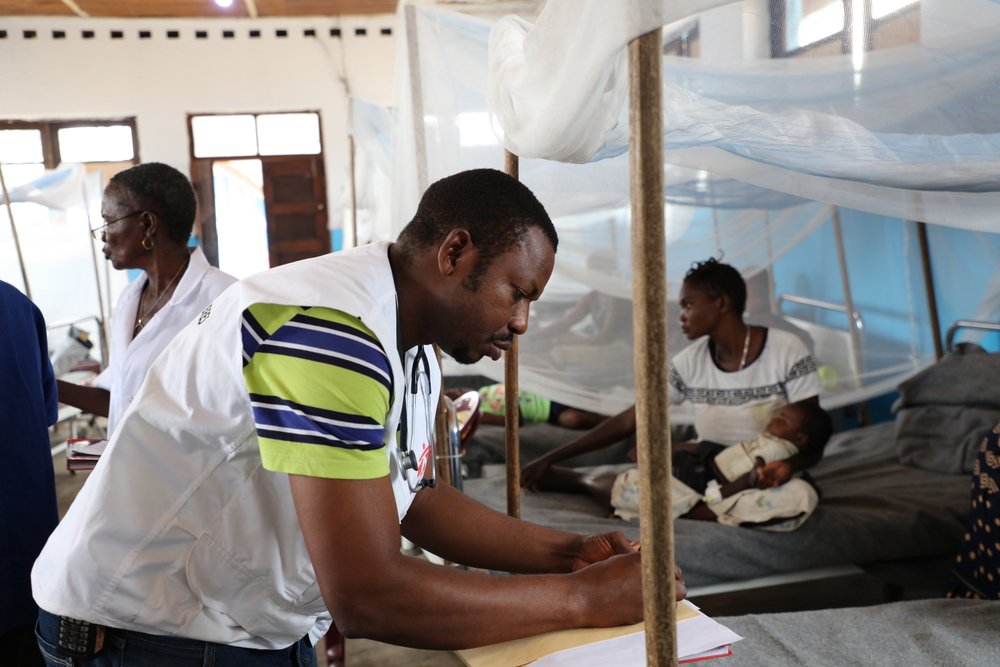 MSF/Franck Ngonga
Robert Lala, a doctor from the MSF emergency team, treats a patient in the paediatric ward of Popokabaka General Referral Hospital.

"But all indications were that the disease had already been present for several months and had already claimed many lives."

Usually spread either by ingesting water or food contaminated with human faeces and secretions, or else through hand-to-hand contact, the main symptoms of typhoid are a prolonged fever, a headache and digestive problems including stomach pains, vomiting and diarrhoea.

"When treatment is delayed, typhoid can lead to serious complications and sometimes death"

Once diagnosed, typhoid is treatable in just a few days with antibiotics.

But diagnosing it can be difficult, particularly in local health centres, because its symptoms are very similar to other diseases, and because laboratory analysis is needed.

When treatment is delayed, typhoid can lead to serious complications and sometimes death.

"How do you expect us to avoid the disease?"

This morning, Chadrac Mbaya is sitting next to his one-year-old daughter La Joie. La Joie was admitted to Popokabaka hospital four days ago with symptoms of typhoid. 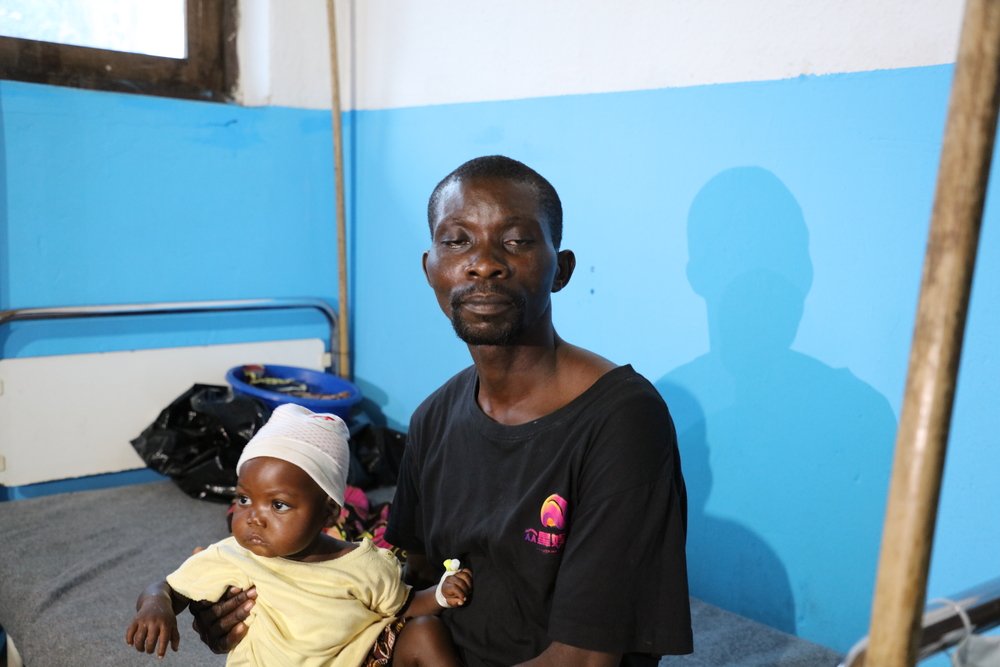 MSF/Franck Ngonga
Chadrac Mbaya with his daughter La Joie, one-year-old, at the Popokabaka General Referral Hospital. La Joie was admitted to Popokabaka hospital four days ago with symptoms of typhoid.

"One night she started vomiting and having diarrhoea," says her father.

"We went to the health centre, but the treatment she received did not improve her condition. She ended up being transferred here. Her sister also had the disease, but fortunately she recovered."

People’s living conditions in Popokabaka mean that outbreaks of waterborne diseases are common.

There is limited access to clean drinking water, while sanitary facilities are almost non-existent in most residents’ homes. 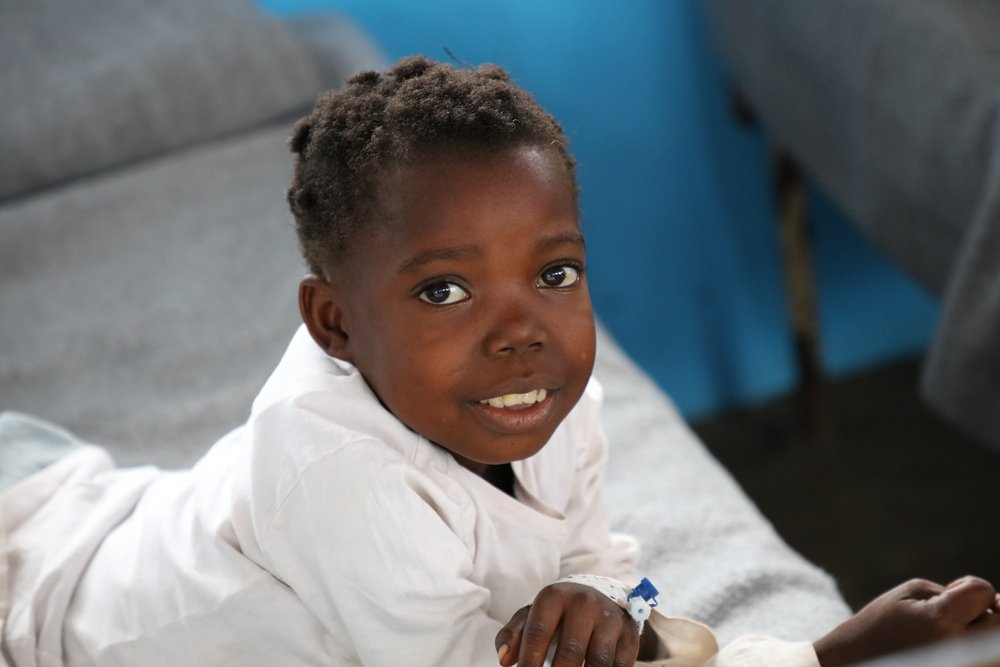 MSF/Franck Ngonga
Olive Akaku, 8, is suffering from typhoid fever. Three days ago, she was transferred to the Popokabaka general hospital, where MSF emergency teams are supporting local staff in the provision of treatment to people affected by the outbreak.

“In this area, people drink water from the river, where we also bathe and clean the dishes,” says Chadrac.

“How do you expect us to avoid the disease?”

To reduce people’s risk of catching the disease as they go about their daily life, MSF health promoters have held awareness-raising sessions in school, health facilities and within the community. 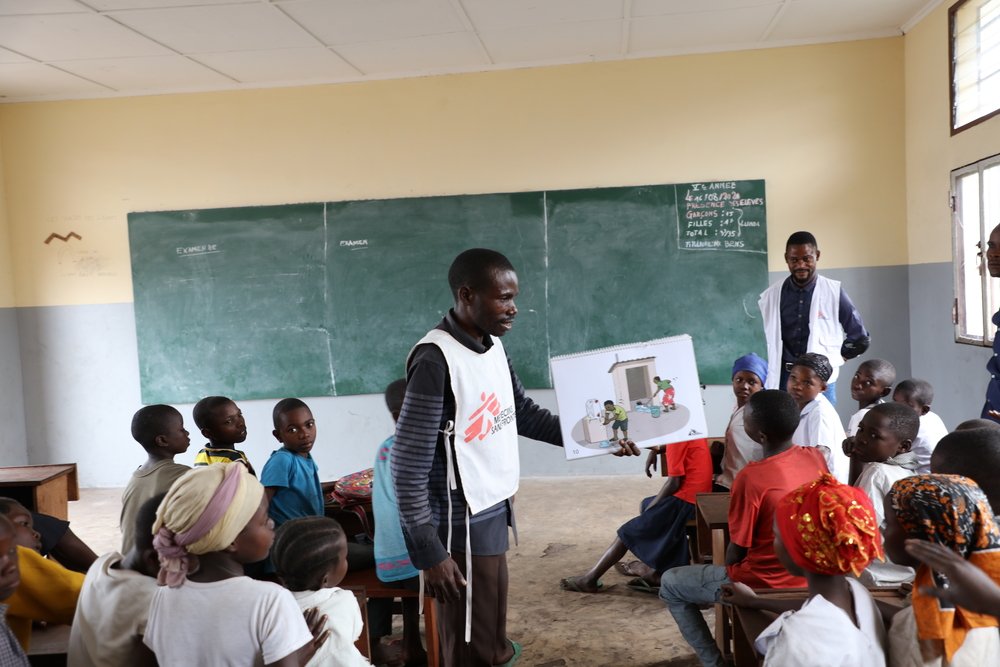 MSF/Franck Ngonga
MSF health promotion team is informing the population of Popokabaka about the outbreak of typhoid fever, its symptoms and how to prevent it.

Meanwhile MSF teams have tracked the course of the disease throughout the area in order to respond quickly and effectively.

"In addition to support for care and sensitisation [of the community], we conducted epidemiological surveillance of the entire zone in order to adapt our response to the evolving situation," says Mavunda. 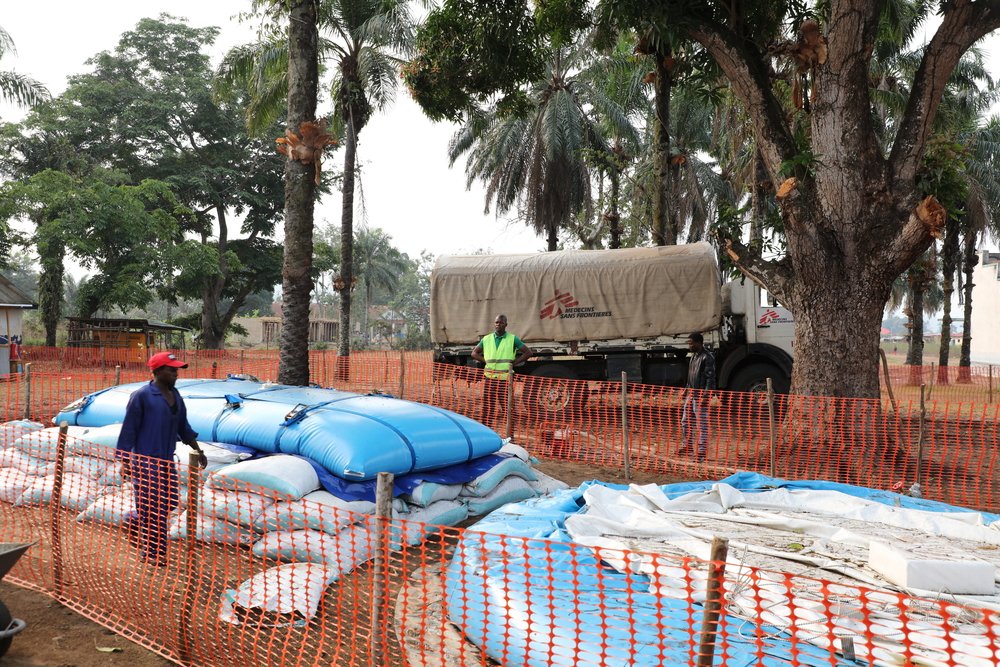 MSF/Franck Ngonga
MSF provides drinking water to the Popokabaka hospital as part of its response to the typhoid fever outbreak.

"This work quickly revealed that the number of cases was much higher than initially estimated. Every day, the hospital was receiving patients with typhoid fever referred from peripheral health centres."

"In total, it is estimated that more than 3,700 people have been affected since the beginning of the year." 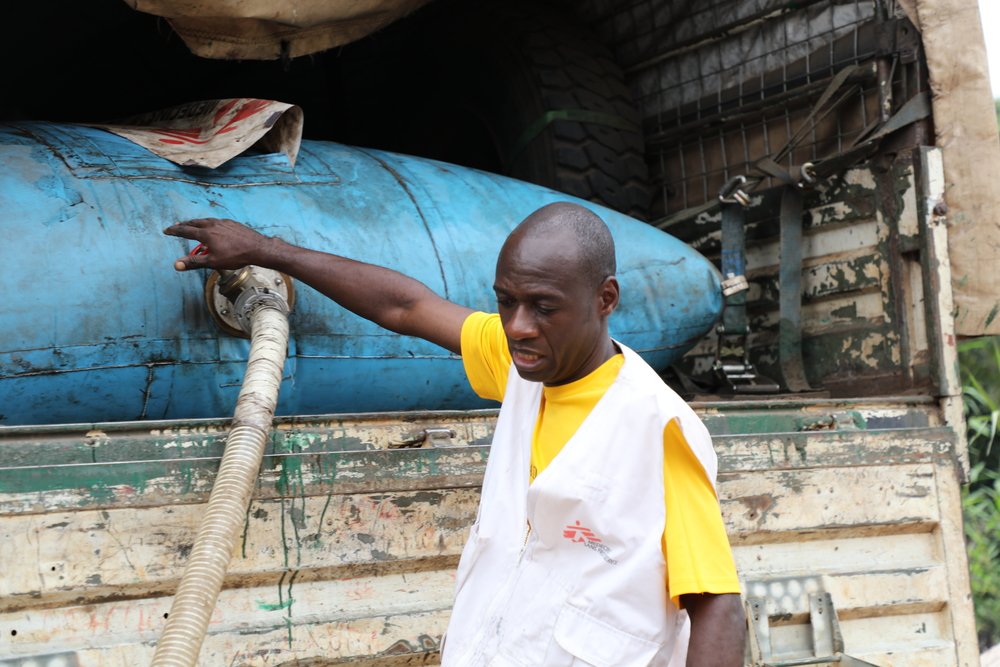 MSF/Franck Ngonga
Magloire Mwanakiese is a water, hygiene and sanitation officer in the MSF emergency team sent to Popokabaka to respond to the typhoid fever outbreak.

Surgery for patients with complications

Endemic in sub-Saharan Africa, typhoid can cause serious complications in 10 to 15 per cent of patients, including digestive haemorrhage, intestinal perforation and peritonitis, all of which require surgery. 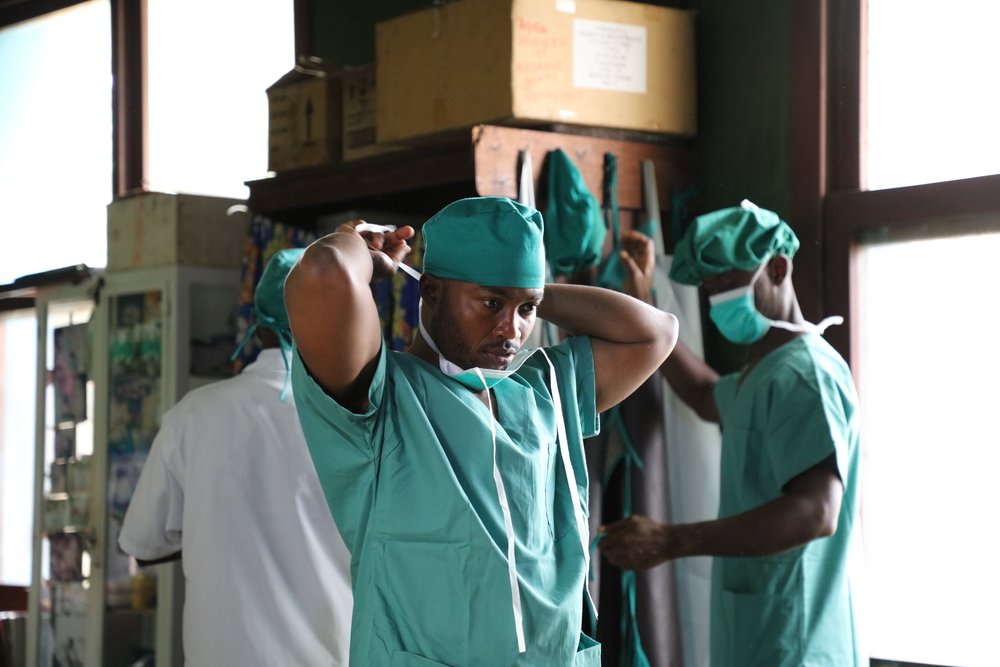 "Given the number of complicated cases in the area, we directly integrated a surgical component into our response," says Mavunda.

"We've dealt with a lot of cases of peritonitis, which is a serious infection that can easily lead to death. Acute peritonitis sometimes requires multiple operations on the same patient. Before MSF launched its response, 29 in-hospital deaths had been reported, almost all of them post-operative. Providing surgical support and post-operative care was therefore fundamental.” 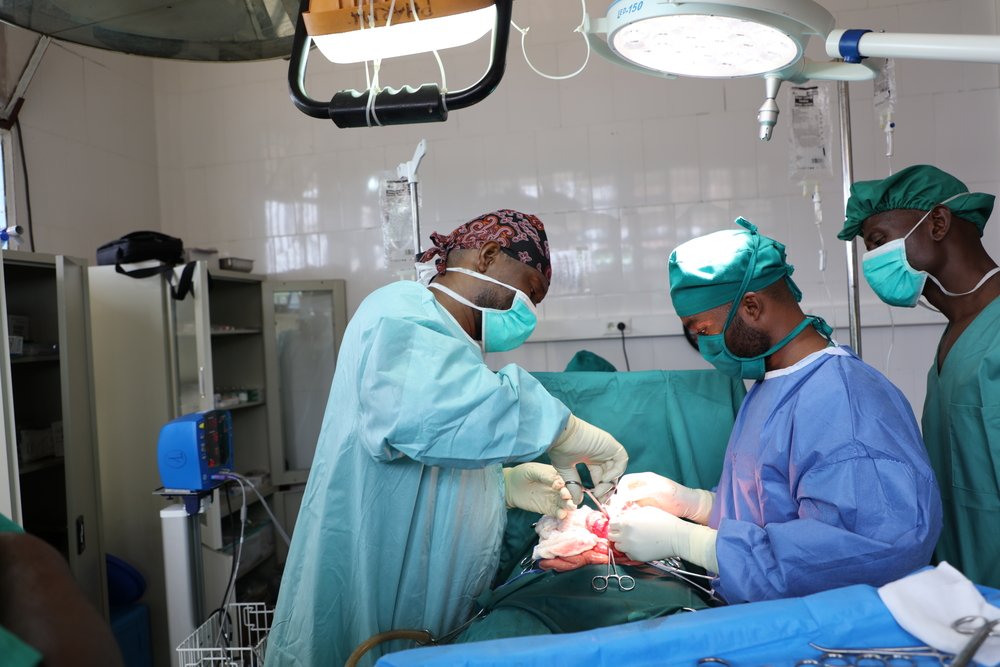 MSF/Franck Ngonga
In the operating theatre of Popokabaka General Referral Hospital, MSF surgeon Johnny Kasangati and his team perform surgery on a patient with a perforated bowel due to typhoid fever.

Eleven-year-old Tharcisse developed complications from typhoid and has already had four visits to the operating theatre.

"The first three operations were performed last May and June," says his father, also called Tharcisse. 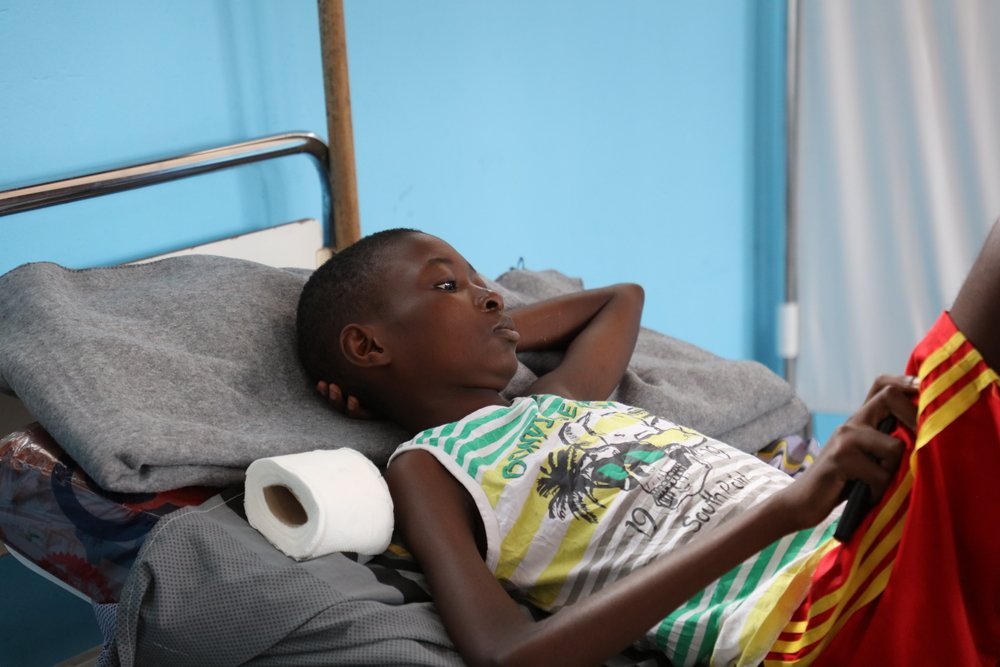 "After the first two, the situation had not improved. I was about to take him to Kinshasa to be treated there, but when I heard that the MSF team had arrived, I decided to wait. And it was the MSF team that organised the rest of the operations.”

"Before MSF launched its response, 29 in-hospital deaths had been reported, almost all of them post-operative. Providing surgical support and post-operative care was therefore fundamental."

Three-year-old Mabweni also had to be operated on a second time after he was admitted to Popokabaka hospital experiencing complications from typhoid. 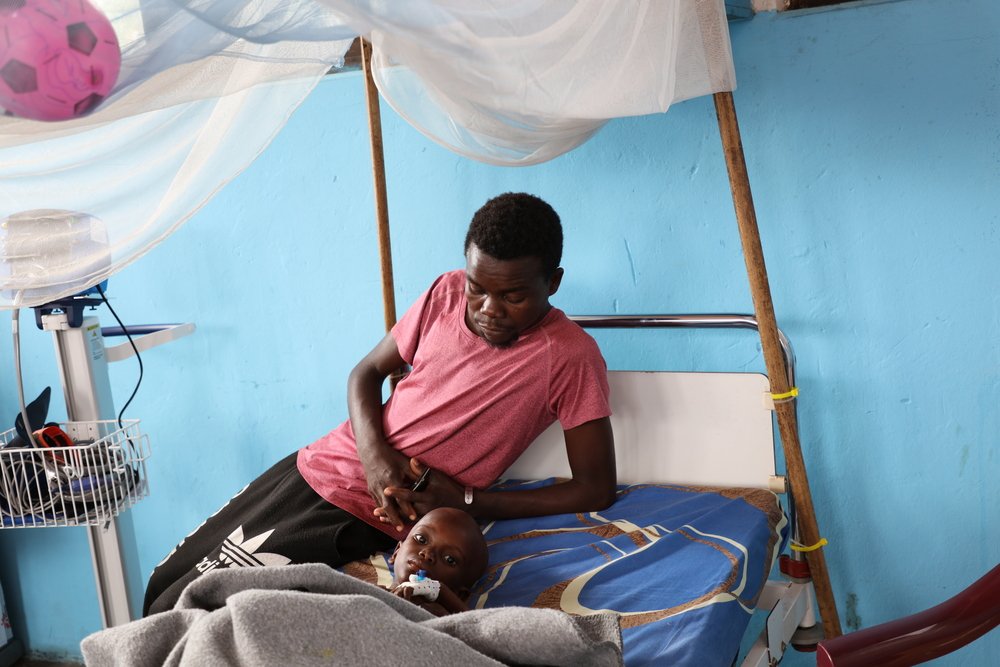 MSF/Franck Ngonga
Mabweni, 3, is being hospitalized in the surgery ward at Popokabaka Hospital. The boy has undergone two surgeries following complications related to typhoid fever.

"He had his first operation on 4 July,” says his father Julva.

“Three days later, there were other complications and he had to go through another operation. This has been done and we are waiting for him to recover to go home.”

From mid-July to mid-September, 2,180 patients were treated and 20 surgical operations were performed with MSF’s support. 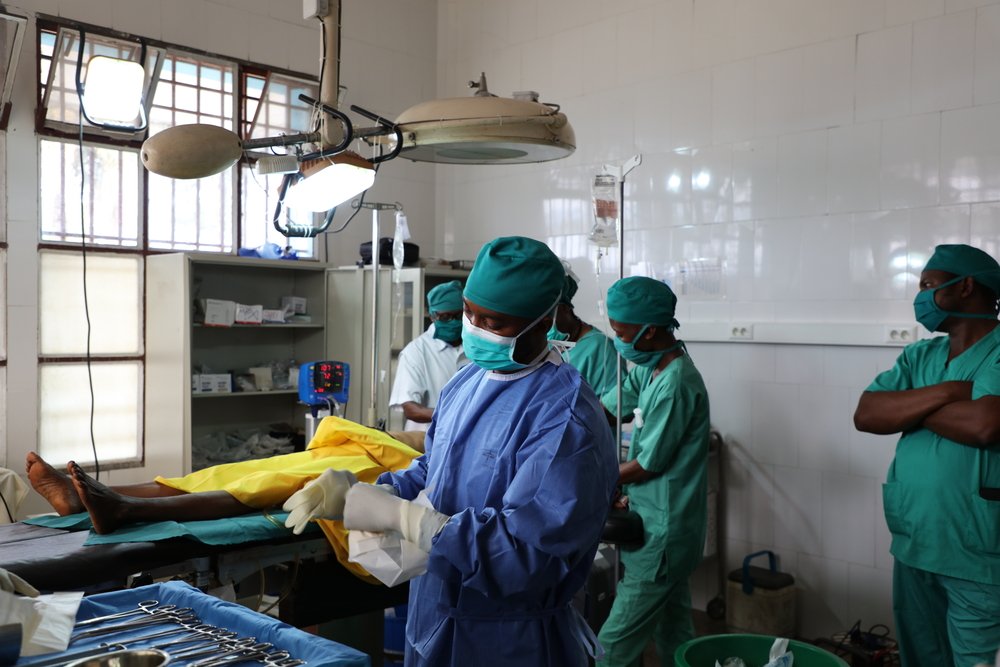 MSF/Franck Ngonga
In the operating theatre of Popokabaka General Referral Hospital, MSF surgeon Johnny Kasangati and his team perform surgery on a patient with a perforated bowel due to typhoid fever.

In addition to treating typhoid fever, the MSF team also operated on 11 people for surgical emergencies and treated more than 3,500 patients suffering from simple and severe malaria.

Cases of typhoid fever are now decreasing, allowing the MSF team to respond to emergencies elsewhere in the country, but staff at health facilities across the region will need to be vigilant in the coming weeks. 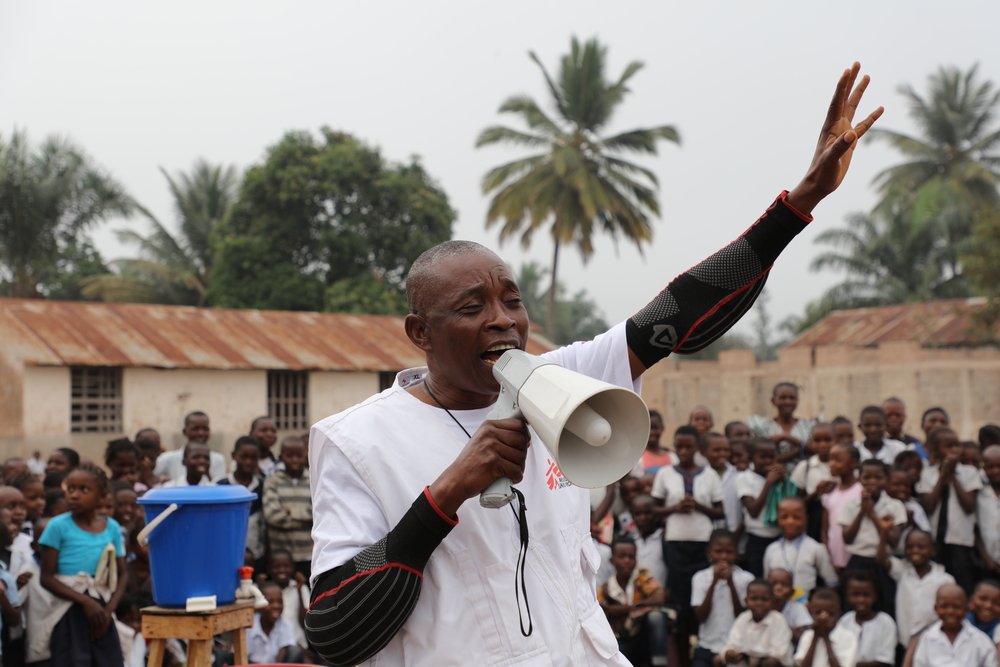 MSF/Franck Ngonga
MSF health promoter Lazare Bolepomi is informing the population of Popokabaka about the outbreak of typhoid fever, its symptoms and how to prevent it.

Water, hygiene and sanitation – the main factors in the spread of typhoid fever – are still far below what is needed in the Popokabaka area, and the onset of the rainy season could lead to an increase in cases.

Before heading elsewhere, the MSF emergency team donated medicines, medical and surgical equipment to Popokabaka hospital to strengthen care, but a more structural response is needed to improve people’s living conditions and tackle the disease at its source. 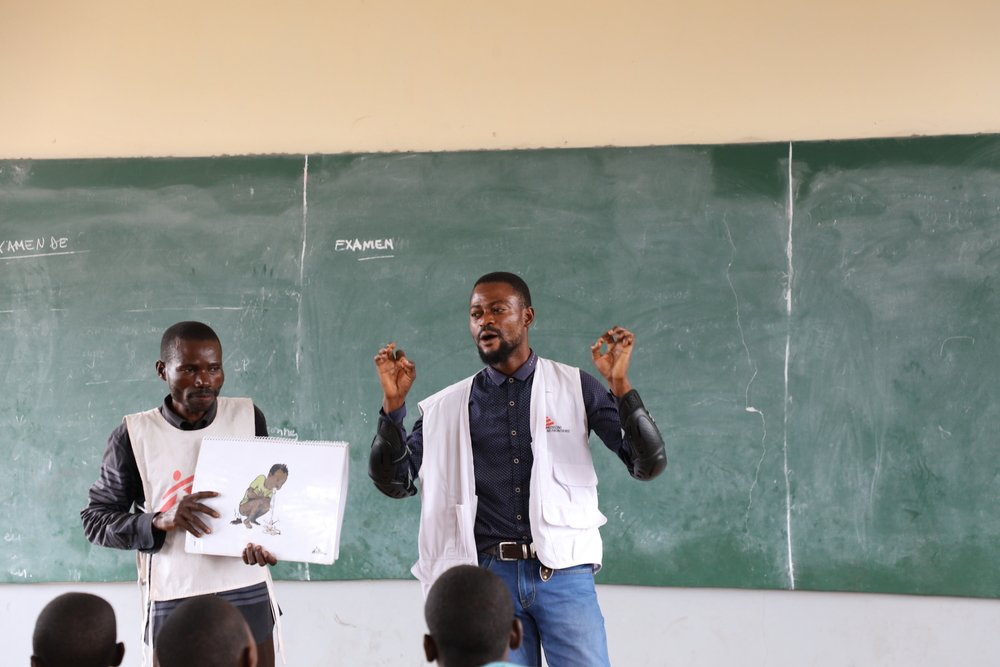 MSF/Franck Ngonga
MSF health promotion team is informing the population of Popokabaka about the outbreak of typhoid fever, its symptoms and how to prevent it.

MSF’s emergency team supported the Ministry of Health in treating patients with typhoid fever at Popokabaka hospital and seven other health facilities in and around Popokabaka city from mid-July to mid-September 2021.