DRC Ebola outbreak: “We knew we had to act fast”

Patient Muhindo Kamavu was one of four experienced MSF nurses who were the first on the ground alongside the Ministry of Health to respond to the Ebola outbreak declared on August 1st in Mangina, North Kivu, Democratic Republic of Congo. A veteran of both Ebola outbreaks this year, Patient has now finished his work in Mangina and headed to Butembo where he is setting up the response to positive cases diagnosed in the town of around 1,000,000 people.

“On August 2nd, I received a call telling me Ebola had once again broken out in Congo and MSF were set to respond. Given that I have experience working with Ebola, they asked if I would be willing to come. ‘Sure,’ I said. ‘I’m available. Let’s go.’  I was on a plane less than 48 hours later.

Our team of four experienced nurses arrived in Beni on August 4th, and we headed straight to Mangina that afternoon, to the local health centre that was at the epicenter of the outbreak. We knew we had to act fast. When we arrived, we saw that the centre was overwhelmed. They were doing their best, but the patients were all together in one ward of the hospital and they weren’t properly isolated. Staff and visitors were coming in and out. Inside there were bins and medical equipment on the floor. A number of health staff were ill, and the number of patients was increasing each day. 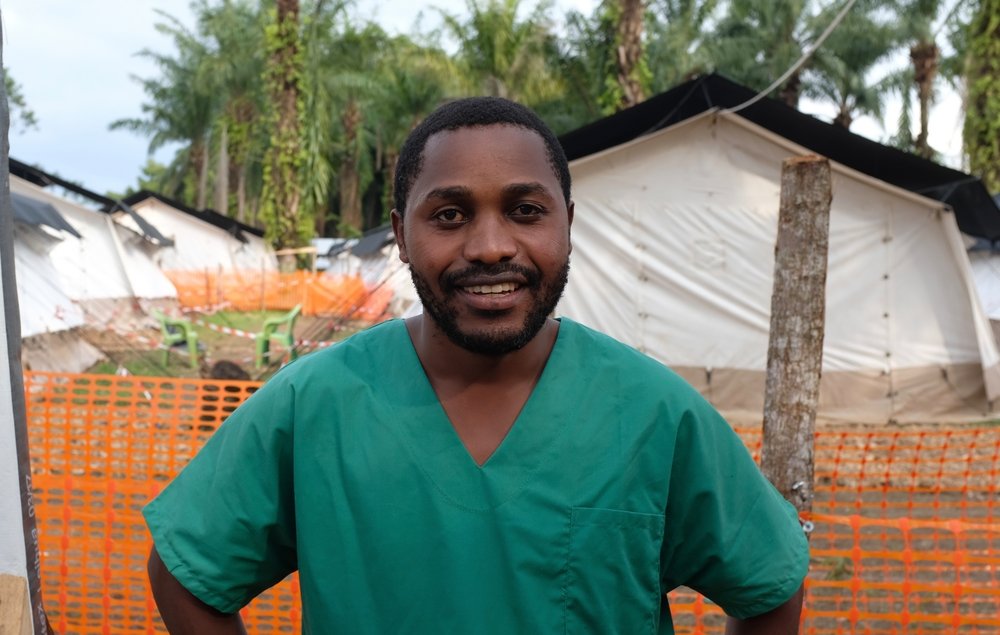 This would be bad in a normal clinic, but during an Ebola outbreak, it’s dangerous. Without proper hygiene, health staff can easily get infected and then spread the virus to patients who visit the centre for other treatment.

It was clear we couldn’t just wait for the Ebola Treatment Centre to be finished. The health centre was overwhelmed and people were dying now. We returned to Beni, prepared some material, and headed back to the health centre in Mangina.

I wouldn’t say we were frightened of going inside, but we were a little nervous. The working conditions were unsafe, but we could see people were dying so we knew we had to help. 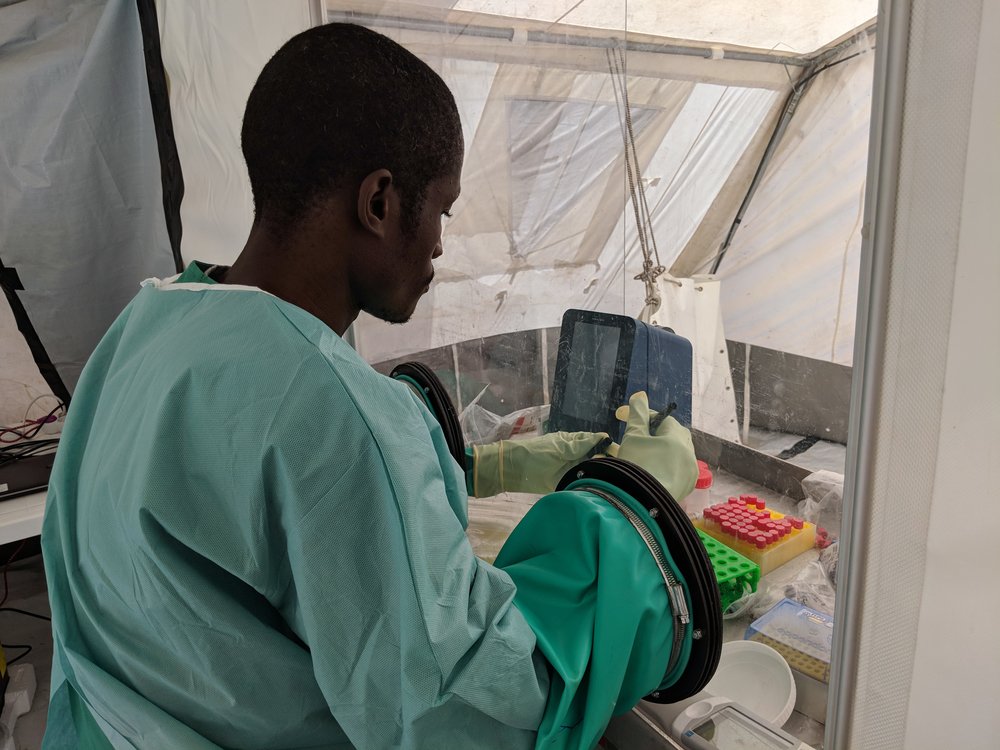 Karin Huster/MSF
The laboratory tent is separated by plexiglass from the high risk area. the glove box allows to work from the low-risk area with samples in high risk.

From there, we immediately established a fixed circuit for staff and patients in the centre. Having the right processes and patient flow in place is vital when you’re treating Ebola. It cuts down the risk of cross-contamination and makes the work safer for everyone.

Part of that process is establishing a set order to the day. We organized regular ward rounds and made sure there were staff present day and night. We ensured there were three staff at the triage out the front of the hospital and taught them how to identify patients who might be infected with Ebola. Suspect Ebola patients must be isolated before they can enter the general wards and spread the infection to staff or other patients.

We also tried to set up case investigation for everybody who came through the triage with Ebola-like symptoms. We made sure forms with contact details were filled out, so the teams working in the community could monitor contacts and understand how the virus was spreading.
Thankfully, after a few days, MSF reinforcements arrived. We could now focus on patient care while our logistic and water and sanitation team worked day and night to complete an Ebola Treatment Centre that could care for patients in a safe way. It was incredible. We’d make visits to the site (about 300 meters from the health centre) just one day later and see a totally different hospital appearing. 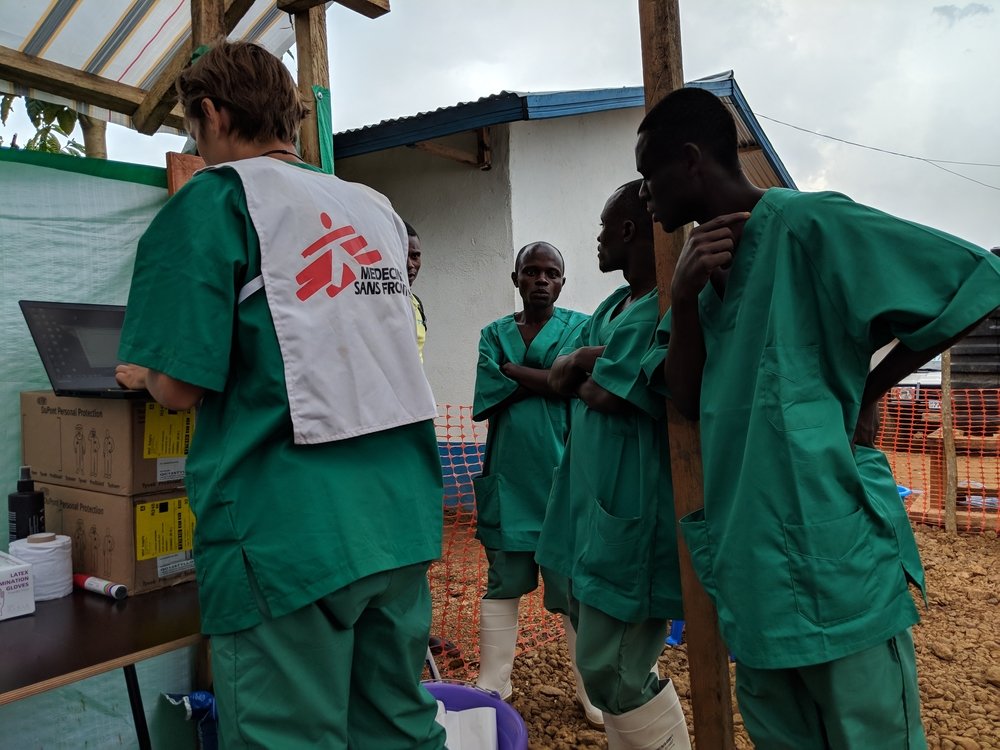 Karin Huster/MSF
Maria, watsan specialist, putting the final touches to the dressing section of the TC.

On the day we moved to the Ebola Treatment Centre, we had 37 patients and in the days that followed we had many more. But last week there were eight patients, two days ago five, and today, only two.

When we see patients walk out cured, we dance. We are just so happy. I’m very proud of the work that we have done. It’s been hard, but we’ve achieved good results. My Congo is full of people who are capable of doing amazing things. We just need the support. We started with 4 experienced nurses and now we have trained 44. They’re the fruits of our labour and I am very proud.”