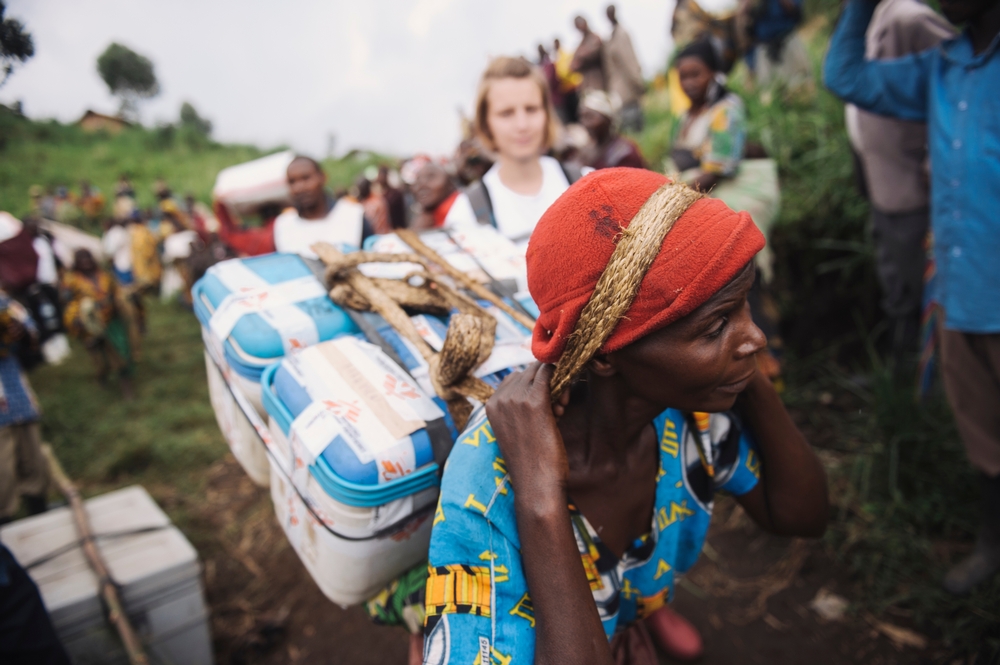 Photojournalist Phil Moore gives a first-hand account of what it's like to accompany a Médecins Sans Frontières/Doctors Without Borders (MSF) vaccination team into the remote wart-torn wilderness of eastern Democratic Republic of Congo (DRC).

"Nothing ever goes to plan in eastern Congo. It was supposed to take three hours to drive from the MSF base in Masisi-Centre to the village of Kazinga.

Six hours after packing into the Toyota Land Cruisers, we finally arrived, having got stuck in the mud, stuck behind logging lorries, and stuck rebuilding precarious log bridges over streams and rivers, which subsided with the passing of each of the five vehicles in our convoy.

I had no real idea where we were going. Kazinga was just a small dot in the middle of a great expanse of nothingness on the most detailed map I could find lying around the base.

"You can't really trust the positions on it, anyway,” one of the team told me. The other villages that we expected to visit, and in which we would spend the night, did not even feature.

My only notion was a roughly scribbled sketch map, giving approximate walking time between the sites. On the "official" map, these areas were simply great voids.

Phil Moore
Alpha Atafazali Bahunga raises awareness of vaccination ahead of a vaccination session in the village of Kitobo II in Masisi territory in the east of the Democratic Republic of the Congo on August 14, 2014. The session in Kitobo was extra to the planned Intense Vaccination Campaign organised by MSF over the period of a week, due to conflict between Kitobo and Kalungu which prevented residents from crossing between the two villages.

In Kazinga, MSF assembled a team of 55 porters to carry all the equipment necessary to perform the mammoth task of vaccinating communities so far removed from any kind of infrastructure.

We left the last road we would see for four days. Rain-clouds loomed overhead, and the narrow mud trails were already getting churned up by our boots.

The rain that poured down ten minutes into our journey would not be the first. The thick vegetation of these verdant hills needs a lot of water to thrive.

If neighbouring Rwanda is dubbed "The Land of a Thousand Hills", then eastern Congo must surely be the land of ten thousand, and we immediately began sliding down one of them, surrounded by deep forest and rising, rounded peaks.

At times, coarse blades of elephant grass arched over the path, brushing against our faces.

I have rarely felt isolation in Congo, but this first day's trek crossed between the territory of two different armed groups, their territories eerily demarcated by emptiness, where the sound of our footfall seemed amplified.

Over the course of the week, we would come across entire villages that had been abandoned due to the conflict. The jungle had taken over pathways and ultimately houses.

In the village of Luho, the only giveaway that it was once occupied was the occasional glimpse of bamboo marking a doorway. Other than that, every structure had become just another mound of vegetation, reclaimed by the greedy weeds. 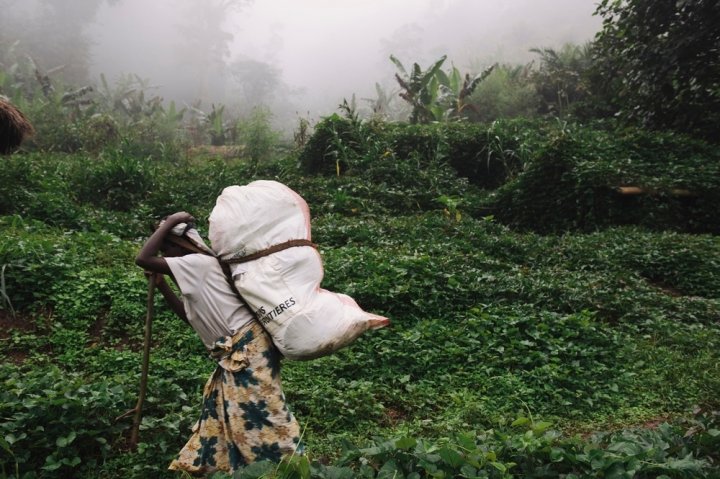 Phil Moore
A porter carries a sack of vaccination equipment past houses overgrown by flora in the abandonned village of Luho in Masisi territory in the east of the Democratic Republic of the Congo on August 13, 2014. Luho is one of several villages in the area which have been abandonned due to the conflict, in an area held by rebel group.

Along the trail, we would occasionally pass reminders of why so much is deserted: groups of men perched on hilltops, dressed in civilian clothes but with AK-47 rifles slung over their shoulders, and Walkie-Talkies dangling.

Since we left Masisi, there has been no cell reception, and the only means of communication is by radio or satellite phone.

The terrain was tough, the mud making rubber boots a necessity. Within two hours of starting, I had a huge blister on the heel of my foot which stung with every descent as my feet slid inside the boots.

My legs warmed to the pace, but every time I stopped to photograph it was difficult to get going again, coaxing the lactic acid from my muscles.

But whatever my complaints, I was only carrying 20kg on my back; the more laden porters have huge cool-boxes slung between them on bamboo poles, the only way to keep live vaccines cold enough to survive the week. If they got too hot, the whole endeavour will be pointless.

Dusk was fast setting when we reached Ngomashi, the first stop and where we would spend the night. Thunder had been rumbling over the hills, and lightning forked across the sky, heralding much more mud for the following morning.

The group split into small teams and parted ways in order to cover the maximum ground. As we passed through small villages to our vaccination site, Papa Pascal, an MSF health promotor, was calling out to all the mothers in the village, telling them to bring their children to Kishee for vaccination.

These are places seemingly forgotten by the state, so maximising the number of people this campaign would reach was imperative.

When we arrived in the village of Kishee, a man was constructing a new house from thin sticks covered with fresh, green palm leaves. Next to this small dwelling lay the crumbling remains of the church.

The brick walls are disintegrating and lined with moss. Its roof is gone. Over the benches made from bamboo logs, dried palm fronds provide shade from the occasional glimpse of sun, although would offer little shelter against the rain clouds that loomed overhead.

Crowds of mothers quickly assembled outside as the team unpacked syringes, rubber gloves, vaccination cards and began preparing the vaccines.

Phil Moore
A militia man of an armed group carries an AK-47 in the village of Kalungu II following an MSF vaccination campaign in remote parts of Masisi territory in the east of the Democratic Republic of the Congo on August 13, 2014. The village is in the heart of territory controlled by an armed group.

Within a short space of time, the sound of children's scream pierced the air, their first encounter with a hypodermic needle. A few brave children stood obediently waiting for the alien jab, their faces stoic with the needle-prick.

"I have seen people being killed"

As dusk fell, I spoke with Amin Bandu, a 17-year-old girl who lives in the neighbouring village of Katanga.

There is no health centre in Kishee nor Katanga; people are obliged to go to the health centre in Ngomashi, the trek we had made that morning. She described the difficulties of living in the area.

"To reach Ngomashi when there is insecurity is impossible, it's terrifying. … We are often attacked by armed groups," she explains, "I have seen people being killed".

It turned out the group we had passed as we left Kazinga the previous day was feared for these attacks.

That night, whilst asleep on the floor of the mud-hut where Amin and I had spoken, I was awoken at 1 am by a very different kind of army: ants had invaded my sleeping bag and were biting me all over.

I lay awake until my alarm rang out four hours later. My eyes were as dreary as the morning that greeted us; the village was shrouded in mist, the dull light just about showing the outlines of the hills across which we would trek on our way to the next village.

From Kishee, we passed through Amin’s village, having crossed a very rickety bridge spanning the river. The bridge is made from creaking bamboo and weathered vines. It flexed and stretched with every step, and I looked for vines to grab in case it finally gave way under my weight.

Just prior to this bridge was a "check-point", manned by militia men from one of the armed groups. Whilst their presence was not threatening when we passed with our band of porters (they had received instruction from their commanders to allow us free passage) the real negotiations were to ensure the porters had free passage on their return journey after the vaccinations were over.

The village of Kalungu marked the furthest point of our expedition, and it is seemingly completely removed from the body politic. But globalisation has trickled in to this remote place, with plastic flip-flops and basic cooking pots, their price still scribbled on in black pen: "$8".

Phil Moore
Mothers and their children have vaccination cards filled out after receiving vaccines as part of an Intense Vaccination Campaign in the village of Kitobo II in Masisi territory in the east of the Democratic Republic of the Congo on August 14, 2014. The session in Kitobo was extra to the planned Intense Vaccination Campaign organised by MSF over the period of a week, due to conflict between Kitobo and Kalungu which prevented residents from crossing between the two villages.

Brightly coloured umbrellas covered figures running between the wattle and daub huts, under the huge storm that erupted in the afternoon. And then there are the guns of the militia men that pass through the village.

The people here cultivate very little; fields have been abandoned due to the conflict. This meant that food was scarce, despite the rich vegetation that surrounded us.

"Fou fou", a mixture of water and flour, was the ubiquitous meal, often made by pounding dried bananas in a huge mortar and pestle. We would sometimes eat in the mid-afternoon, but on some days, the first meal came once the day's work was over, as night set in.

The weekly market in Kazinga was abundant, but aside from the day's travel to get there, villagers must negotiate the armed groups, and issues of ethnicity can quickly deteriorate.

Five days after we began this journey, we finally got back to Kazinga.

The market stalls were empty, and armed men were prolific. As hail beat down on a small tin-roofed hut, I sheltered with three of them. An AK-47 stood propped in one corner, a rocket-propelled grenade launcher in the other.

Symbols, in part, of the factors contributing to the lack of development that has reached this land.

It was not until six hours later, having repeatedly got stuck in thick mud, that the first signs of government authority appeared.

As we approached the main road, government soldiers stood by the roadside. As roads disappear, so does the government’s influence, and off the major axes, one enters the fiefdom of Congo's myriad armed groups."