Following the outbreak of violence at the beginning of the year in Ituri province, Democratic Republic of Congo (DRC), tens of thousands of people remain displaced. Many are living in Bunia, northeastern DRC, where MSF is supporting basic healthcare in three health centres, and is helping refer severe cases to the regional hospital and a private clinic.

Teams have installed a water supply and erected latrines and showers in the two camps in the town. MSF teams are also working on the lakeshore of Lake Albert, which borders Uganda, and in and around the town of Mahagi.

Outbreaks of violence are continuing and so people are still on the move. According to UNHCR, over 57,000 Congolese people have fled to Uganda since mid-December, the vast majority of them crossing Lake Albert by boat to find refuge in Kyangwali region. The refugee population in Kyangwali settlements jumped from 36,000 in December 2017 to 68,700 in March 2018. On their arrival refugees are finding that the number of people is putting pressure on the capacity to respond. Since mid-February MSF has provided 6,000 consultations at its 24/7 clinic in the Kagoma reception centre in Uganda and has vaccinated over 15,000 children and women of childbearing age. As of March, a cholera outbreak had left at least 36 people dead and 1,792 severely affected had been hospitalised.

“This is the first time I’ve fled DRC”, explains 53 year-old Imani who lived through the war in Ituri in the 2000s. “It’s different this time.
Imani

“This is the first time I’ve fled DRC”, explains 53 year-old Imani who lived through the war in Ituri in the 2000s. “It’s different this time. In the 2000s our homes were torched too, but we were able to go back to our villages. Now people are being hunted down and killed. The attackers chase us with dogs into the forest.”

We met Sifa, who is in her forties, the day after she arrived in Uganda.  She had a similar story to tell. She had already been internally displaced in Ituri 15 years ago.  “We were first displaced to a village called Kafé, near the lake. But the attacks kept getting closer. The attackers were determined to kill everyone and there was nobody to protect us. I decided to come here with my kids who are 12 and 15 to be safe. My husband stayed behind in Congo so he could try and keep working.” 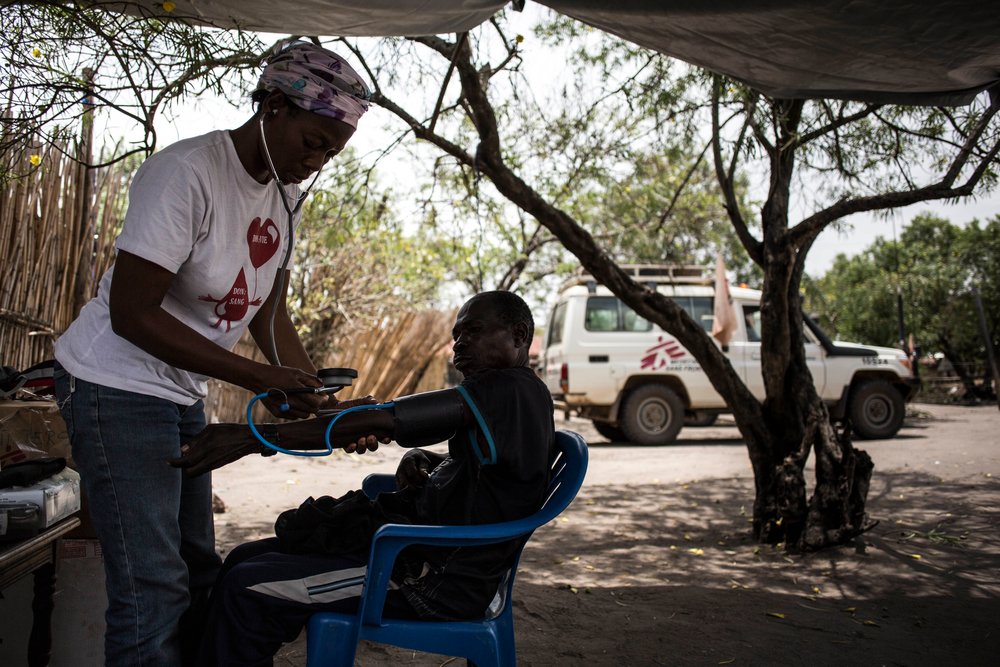 An MSF nurse has a medical consultation with a Congolese man on 5 March 2018 in Tchomia.

In transit in Kagoma Reception Centre for the past ten days, Michel told us some of his friends and relatives had been killed with machetes and spears. Those who managed to survive took refuge in the camp near Bunia General Hospital. “I was training to be a nurse but I preferred to use the money I’d put aside for my studies to cross the lake and come to Uganda.”

20 year-old Baraka is a fisherman from Kafé. “On March 8th, at about 5 in the morning, villages on the banks of the lake were on fire. My nets were in the water and I pulled them in quickly to get the fish. When I got closer to Kafé, I saw a woman running towards the lake. A man armed with a machete caught up with her and killed her. My pirogue is just for fishing and wasn’t up to crossing the lake, so I went to the market town, Chomia, to get a boat that could get me to Uganda. My wife and two children had already crossed over. It cost me 10,000 CFA francs.”

Tales of houses systematically torched, people hunted down in the forest and murdered. A succession of atrocities recounted in a climate of uncertainty over what is behind the violence and the identities of its perpetrators. But for many of the refugees arriving in Uganda, what is certain is that these events are more than a resurgence of the historical tensions that for many decades have opposed Lendu and Hema communities in the region.

Many say they do not know the whereabouts of their families who they were separated from during their flight. Children, pregnant women and the elderly have to fend for themselves. Aged about 20, Henriette has been living in Kagoma reception centre for the past ten days. She fled when her village in Djugu came under attack in the middle of January. She does not know where her husband or her child are since losing them in the confusion of the attack and flight. She gave her suitcase containing her clothes to pay for the crossing to Uganda. Four months pregnant, she has no one. 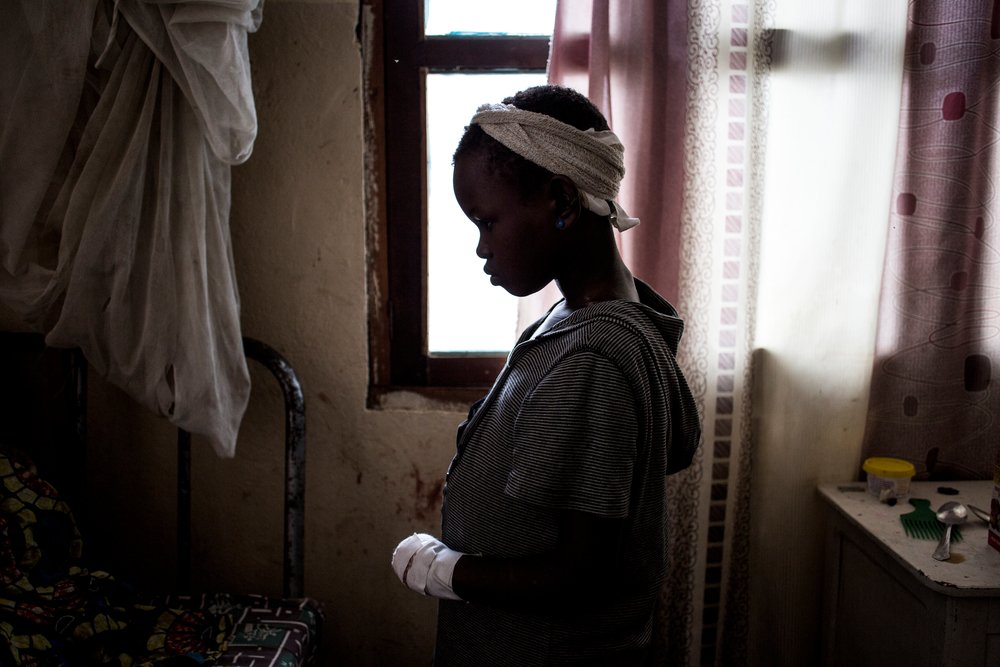 John Wessels/MSF
Mace-Grace (11) recovers in a hospital room, she lost her mother, three siblings and her left hand after an attack on her village.

A system under strain

While a system has been set up in Uganda to provide protection and assistance to the refugees, facilities in Hoima district are no longer able to cope with the numbers of people who continue to arrive and there is still insufficient humanitarian aid. Supporting their families is a challenge for the newly arrived. “A week ago we finished the food given to us by the authorities. My uncle manages to find us something to eat, mainly little fish from the lake”, explains 14 year-old Joanne who arrived a short time ago in Maratatu camp.

Father of 8 Emmanuel had decided to return to Ituri less than 20 kilometres from Chomia to see how his fields were doing and bring back some food. “I went to the field very early in the morning to get some manioc. I saw flames in the villages near the lake. I didn’t know what was on fire. As everything had seemed calm in the previous few days, people in my village who’d been sleeping in the forest because they were scared of the attacks had returned home. The attackers came back at dawn. They attacked people with machetes, killing as many as they could. The only way for me to survive was to flee again. I brought nothing back with me.”