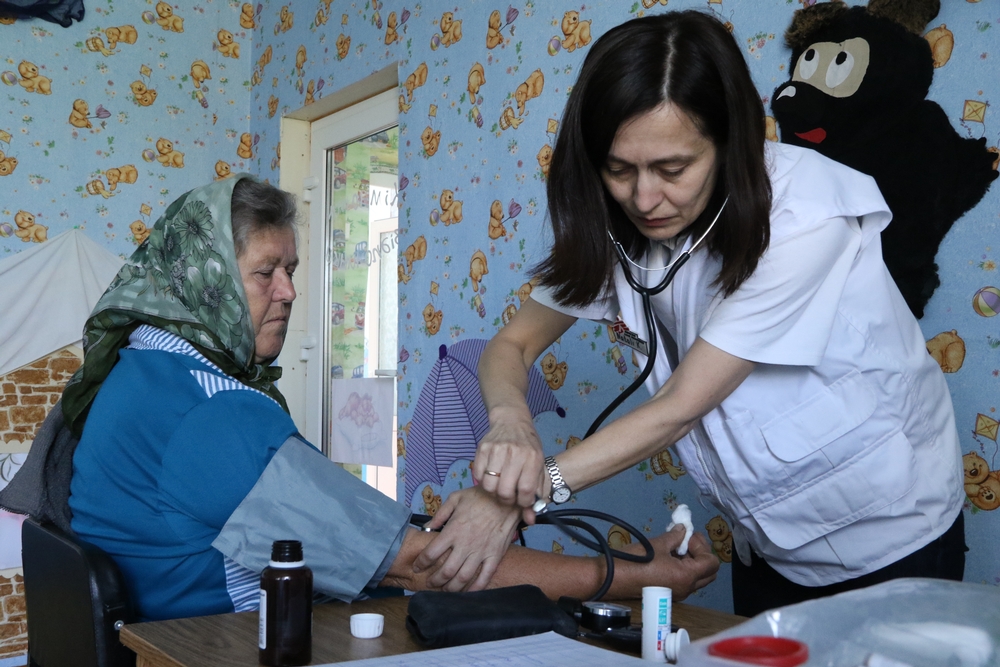 Eastern Ukraine: “We are lost here and very scared”

It’s been more than two years since conflict erupted in eastern Ukraine, yet thousands of forgotten victims remain left behind in areas close to the now unmoving line of contact.

More than 9,300 people have been killed and some 21,500 injured since mid-April 2014 . Despite fading from the international spotlight, there are still frequent violations of last year’s ceasefire which continue to kill people on a regular basis.

The protracted conflict has taken a heavy toll, especially on people who were unable to escape at the height of fighting and who are now left behind close to the line of contact where daily shelling is again the reality.

Many elderly people remain stuck with little to no assistance, suffering acute mental health needs and with minimal access to essential healthcare for chronic diseases.

Médecins Sans Frontières (MSF) is currently one of the only international organisations providing much-needed direct medical and mental health assistance in areas close to the conflict.

MSF teams, based in Bakhmut and Mariupol, are running mobile clinics and supplying facilities with drugs and equipment. They travel to around 40 locations to reach those most in need.

They operate clinics from empty schools, community buildings, or within abandoned health facilities, and some people have even opened up their homes to offer MSF doctors a location to provide care.

While some health facilities are today recovering in many locations along the line of contact, medical staff have still not returned due to the village’s dangerous proximity to the ongoing conflict.

In some areas, many clinics or hospitals remain without medications. In others, health facilities have been partially or completely destroyed.

The lack of treatment for chronic diseases such as diabetes and cardiovascular conditions is one of the major medical needs facing elderly people. In the line of contact areas, MSF is working to fill gaps created by a severe lack of healthcare.

In cities to where people have fled, such as Mariupol, high rates of unemployment and rampant inflation mean people living with such diseases simply cannot afford essential treatment. Without care, they are left with serious risk of medical complications.

Due to the high numbers of elderly patients, more than half of MSF’s patients present with cardiovascular disease.

Diabetes is also common, with approximately one in ten of patients on or requiring treatment.

Providing care for chronic diseases is a challenge, particularly in areas which are not always easy to reach because of insecurity.

“It is essential that patients with chronic diseases have access to uninterrupted treatment,” says Dr. Gabriela Das, MSF medical coordinator.

“In order to avoid medical complications, if we cannot reach at-risk patients on a regular basis, we ensure that they have a ‘buffer’ amount of medication until the next consultation.”

Over one million pensioners displaced

It is estimated that of the 1.75 million people who are still displaced by the conflict, more than one million are pensioners.

The average pensioner receives the equivalent of just 42 euros per month. Yet with the monthly price of medication for chronic diseases costing 14 euros, around one third of the pension, treatment remains out of reach for many.

Raisa, 80 years old, is a pensioner living in Taramchuk, a small village close to the line of contact. In August 2014, her house was destroyed by shelling and she now lives in the house of a neighbour who fled the village when the conflict intensified.

“We are lost here and very scared,” says Raisa. “Life here is terrible, and sometimes I have suicidal thoughts. I am in despair to find myself in this situation in my old age.”

The elderly are particularly vulnerable. Many have had to say goodbye to their children and grandchildren who left to find safety in larger cities, and they often remain alone without emotional support.

Living with direct exposure to the conflict, anxiety and depression are commonplace. MSF began mental health support as part of its medical activities in July 2014.

Since then, MSF has conducted around 18,000 individual and group consultations. A significant number of these consultations are for the elderly.

“With the elderly people we see, sometimes they are scared and they feel like they are going mad”, says Viktoria Brus, MSF psychologist in Kurakhove.

“They start to forget things, and they keep silent and don’t say anything. We give them simple coping mechanisms, we reiterate their important role in the family and how they can do small things like talking to other people in the village to make themselves feel better.”

Anxiety affects more than half of MSF’s mental health patients. “Direct exposure to the conflict is one of the main reasons we see such high levels of anxiety,” says Dr. Das.

“The sense of hopelessness and uncertainty about the future contributes to this. Such stress can also contribute to exacerbating physical symptoms of other medical conditions. We often see this in patients with hypertension.

Despite being under treatment they can also suffer difficult breathing, palpitations and sleeping problems because of the emotional stress. It’s therefore crucial that medical services are offered alongside psychological care to reduce the risk to the patient’s physical and mental health.”

Misha Friedman
All MSF services are free, including medecine, a rarity in Ukraine.

Until October 2015, MSF was working on both sides of the frontline providing assistance in government and non-government held areas.

However, by October 2015, MSF’s authorisation to work in the self-proclaimed Lugansk and Donetsk People’s Republics (LPR and DPR) was withdrawn. Today, MSF teams are only able to work in areas controlled by the Ukrainian government.

“When our teams had to leave LPR and DPR, we left behind thousands of patients in need,” says Mark Walsh, Head of Mission for MSF in Ukraine.

“We are now especially concerned for those with illnesses such as diabetes, chronic kidney disease, cardiac disease and tuberculosis. In order to address the needs on both sides of this conflict, we still remain committed to resuming our activities in DPR and LPR when it is possible.”

MSF's work to date in the region

In 2014, MSF donated medicines and medical equipment to more than 350 health facilities on both sides of the frontline, enabling over 9,900 patients with conflict-related injuries, more than 61,000 with chronic diseases to be treated, and 5,100 women to have assisted deliveries.

Teams also carried out around 159,900 basic healthcare consultations and 12,000 mental health consultations in cooperation with the Ministry of Health.

MSF teams also run first aid and water points to assist people waiting in long queues in the summer heat who want to cross the frontline at the Novotroitske, Zaitseve and Mayorsk checkpoints.

Conclusion of activities in Bakhmut area

After two years of providing much needed medical and humanitarian assistance to people affected by the conflict in Bakhmut and surrounding areas, MSF will conclude its activities by the end of July 2016.

Several of MSF’s activities in that location will be handed over to other NGOs, together with equipment and supplies to continue providing assistance for the coming few months.