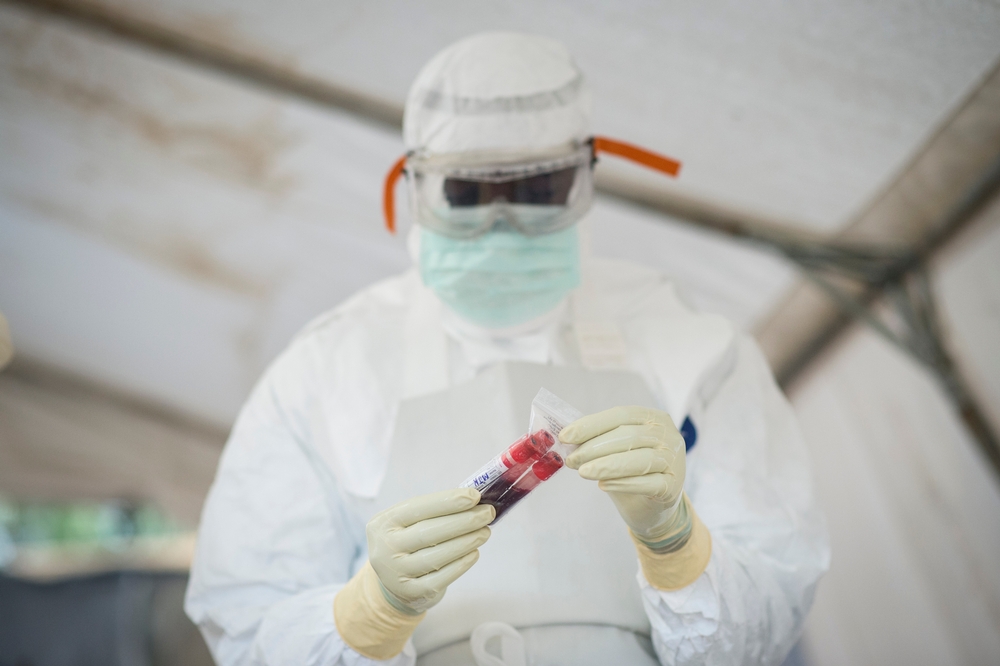 Ebola: Treatments and vaccines could help bring outbreak under control

Dr. Bertrand Draguez is MSF’s Medical Director currently working on the West Africa Ebola outbreak. Here he explains why developing vaccines and treatments for Ebola is  important, what is needed in order for them to make an impact in this outbreak, and why MSF is taking exceptional measures in facilitating clinical trials for potential treatments.

What is MSF currently doing on experimental treatments and vaccines?

MSF will work in collaboration with organisations, academics, companies, the Ministries of Health in the affected countries and the WHO in order to implement fast-tracked clinical trials for some of the new treatments for Ebola at existing treatment sites.

Experimental treatments are currently being selected and trial designs are being developed to ensure that disruption to patient care is minimal, that medical and research ethics are respected, and that sound scientific data is produced. MSF does not usually engage in research and trials for drug development, but faced with this massive outbreak, we’re taking exceptional measures.

As regards potential vaccines, MSF isn’t involved in clinical trials at present, as such trials would be carried out on healthy populations outside treatment facilities.

MSF is fully supportive of efforts to accelerate the development of both vaccines and treatments for Ebola alongside their use in compassionate circumstances.  We’re also lobbying for companies to scale up production of these products as soon as possible.

What kinds of vaccines and treatments are currently in the pipeline?

April 2014: A lab assistant in Guinea with blood samples taken from a suspected Ebola patient

The two most promising candidate vaccines have been identified as one developed by GlaxoSmithKline (GSK) and a second developed at the Public Health Agency of Canada in Winnipeg. There are other vaccines in development, however, and they should also be pushed through the pipeline as quickly as possible.

What about convalescent whole blood/plasma as a potential treatment for Ebola? Do you have a view on that?

Convalescent whole blood or plasma from survivors of Ebola contain neutralising antibodies that could be effective in combating the virus if given through transfusion to patients infected with the virus. This method is seen as attractive by some for a number of reasons: it could potentially be evaluated and implemented relatively rapidly; and as it is done by transfusion, can be used widely provided that the necessary human resources, facilities and equipment are present (though this can be challenging in settings like West Africa). However, it isn’t clear at the moment how effective it is. While not replacing the urgent need to find other suitable and effective treatments and vaccines for Ebola, convalescent plasma therapy must be investigated.

For the trial of an experimental treatment, what would this trial look like? How would it be designed?

For efficacy trials of experimental treatments in affected countries, there are a number of  design options that can be used. The key is that the trial designs deliver robust efficacy data quickly, while ensuring that they’re safe for the patients and that those who are most in need can access the product under investigation. Trials for treatments – as for vaccines – should not include a placebo: exposed and vulnerable people in Ebola-affected and low-resource settings shouldn’t be led to think they are either being treated or protected when they’re not.

What’s the status of the experimental treatment trials? When will one be made available to treat people?

A handful of experimental treatments are now ready to enter human trials, but there are a number of hurdles that need to be overcome before they can be used on a large scale.

First, those treatments need to be proved effective and safe through human trials. Trials on efficacy should be conducted inside affected countries in established Ebola treatment centres; this may represent a challenge as there is the need to ensure standard patient care will not be jeopardised and experimental products and their study will not cause harm to the patients.

Second, those treatments need to be made available in sufficient quantities to be administered to all the patients in need. If they are not, Ministries of Health will be faced with tough decisions in rationing them.

There’s still some way to go, but there are a number of means by which these processes can be sped up. Trials should be accelerated as much as possible, including through overlapping phases and ensuring there is seamless transition between different trial phases and scale up after safety and efficacy is demonstrated.

As regards vaccines, when is the soonest one might be available? How soon could a vaccine be used on a large scale in the field?

July 2014: At MSF's Ebola Treatment Centre in Kailahun, Sierra Leone technician from the Public Health Agency of Canada is testing a patient's blood sample for Ebola.

There are two vaccines entering human clinical trials now and, in theory, a vaccine could be used on people in the affected countries immediately after safety and efficacy is determined.  But in practice, how soon this will be depends on action taken now. If mass production of a vaccine starts only after the results of the efficacy study come out, we could be waiting months for that product to be available in sufficiently large quantities. In MSF’s view, production should begin even before end results on efficacy come out, so that people who are at risk can receive and benefit from these vaccines as soon as their efficacy and safety has been proved.

Of course doing so represents a possible risk to developers, as they may end up having to scrap the product. But they need to take the risk of manufacturing in large quantities before efficacy is confirmed. Actors like individual states and the WHO need to find a solution to cover the risks, in case the product was found not to be safe and effective in trials.

How important are vaccines and treatments to stopping this epidemic?

What is needed most urgently in this outbreak is more beds for sick people, more staff to treat them, more efforts to ensure contacts of patients are being monitored, and more health promotion to reduce transmission of the disease in the countries affected. Coupled with these efforts, vaccination of frontline health workers – who are among the most vulnerable people – and mass campaigns to vaccinate large numbers of people in affected and at-risk countries could make a huge difference in curbing this outbreak. What we are seeing in West Africa today is a disaster scenario, and all actors – pharmaceutical companies as well as states – should be doing everything they can to speed up the response.

Read more about the Ebola outbreak