In recent weeks, tens of thousands of displaced people have arrived in cities in the conflict-hit region of Tigray, northern Ethiopia. They join others who arrived earlier and are staying in schools and empty buildings, in poor conditions and without basic services. Many have already been displaced multiple times since November.

Schools are the epicentres of a huge displacement crisis

The roof of the five-storey building of Tsegay Berhe school in the city of Adwa is open to the blue, cloudless sky.

During the first days of the conflict in this northern Ethiopian region, the building was hit by a number of rockets. Two of the classrooms are littered with the smashed remains of computers, monitors, chairs and books.

The remaining classrooms were untouched, but often the wooden benches have been stacked in corners or taken outside, while chalked fragments of lessons are still visible on the blackboards.

At the gate of the school there is plenty of action and hundreds of voices create a wall of noise. 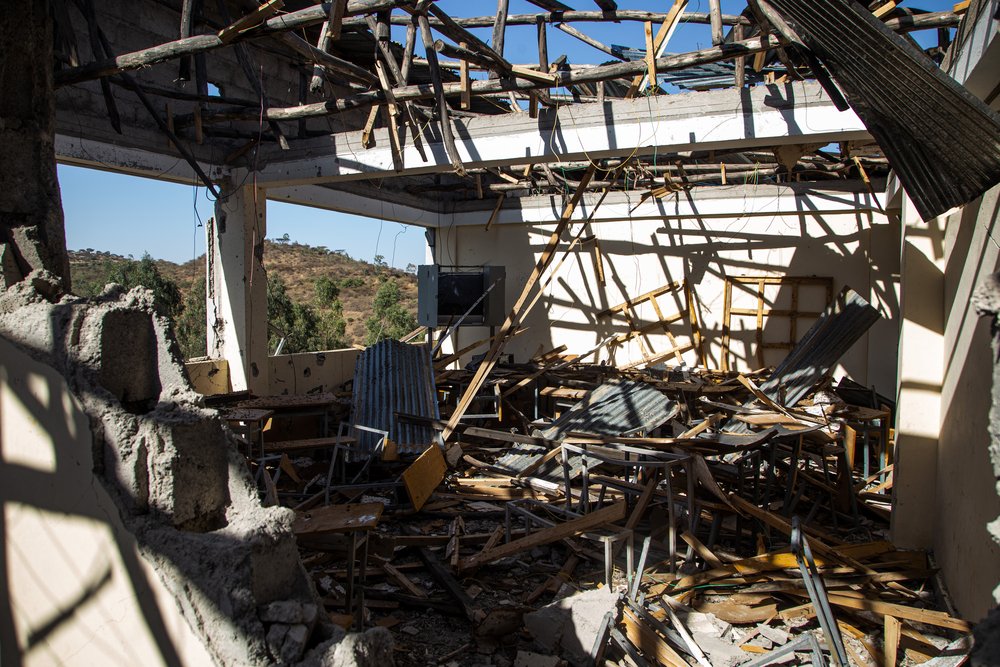 Igor Barbero/MSF
A destroyed classroom at Tsegay Berhe school in Adwa, central Tigray. The school was hit by rockets at the start of the conflict in this northern Ethiopian region.

A group of administrators are busy registering names in big notebooks, but they are not the names of students. School is off until further notice. 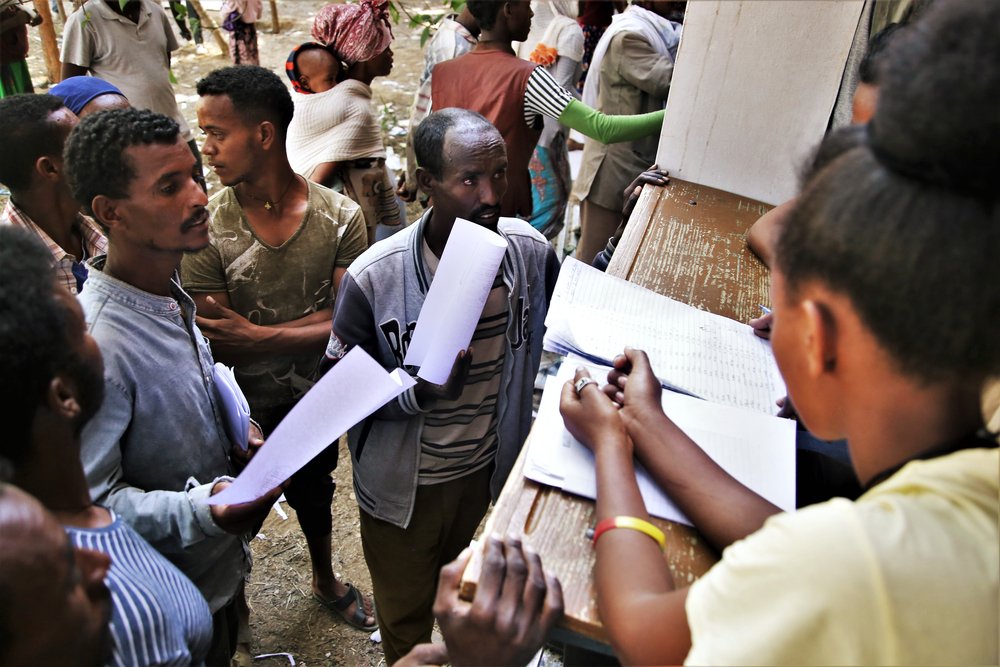 Today, primary and secondary schools in towns and cities across the entire Tigray region, such as Adwa, Axum and Shire, are the epicentre of a huge displacement crisis, numbering hundreds of thousands – although no one knows the real number. 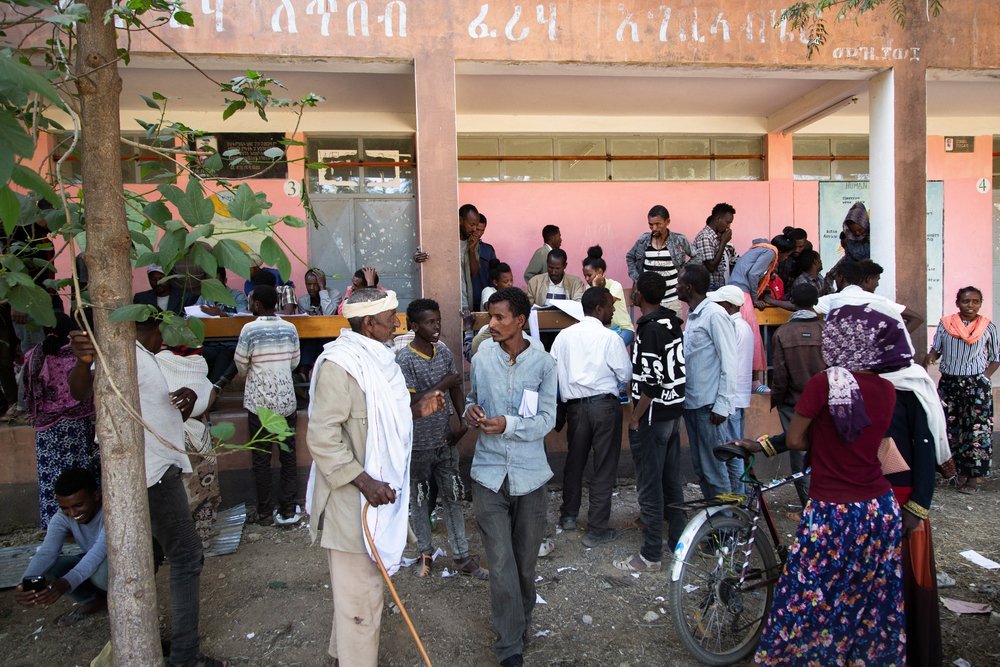 In recent weeks, this crisis has taken on a desperate shape, with tens of thousands of people moving into cities in search of safety and humanitarian assistance as resources become depleted in host communities and the more remote rural areas.

Ken Alew Gebrekristos, 38, a metal welder from the central Tigrayan town of Edaga Arbi, about 50 km southeast of Adwa, arrived here in the second week of March. 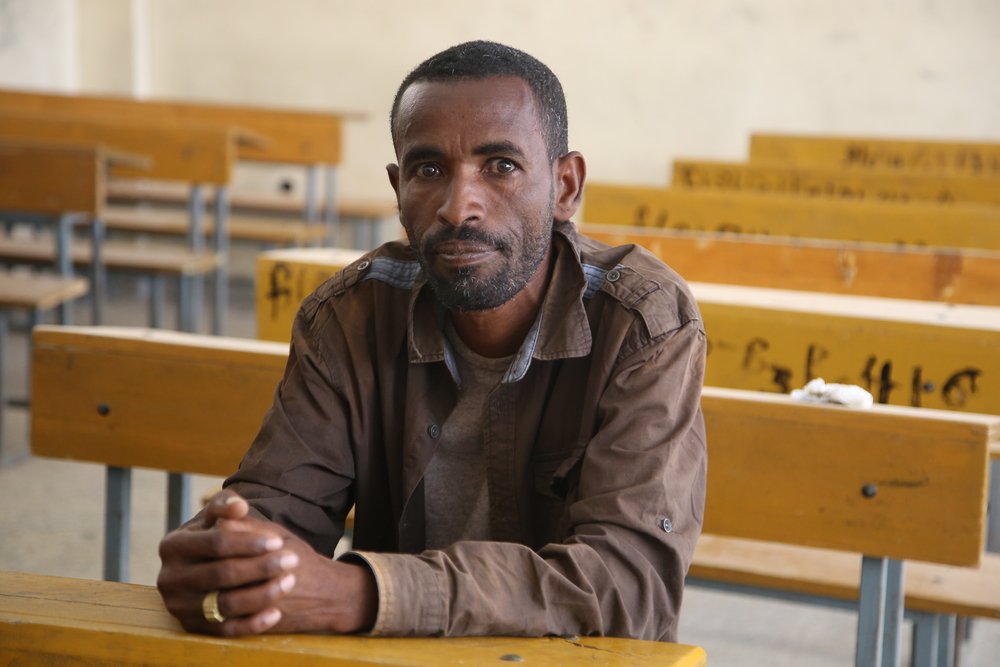 Igor Barbero/MSF
Ken Alew Gebrekristos, 38, is a metal welder from Edaga Arbi and father of four. He has taken refuge in the city of Adwa, in central Tigray.

During the day, his wife and two older children go into town in search of aid, while he remains in the school, listening out for any new information that could improve their situation.

“So far we have been given some injera (flatbreads) and T-shirts,” he says. During the night, they sleep on the hard floor of one of the classrooms. 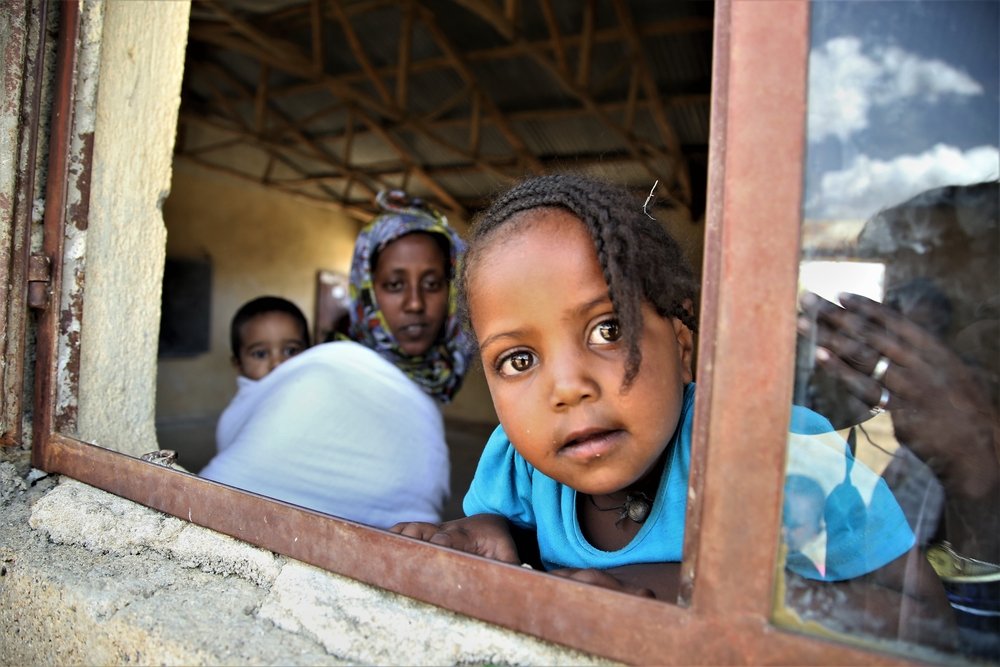 Igor Barbero/MSF
A displaced woman and her children stand at Abdimalaha school, Adwa, a town in central Tigray.

Adwa is just the most recent destination for this family of six. In the early days of the crisis, they saw their home town filling up with people fleeing violence elsewhere and later witnessed it being attacked by Eritrean soldiers.

In November, the family was forced to flee into the hills, taking nothing but their clothes and carrying the youngest children on their shoulders.

On the way, they passed dead bodies on the ground.

They kept on walking, asking locals along the way for shelter and food. 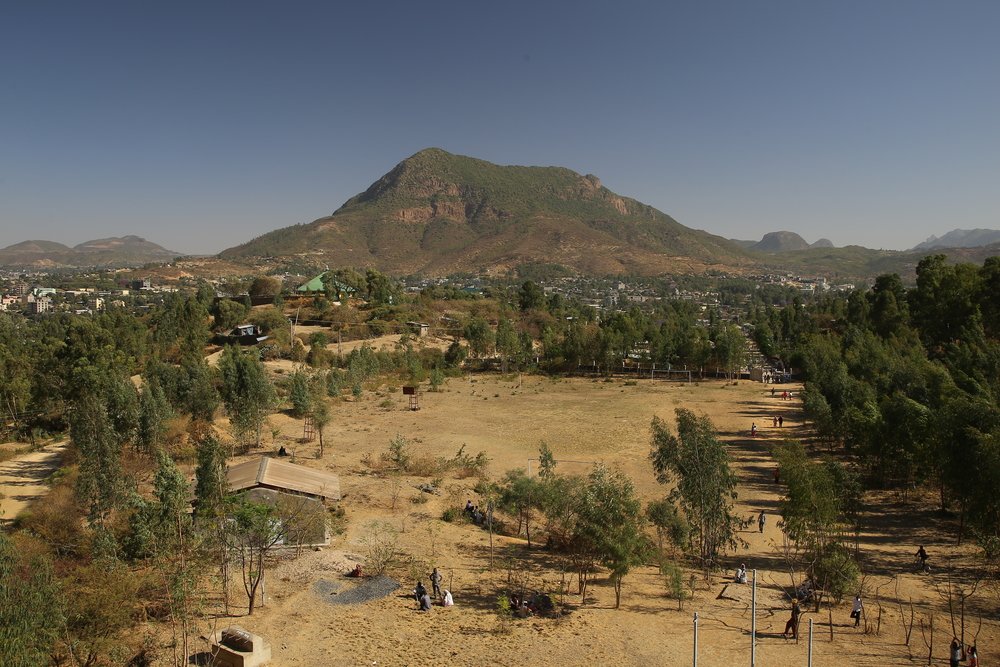 “We fetched water from the river to drink,” says Ken. “Some days we ate nothing. One girl who was displaced with us gave birth, with no doctor around. We had just a bedsheet to offer them, so we made a fire to warm up the baby.”

They attempted to return to their destroyed home, but the feeling of insecurity deterred them from staying there.

With tears in his eyes and his voice breaking, Ken says: “Now I have no plans, no idea what my immediate future looks like. I can’t go back home – how could I go back without guarantees? I feel safer here surrounded by other people.”

Sleeping on the ground

Most visible in Adwa’s schools are the women. Many have babies wrapped in long scarves on their backs, some kneel on the ground roasting coffee beans, others carry bundles of firewood.

Groups of men engage in heated discussion and youngsters sleep in the shade of small trees, taking refuge from the scorching sun of the dry season. 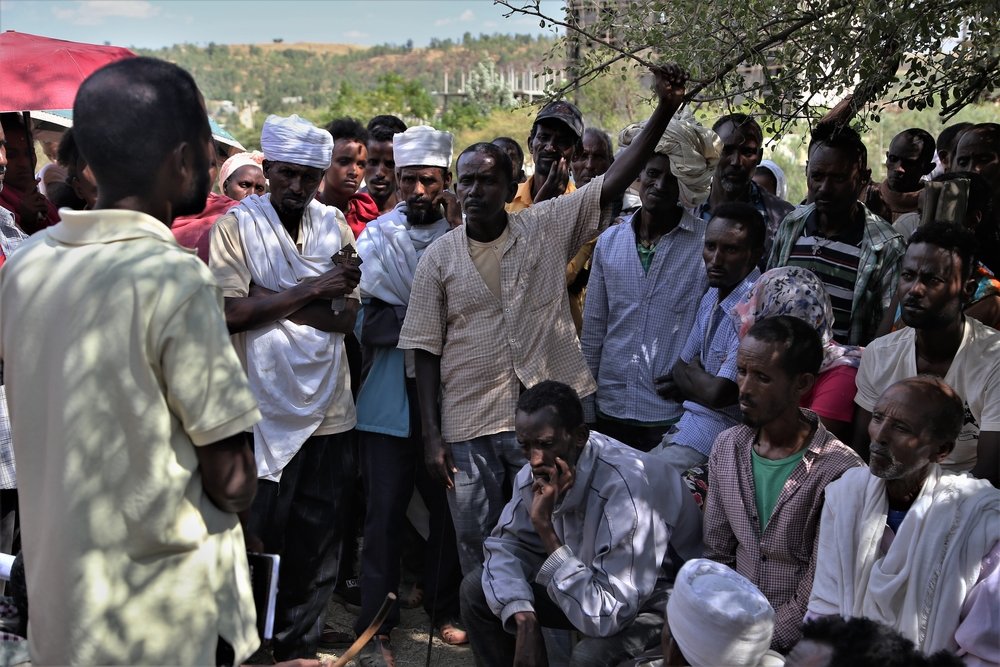 Igor Barbero/MSF
A group of displaced people engage in a discussion at Abdimalaha school in the city of Adwa, in central Tigray.

The rooms of the schools are sparsely furnished; most contain a few buckets, some bags of food and some plastic sheeting to sleep on.

At night, the rooms are filled with dozens of people crammed in next to each other on the floor. The unlucky ones sleep outside the building, on the grass or on pathways.

Time seems to have stood still. No one knows how long they will be here.

Nobody really expected something like this to happen. Even those who remember the border war between Ethiopia and Eritrea, which peaked in the late 1990s, can see no comparison with what is happening in Ethiopia today. 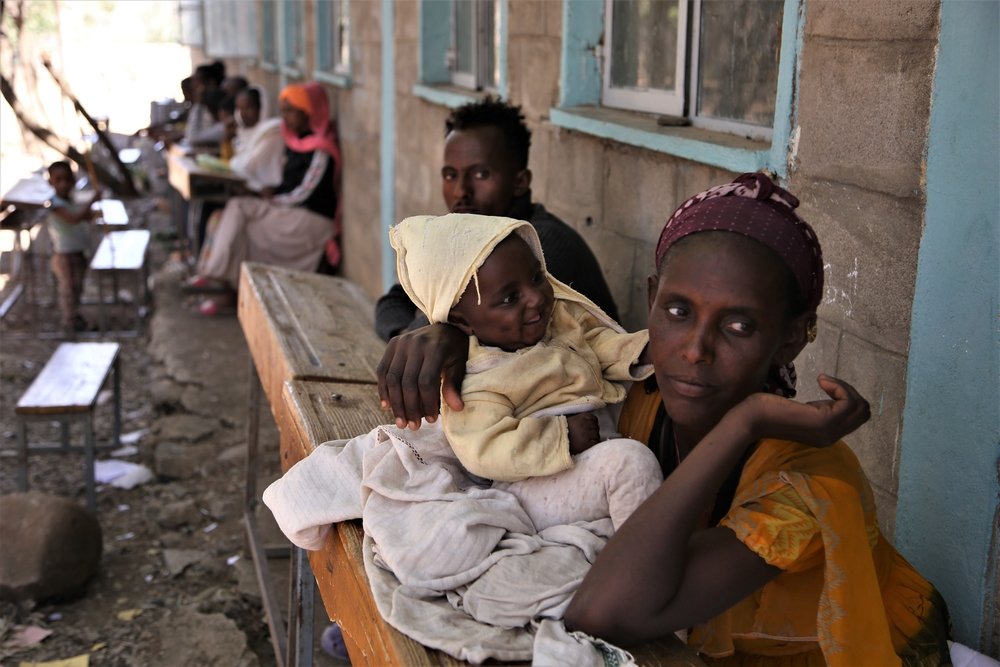 A 30-minute drive from Adwa is the historical university city of Axum. On the outskirts, surrounded by fields and construction sites in indefinite suspension, is the Basin school, the first destination for most new arrivals in the city since the conflict started.

People staying here say the movement of people is constant, but the influx has intensified since early March.

There are currently 12 sites in Axum like this one, together hosting several thousand displaced people. 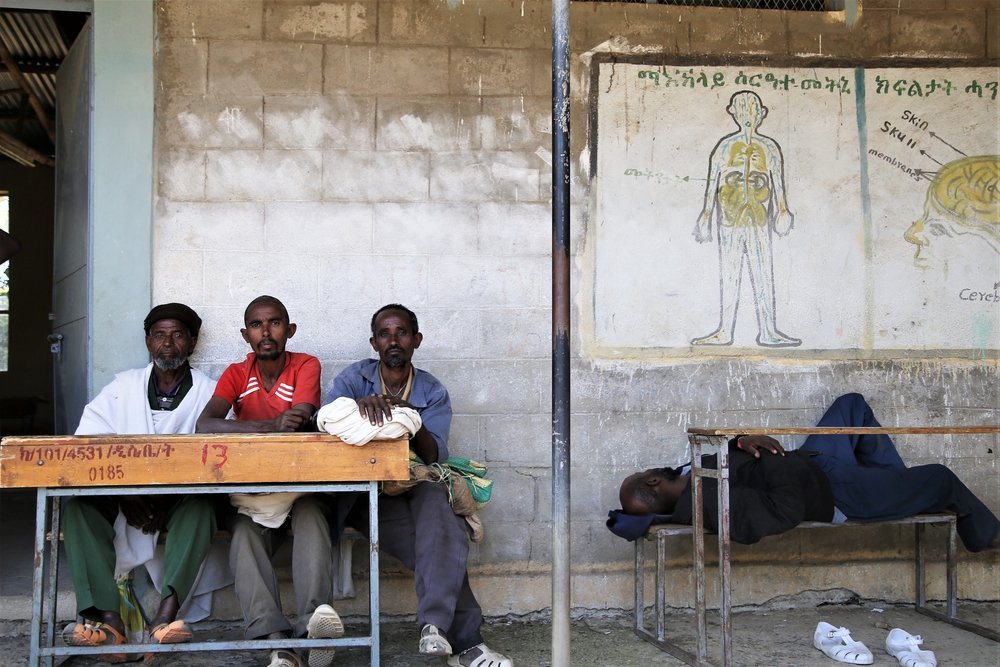 Igor Barbero/MSF
A group of displaced men sit at a bench at Kundeya school in Axum, central Tigray.

Like many other women here, Bayesh does not know the whereabouts of her husband and has had no contact with him for some months, with some of them likely being refugees now in Sudan. 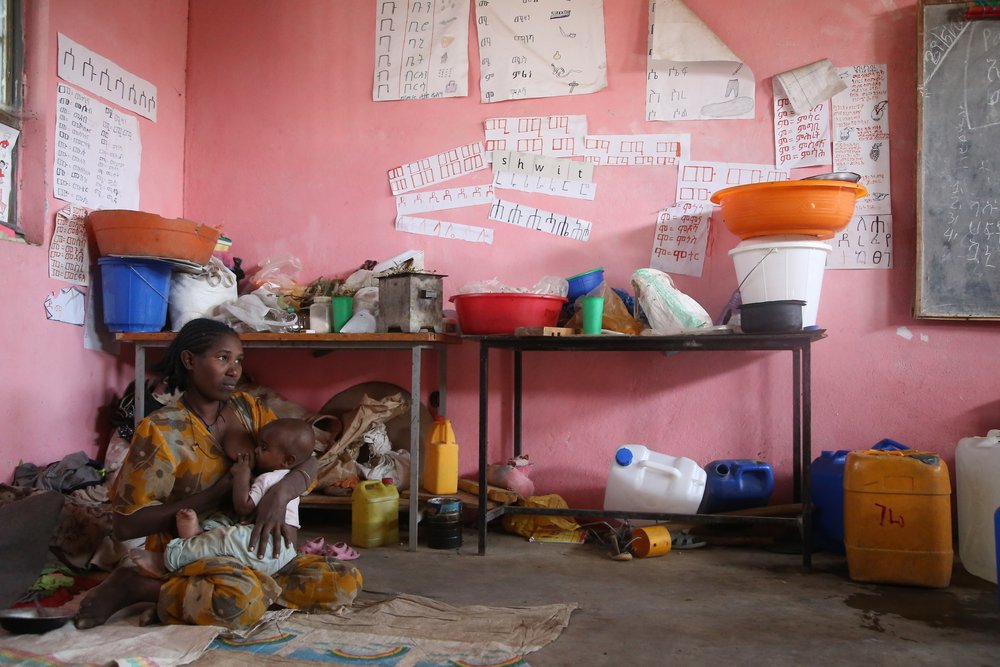 Igor Barbero/MSF
Bayesh Danyo, 25, is from Humera but is now staying at Basin school in the city of Axum, central Tigray, where thousands of displaced people have arrived in recent weeks after fleeing the conflict in this northern Ethiopian region.

She has received some food assistance but is concerned that her supplies are running out.

“At the beginning I got five litres of cooking oil, 30 kg of flour and 50 kg of wheat. These are all about to run out. The few food distributions that happen are not always fair. I try to share whatever I have with other newcomers, particularly pregnant women.” 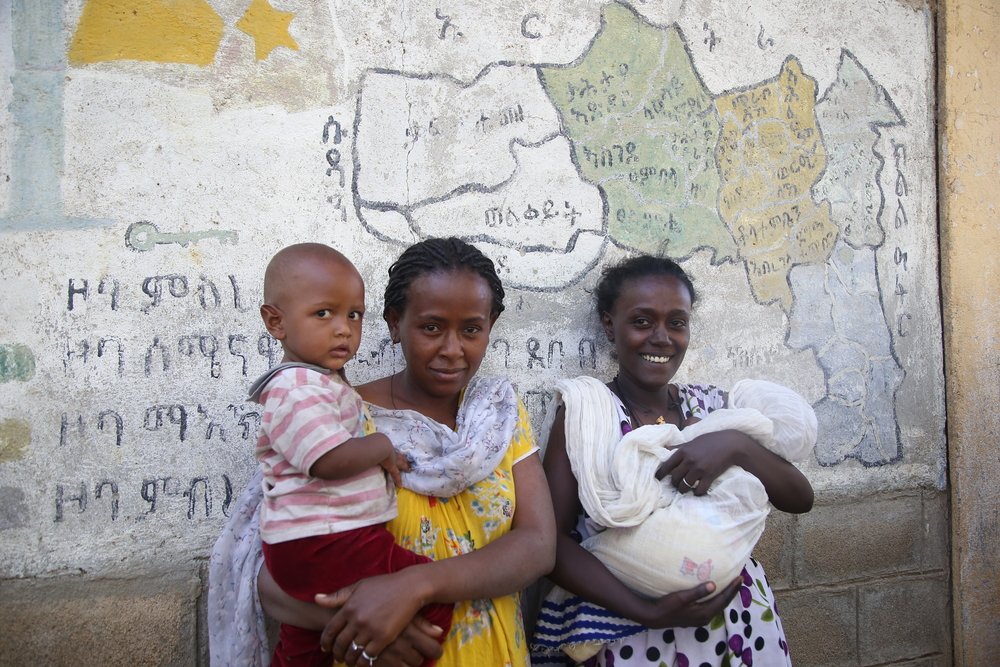 Igor Barbero/MSF
Sesel Gorohat, from Sheraro, with her two-year-old daughter, and Salam, from Humera, with her four-month-old baby, stand in front of a map of the Tigray region at the Basin school in Axum.

She adds that the little water they get is mostly used for drinking, with the children always coming first. “We haven’t really had a chance to wash ourselves since we arrived,” says Bayesh.

“My baby gets sick because of the harsh conditions in which we sleep.” 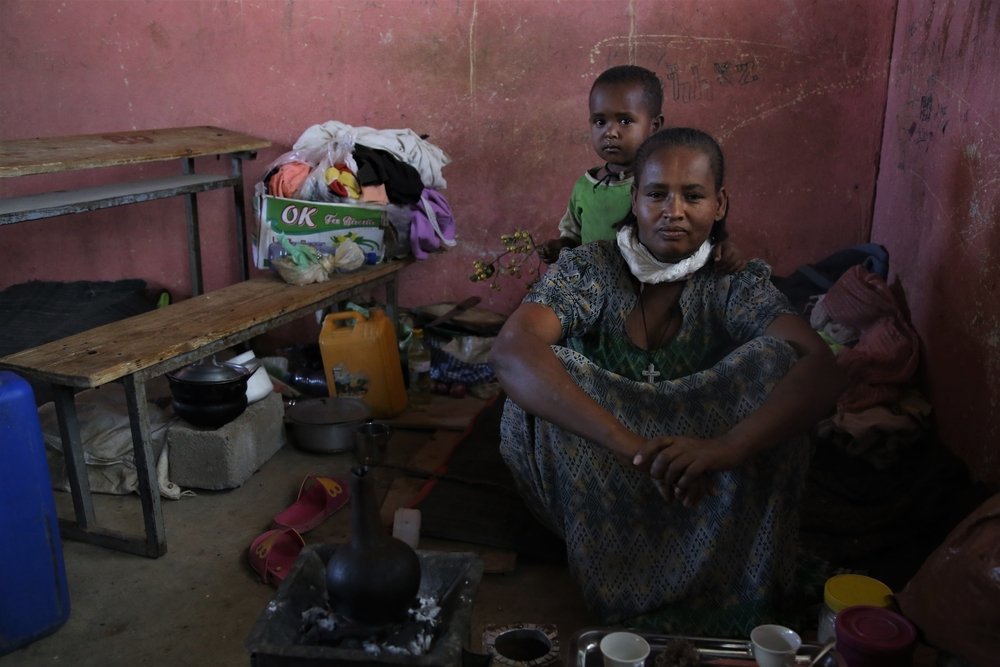 Igor Barbero/MSF
Bereha Abebe, from Humera, with her two-year-old child, prepares coffee at the Basin school, currently used as an informal settlement for displaced people in the city of Axum, in central Tigray.

Bayesh comes from Humera, in western Tigray, a town at the junction of Ethiopia, Eritrea and Sudan. Many of the displaced people in central and eastern areas of Tigray come from the west.

Inhabitants of towns including Humera, Dansha and Mai Kadra claim to have been pressurised by militias and armed groups to leave their hometowns and sometimes to have been forcibly put into buses which dropped them on the far side of the Tekeze river. 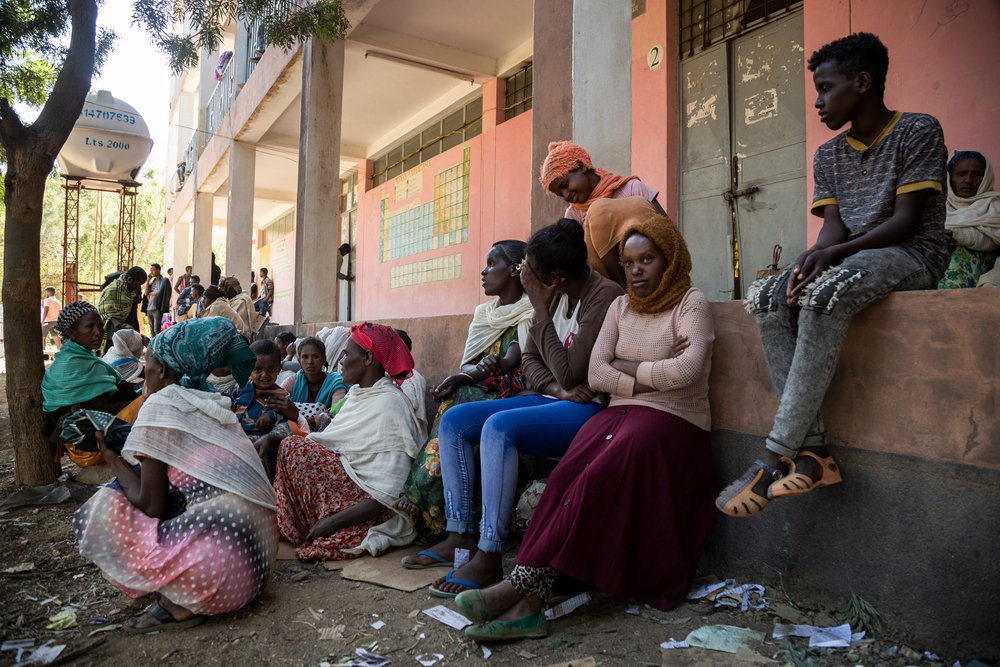 Others say that they experienced and witnessed violence of various types which made the decision to leave unavoidable.

While displacement routes vary and go in multiple directions, depending on family links or the ability to afford transport, Shire is often the first main town approached by people fleeing western Tigray.

But Shire has very high numbers of displaced people and is becoming increasingly crowded, so many people are opting to continue their journeys. 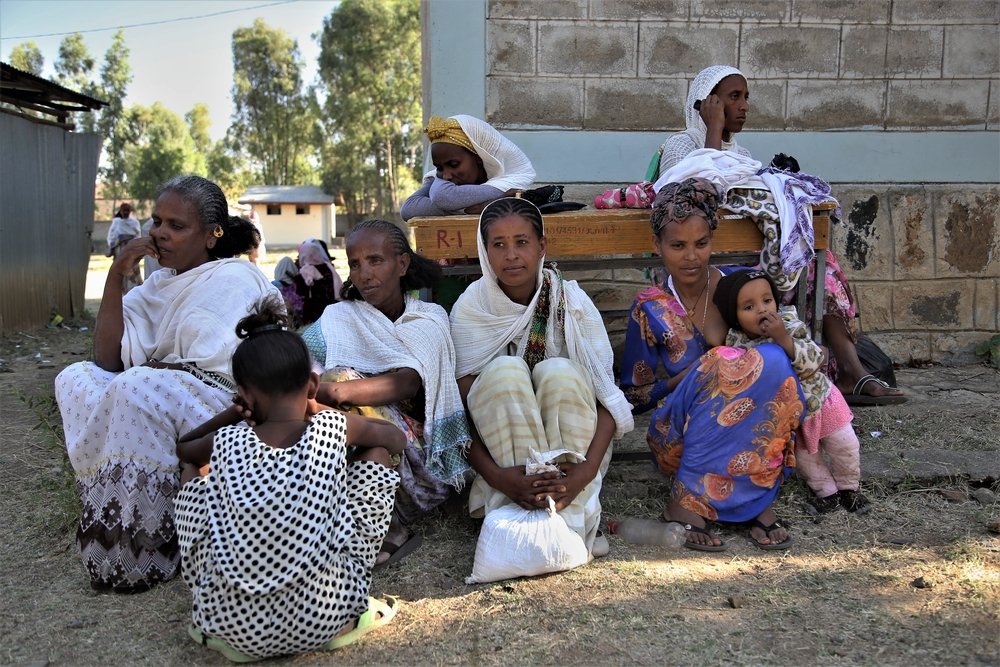 Igor Barbero/MSF
Displaced women pass the time at Kundeya school, in the city of Axum, where they have taken refuge from the conflict in the northern Ethiopian region of Tigray.

“We have seen displacement happening since the beginning of the crisis, but people were not displacing in such big numbers and those who had to leave their houses were often supported by host communities, staying mostly in the houses of relatives or of people they knew and sharing resources with them,” says Esperanza Santos, MSF emergency coordinator in Tigray. 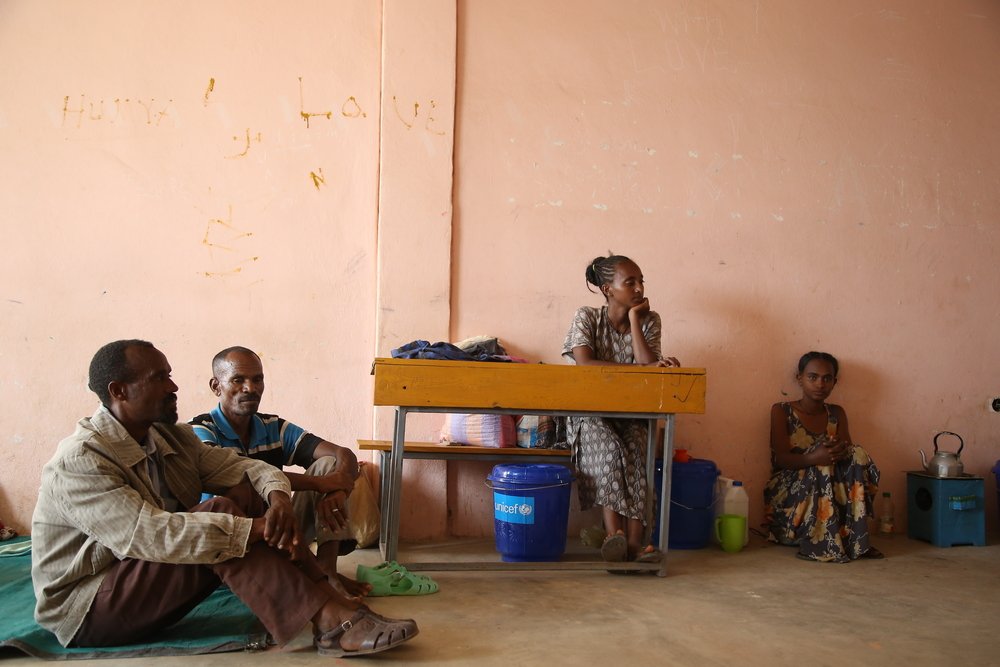 Igor Barbero/MSF
A classroom at the preparatory school in Abi Adi, a town in central Tigray. Schools have become informal settlements for displaced people fleeing the conflict in this northern region of Ethiopia.

“Recently this has changed and we are seeing a bigger influx of people, especially in Shire, Adwa and Axum,” says Esperanza.

"It is an extremely concerning situation because we are not seeing an adequate response from the humanitarian community to address people’s need for water, sanitation, food or medical services.”

Displaced people are also arriving in smaller towns such as Abi Adi, a two-hour drive west of Mekele, Tigray’s capital, located in an area where fighting has been frequent and where some pockets are held by the armed opposition. 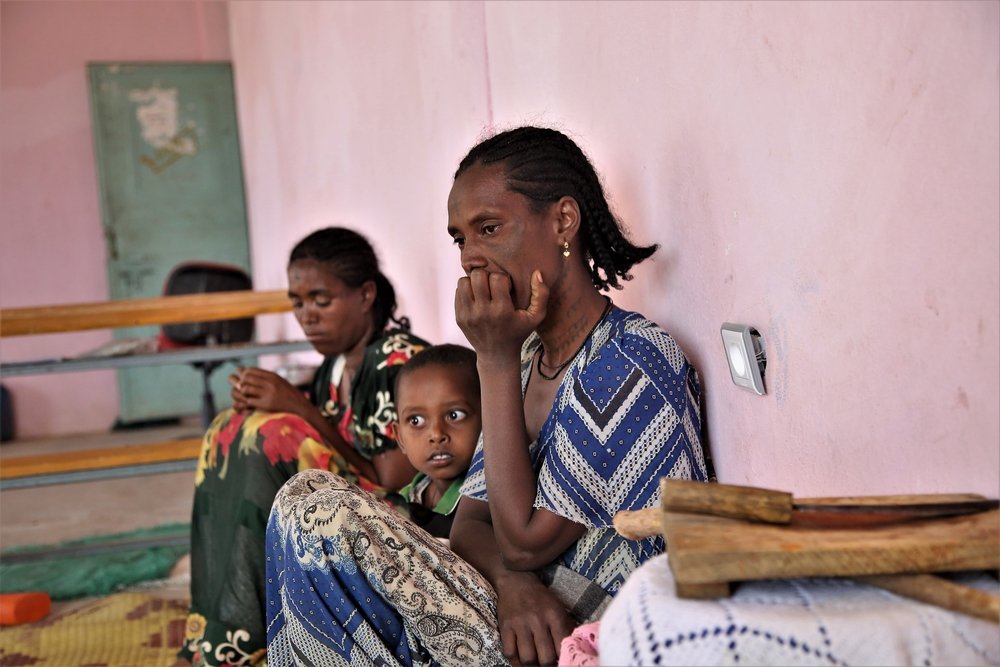 Igor Barbero/MSF
Wagiha, from Humera, sits with her children at the preparatory school in Abi Adi, a town in central Tigray.

Worku, 22, who owned a small clothes shop in Shire, arrived in Abi Adi on 1 March.

In November he moved from one area to another in western Tigray but, as a young male, he felt unsafe and decided to approach a distant relative living in a village not far from Abi Adi. He had also heard that aid was available in the town.

“I finally came to Abi Adi because there is more presence of humanitarian organisations,” he says.

“Over the past few months, I had to beg from local people. At the most, I received an injera each day. I need food, clothes, water, shelter... Everywhere I’ve been, I’ve been sleeping on the ground. Health-wise I am still fine, but I have seen others get sick on the way and die.”

Sitting nearby is Leterbrahn, a young woman who left Humera four months ago and now shares an 8-square-metre room at Abi Adi elementary school with nearly 20 other people, including her two small daughters.

Leterbrahn says she has lost almost everything she owned. 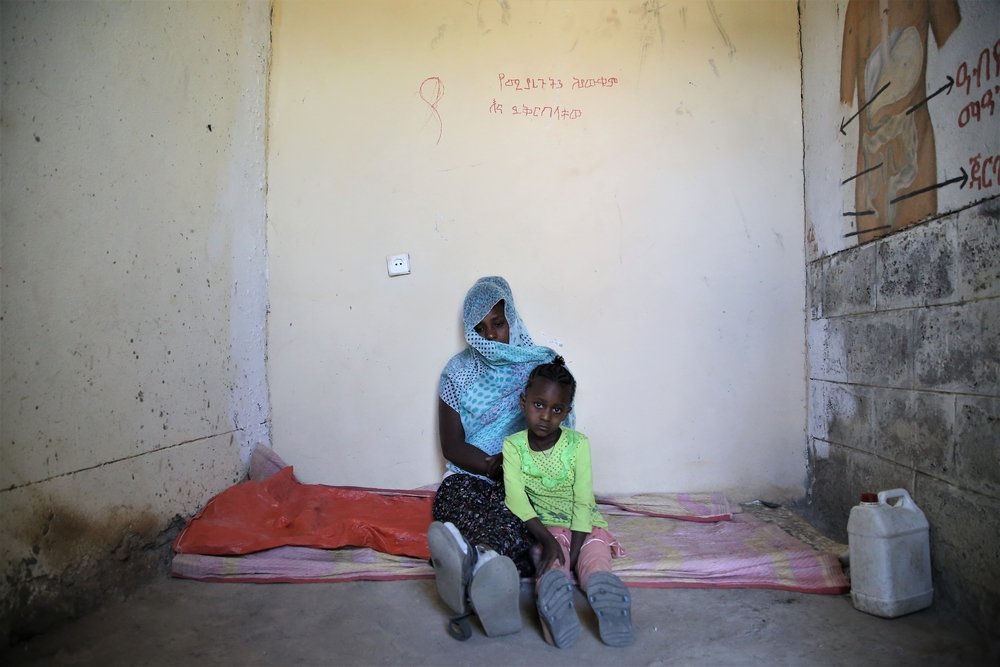 Igor Barbero/MSF
Leterbrhan lies with her five-year-old daughter in a small room where around 20 people sleep at the elementary school in Abi Adi, a town in central Tigray.

“I only have the clothes you see here,” she says.

“I can’t even cook for myself as I don’t have any utensils. I don’t even own a blanket. At one point I was given four bedsheets by local people, but I gave them to the pregnant women. We feel forgotten by the international community and the Ethiopian government. Nobody reaches us. Even after such a long time, we have nothing.”

MSF teams are rehabilitating a number of health facilities across the Tigray region and providing them with drugs and other medical supplies, as well as providing hands-on medical support in emergency rooms, maternity wards and outpatient departments. 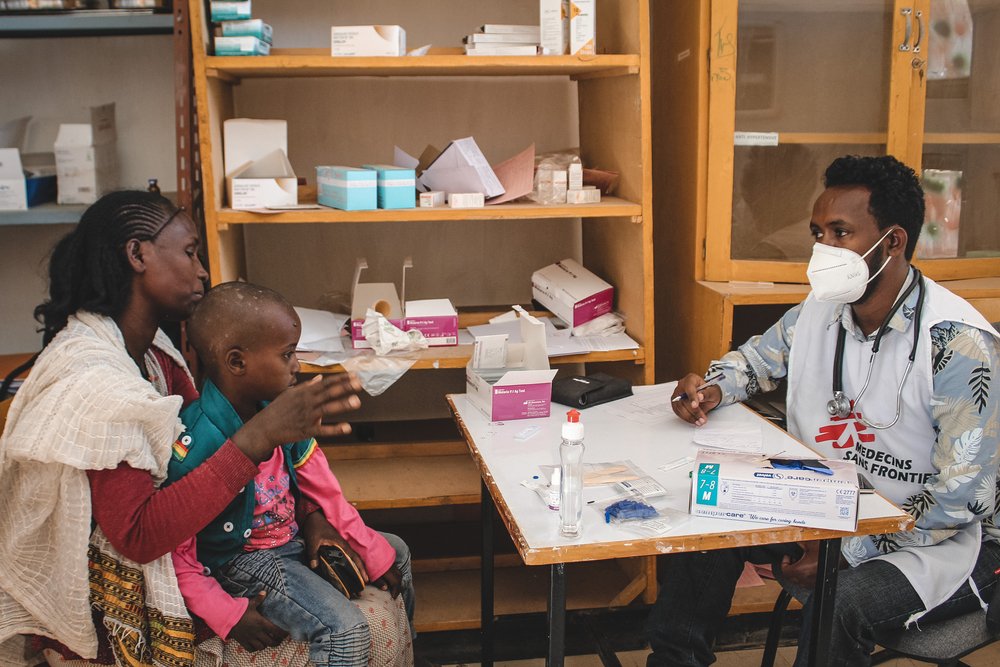 Claudia Blume/MSF
36-year old Ayana* has come to the MSF clinic with her 5-year old son.

MSF teams are also running mobile clinics in rural towns and villages where the health system is not functioning, and in informal sites where displaced people are staying.

However, there are still rural areas in Tigray that neither MSF, nor any other organisation, has been able to reach; MSF can only assume that people living in these areas are also without access to healthcare.

In response to this wave of newly arrived internally displaced people, MSF is also focusing on water and sanitation activities in some of the main towns.