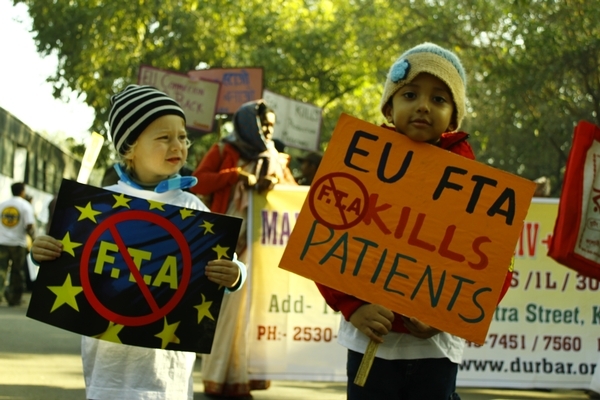 As European Commission (EC) pressure mounts on India to rush into signing a free trade agreement (FTA) by mid-April, activists from across Europe mobilised in Brussels today to demand the EC withdraw provisions that will harm people’s access to medicines in India and across the developing world.

Civil society organisations have learnt through leaked texts that the EC, in closed-door negotiations, is aggressively pushing for stronger industry control at the expense of public health, threatening millions of lives.

India: Pharmacy to the Developing World

"In the wake of several recent pro-public health decisions in India, the EU is now doubly keen to shut down India as the ‘pharmacy to the developing world’ and ensure the profits of its pharmaceutical companies are kept intact”, said Leïla Bodeux of Oxfam.

“Eighty per cent of medicines used to treat HIV in the developing world come from India, and if the EU succeeds in retaining the harmful provisions that remain in the agreement, it would cut off this lifeline supply for millions of people.”

Under pressure from public health groups, certain provisions damaging to access to medicines such as patent term extensions have been removed from the proposed deal.

However, the intellectual property (IP) enforcement and investment provisions are still seriously concerning, particularly as an early April deadline to sign the agreement is imminent.

“This attack on the health of the world’s poorest is seriously concerning, particularly as a deadline to sign the agreement draws ever nearer and could be days away”, said Carl Schlyter, MEP for the Green Party.

“The EC cannot claim it supports access to medicines and is concerned about the lives of people in developing countries, and in the same breath be pushing harsh provisions around intellectual property enforcement on India.

I’m urging the European parliament: don’t accept the provisions that will impact so many lives before you sign on the dotted line.”

"Some FTA harmful provisions are similar to ACTA, an anti-counterfeiting deal which was killed off thanks to intense public scrutiny,"  said Lotti Rutter from the Stop AIDS Campaign.  "But now they are back: this is the issue that just never dies,”

Siddharth Singh
Enforcement provisions could potentially block the production and export of generic medicines from India – a lifeline for millions of people across the developing world and open the door to abusive practices from multinational corporations, by allowing medicines to be delayed, seized, detained and destroyed.

Measures on investment could see the Indian government – as well as third parties like treatment providers such as MSF - sued by multinational companies for billions of dollars in private arbitration panels if national laws, policies, court decisions or other actions are perceived to interfere with their investments – for example, if an Indian patent office rejects or overrides a patent on a medicine to increase access.

“As treatment providers, we are alarmed about the impact of these measures if they go through.

Not only will they put another nail in the coffin of access to the affordable, quality medicines MSF relies on to treat patients across the world, but we could be at-risk of being embroiled in disputes for simply using generic medicines. Europe should drop all demands that threaten public health in all their trade negotiations,” said Katy Athersuch, MSF Access Campaign.

This FTA is just the latest in a long line of negotiations by the EU to impose stricter IP provisions on developing countries; The EU is currently in FTA negotiations with India, ASEAN, Malaysia and Ukraine, and is planning negotiations with Thailand, Morocco, Tunisia and Egypt, among others.

"We are extremely worried; in our region, people living with HIV are benefitting from generic antiretroviral medicines imported from India”, said Othman Mellouk from the International Treatment Preparedness Coalition in the Middle East and North Africa.

“Such an agreement between India and Europe will have harmful consequences and prevent the access to essential medicines in our region, and we call on the European Commission to stop its trade policy that only benefits pharmaceutical companies and negatively affects people in developing countries".

The EU-India Free Trade Agreement has been in negotiations since 2007. From the outset, the European Commission has pushed to include provisions that would undermine India’s ability to produce affordable medicines on which millions of people in developing countries rely.

Harmful provisions in the EU-India FTA include:

‘Enforcement’ measures which could lead to generic medicines being prohibited from leaving India on their way to patients in other developing countries, on the mere allegation that a patent or trademark is being infringed. This could also embroil treatment providers in legal battles simply for providing generic medicines to patients.

The ‘investment’ part of the FTA would expand companies’ ability to sue the Indian government when it regulates health in the public interest, for example by overriding a drug patent to increase access to a medicine, or through drug price controls.

These disputes would be handled outside of domestic courts in secret settlement panels, with large sums in damages at stake. As a result of investment provisions in FTAs between other countries, several such disputes have already been filed by corporations against governments, in order to force a reversal of public health policies (e.g. Phillip Morris vs. Uruguay).  Companies claim such policies lead to so called “expropriation” of their investments and profits.