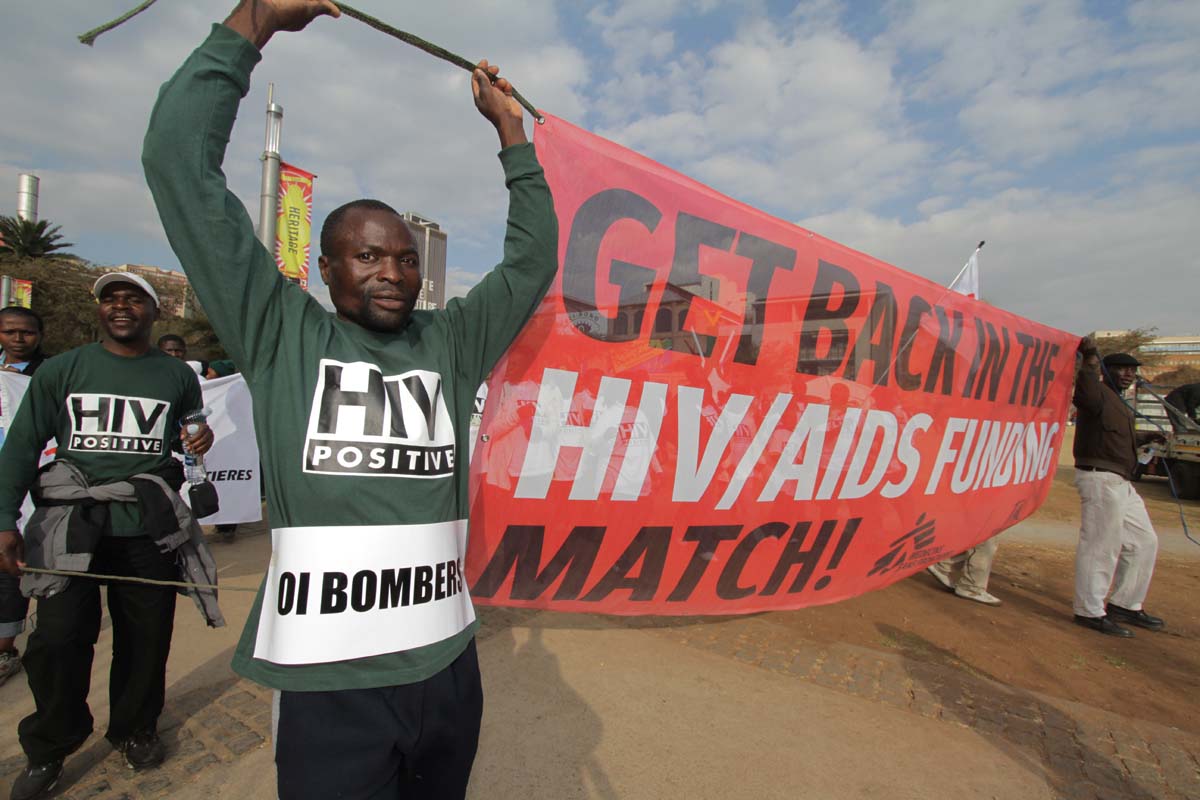 But when Médecins Sans Frontières / Doctors Without Borders (MSF) promised you an alternative take on football through the HALFTIME! initiative during the 2010 FIFA World Cup, that is perhaps exactly what was to be expected: unexpected success against the odds.

OI Bombers defender Cloud Mapiti holds a banner aloft during a celebratory march in Johannesburg to conclude the HALFTIME! tournament after the Bombers took the tournament title. HALFTIME! is an international initiative to raise awareness about the impact of dwindling commitments by international donors to fund HIV/AIDS.

HALFTIME! brought together six teams of people living with HIV from across Southern Africa to compete in a 5-a-side football tournament in Johannesburg, while similar football matches and events took place around the world. We did this to raise the alarm about waning funding for life-saving antiretroviral treatment needlessly risking millions of lives when international donors back out of financial commitments.

Unlike the other teams in the HALFTIME! tournament the OI Bombers (Opportunistic Infection* Bombers), only met for the first time as a full team in Harare, Zimbabwe just days before their departure to Johannesburg and entered the tournament as underdogs.

Not only did the Bombers have to overcome the fact that they come from two different towns more than 500km apart, where MSF operates HIV/AIDS treatment projects in Tsholotsho and Murambinda, but they were also divided by language. Three of the members are Shona speakers, while the other three speak Ndebele. But despite this the team quickly banded together, finding a common goal in their quest to remind the world the HIV crisis is not over and that international donors should stay in the HIV/AIDS funding match.

“Many people have been asking me about how I feel about coaching this team and whether we are going to win any games. But we are taking this game seriously. For us it will be an opportunity to raise the flag high by winning. Winning is anything that comes from doing our best and we will do our very best,” coach Munyaradzi Dodho told us.  On the eve of the tournament they told the other teams: “We are going to bomb you on the field like ARVs bomb opportunistic infections like TB.”

And on Friday 2 July when they took to the field against the other five teams from South Africa, Mozambique, Swaziland and Zimbabwe they proved their mettle and did just that. First they trounced Mozambique’s Mambinhas 2 – 0. In their next game they blasted their way to a massive victory 8 – 0 victory over South Africa’s Siyaphila when they unleashed their full arsenal, just as they had promised. The Bombers went from zeroes to heroes in an instant, becoming the team to beat and even surpassing the ARV Swallows – fellow Zimbabweans and early favourites to win HALFTIME!. By the time they met South Africa’s rough and ready Fluconazole Pirates in the final the Bombers were a force to be reckoned with.

The final came down to a penalty shoot-out and the Bombers clinched a 2 – 1 victory to take the tournament title and to become the top scoring team with a total of 12 goals – proving to the world and international HIV/AIDS treatment funders that halftime is NO TIME TO QUIT!

Taking the HALFTIME! title: Munyaradzi Dodho, coach of Zimbabwe’s Opportunistic Infection Bombers (OI Bombers) celebrates his side’s victory in the final match of the HALFTIME! tournament. The team was the top scoring side in the tournament, with 12 goals out of the total of 34 being off the boots of OI Bombers’ strikers.

“If the funding ceases, my life will be no more. These international funders should not retreat now. They should continue supporting us. And even African governments should chip in what they have, so those outsiders [international donors] can do more with their efforts to keep on funding,” OI Bombers defender, Cloud Mapiti says.

The all-star Brazil football squad entered the 2010 FIFA World Cup as early favourites to make it to the finals and hope to lift the golden trophy. And similarly in Médecins Sans Frontieres / Doctors Without Borders (MSF) upcoming HALFTIME! tournament in South Africa sees a strong Zimbabwean team as one of the top contenders to take home the title five days before the kick-off here in Newtown Park, Johannesburg on 2 July.

The ARV Swallows, an all female football team from the Epworth township near Harare are coming to South Africa with an impressive track record – they have won the HIV women’s league championship in their home country and are motivated to take victory in on Friday as well. HALFTIME! and the tournament featuring people living with HIV and MSF staff from four countries in Southern Africa in an effort to raise awareness on the continued battle for funding to fight HIV/AIDS. The tournament sees six football teams playing matches to raise the alarm about the ongoing HIV/AIDS emergency.

The ARV Swallows formed in 2009 when a group of HIV positive women, all seeking treatment at an MSF clinic in Epworth decided to form a football team to take on two stereotypes: that HIV is a death sentence and that women cannot play football.

This year, the ARV Swallows find themselves taking on a different challenge – to spread the message that the HIV/AIDS emergency is not over and HIV treatment funding needs to be secured. In order to do this they have had to make some changes. They have reduced the team from 11 to five players and they have had to draft a man into their ranks, their coach Jonas Kapakasa, as an additional member to meet the mixed gender requirement for teams to participate in HALFTIME!

And China is also going to play in this Zimbabwean team, too... A multinational team? No, no, no… “China” is the nickname of Janet Mpalume, the ARV Swallows’ star striker!

It has been Janet’s dream to play football abroad and this week her dream comes true when she and her team mates take to the HALFTIME! pitch in Johannesburg along with five other teams.

“We are training as hard as we can and I believe that we are going to beat the other teams. Playing soccer makes me feel like I am alive. It allows me to feel like I am valued and that I am seen amongst other people,” Janet says.

They clearly have the guts and determination, but will they be able to fend off challenges by countrymen the OI Bombers, Swaziland’s HIV Conquerors, Mozambique’s lightning fast Mambinhas, and the South African hopefuls, Siyaphila and Fluconazole Pirates?

We’ll have to wait and see if the ARV Swallows team will be victorious again. Visit the tournament in Johannesburg on Friday, or if you can’t make it find out more about the teams and the tournament here www.msf-halftime.info. For more information on ARV Swallows visit www.thepositiveladiessoccerclub.com

In Maputo, Mozambique’s capital, a field of 20 agile aspiring footballers from HIV programmes run by Medecins Sans Frontieres / Doctors Without Borders (MSF) did their best in recent weeks to impress selectors and secure their participation in the HALFTIME! five-a-side tournament in Johannesburg in neighbouring South Africa on this coming Friday.

But only six have earned the right to call themselves “Mambinhas”. These three men and two women have taken their inspiration from the lightning fast venomous tree-dwelling mamba snake from which the Mozambican national football squad, the Mambas, also derives its name.

Mambinha’s team captain, Joaquim Mutola, was diagnosed HIV positive in 2007. He says that MSF’s HALFTIME! is an opportunity to give a voice to people living with HIV in Southern African region, and should inspire those who are afraid to live openly with their of HIV positive status while reminding the world that the fight against HIV is not over.

“The main motivation is to show that HIV positive people can do what HIV negative people do in life thanks to ARV treatment,’’ says Joaquim.

Joaquim and the Mambinhas are ready to show the world what they can do. Every Saturday the Mambinhas meet to train together to improve their football skills because they want to win all the games during HALFTIME! when will play alongside five other teams from Southern Africa!

“All the players are very motivated and we aim to score three goals against HIV and AIDS in each game we play,” says Florência Tamele, Mambinha player and spokesperson. Florência was confirmed HIV positive in 2008. She has been married for 13 years.

“Joining HALFTIME! is our contribution to break the silence about HIV,” says Florência.

Joaquim says the team feel it’s a big responsibility to represent Mozambican people living with HIV through participating in HALFTIME!: “With this opportunity we will tell the world that Mozambique also suffers from HIV and AIDS and that more needs to be done to fight the epidemic.” - Abilio Cossa MSF Information, Education and Communication Officer Maputo, Mozambique

Post 5: Enjoying the World Cup thanks to a second chance at life in Swaziland.

"ARVs and TB drugs gave me a second chance at life, but it is a pity that my wife did not get this second chance"

Now in 2010, the Les Lions Indomptables and people living with HIV/AIDS (PLHWA) in Cameroon are facing new challenges again both on the field and in the treatment clinics.

Post 2: The  South African Samba, can you feel it?

"Even if Bafana Bafana do not win the title, they will have proved how much energy people in this country can dedicate to a cause"

Post 1: “Truly speaking, the little I know about morality, I learnt it on football pitches.”

Extra-Time! is an internet blogging experience with first-hand accounts and stories of field workers, staff and patients of the international humanitarian medical organisation Medecins Sans Frontieres (MSF), gathered and presented during the FIFA World Cup in South Africa, from June 7th to July 14th, 2010.

With Extra-Time! MSF aims to provide the worldwide audience with an alternate view on the first FIFA World Cup hosted in Africa and to chronicle the positive stories of perserverence in the Southern African region’s struggle to fight the dual epidemics of HIV/AIDS and tuberculosis.

In the coming weeks Extra-Time! will include narratives, photographs and short videos from countries where MSF field workers provide care to people living with HIV and tuberculosis including Malawi, South Africa, Swaziland, Zimbabwe, Mozambique and as well as other places in the world.

Information on HALF-TIME!, an MSF event in the form of one-day soccer tournament involving people living with HIV as well as MSF which will be hosted in Johannesburg, South Africa on July 2nd, will also be featured. HALF-TIME! is an initiative to raise awareness about the HIV/AIDS epidemic and the need to keep up international funding for antiretroviral treatment in developing countries.

The opinions expressed in the Extra-Time! blog are those of the authors or the persons interviewed and can not be considered or quoted as MSF’s official position on the matters concerned.