The father who faced the sea so his sons might go to school: A firsthand account from on board the MSF search and rescue vessel Geo Barents

23 November 2021, Central Mediterranean - Ali, 7 years old, rushes to hold his father’s hand as soon as the Médecins Sans Frontières (MSF) rescuers help him out of the lifeboat and onto the deck of the Geo Barents. Moustafa, Ali’s father, limps. I immediately think that it must be hard for him to stand after hours sitting in the same position in an overcrowded boat, and now with the Geo Barents swaying. But Ali helps him stand and holds him tight. When I reach them to help and put a thermal blanket around their shoulders, I notice some words written in pen in Arabic on Ali’s right arm. 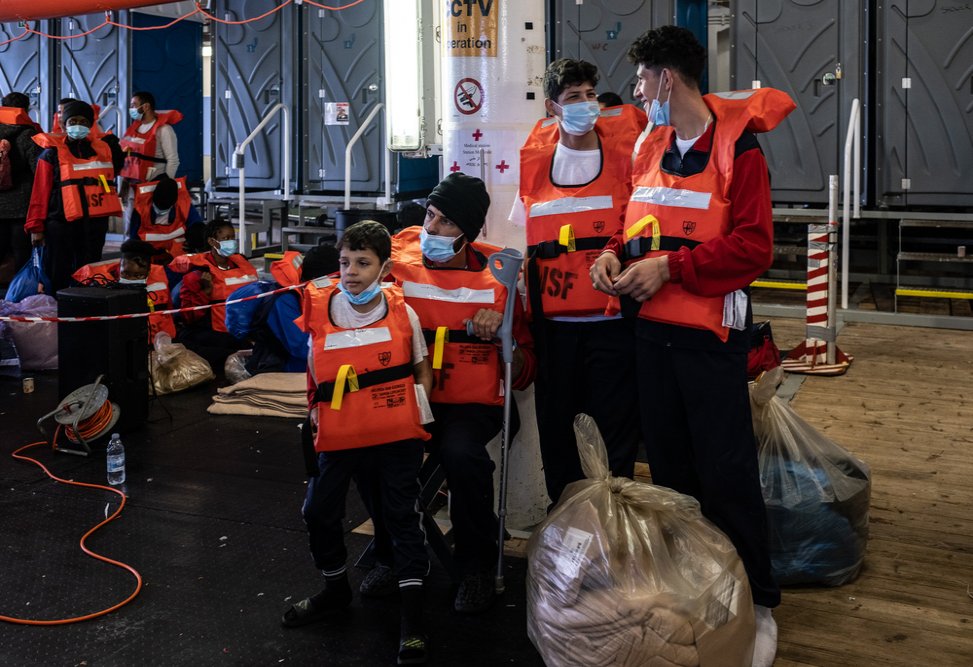 Virginie Nguyen Hoang
Moustafa and his three sons are ready for disembarkation. November 19, 2021. *Names were changed to protect their identity

“I feared I couldn’t make it, so I wrote on Ali’s arm the name of his mother and her contact. She is in Syria. I hoped that if something had happened to me on that boat, someone could have taken care of my son and could have informed her,” explains Moustafa. 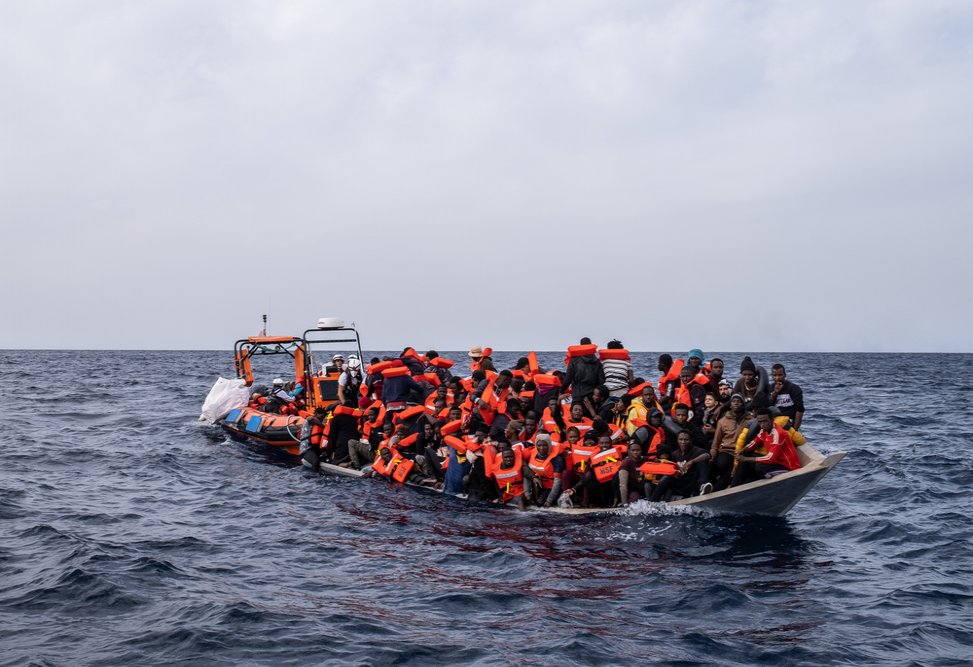 Virginie Nguyen Hoang
On November 16, 99 survivors were rescued by the Geo Barents at approx 30 miles from the Libyan shores. At the bottom of the overcrowded wooden boat, 10 people were found dead.

He tells me they left Libya the previous day, on the wooden boat from which they’ve just been rescued. “When I saw all the people who were coming on board [in Libya], I realised that it was too crowded."

"I was frightened, I wanted to get off the boat and I screamed to the smuggler to let us leave,” says Moustafa, while he scans the deck of the Geo Barents to check that all three sons are safely together on board. 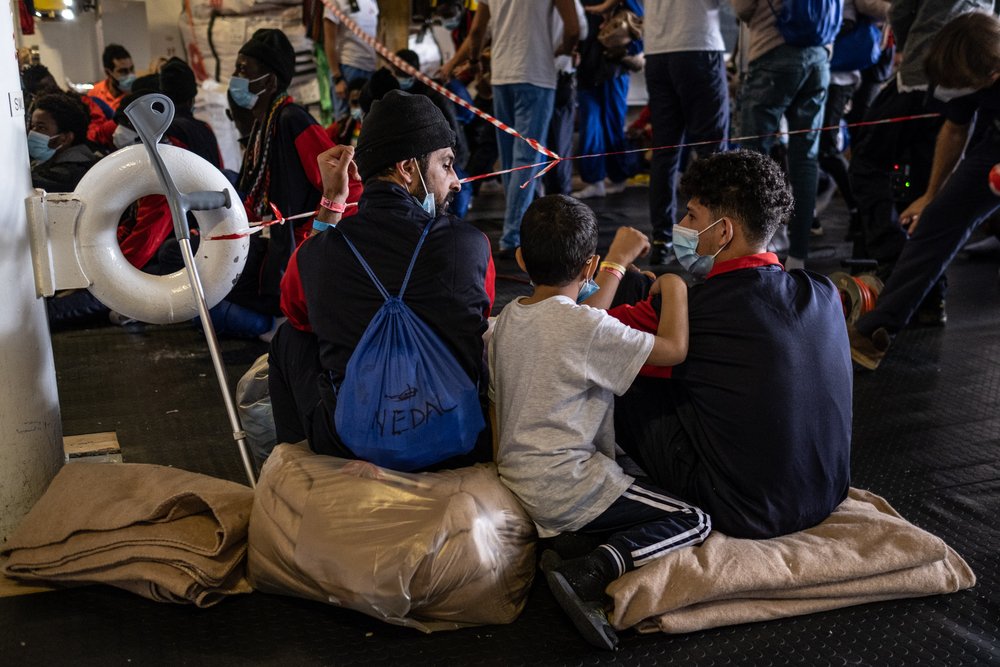 Virginie Nguyen Hoang
Moustafa and two of his sons are getting ready and waiting to disembark on November 19, 2021.

“It was too late, the man I paid to get on the boat yelled at me to stop and he threatened to kill my sons and me with his gun. We had no choice."

"We had no choice"

Moustafa and his three sons are among the 99 survivors rescued by the MSF team on the Geo Barents on 16 November, during a difficult search and rescue operation less than 30 nautical miles from the Libyan coast. 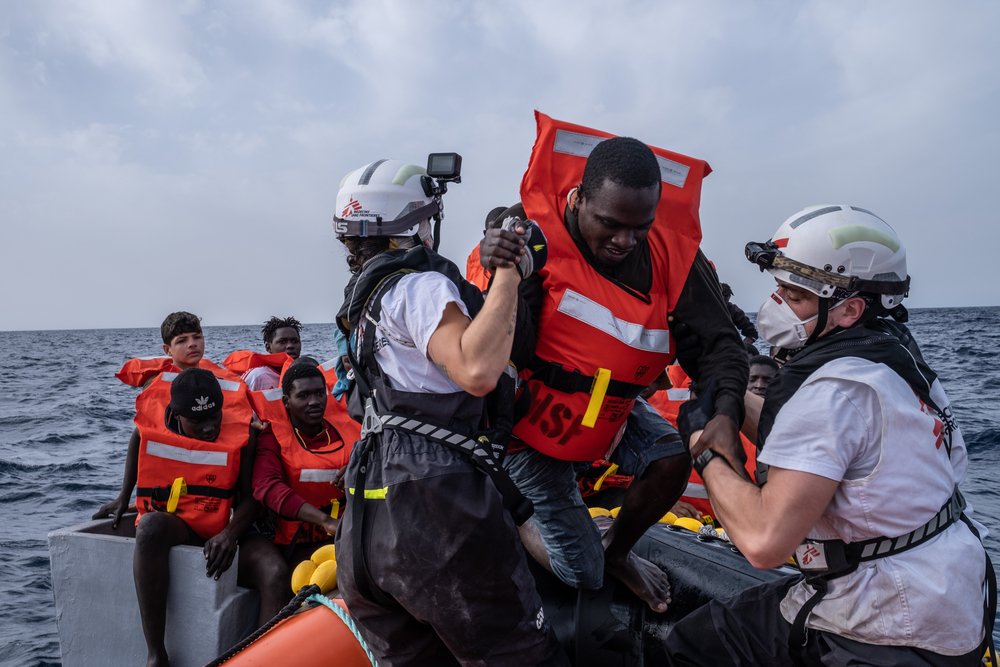 Virginie Nguyen Hoang
On the left side of the boat, Hassan, is waiting patiently to be transferred to MSF's RHIB.

The survivors recount that they left Zuwara, some 100 km from Tripoli on the Libyan shore, in the late evening of 15 November on a cramped wooden boat.

After a few miles at sea, the weather started deteriorating, the waves were becoming higher, and the engine stopped working. 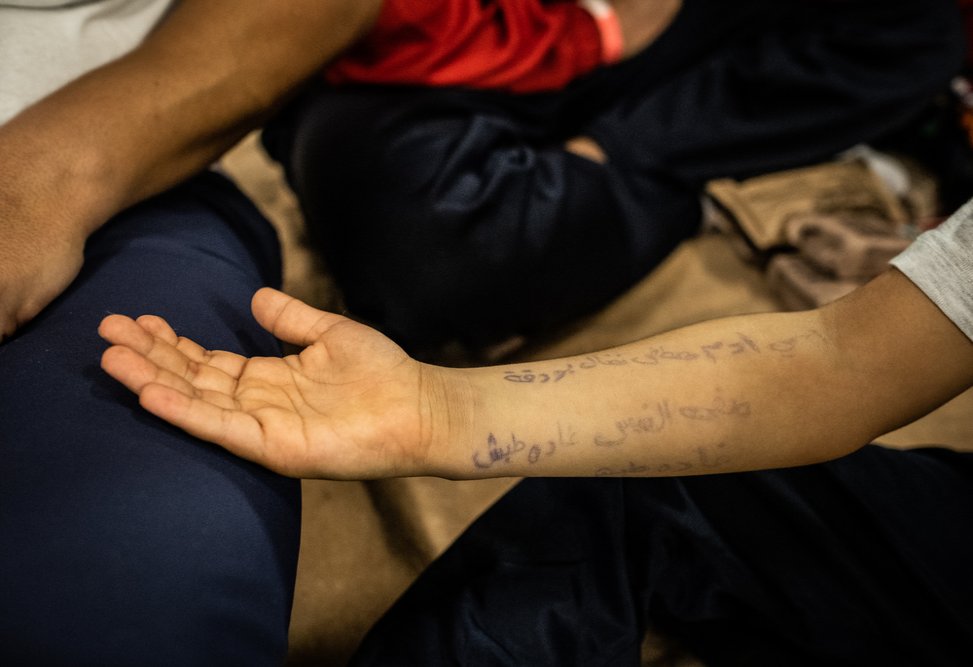 Virginie Nguyen Hoang
“I feared I couldn’t make it, so I wrote on Ali’s arm the name of his mother and her contact. She is in Syria. I hoped that if something had happened to me on that boat, someone could have taken care of my son and could have informed her,” explains Moustafa.

“People were panicking, we had women and children on board, they were all scared and crying; many were sobbing, screaming and moving on the boat out of despair."

"There was nothing I could do, just to pray to god for my sons to stay alive,” says Moustafa, keeping Ali, his youngest son, between his arms.

"There was nothing I could do, just to pray to god for my sons to stay alive”

The wooden boat, with 109 people including Moustafa and his sons, had left Zuwara on the night of 15 November. 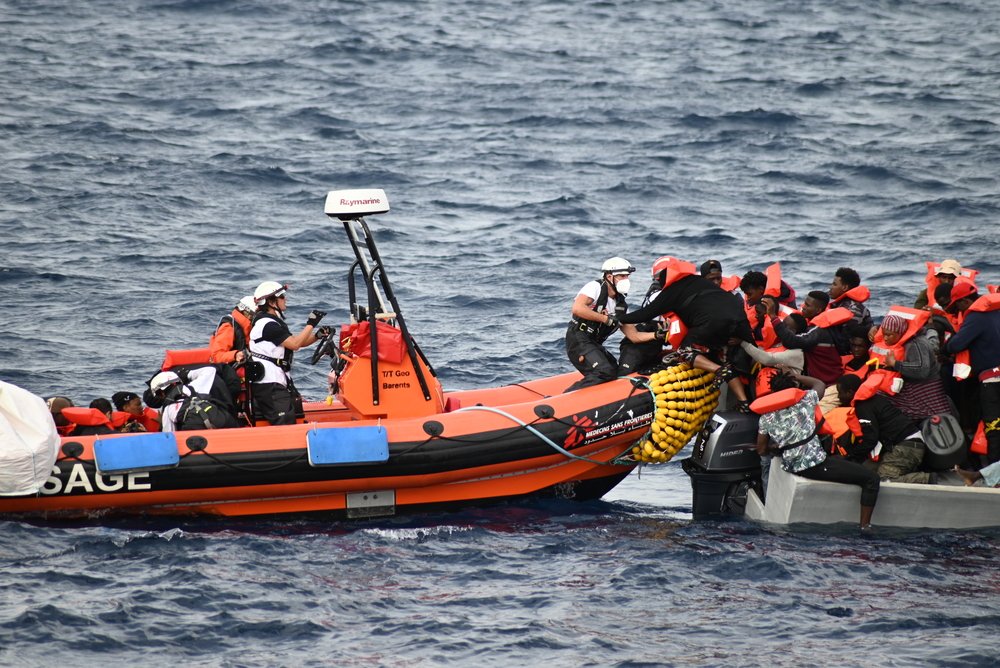 Candida Lobes/MSF
After a distress call from Alarm Phone, 99 survivors were rescued by the Geo Barents at approx 30 miles from the Libyan shores. (November, 2021).

When the Geo Barents reached the wooden boat in distress in the early afternoon, MSF teams rescued 99 people.

They found the bodies of 10 people on the lower deck, thought to have suffocated from fuel fumes.

The survivors told us that these people had spent more than 13 hours on the cramped lower deck of the boat. 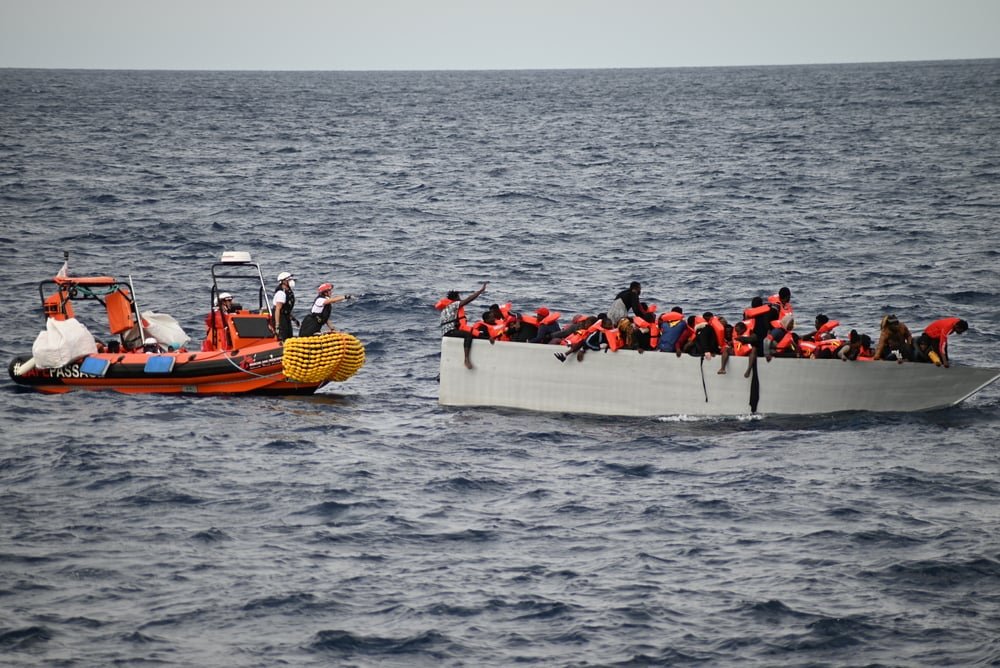 Candida Lobes/MSF
After a distress call from Alarm Phone confirmed by Sea Bird, the afternoon of the 16th of November, 2021, 99 survivors were rescued by the Geo Barents at approx 30 miles from the Libyan shores.

Some of the people on the boat had not realised what was happening to their friends or family members on the lower deck; others had to travel for hours next to the bodies of their fellow travellers.

Fear for their lives

Many of the people rescued that day have survived a series of traumatic events throughout their journeys, and their experience on the boat is only the latest.

Whatever the reasons that pushed them to leave their place of origin, and whenever they leave, there is always a common element in their accounts: the experience of violence, deprivations and the heart-wrenching fear for their lives and their loved ones. 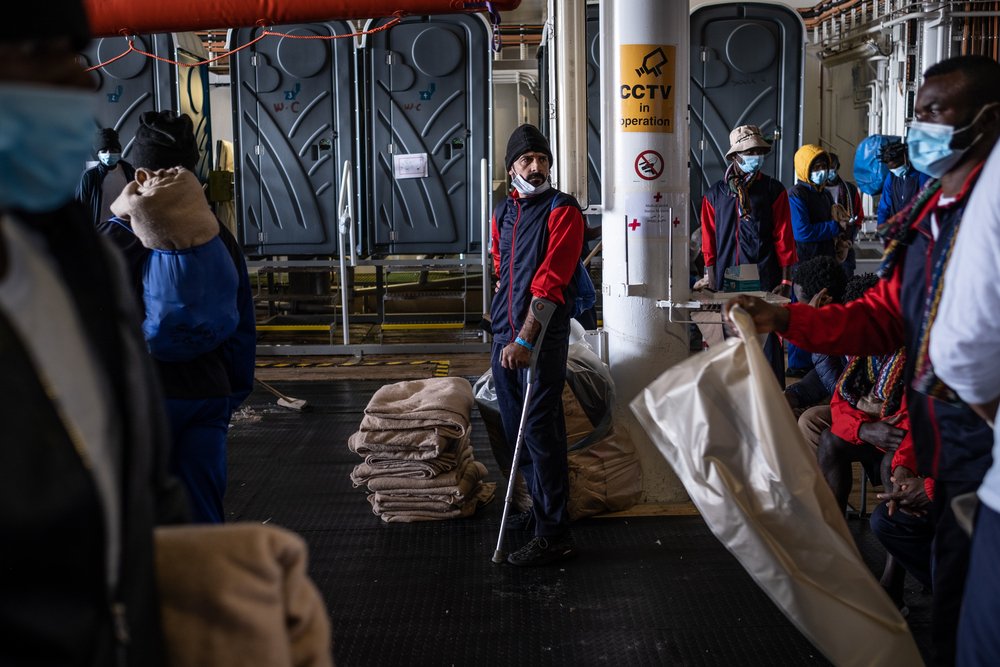 Virginie Nguyen Hoang
After MSF teams announced that they were assigned a port of safety in Messina, Sicily, survivors started to clean and tidy up Geo Barents' deck. Moustafa wasn't able to help due to his handicap. *Names were changed to protect their identity.

“I don’t have wishes for my life anymore, I just want a good life for my sons, I want them to be safe and I want them to finally have a good education,” Moustafa says, sitting in pain on the ground.

Moustafa has a metal internal fixator on his right leg that makes him limp. He says he has been in pain since 2011, when his leg was severely injured in Syria and the doctors needed to attach the fixator. 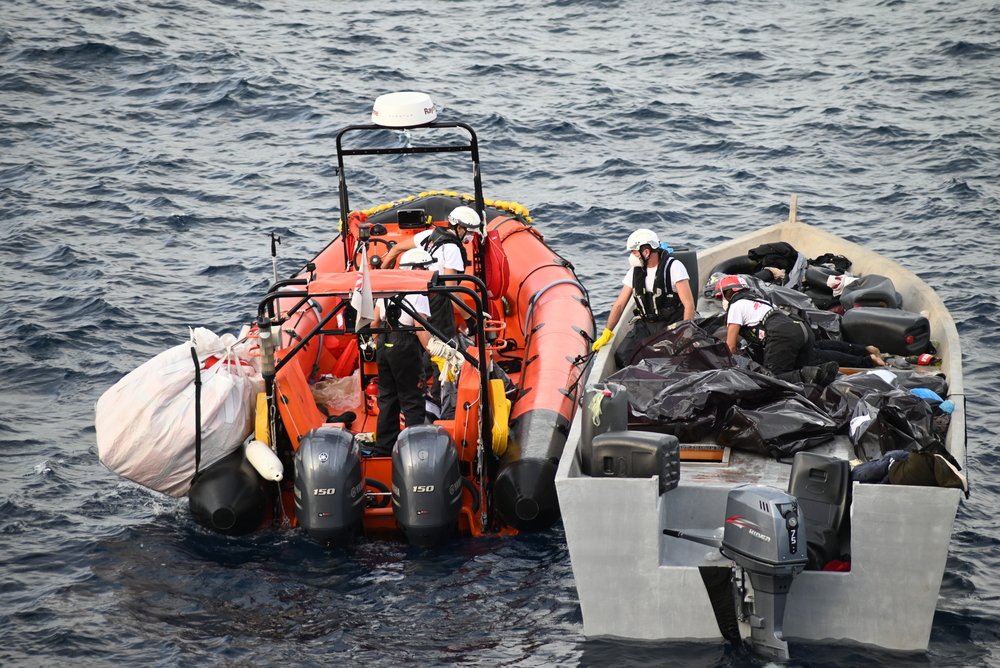 “[Armed men] came for me while I was in my shop. They locked the door, they repeatedly beat me with the butt of their rifles, and with whatever they found,” says Moustafa, showing me a long scar still visible on his head.

“I fell unconscious, they thought I was dead."

"A few hours later, I woke up in an empty street, behind some abandoned buildings, with a broken leg and covered in my blood.”

Moustafa is from Babbila, a southern suburb of Damascus that was under a four-year siege during the conflict in Syria, which started in 2011.

When the siege was lifted in 2015, he decided to flee the war with his three sons.

Ali was only one year old at that time. Their journey has been long and difficult since: the family spent almost a month in Sudan and then they moved to Egypt, where their living conditions were tough. 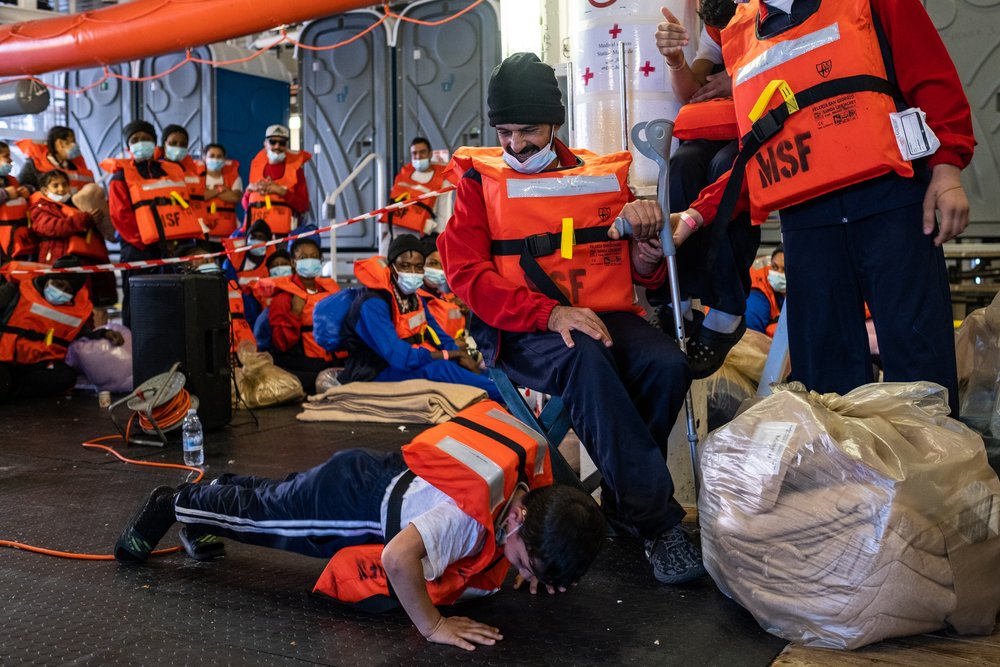 Virginie Nguyen Hoang
Ali, Moustafa's youngest son, doing some push ups in front of his father and brothers, while waiting for disembarkation on November 19, 2021.

In September 2021, jobless and with only expired passports, Moustafa made the difficult decision to go to Libya and attempt to cross the Mediterranean.

He hoped to give his sons at least a chance to attend school. The family crossed the border from Egypt to Libya; they went through Benghazi and Tripoli, then to Sabratah and Zuwara to find the boat from which the Geo Barents rescued them.

It is hard for me to comprehend that a child like Ali, with his incredibly gentle smile and his kindness, has spent his whole life fleeing.

It is impossible for me to accept that a caring father was left with no other choice than to risk his sons’ lives on a boat in the Mediterranean just to let them attend school safely. 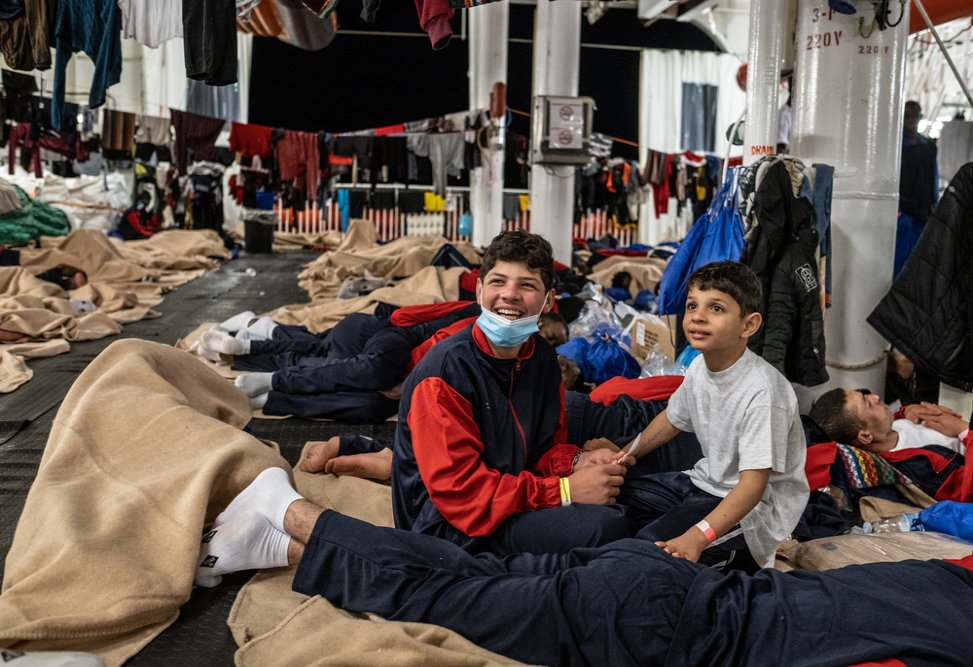 Virginie Nguyen Hoang
Hassan, 13 years old, and Ali, 7 years old, are happy to be on the Geo Barents after spending more than 13 hours in a wooden boat adrift in the Libyan SAR zone, before being rescued by MSF SAR teams, on November 16, 2021. *Names were changed to protect their identity

This is the shameful reality unfolding at European borders, where irresponsible and reckless migration policies condemn people like Moustafa and his family to risk their lives.

Since launching search and rescue activities in 2015, MSF has sent medical teams on board eight rescue ships at times operating the vessels in partnership with other organisations. Overall, MSF search and rescue teams have assisted more than 82,000 people. The Geo Barents is the current MSF-chartered search and rescue vessel and started operations in May 2021. A total of 1,345 people were rescued by the MSF team on board the Geo Barents between May and November 2021.