The heavy monsoon rains that started in June have inundated more than one third of Pakistan, with the death toll now over 1,500. It is thought that over 33 million people have been affected, and that it could take months for the floodwater to recede. Infrastructure and homes have been destroyed, and some people do not have access to shelter, food or clean drinking water. Some villages remain cut-off from outside help. The government of Pakistan has asked the international community for support in dealing with this large-scale humanitarian crisis.

A summary of MSF's response so far 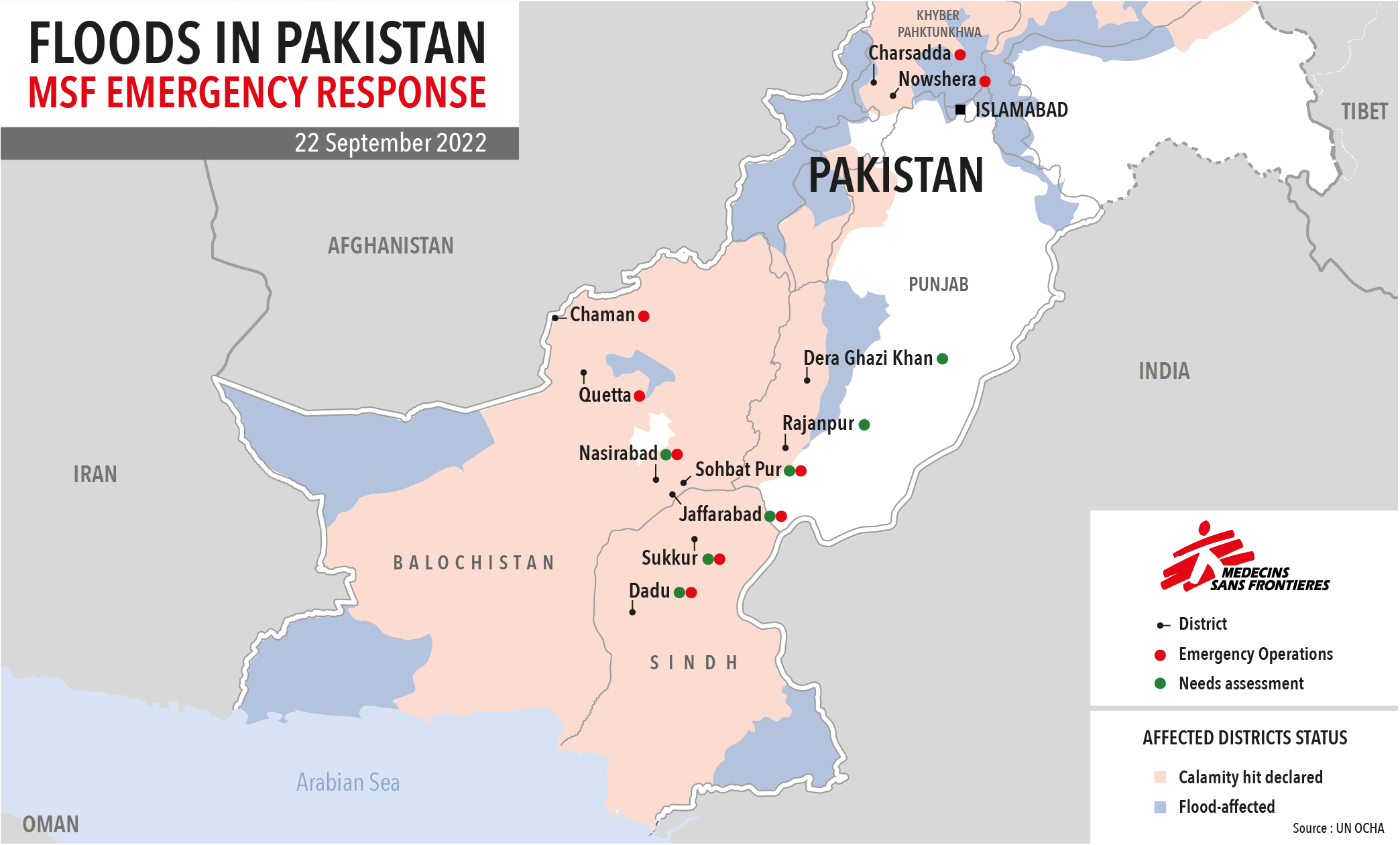 A map showing the regions affected by flooding.

Our teams are running two mobile clinics with outpatient consultations in Dera Murad Jamali (DMJ) and Dera Allahyar in districts Naseerabad and Jaffarabad respectively. Most patients are presenting with malaria, fever, skin diseases, diarrhoea, and eye infections. To-date, 7,000 people have received medical care. In Chaman, over 450 people have had medical consultations and in Quetta, over 800 outpatient consultations have been provided. Most of these patients have respiratory infections, or acute watery diarrhea (AWD).

Akeela, an Outreach Counsellor with MSF since 2020, lived in the village of Mir Gul Hassan Manju Shori Barun Naseerabad which is around 5 kilometres from Dera Murad Jamali (DMJ) in Balochistan, one of the areas hardest hit by monsoon rains and extreme flooding that left one third of Pakistan underwater. After losing her home, she is now responding to the emergency on the front line.

We have started running two mobile clinics in the Dadu district of Sindh and have so far provided primary medical care to over 1,500 people mainly with skin diseases, malaria, and diarrhoea. Using boats, our teams are still assessing the medical needs in nearby remote villages that have been cut off by the floodwater. Teams have also been providing over 20,000 litres per day of clean drinking water to people taking shelter at different camps in Dadu district. More water trucks are being arranged to reach the wider population.

In the north of Sindh province, assessments are being done in Sukkur city, and MSF’s water and sanitation teams have already started providing clean drinking water. We have installed water tanks with a capacity of 24,000 litres, which are being refilled on a daily basis. Over 200,000 litres of water have been provided to displaced people taking shelter in Labour Colony flats and Lab-e-Mehran camp in Sukkur district. 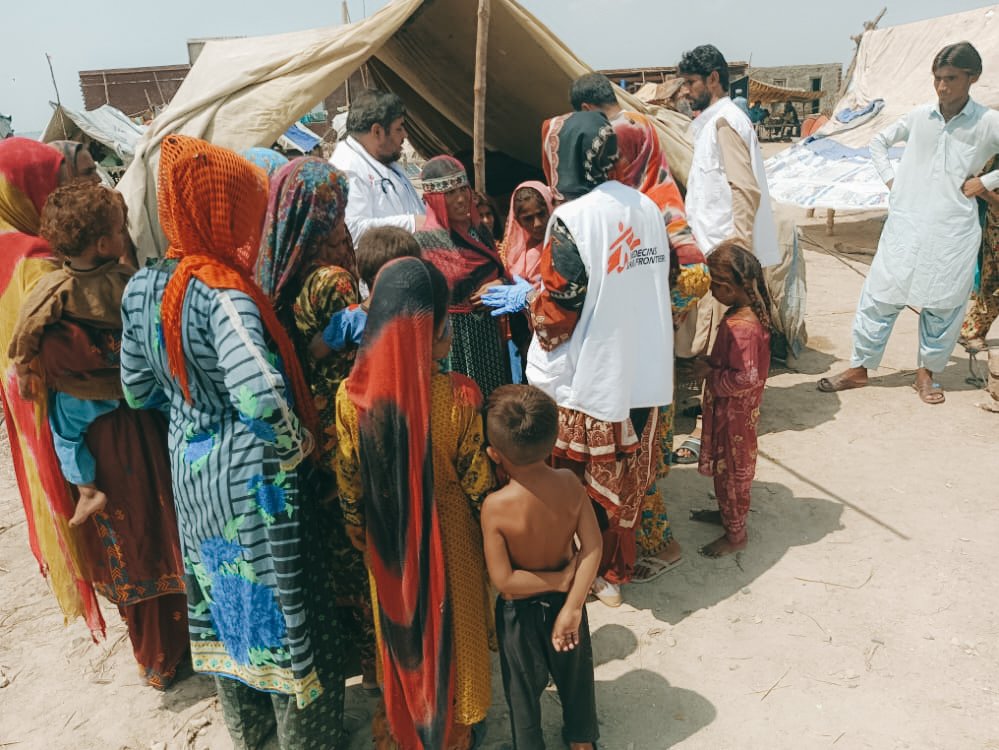 An MSF health promoter is conducting a health session on mother and child health at an IDPs camp in Dera Murad Jamali administration/district.

MSF launched three mobile clinics, in Sara sang, Bela and Miaonlay villages in Charsadda district, villages located next to riverbanks. The houses in these villages have been partially or completely destroyed, and villagers are now facing outbreaks of water-borne diseases. In the last week, the medical teams have seen 983 patients with respiratory tract infections, eye infections, acute diarrhoea, severe skin infections and chronic diseases. The teams have distributed non-food items (NFIs), including hygiene and kitchen kits, mosquito nets and insect repellents to over 600 families in the three villages. Water and sanitation needs have been identified and water storage tanks will be installed in the villages so that people can access clean drinking water.

We are soon going to start emergency operations in the Nowshera district after assessments by medical and water and sanitation teams.

Our emergency response teams have identified high needs when it comes to access to primary healthcare and the provision of safe drinking water in southern Punjab.

Many areas are still flooded and it may take time for water levels to come down. MSF is looking into starting emergency response activities in different locations of Rajanpur, Punjab.