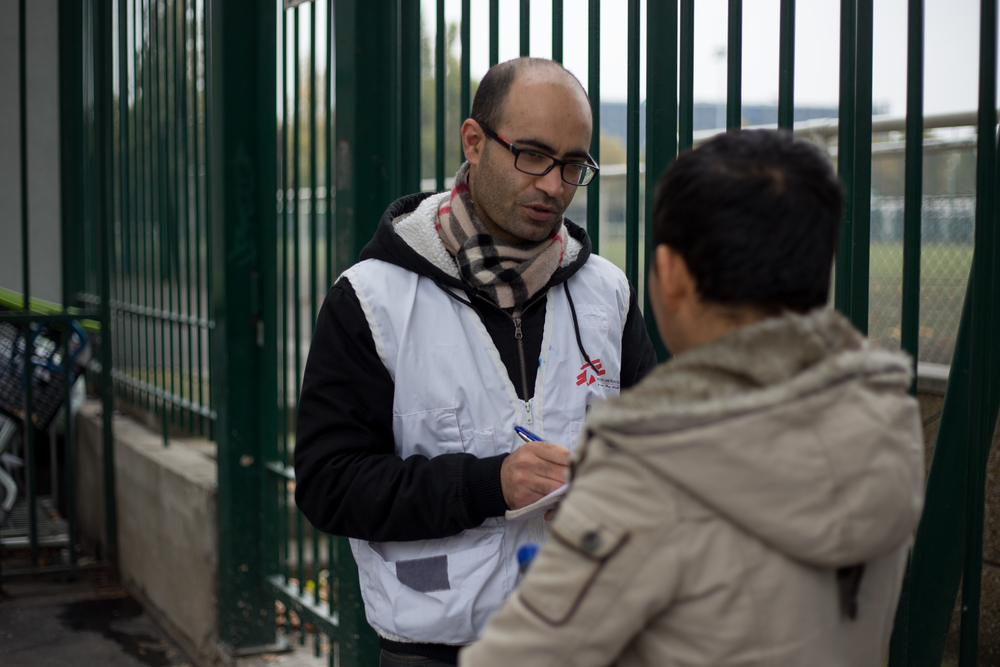 On 27 July 2017 French President Emmanuel Macron said he didn’t want to see any men or women on the streets by the end of the year.

Yet as temperatures drop and winter approaches around 1,000 refugees and migrants are still sleeping rough on the streets of Paris today. They are mainly scattered across the north east of the city and the borough of Seine-Saint-Denis (source Médecins du Monde).

Refugees and migrants try to find shelter in locations where they are hidden from authorities yet also close to the reception centre for migrants (‘Centre de Premier Accueil’) at Porte de la Chapelle.

At the reception centre migrants can start their asylum application and organisations providing support to migrants have also established themselves around the centre.

The situation has become considerably more difficult for migrants in Paris since the destruction of camps on 18 August 2017 where more than 2,700 people were living around Porte de la Chapelle. 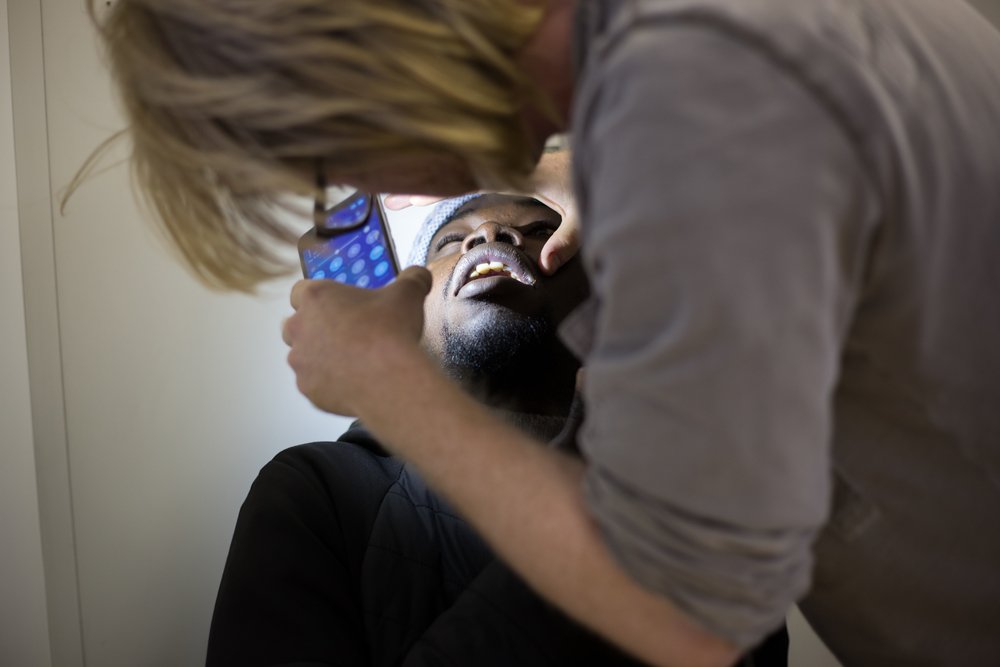 MSF
Medical consultation with Basheer, a 29-year-old man from Sudan who arrived in Paris a few days ago

“The rain and the police make it unbearable here. The rain forces us to huddle under bridges and once we’ve set up shelter the police turn up and tell us to move on.

"I don’t have any other option but to claim asylum here. In Sudan there is only death."
IBRAHIM SUDANESE REFUGEE

think the treatment would be the same in France. Here we have nowhere to sleep.

As soon as we sit somewhere the police arrive and tell us to move. In the middle of the night they wake us up and make us move. Each time we ask them ‘Move on, but where to? Where can we go?’ Every time they tell us ‘I don’t know, just leave’. I don’t have any other option but to claim asylum here. In Sudan there is only death.”

Invisible to the local population and isolated on the streets of Paris, access to basic healthcare and services is becoming more and more difficult for the migrants.

Every day, in our clinics and through assessments on the streets, our medical teams see the health of migrants getting worse. This is especially true now that winter is approaching and they have no chance of getting access to proper shelter. 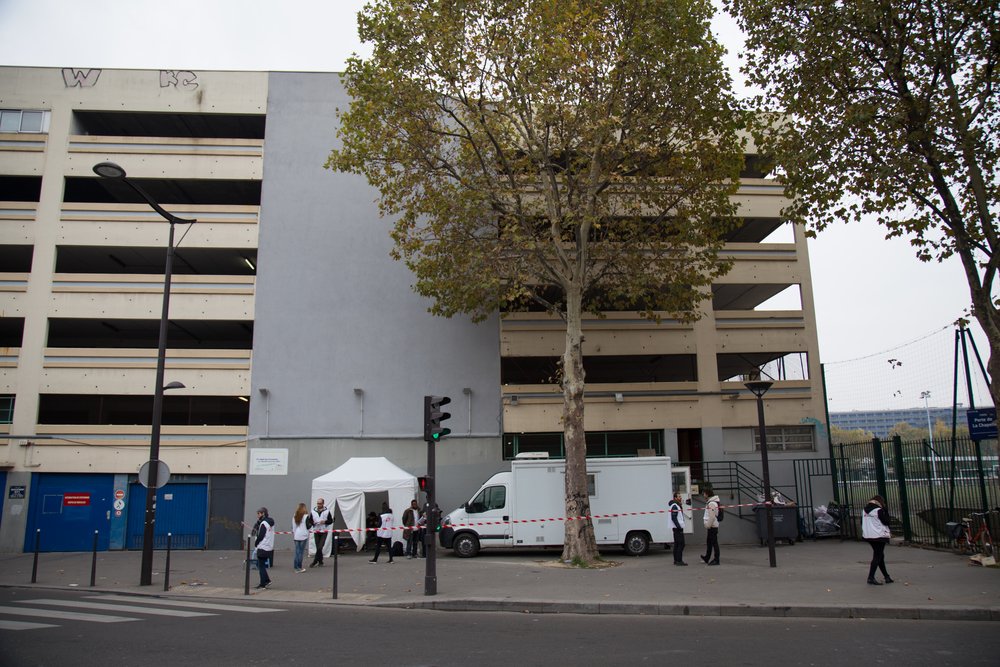 “The temperature has dropped and migrants are still living on the streets without a housing solution. They’re not even allowed to wash themselves outdoors any more.

Their only solution is to use public facilities but they often have to pay for these and sometimes they’re are turned away. Because of the terrible conditions they face there is a real risk of an increase in skin infections and outbreaks of scabies.

The policy of making it difficult for refugees and migrants to claim asylum, constantly moving them on, sits alongside a severe lack of information available to them. This makes people who are already very fragile, often having gone through a traumatic journey to get to Paris, even more vulnerable.

The French state is trying to deny refugees and migrants their basic needs instead of creating an environment where they are welcomed as people with dignity and respect.”

"As winter arrives, this is not the time to pay lip service to this issue"
DR FRANCOISE SIVIGNON PRESIDENT OF MÉDECINS DU MONDE IN FRANCE

Jemal, from Ethiopia, has been in Paris for one month. He says:

“This situation is absurd and I’ve known refugee camps in Africa. There the UN camps can be chaotic and precarious, but at least most of the time we have a tent, something to eat, access to information and we are safe. Here the only information we get is rumours and the police persecute us as if we were criminals.” 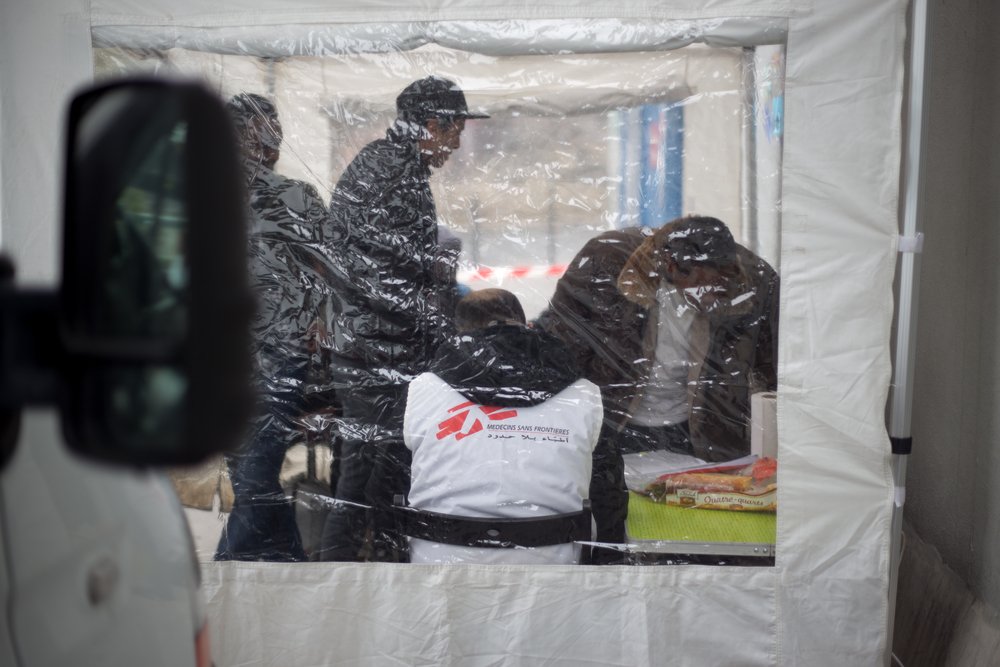 MSF
Patients wait in a tent to be seen by a doctor in the mobile clinic.

MSF and MDM are calling for immediate and unconditional access to humane shelter for refugees and migrants as well as the end of police harassment.

“As winter arrives, this is not the time to pay lip service to this issue. Migrants urgently need access to shelters and we need to see the opening of more reception centres soon.

It is essential that migrants are protected and get the tailored support they need. Public authorities must act as quickly as possible.”