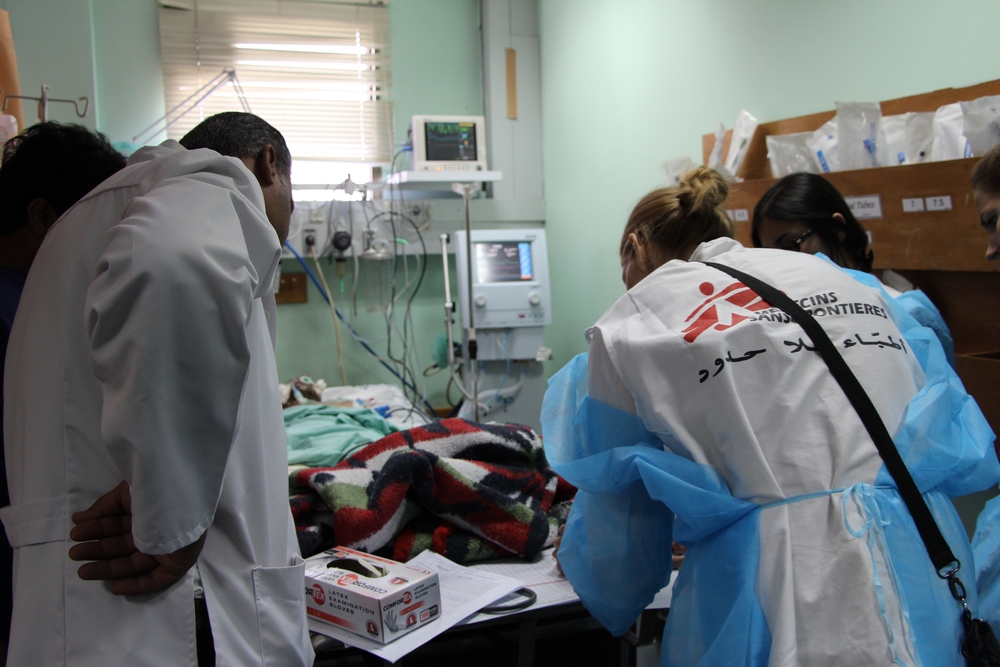 This latest bombing of a health facility, where thousands of people have taken refuge since Israel launched its Operation Protective Edge three weeks ago, demonstrates how civilians in Gaza have nowhere safe to go, and shows the difficulties of providing emergency aid in Gaza.

One MSF international staff member was in the building when the outpatient department of Al Shifa hospital was bombed. While no one was injured in this latest attack, it is the fourth hospital in Gaza to have been hit since 8 July, the others being the European General hospital, Al Aqsa hospital and Beit Hanoun hospital.

“Targeting hospitals and their surroundings is completely unacceptable and a serious violation of International Humanitarian Law,” says Tommaso Fabbri, MSF’s head of mission in the Occupied Palestinian Territories.

“Whatever the circumstances, health facilities and medical staff must be protected and respected. But in Gaza today, hospitals are not the safe havens they should be.”

One hour after Al Shifa hospital was attacked, a rocket strike hit Shati refugee camp. The injured – most of them children – were brought to Al Shifa. “Two thirds of the injuries I've seen arriving at Al Shifa have been children,” says Michele Beck, MSF’s medical advisor in Gaza. 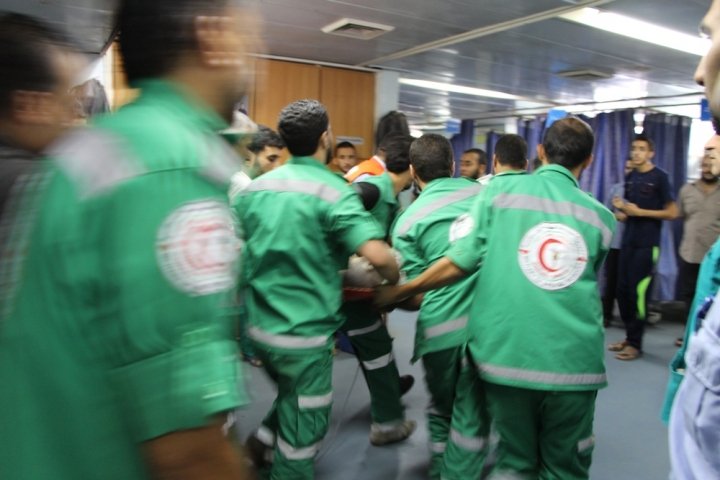 In the past three weeks, local ambulances and Red Crescent paramedics have been killed and wounded.

No freedom of movement

In the Gaza Strip, 1.8 million people, including more than 160,000 displaced people, live in a narrow, densely populated strip of land. “Gazans are hemmed in by the sea and closed borders,” says Marie-Noëlle Rodrigue, MSF’s director of operations.

“When the Israeli army orders civilians to evacuate their houses and their neighbourhoods, where is there for them to go? Gazans have no freedom of movement and cannot take refuge outside Gaza. They are effectively trapped.”

For medical and humanitarian organisations in Gaza, such as MSF, working and moving around is extremely difficult and dangerous. In the past three weeks, local ambulances and Red Crescent paramedics have been killed and wounded.

On 20 July, there was an airstrike just a few hundred metres from a clearly identified MSF car. On the same day, a missile fell – but failed to explode – some 10 metres from an MSF tent set up in the compound of Nasser hospital, in southern Gaza.

In the past three weeks, MSF teams have only been able to reach Nasser hospital on two occasions. MSF has been forced to suspend its surgical activities in the hospital, despite the significant medical needs in this severely hit area, where most of the wounded are women and children.

“We have a surgical team ready to work in Nasser hospital, but without firm and credible security guarantees from both parties to the conflict, we cannot risk sending them,” says Nicolas Palarus, MSF’s project coordinator in Gaza.

For aid organisations, getting staff and medical supplies into Gaza is proving extremely difficult. The Rafah crossing, from Egypt, and the Erez and Kerem Shalom crossings, from Israel, are partially open, but there is a risk of bombings and collateral damage. “The population is being held hostage, with almost nothing and nobody going in or out,” says Marie-Noëlle Rodrigue.

Because of intense shelling, the sick and wounded are also finding it difficult to reach hospitals. Half of Gaza’s health centres are not functioning. In Gaza City, home to some 800,000 people, just four out of 15 health centres are open.

“Beyond the emergency, basic medical needs such as maternal healthcare and the management of chronic diseases, as well as access to drinking water and food, are simply not being provided,” says Nicolas Palarus.

In response to the current emergency, MSF is supporting Al Shifa hospital in Gaza city with a full surgical team and emergency medical equipment. MSF has made donations from its emergency stocks to the central pharmacy for the north and south of the Gaza Strip.

MSF’s post-operative clinic in Gaza is running at only 10 to 30 percent of its capacity due to the intensity of the bombing, which is preventing patients from reaching the clinic. MSF’s regular activities in Nasser hospital, Khan Younis, have been interrupted by the conflict.

MSF has been working in Gaza for more than 10 years, providing medical, surgical and psychological care; its teams also responded to the emergencies in 2009 and 2012.