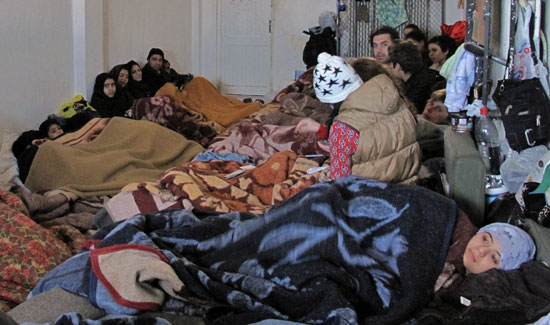 “The Greek government should immediately improve living and hygiene conditions in the border police stations and detention centres for migrants and asylum seekers in Evros region,” said the international medical humanitarian organisation Médecins Sans Frontières (MSF) today. Every day men, women, and children -  including pregnant women and unaccompanied minors - are experiencing a cruel and inhumane reality that has serious implications for their physical and mental health.

For the last two months, MSF teams have been providing medical care to detained migrants and asylum seekers inside three border police stations and one detention centre in the Evros region of northern Greece. In this time, the MSF teams have witnessed a situation that can only be described as unbearable and inhumane.

“No human being should be subjected to such treatment,” said Ioanna Pertsinidou, MSF’s emergency coordinator. “Every day we are seeing people who are obliged to stay for weeks or even for months in extremely overcrowded and squalid cells, without the right to go out in the yard. There are so many people detained that they don’t have the space to even lie down in the cells, while the heating often does not work, leaving migrants freezing in sub-zero temperatures. In one of the detention centres, the toilet often does not work and excrements flood sections of the cell where migrants live and sleep."

Impact on physical and mental health

This situation has serious implications on the physical and mental health of the migrants. In the border police stations of Soufli and Tychero, MSF doctors have treated more than 850 patients mostly suffeing from respiratory infections, gastrointestinal problems and skin infections, caused by the poor living conditions.

The situation is further aggravated by the sub-zero temperatures in Evros. In recent weeks, several people died because of the cold weather, while trying to cross the border. Others have arrived in a serious medical condition. In the first week of 2011, MSF doctors provided care to 15 migrants who had managed to cross the border and were suffering from frostbite.

MSF is calling for immediate action, and for the Greek authorities to respond to the emergency medical and humanitarian needs of the detained migrants and asylum seekers in Evros. “The situation we are witnessing poses major humanitarian concerns; the Greek government should immediately put in place a coordinated emergency response to improve the reception conditions at the border and the living conditions in detention facilities,” says Ioanna Pertsinidou.

Measures that enhance border controls, such as the creation of a fence at the border and the deployment of FRONTEX teams, should not be considered a viable response. Migrants and asylum seekers who are escaping conflict and violence, deprivation or human rights’ violations, will continue trying to enter Europe. Restrictive measures will only force them to risk their lives on longer, more hazardous journeys, and will leave them vulnerable to falling prey to trafficking or smuggling networks. The European Union’s increasingly restrictive asylum and migration policies are putting in danger the lives and well-being of the migrants, and particularly vulnerable groups such as women, children and unaccompanied minors.

MSF has been providing medical care and psychosocial support to migrants and asylum seekers since 2008 in Greece. Since the beginning of December 2010, MSF teams have been providing healthcare and working to improve living and hygiene conditions in the border police stations of Tychero, Soufli and Feres and in the Detention Centre of Filakio. MSF doctors have treated more than 850 patients; they have referred 15 patients to local hospitals and have distributed 3,500 sleeping bags and 2,500 personal hygiene kits.